Every college football team is overrated

Especially the teams you -- yes, you -- root against.

Share All sharing options for: Every college football team is overrated

Preseason rankings are stupid, and we all care about them. Let's just agree on those two things right up front.

There is no good reason for them, they muddy up the first half of the season, they're based on nothing but resounding speculation and wanting to say nice things, and rankings are social constructs. Couldn't agree more. And we all care.

That said, you are correct that this year's rankings are especially stupid. Can you believe how highly ranked your rival is? And can you believe how much love they're giving that team that got blown out in that big game? Neither can I.

Here's your annotated guide to something like what 2015's preseason top 25 looks like. This isn't my top 25, because mine would correctly rank your team and expose your rivals as trash. Every team is bad and overrated, especially the ones you don't like.

I used an emoji code (key below), because it's not even worth explaining in detail how overrated and bad all of these teams are. 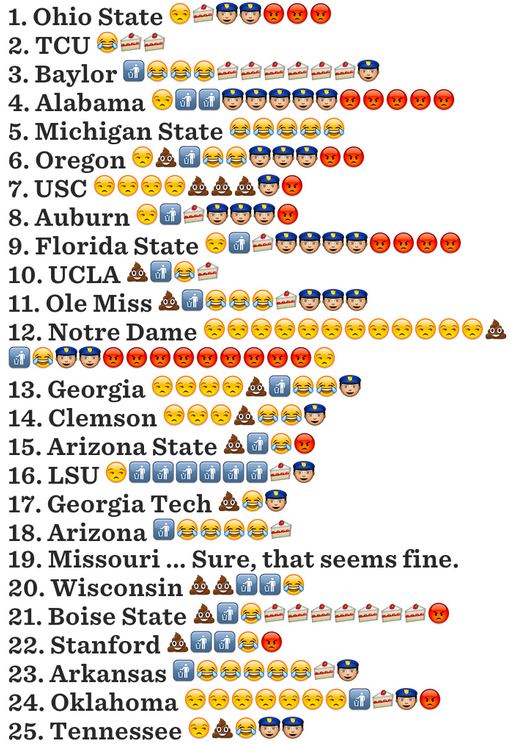 Concerns with coaching/strategy/etc., concerns that are probably overblown

Ain't never won nothing (i.e., hasn't won 100 championships in the last week or so)