All the 'hacked' posts on Michigan's official Facebook pages, ranked by Likes

Someone took over official Michigan pages. How'd it go?

Share All sharing options for: All the 'hacked' posts on Michigan's official Facebook pages, ranked by Likes

Something bad happened to several of Michigan's athletics Facebook pages.

Some would refer to it as an act of hacking, which used to mean someone typed into the trodes and spliced mainframes to deliver a package of warez into AT&T's servers. Apologies for technical language. Just as likely, someone in charge clicked on some wrong thing and gave power to someone who would use that power to make unexpected posts.

Here are those, as they were before removal, ranked by Likes. They get NSFW. 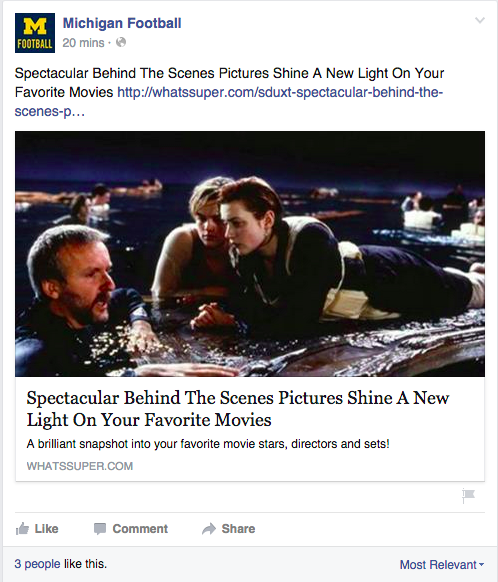 Yes, this one's only had 30 minutes to get off the ground, but it's not going anywhere anyway. Without telling me which movies are involved, I'm not clicking and definitely not Liking. You should use a picture from a much more well-known movie, first of all, because no one has seen this Nordic surfing movie you're leading with.

Strikes too close to the bickering between 1990s Michigan stars Jalen Rose and Chris Webber.

Oh yeah, there are extremely weird ones. Here's one now.

Why didn't this one work? LOL, there are no fascinating facts that Michigan fans don't already know.

If you've ever had to steady a drunk person who's wearing heels because his or her heel has become lodged in a grate or slat or vent or ridge or what have you, you understand the need for a sign such as this.

Only '70s show we acknowledge is Bo Schembechler's.

SB Nation presents: The best Jim Harbaugh moments since he took over at Michigan

I do not have anything to say about any of these. They all did fine, considering.

HISTORICAL FIGURES ON A BOAT OH IT'S LIT

I think this is the one that will pop up on Twitter whenever Michigan does something bad at football this season, as if to say, "Keep your chin up, Wolverines. Life isn't all punts. There are tattooed moms out there, and they are beautiful! You might know one or be one someday, or maybe you already are, so Go Blue!"

Also, the WOW is pointing at, what, her ankle or pinky finger? I've seen some sick, sick shit tattooed on pinky fingers, man.

This one probably did fine because it was one of the first ones and it Seems Like Sports.

Yeah, it's basically all the same thing from here on out.

This is the most Michigan butt since Jake Butt himself.

That yellow thing in the top right corner means this is pinned up top. Kim Kardashian is pinned atop Michigan's Facebook pages. Let's not lose sight of how unusual this is, in case any of this has started to seem normal to you.

The lone true success is pretty sexist. You could probably change "women" to "people" without changing any sensible list all that much.

I am disappointed in this piece of content, considering it came from such a prestigious institution as the University of Michigan.