Vols will be SEC contenders in 2016. Oklahoma will test whether that includes 2015, too

Saturday (6 p.m. ET, ESPN), a big non-conference game will tell us a lot about how far Butch Jones' Volunteers still have to go.

Share All sharing options for: Vols will be SEC contenders in 2016. Oklahoma will test whether that includes 2015, too

The No. 23 Tennessee Volunteers have momentum right now because of success on the recruiting trail. Over the last two signing periods, 32 of Tennessee's 59 signees have been rated four- or five-stars. Almost all of the hype surrounding a program that hasn't won an SEC championship in 16 years is directly related to the Vols beating programs like Alabama and Georgia off the field.

Recruiting like this suggests that Tennessee will be very good. The question is how soon?

The Vols' first real shot to announce themselves to the nation is this weekend in Knoxville as the No. 19 Oklahoma Sooners come to town. The game is basically a pick 'em in Vegas, and many believe the Vols have a shot.

Looking at Oklahoma's recruiting over the last two classes, it is clear that the Vols have brought in better talent, as the Sooners have signed just 35 percent blue chips in 2014-15 against Tennessee's 54 percent.

But two classes do not a team make. 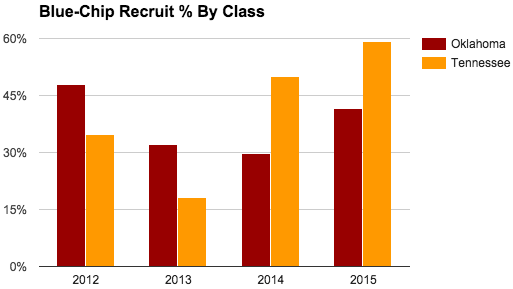 And while Tennessee has out recruited the Sooners over the last two classes, Oklahoma beat the Vols on the trail in 2012 and 2013. Those players are now juniors and seniors. Tennessee's best talent is in its underclassman ranks.

The Volunteers list three seniors and eight juniors in their 23-man starting lineup, while the Sooners list seven and eight. For Tennessee to beat Oklahoma, some of its young talent is going to need to step up in its first truly big game.

Among other things, that means its pair of five-star freshman defensive tackles, Shy Tuttle and Kahlil McKenzie, as fine a duo of tackle recruits as any school has signed in recent memory, need to spell starters Kendal Vickers and Owen Williams, the latter of whom is starting only because normal starter Danny O'Brien is suspended. The Vols will also need sophomore Josh Malone and freshman Jauan Jennings to make some one-on-one plays.

Tennessee will have to take advantage of Oklahoma's few spots of youth, notably at offensive tackle, where the Sooners start a redshirt and a true freshman in Orlando Brown and Dru Samia. This could happen, as one of the strengths of this Tennessee team is defensive end, with superstar sophomore Derek Barnett and solid junior Corey Vereen. They'll need to harass Baker Mayfield enough to cover for a secondary that allowed 433 passing yards to Bowling Green in Week 1.

This would be a huge win for the Volunteers, as the Vols have only one win over a ranked team under Butch Jones, in 2013 over South Carolina, after which Tennessee would go on to lose its next four. The Vols as a program haven't beaten a ranked non-SEC team since 2007.

Tennessee is just 1-11 against ranked teams under Jones, but history says that if the Volunteers keep recruiting at their 2014-15 level, Rocky Top will soon be among the top contenders. If its young talent can play beyond its years, it might start Saturday against the Sooners.

Oklahoma's comeback shows it's everything Tennessee still wants to be