Auburn has 3 fixable problems, but there's no time to waste. LSU's up next.

The preseason SEC favorite almost lost to FCS Jacksonville State. Here are three things the Tigers must fix in a hurry, with their conference schedule starting in five days.

Share All sharing options for: Auburn has 3 fixable problems, but there's no time to waste. LSU's up next.

Rarely does a win damage you as much as a loss, especially in a poll system designed to move you up when you win and move you down when you lose. But the SEC media's conference favorite and the AP Poll's preseason No. 6 team, Auburn, now finds itself 18th.

Such is life when you nearly lose to an FCS team. Jacksonville State is one of the best FCS teams, mind you, but Auburn nearly suffered college football's biggest upset since Appalachian State took down No. 5 Michigan in 2007's opening weekend.

The Tigers survived, 27-20, thanks to a touchdown in the last minute of regulation and a defensive stand in overtime. But things are not going according to plan. Why?

In 2013, Auburn ranked first in rushes of 10-plus yards (147 in 14 games) and first in rushes of 30-plus (23rd). In 2014, those rankings slipped to eighth in 10-plus, 23rd in 30-plus. Gus Malzahn's ability to create numbers advantages for his runners, combined with Auburn's stable of blue-chip ball carriers, has been a devastating combination.

It is early, but thus far Auburn has managed only eight rushes of 10-plus yards (91st in FBS), and the next rush of 30-plus will be the Tigers' first. There have been only two gains of 30-plus, period; that ranks the Tigers 98th, tied with Akron and Kent State among others.

Auburn is breaking in a new combination up front. The Tigers had to replace last year's center (All-American Reese Dismukes), right guard (Chad Slade) and right tackle (Patrick Miller); the three had combined for 118 career starts.

With the return of former blue-chipper Shon Coleman, tackle Avery Young and 2013 starter Alex Kozan, plus four-star sophomores Braden Smith and Austin Golson (an Ole Miss transfer), it appeared Auburn had plenty of talent up front and a non-zero amount of experience.

Then again, the line hasn't been the problem. Auburn's run efficiency has alternated awesome and decent; the Tigers had a 59 percent rushing success rate against Louisville and 45 percent against JSU; the national average is around 43.

One problem has been that the backfield has fallen apart. Jovon Robinson (a five-star junior college transfer) and Roc Thomas (a five-star 2014 freshman) got hurt against Louisville and combined for eight carries. Thomas returned for JSU but saw only 10 touches (he scored on a 51-yard touchdown catch but rushed eight times for only 22 yards and lost a late fumble), and Robinson didn't play.

Instead, Peyton Barber has become the leader. He had 24 carries for 115 yards in helping the Tigers run out the clock against a charging Louisville; against JSU he had 23 carries for 125 yards, plus a gritty nine-yard reception on third-and-9 in overtime. Barber has proved capable of navigating in tight spaces, but he hasn't showed serious burst. 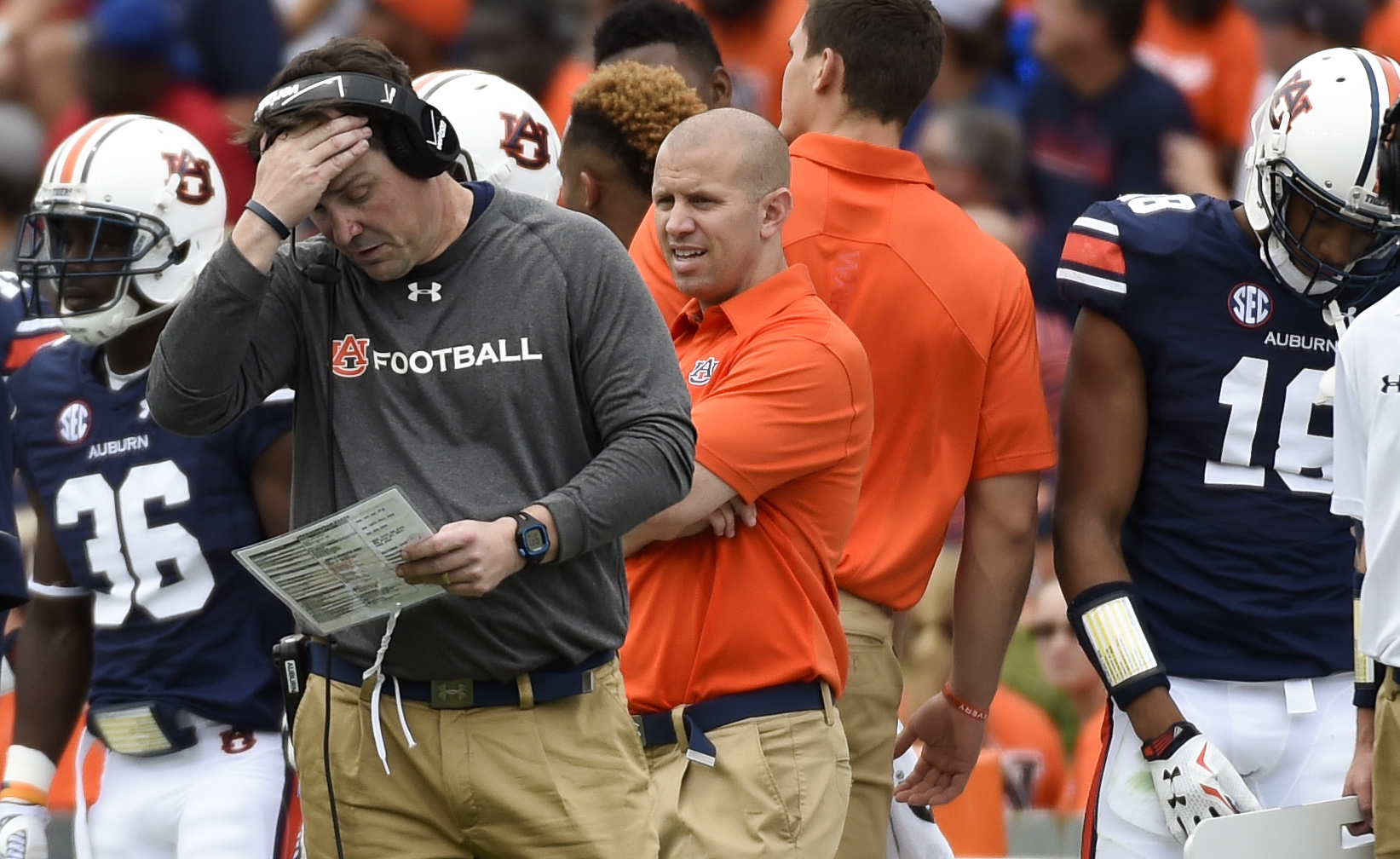 For the most part, Auburn's defense is fine. "Fine" isn't good enough for new defensive coordinator Will Muschamp, but it still marks improvement.

Louisville averaged only five yards per play, and JSU managed 4.9. Considering the national average hovers around 5.7, that's great. But while the Tigers have prevented big plays, efficiency issues are obvious.

Dual-threat quarterbacks have been able to keep Auburn's edge defenders on their heels. Louisville's Lamar Jackson completed nine of 20 passes while splitting time with Reggie Bonnafon, but he rushed 15 times for 111 yards. JSU quarterback Eli Jenkins' sleight of hand on the zone read was a major weapon. Excluding sacks, Jenkins gained only 59 yards in 16 rushes (3.7 per carry), but his decisions and some nice power blocking freed up Troymaine Pope and Josh Clemons to gain 121 yards in 25 carries (4.8).

JSU's longest run was for 18 yards, but the ability to avoid negative plays (Auburn had six tackles for loss in 89 snaps) allowed the underdog Gamecocks to control the football. JSU's time of possession was 36:23, and Auburn managed only 70 snaps.

For as well as Auburn has recruited, depth up front was a major concern heading in. The Tigers did return tackle Montravius Adams and ends Gimel President and DaVonte Lambert, but the rest of last year's two-deep was gone. With President struggling and sophomore end Carl Lawson out because of a hip injury, Muschamp has had to lean on newcomers. That doesn't often work. Four-star JUCO transfer Maurice Swain has 0.5 tackles so far; blue-chip freshman Byron Cowart has one. Redshirt freshman Dontavius Russell (7.5 tackles, 2.5 for loss) has been as advertised, but he's the only one.

3. No mojo for Jeremy Johnson

Two games into his tenure as Auburn's starting quarterback, Johnson has yet to take a sack and is completing a healthy 60 percent, albeit at only 11.7 yards per completion. But of his 21 non-completions, 52 percent have been defended (33 percent is usually the national average). And of the 11 defended, 45 percent have been intercepted (22 percent is the average).

That's unlucky, but Auburn cannot let opponents get their hands on passes that frequently. This suggests a combination of poor separation for receivers and poor decisions/accuracy from Johnson.

Johnson started aggressive against Louisville, but with little payoff. He overthrew Ricardo Louis on a 40-yard bomb in the first quarter, then was picked off on a 45-yarder in the second. That appears to have made him gunshy, settling for shorter passes in cluttered areas. A couple of long shots would do wonders for his confidence.

Of course, so would a better connection with Duke Williams. The preseason All-American has caught only 5 of 10 passes for 62 yards. They've been important -- four have gone for first downs, and three have come on passing downs -- but far more production was expected.

Also ... Auburn, of all teams, has been unlucky

Opponents have fumbled seven times so far, but Auburn has recovered only one. Combined with Johnson's seemingly bad luck, the god of bounces hasn't been kind to the Tigers. (Those who remember 2013 might call this fair.)

Based on fumbles and the ratio of INTs to passes broken up, Auburn's expected turnover margin so far has been plus-2.3. Auburn's actual turnover margin has been minus-3, a difference of 5.3. Turnovers are worth about five points on average, so you could say turnovers luck has cost Auburn about 13 points in each game so far.

Granted, Auburn's lone fumble recovery was huge. The ball squirted out of a potential pile and into the hands of linebacker Justin Garrett, who returned it for 82 yards and a touchdown, in a game decided by one score.

The good news? Most of this is fixable, and luck tends to even out. If running backs get healthy, the offensive line jells and a healthy Lawson and newbies like Swain and Cowart begin to produce, Auburn could resemble the team it was supposed to be.

The question is how much damage will be done before these nos turn into yesses. Malzahn's Tigers visit Baton Rouge this Saturday, then draw  Mississippi State. This Auburn would be lucky to survive those games. A tuned-up Auburn would be expected to win both.

If you can keep your goals on the table, you can grow into yourself. Early in Auburn's 2010 championship run, the Tigers nearly lost to Clemson and Kentucky teams that finished 6-7. Early in the runner-up campaign of 2013, it was the same story against Washington State (6-7) and Mississippi State (7-6).

Both of those teams improved in October, then hit fifth gear in November. Saturday's win most resembled another near miss -- the 42-38 win over Utah State in 2011, Malzahn's final season as offensive coordinator. Auburn did win eight games that year, but fans were thinking much bigger than that two weeks ago.