Thank goodness there are too many bowls, huh? After an excellent undercard, the main-event bowls were mostly one-sided.

Share All sharing options for: New Year's Day was for bowl blowouts and glimpses of 2016 hype

Man oh man, is Tennessee going to be drastically overrated next year...

Bowls are unreliable sources of information about the next season. But we can't help ourselves. For the next eight months, we will lean on our last memories. [...]

I wrote that a year ago, when Tennessee was last ripping to shreds an overmatched Big Ten team in a bowl game. The Vols had wrapped up a weird season with a cathartic win, one that solidified a spot in the S&P+ top 25 despite a 7-6 record.

It became obvious by the second quarter of Tennessee's TaxSlayer Bowl romp last year that the Vols were going to end up on the "too much, too soon" hype train. They were going to begin in the top 15 and lose to some excellent opponents, and a top 25 finish was going to feel like a disappointment because the bar was set in the wrong place.

But then a funny thing happened: they didn't get overrated. The "no bowl bumps!" pushback seemed to take. Tennessee began ranked a modest 25th in the preseason polls. By the time my 2015 Tennessee preview rolled around, I had begun to think the Vols were actually UNDERrated.

The bar is set in a fair place for 2015. The upside is immense, but the Vols are a couple of injuries away from being too young to rise, and the schedule presents countless opportunities for breakthrough wins and discouraging losses.

It's going to be an interesting season in Knoxville.

Saturday, the Vols cleared a realistic bar and capped a nine-win season with a romp over Northwestern. They finish 9-4, and they will be ranked in the final AP poll. The last time they did either of these things: 2007, Phil Fulmer's second-to-last year on the job.

Running Fulmer out of town sent Tennessee into the wilderness for nearly a decade. 2015 was when the Vols reemerged.

Here's something else pretty funny:

If you're going to talk up Tennessee for 2016, do it b/c the Vols've been good all year, not b/c they're crushing a mediocre team on Jan 1.

The "Oh, here we go again" vibe was strong as Tennessee was pulling away from the Wildcats. But if anything, yesterday's romp might have provided a course correction. We wrote the Vols off after they stumbled against good teams this year, and we ignored that they had spent most of the last two months playing quite well. If the Northwestern win gives the Vols an offseason bump, it's fair, not because bowls are worth much, but because we should have been thinking more highly of UT to begin with.

That brings us to the most important date in Tennessee at the moment: Sept. 24. That's the day Florida visits Neyland Stadium. The Vols will have played a couple of decent teams by this point -- Appalachian State visits, then UT faces a retooling Virginia Tech at Bristol Motor Speedway on Sept. 10. But Florida was the recipient of one of Tennessee's late-game collapses in 2015, and they will provide the Vols with their first true redemption opportunity.

If they figure out how not to clam up late, they might be ready for one hell of a 2016.

Stanford wasn't always this good. Because we're all good at retroactively calling rankings/bowl pairings/Playoff selections awful, many of us have spent the last day or so bashing the committee's selection of Michigan State in the Playoff. The Spartans were clearly not deserving of a spot ahead of Stanford and Ohio State!

Some are also using Stanford's and Ohio State's Jan. 1 performances as proof that the sport needs an eight-team playoff. That seems a bit odd in a year in which the top two teams separated themselves from the pack.

If Stanford had more frequently looked like it did on Friday, the committee wouldn't have made that choice from the start. If this Cardinal offense had shown up in the loss to Northwestern, they would have entered the postseason 13-1. If this defense had shown up when Oregon came to Palo Alto, they might be 14-0.

There's no question that Stanford had a point to prove in Pasadena. The Cardinal played an almost perfect first half, jumping on Iowa from the opening snap and leading 35-0 at halftime. They gained 250 yards in 25 snaps, allowing 123 yards in 40. They scored on a long touchdown pass, a long punt return and a long interception return. No Hawkeye could lay a finger on Heisman finalist Christian McCaffrey. Iowa fans waited a long time and drove a long way for the Rose Bowl, and the game was over after 10 minutes.

McCaffrey finished an absurd season by rushing for 172 yards in 18 carries, and catching four passes for 105 yards. He had two returns (one punt, one kick) for 91 yards. And he had a 73-yard touchdown run called back by a holding penalty. He was unstoppable, and he added further kindling to a 2016 Heisman race that will likely be the most hyped in years.

McCaffrey returns next fall, as do Clemson's Deshaun Watson, LSU's Leonard Fournette, Georgia's Nick Chubb, etc. And if McCaffrey's biggest problem in 2015 was a lack of exposure, that's not an issue anymore. 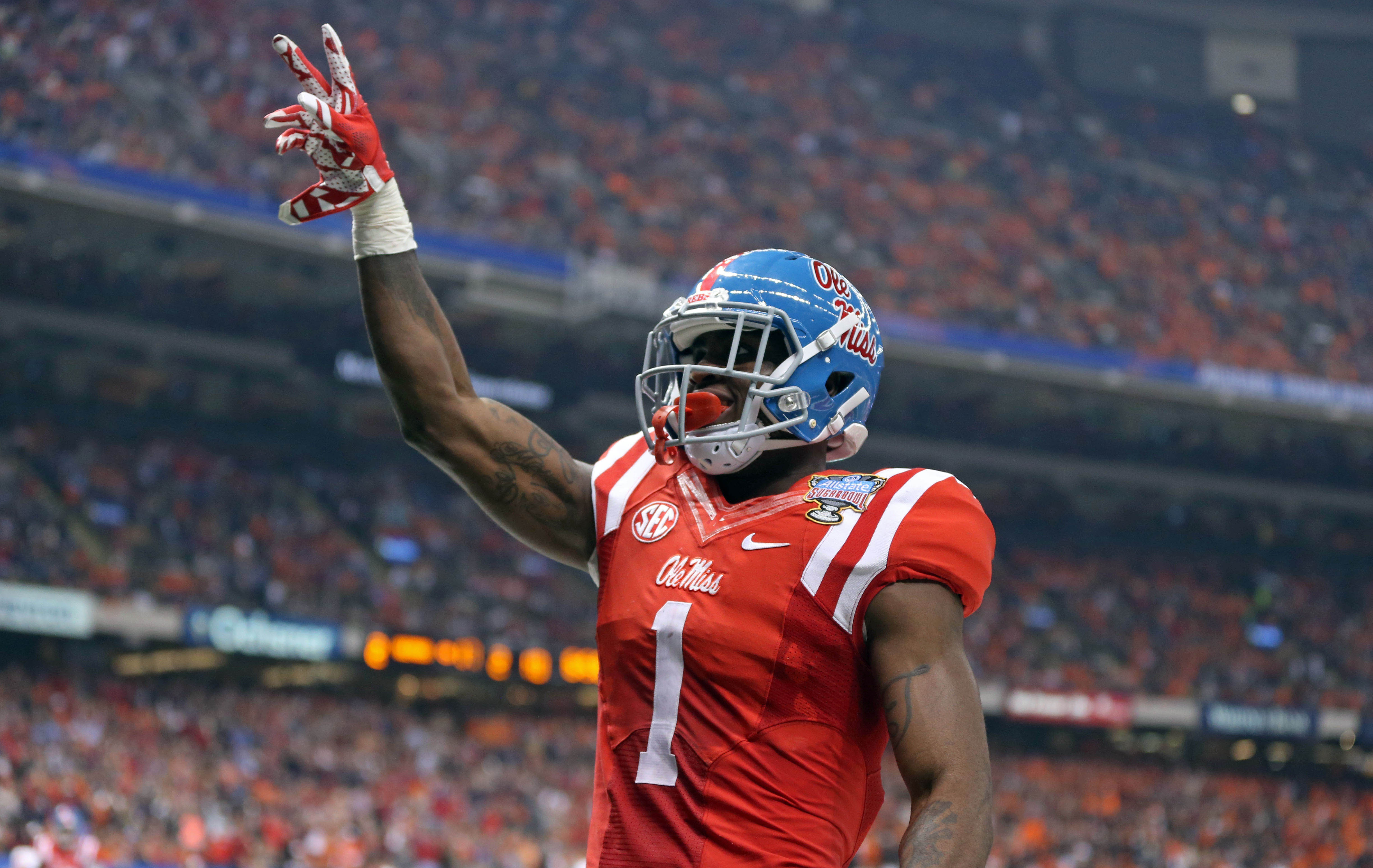 When Ole Miss is engaged, the Rebels are among the most fun teams in the country. More importantly, they're having fun. They're invading the line of scrimmage with their offensive tempo and defensive aggression. They're going deep. They're celebrating big hits. They're overwhelming an opponent with athleticism and passion.

This isn't always the Ole Miss that shows up. This year, the Rebels managed to lose to Florida and Memphis by a combined 41. But as Hugh Freeze's program prepares for transition, as the stars depart from his first couple of recruiting cycles and as a new batch gets ready to report, his Rebels put on one final show in the Sugar Bowl.

Against an overwhelmed Oklahoma State, the Rebels won their first Sugar Bowl in 46 years with ease. Once a New Orleans mainstay -- they attended this bowl seven times between 1952 and 1963 -- the Rebels waited a long time to return and took advantage of every moment.

Ole Miss will likely finish in the AP top 10 for the first time since, well, the last time it won the Sugar Bowl (1969). The last two years may have delivered an unavoidable what-if vibe, but they have also delivered a level of success Ole Miss fans have waited for for quite a while.

Speaking of what-ifs ... what if Michigan's defensive line hadn't suffered too many injuries this year? What if Wolverine quarterback Jake Rudock had always looked this good? Rudock, a graduate transfer from Iowa, began the season by overthrowing open receivers and throwing a costly pick-six in a loss to Utah. He finished it by completing 20 of 31 passes for 278 yards, three scores, no picks and no sacks against Florida in the Citrus Bowl.

And while Florida's offense started well, it folded quickly. Quarterback Treon Harris completed 8 of 21 passes, and with the game getting away from them in the second half, they went three-and-out three times and turned the ball over on downs once. Michigan scored the final 34 points of the game and cruised to an easy 41-7 victory.

Jan. 1 was a day of blowouts and goodbyes. Stanford's Kevin Hogan played in his third and final Rose Bowl. The gems from Ole Miss' 2013 recruiting class -- Laquon Treadwell, Laremy Tunsil, etc. -- went out with one final awesome performance. And Ohio State's Ezekiel Elliott torched Notre Dame for 179 rushing and receiving yards in his final game in the scarlet and gray, a 44-28 win over Notre Dame in the Fiesta Bowl.

Ohio State was playing in Arizona about 10 days earlier than the Buckeyes would have preferred (Glendale will host the Playoff final on January 11), but the Buckeyes still made the most of their last game. Against an athletic, resilient Notre Dame, they built a 28-7 lead, and while the Irish kept trying to come back -- they cut the lead to 28-21 midway through the third quarter and 38-28 early in the fourth (and in what may have been another goodbye, receiver Will Fuller caught six passes for 113 yards) -- they just couldn't get the stop they needed.

It was Zeke's show. The junior, who has already announced he'll be heading to the NFL, rushed 28 times and scored four times -- three on short runs in the first half, and once on a 47-yarder in the third quarter. His final season will be defined mostly by when he DIDN'T touch the ball much (he had only 12 carries in Ohio State's loss to Michigan State, which kept the Buckeyes out of the Playoff), but despite spending only three years in Columbus, and despite working mostly as a backup in 2013, Elliott leaves town with 3,961 yards and 43 rushing touchdowns. That's not a bad consolation prize.