Bama vs. Clemson is the best trenches battle this season could've possibly delivered

The National Championship will mostly be decided by what happens up front, and these two teams have the two best sets of lines in the country.

Share All sharing options for: Bama vs. Clemson is the best trenches battle this season could've possibly delivered

These were Clemson's most noticeable matchup advantages in the Orange Bowl: Clemson was quickly hurrying Baker Mayfield, sacking him five times in 46 attempts. Clemson's Wayne Gallman was getting further upfield than OU's Samaje Perine before contact. Deshaun Watson was able to work through his reads without serious pressure (32 attempts, one sack).

Sometimes when you have an advantage up front, in the trenches, it's the only advantage that matters. Watson and Gallman played well, and Clemson's secondary was up to the challenge against OU's solid receiving corps. But the Orange Bowl swung on Clemson's ability to control the trenches.

It was most apparent on the game's most noteworthy swing play -- Clemson's fourth-and-1 stuff of Perine midway through the third quarter -- but Clemson had a line presence throughout, even after star defensive end Shaq Lawson was lost for the game to injury. And the Tigers are in the National Championship because of it.

Meanwhile, Clemson's national title opponent has this guy and many others like him: 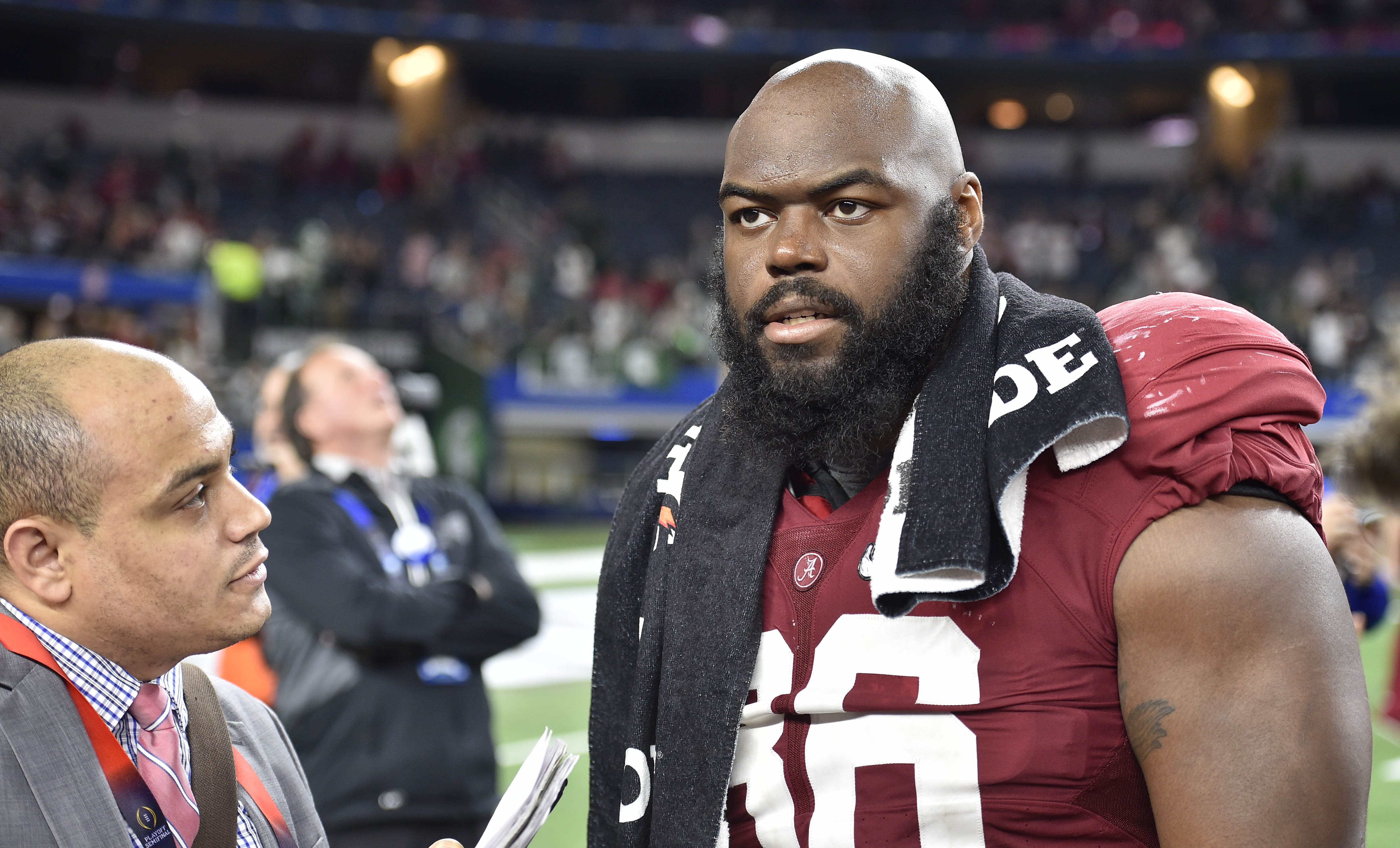 The depth and star power are staggering, considering how much the Tigers had to replace on both their offensive and defensive lines in the offseason.

On Monday comes the biggest trench battle of the year.

Stats on every Bama-Clemson matchup

Clemson is the only team to rank in the top 15 in all four primary line stats in 2015.

Alabama's line stats are decent on offense and nearly perfect on defense. These two teams were head-and-shoulders ahead of all other power conference teams up front.

Michigan State's sturdy defensive front was able to make life difficult for Alabama's running game in the Cotton Bowl. The dam broke when runs of 58 (by Kenyan Drake) and 11 (by Derrick Henry) set up the game's final touchdown, but until that drive, the duo had managed just 66 yards in 21 carries. And before garbage time, Bama's rushing success rate was a paltry 26 percent.

Lawson is expected back for Monday's game, and in terms of run defense and line stats, Clemson has been even better than Michigan State. And if the Tigers can trust their defensive backs to hold up to the strain of an Alabama passing game that stretches you as horizontally as possible before poking holes deep, Alabama might really struggle to score.

Of course, everybody struggles to score against Alabama.

Since allowing 43 points and 6.7 yards per play against Ole Miss in Week 3, the Tide have only once allowed more than 4.5 yards per play (Tennessee averaged 5) or 16 points (Texas A&M scored 23). Alabama's defense, always strong, is playing at its highest level since 2011. Shut down Clemson, and we'll draw comparisons to the classic 1992 Bama defense.

Alabama's entire defense works this year; the Crimson Tide are first in Rushing S&P+, Passing S&P+, Standard Downs S&P+, Passing Downs S&P+, success rate allowed, points per possession allowed and on and on. They erase your run game, and they force your quarterback to make throws most college QBs can't make (and under severe duress, no less, because they also rank first in Havoc Rate and second in Adj. Sack Rate).

Ole Miss was able to overcome the Tide's offense, in part because Rebel quarterback Chad Kelly (18-for-33, 341 yards, two touchdowns) has one of the strongest arms in college football, and in part because of luck. Ole Miss scored the game-deciding touchdown, a 73-yard pass to Cody Core, because of a fluky deflection; the pass was thrown into double coverage to someone other than Core. You have to be lucky and good to score a lot on Alabama.

Watson's arm isn't as strong as Kelly's, but thanks to his accuracy, his short game and his legs, he's been the best quarterback in college football. He's able to avoid pressure and throw the ball to the sticks on passing downs.

This is good because he's probably going to face a lot of passing downs. And if Clemson's awesome offensive line cannot carve out occasional advantages, he'll probably face too many passing downs to succeed, even if he's pulling some rabbits out of his hat.

Alabama is a seven-point favorite because Alabama justifiably gets the benefit of the doubt. If you pick the Tide in every game, you are almost never wrong. But Clemson's offensive line and defensive front might both be the best the Tide have faced this year.

Line play is one of the most useful aspects to watch early in a game. It allows you to see the future. Your playmakers can only do so much damage if you are losing the battles up front. Don't be surprised if Clemson's lines hold up.