The last time Alabama played Clemson, it changed the course of both programs

Alabama's win over Clemson in 2008 was a declaration of intent for a Crimson Tide program that has finished in the top 10 every year since. It was also a catalyst for a change that has worked out very well for Clemson.

Share All sharing options for: The last time Alabama played Clemson, it changed the course of both programs

Since 1904, Alabama and Clemson have played about once every eight years. But they've never really played at the right time, at least from Clemson's perspective. There was no meeting when Frank Howard's Tigers were at the peak of their powers in the 1950s and no head-to-head matchup in the 1980s, when Danny Ford had the Tigers rolling.

These teams played a few times in the 1930s, when Frank Thomas was taking Alabama to sustained heights and Clemson was but a minor program, left behind in the Southern Conference after the SEC's formation. They played a few more games in the 1960s, when Bear Bryant had established a cruising altitude and Howard was fading. Clemson visited Tuscaloosa in 1975, as Bryant was establishing a second peak and the Tigers were floundering.

From a narratives perspective, perhaps the most interesting meeting between these two teams was their last. The programs were ships passing in the night, heading in different directions, and we didn't quite know it yet. But one of those ships would eventually get turned around. 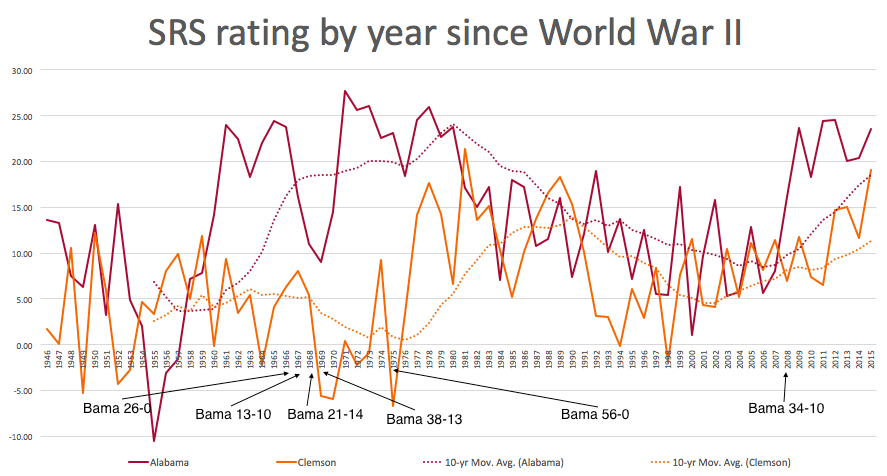 Clemson had played an indirect role in 2007's chaos. The Tigers spent about two-thirds of the season ranked, but a blowout loss to Virginia Tech at home knocked them backwards, and they finished the season with one good win (at South Carolina) sandwiched by frustrating losses to No. 18 Boston College (via Matt Ryan bomb in the final minutes) and No. 22 Auburn in the Chick-Fil-A Bowl.

In nearly a decade under Tommy Bowden, Clemson had perfected the art of raising the bar, then failing to clear it. In 2001, 2004, and 2006, the Tigers began the season ranked and finished it unranked. In 2003, 2005, and 2007, they began it unranked and finished it ranked. Fate and expectation never really matched up in the Bowden years, but 2008 was particularly special in that regard.

Following the chaos of 2007, Bowden's Tigers returned eight starters on both sides of the ball and began the season ranked ninth in the AP poll. Phil Steele ranked them fifth. The last line of his Clemson preview: "Six of my 8 sets of power ratings call CU the most talented team in the ACC and 3 of them even call for a 12-0 year." The Tigers had one of the most talented backfields in the country, returning quarterback Cullen Harper and running backs C.J. Spiller and James Davis. On defense, blue-chipper Da'Quan Bowers was joining a talented defensive front, and the secondary would be anchored by senior safeties Michael Hamlin and Chris Clemons. It was time for production to match potential in northern South Carolina.

Alabama, meanwhile, was ranked almost as a courtesy. Nick Saban's first season in Tuscaloosa had produced only a 7-6 record and was marred by a late four-game losing streak that included stumbles to both Mississippi State (bad) and UL-Monroe (worse). Only a tight bowl win over mediocre Colorado kept the Tide on the right side of .500. They returned 13 starters and stars like offensive tackle Andre Smith and linebacker Rolando McClain, and they were welcoming a ridiculous recruiting class to town, one that featured the likes of Julio Jones, Barrett Jones, Mark Barron, and JUCO man-mountain Terrance Cody. The talent was coming together, but you don't just flip a switch. It was probably going to take a little more time, especially considering the schedule included not only a trip to Atlanta to face Clemson, but also trips to preseason No. 1 Georgia, No. 7 LSU, and No. 18 Tennessee and a visit from No. 10 Auburn.

So Bowden would finally get the monkey off of his back and thrive in 2008, and Saban would need one more year to get Alabama's affairs in order before taking off. Or not. Six games into the season, Bowden had resigned. Three weeks after that, Alabama was No. 1 in the country.

Alabama led 23-3 at halftime, and Clemson's only touchdown in a 34-10 defeat came from a Spiller kickoff return. Davis and Spiller combined for 20 rushing yards, while Glen Coffee and freshman Mark Ingram, a late addition to Alabama's class, combined to rush 34 times for 186 yards. John Parker Wilson completed 22 of 30 passes. This was a rout.

We obviously didn't know it at the time, but this game set the wheels in motion for both Clemson and Alabama to reach the 2015 national title game. For Alabama, this was an immediate statement, a declaration that the struggles of Saban's first season were very much in the rear view. Since the start of 2008, the Crimson Tide are a ridiculous 97-12; this will be the eighth straight year that they finish in the AP top 10, the fifth time they finish in the top four, and the seventh consecutive year that they finish in the top two in the F/+ rankings. This season, an Alabama player even won the program's second Heisman -- Derrick Henry followed Ingram's 2009 award.

The Clemson win began a dynastic streak that is virtually on par with either of Bryant's great runs (1959-67, 1971-81), in an era when scholarship limitations are intended to prevent such dynasties from forming.

From Clemson's standpoint, however, 2008 was a blessing in disguise, no matter how awful it felt at the time. The Tigers fell from ninth to unranked following Alabama's whooping, won three straight to reappear in the rankings, then lost to Maryland at home and Wake Forest on the road. Bowden resigned with his team a crushing 3-3 disappointment, and instead of appointing one of Bowden's coordinators as interim coach, Clemson went with the excitable, charismatic receivers coach and assistant head coach who had been out of coaching just five years earlier.

Dabo Swinney was given the role of interim head coach that October and proceeded to lose two of his first three games. It did not appear he was long for his role, but a late-season hot streak -- the Tigers whipped Duke, beat Virginia by 10 in Charlottesville, then, most importantly, whooped South Carolina by 17 points at home -- convinced athletic director Terry Don Phillips to take quite a leap in faith. On December 1, two days after the win over the Gamecocks, Swinney was given the full-time job.

"I have had the opportunity to watch Dabo Swinney closely over the last six years both on and off the field," said Phillips. "He is one of the bright young coaches in America. He took over a very difficult situation for the last six games and showed me what type of coach and leader he is. I was very impressed by the way the team responded to his leadership. That spoke volumes for his abilities. We are proud to have him represent Clemson as our head football coach." [...]

Swinney has also had a strong impact on Clemson's recruiting success in recent years. In February of 2006 he was listed as the fifth best recruiter in the nation by Rivals.com. He has been named one of the top 25 recruiters in the nation by that media outlet four times. He has signed 38 student-athletes in his five recruiting seasons and was a major reason Clemson's 2008 class was ranked second nationally by ESPN.com when he signed 11 student-athletes.

At first glance, it appeared to be a bit of a panic move, one dictated by recruiting (at which Swinney was quite renowned). Swinney was 39 years old and had never been a coordinator; eight years earlier, when he was dismissed as an assistant at Alabama, his alma mater, he took a real estate job and ended up keeping it for three years.

Things didn't start incredibly well, either. Including his interim stint, he won only 19 of his first 34 games in charge. After a win over South Carolina helped him get the job, he proceeded to lose to Steve Spurrier's Gamecocks five times in a row. He lost five of seven to Florida State. He reached the 2009 ACC Championship thanks to a weak division but lost to Georgia Tech. He lost seven of his first nine games against ranked opponents. He won the ACC in 2011, then proceeded to watch his defense get pantsed by West Virginia in the Orange Bowl.

But he was recruiting well. Between 2011 and 2015, Swinney signed four top-15 classes; his 2015 class ranked eighth, his best yet. And he made two wonderful coordinator hires: he brought in little-known spread maestro Chad Morris as offensive coordinator in 2011, and following the dismissal of Kevin Steele after the Orange Bowl debacle, he brought in OU's Brent Venables in 2012. In 2014, he brought all-world quarterback Deshaun Watson to town. Since 2012, Clemson is 46-7.

Recruit well, hire great assistants, and motivate everybody properly, and you're probably going to build a lovely program. Add the best quarterback in the nation to that mix, and you might even make the national title game. Clemson is here a year early, really: with so many sophomores in key positions on offense (quarterback, running back, No. 1 receiver) and lines that had to replace nearly every 2014 contributor, Clemson was a question mark heading into 2015. The Tigers looked like a team that, like Alabama in 2008, might need one more year to get the pieces in the right place.

Instead, Swinney got them here a year early, just as Saban did. It took him longer, but he's here. And if not for the debacle in Atlanta on Labor Day Weekend 2008, the pieces may not have fallen in quite the same way.