Share All sharing options for: You know Ezekiel Elliott. These charts explain the NFL Draft's other best RB picks

The lie about sports analytics is that they give you all the answers. Really, they are intended to a) make sure you are asking good questions and b) give good partial answers.

For instance, they cannot clearly tell an NFL general manager who is the slam-dunk best running back in the 2016 NFL Draft. But they can communicate a lot about the style of a given back, and they can confirm or challenge assumptions.

I combined some general NFL Combine test data with some of the running back stats I monitor at the college level to see what they could tell us about prospects for next week's NFL Draft.

Using Dan Kadar's latest running back rankings for SB Nation, I looked at the top 20 prospects for whom I have a decent selection of data.

For these purposes, I eliminated No. 6 Jonathan Williams (injured in 2015), No. 12 Keenan Reynolds (college quarterback) and No. 18 Marshaun Coprich (FCS). Obviously not all Combine data exists for all players, since some either didn't attend and didn't have appropriate data from their respective pro days readily available or elected not to perform a given drill.

With this raw data, we can have some fun. One of my favorite data visualizations is the radar, a fantastic way of showing both style and quality in one fell swoop. For a while, I've enjoyed the work of StatsBomb's Ted Knutson in the realm of soccer radars, and I tinkered with radars at Football Outsiders last fall. 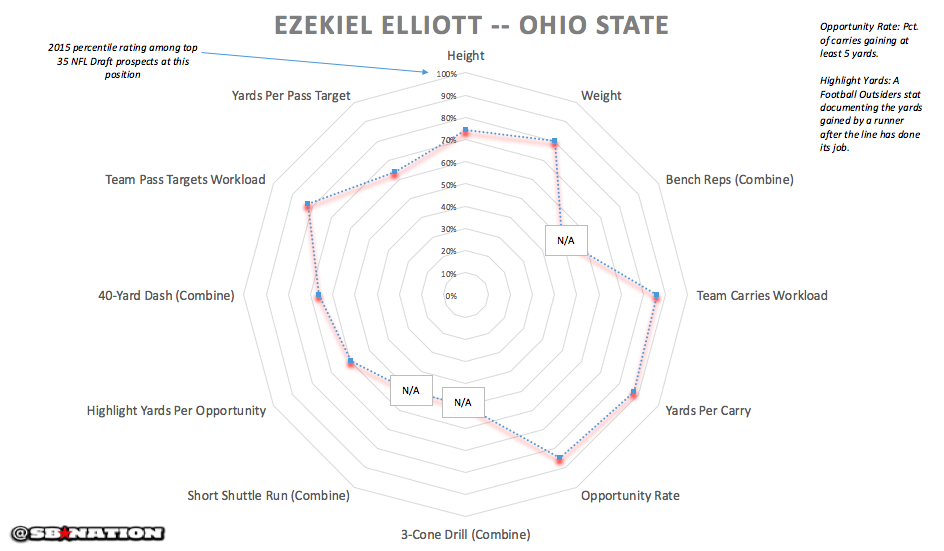 For Elliott, this paints a picture of his well-roundedness, even if we don't have full Combine data for him. It shows he's got average size compared to the rest of this draft class, that he's capable of running frequently and efficiently and playing a solid role in a team's passing game. His speed is fine, but he is regarded as having the best overall skill set of any back in the draft (especially when you factor in pass blocking), and this backs that up. 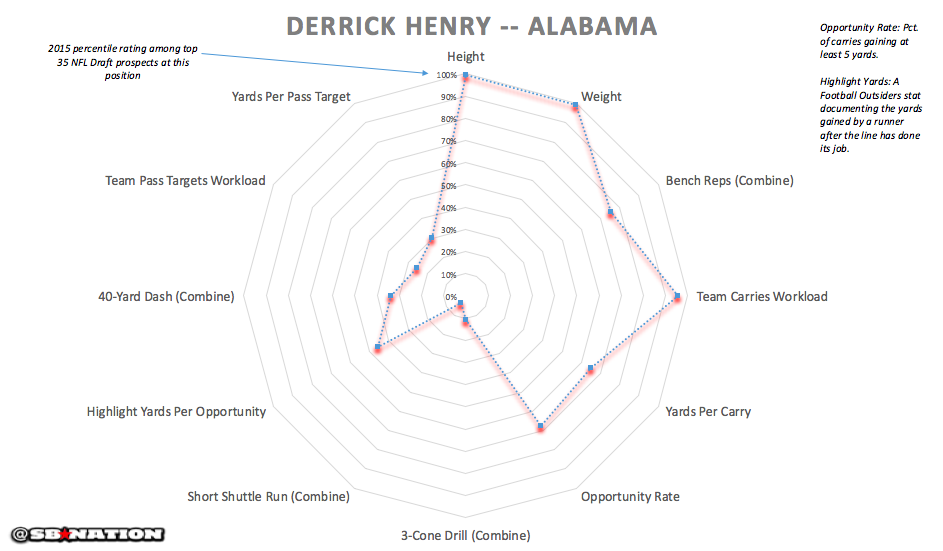 This says, "Derrick Henry is a beast of a man with solid efficiency, OK speed and almost no proven receiving ability." Using only one year of data limits us -- it ignores, for instance, that Henry had six catches for 194 yards in his first two seasons in Tuscaloosa -- but this matches up with the impression we got by watching him run last fall. He is a giant with good balance but without the world's greatest agility. 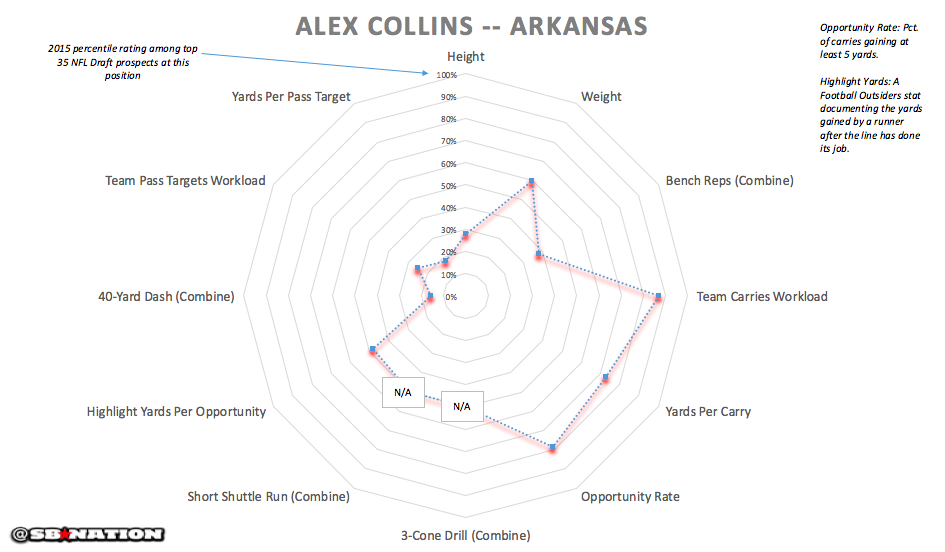 Collins was one of the most efficient backs in the country over the last couple of years, but he too played little of a role in his team's passing game and his explosiveness is minimal. (He also fumbled a lot, which didn't make this chart but is a red flag.) And he's not an enormous physical presence. 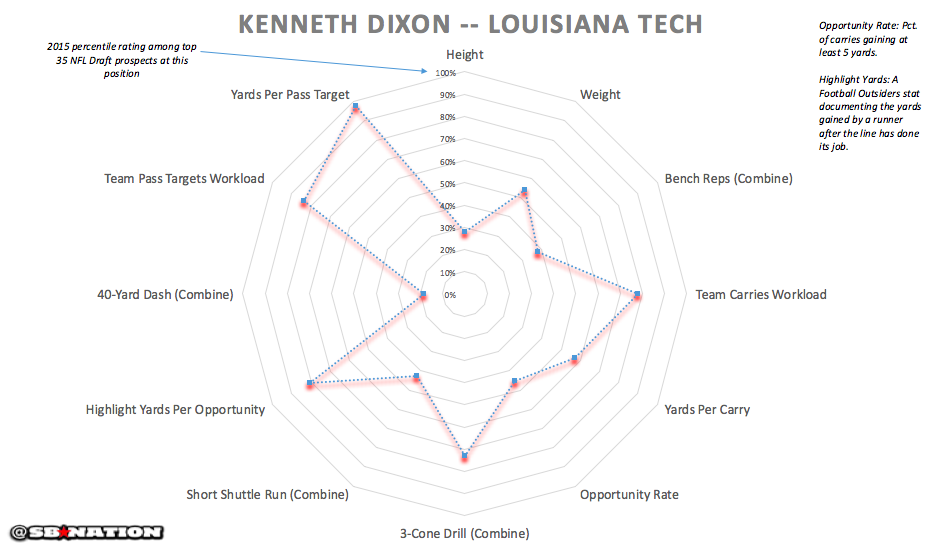 Dixon was a star for most of his four seasons, and he was as adept at catching out of the backfield as he was at taking handoffs. He has neither the build, history or efficiency of your prototypical feature back, and his 40 time wasn't what you would hope for. But his hands and football speed (in terms of both highlight yardage and nearly 14 yards per catch) are lovely. 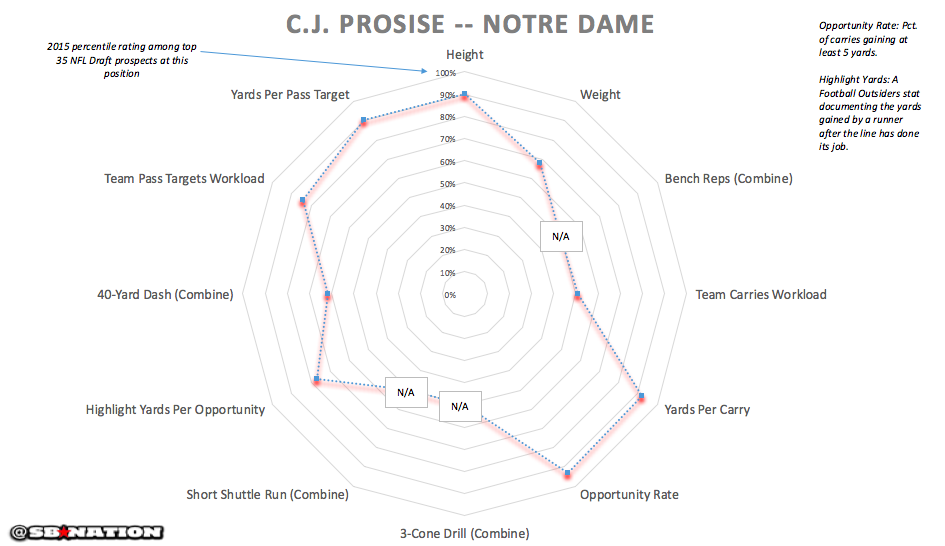 Prosise moved from receiver to running back in 2015 and took to the position beautifully. He was both efficient and explosive, and as you would expect from a one-time WR, he played a strong role in the passing game. He's a little lanky, but a team that is creative in how it deploys its skill guys might be well-served by this blank canvas. 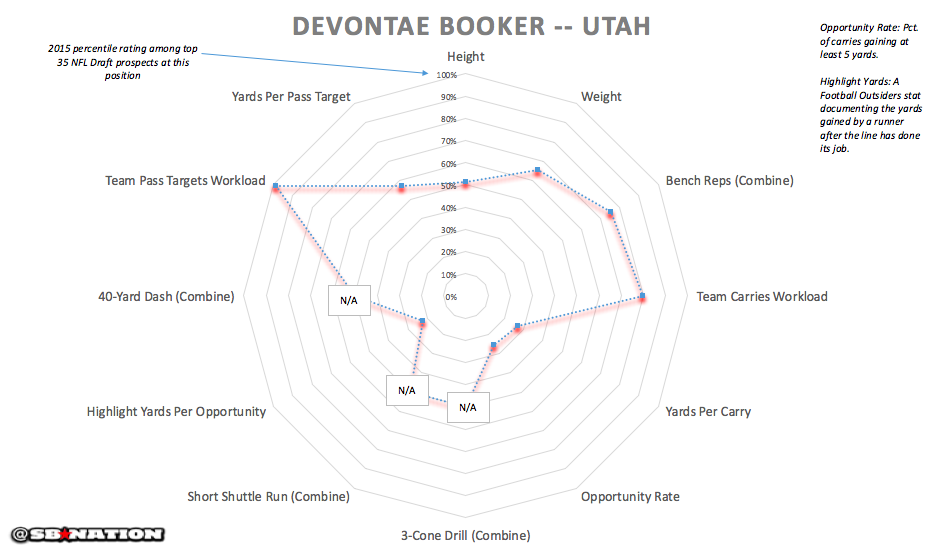 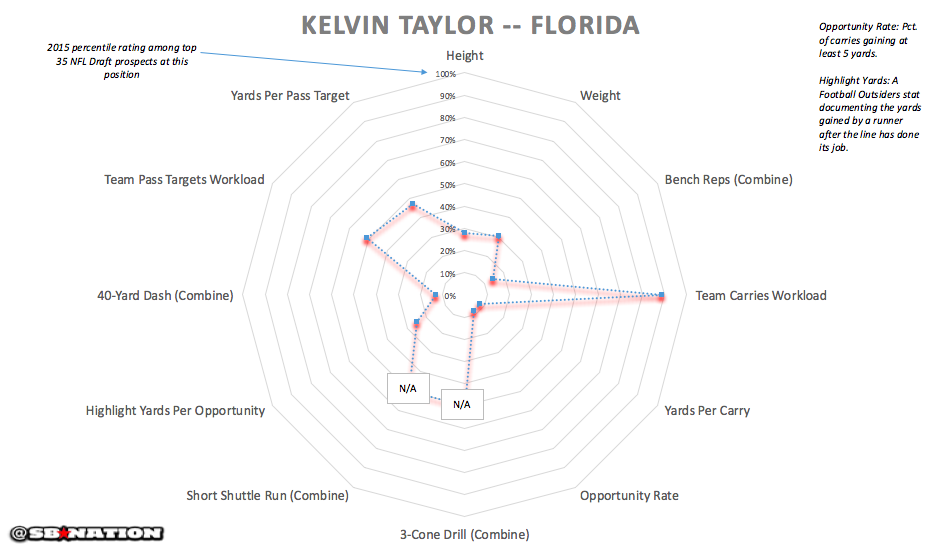 Booker and Taylor proved they could handle the ball frequently. And on rare occasion, they did something productive with it. Booker carried 34 times for 222 yards against Cal (and 32 for 229 against Oregon State in 2014), and Taylor had 24 carries for 136 yards against FSU last fall (and 25 for 197 against Georgia in 2014).

But for the most part, they were simply gaining zero to four yards at a time, creating what you might call replacement-level production. The transition from college to pro is unpredictable, and a ton of guys can succeed with the right system and/or development, but ... neither of these guys proved much, either at the Combine/pro day or statistically. 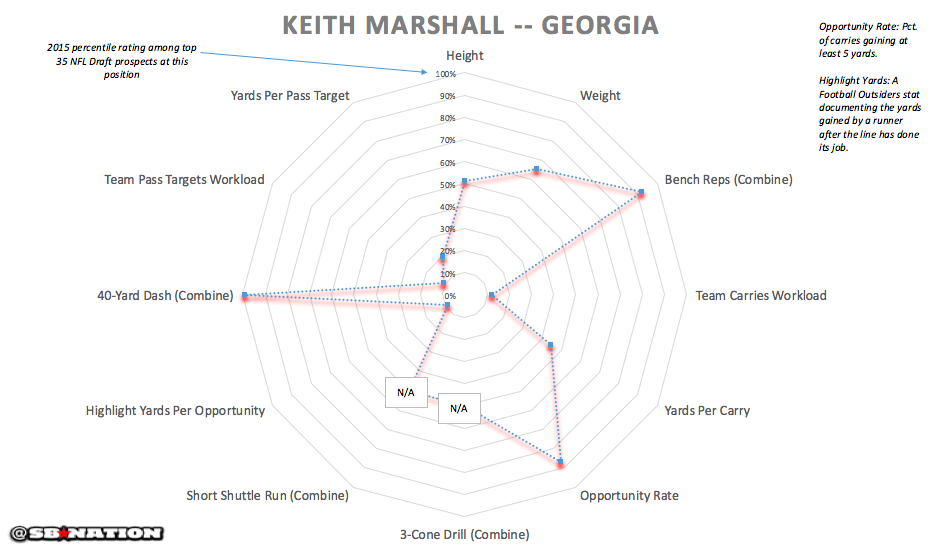 Multiple injuries limited Marshall's production in college, and it's been a while since he showcased explosiveness on the football field. But he was efficient in his minimal carries in 2015, and he aced the Combine, with the best 40 time and one of the best bench performances. That will get him drafted. And hey, if his Combine numbers hint that explosiveness will come back while his efficiency is sustained, he could be a steal.

Or not. Production is still the best predictor, and he's had very little. 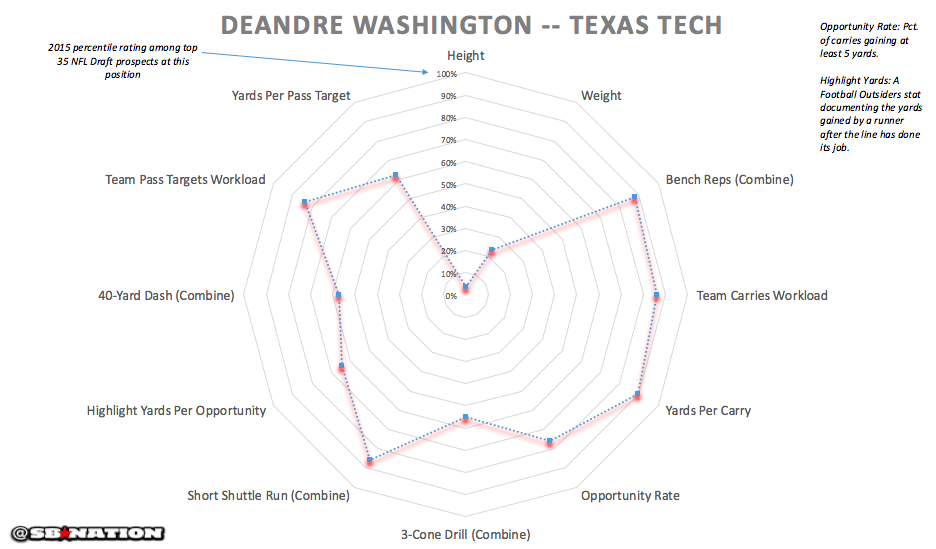 And now we get to my favorite beneath-the-surface pick. There was barely a spot for DeAndre Washington in Kadar's top 25, and at first glance it's easy to see why. He's tiny. He's got a knee injury in his history. Makes sense.

But ignore his size, and he checks nearly every other box. He's strong as hell and carried a solid workload. He is efficient and explosive, and he aced the shuttle. And he was frequently targeted out of the backfield, averaging a far-from-terrible 9.9 yards per catch and 7.0 yards per target. He was a return man during his freshman year, as well.

Plus, his radar looks like the Wu-Tang Clan symbol. So there's that.

Maybe Washington's size prevents him from a long NFL career. But with his strength and incredible skill set, maybe he's the exception.