Two of the No. 13 pick's social media accounts appear to have been hacked on draft night, potentially costing him money and putting more NCAA attention on his college.

Share All sharing options for: After bizarre Instagram posts, Laremy Tunsil seems to agree he took money from coaches

Ole Miss offensive tackle Laremy Tunsil had a rough draft night. Projected by many as a top-five choice, Tunsil tumbled to the Miami Dolphins at pick No. 13, potentially losing $10 million in the process.

Just 10 minutes before the draft, a video was posted to Tunsil's verified Twitter account showing a person resembling Tunsil ripping a bong from a gas mask. Word came that some teams -- including the Ravens, who selected Notre Dame's Ronnie Stanley instead -- actually took Tunsil off their board altogether.

That's not all that concerning for Ole Miss, and Tunsil said on ESPN that he was looking into who hacked his Twitter account and released the video, which he said was filmed several years ago.

What was posted on Tunsil's verified Instagram account, however is potentially a big concern for Ole Miss, which is already under investigation by the NCAA for a variety of violations concerning impermissible benefits and recruiting malfeasance, a portion of them involving Tunsil. He was suspended for seven games in 2015 over, among other things, a loaner car.

Two screenshots were posted shortly before 10 p.m. ET, depicting a text message conversation in which someone with the initials "LT" asks someone named John for rent money and a utility bill payment. "LT" is told to see someone named Barney. "LT" also asks to meet the coach in the IPF. 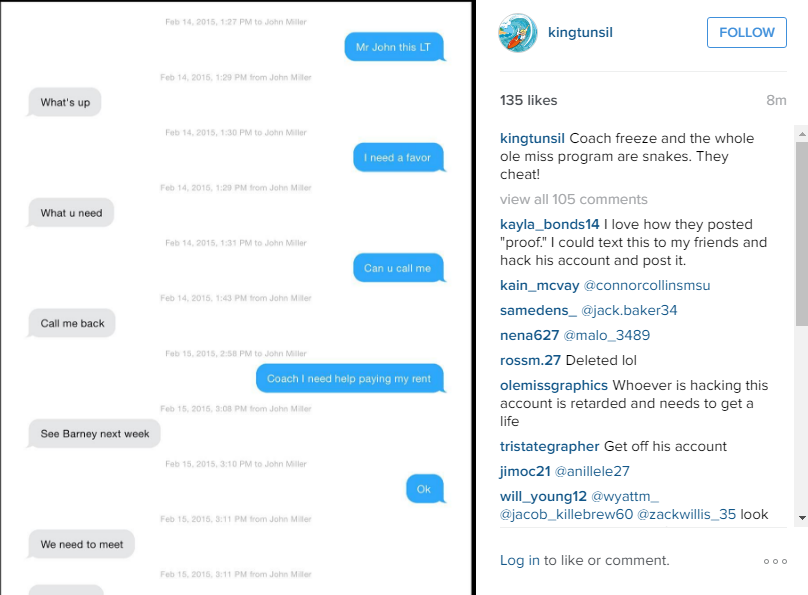 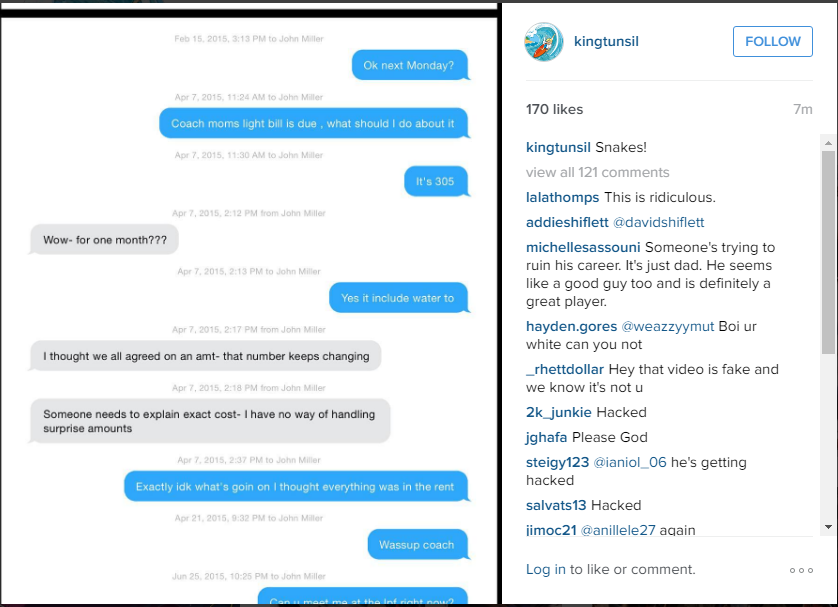 "Those are true. Like I said, I made a mistake, it happened," Tunsil said when asked about the "messages" during a press conference after the draft, though it's unclear whether he understood the question to be about his Instagram or Twitter account. He said he found out about the Instagram posts "five minutes" earlier during a live ESPN interview.

When asked whether there was an "exchange" of money involving coaches, Tunsil said, "I'd have to say yeah."

Many in the recruiting industry found Tunsil -- the No. 1 offensive tackle recruit in the country in the class of 2013 -- passing up the likes of Alabama, Florida, Florida State, Georgia and LSU to pick an Ole Miss program that at the time had lost 24 games in the three previous seasons to be suspicious.

If these are actual text messages from Tunsil's phone, and if they concern coaches or athletic directors from Ole Miss, this could be very bad for the Rebels. But that's a lot of ifs, and Instagram posts may not be evidence.

The Ole Miss NCAA drama timeline: Freeze, Tunsil, and everything else