The Big 12 realignment story is slowing down at the moment, but here's how the Knights of Orlando sold themselves to the Power 5.

The Big 12 is continuing to consider expanding to 12 teams, and that means prospective invitees are making sure Big 12 institutions have all the facts they need.

Cincinnati created multiple promotional videos for Big 12 administrators. Houston gave a president a tour and promoted its local TV ratings. Memphis created a huge, 42-page document that hit everything from Justin Timberlake to FedEx. Even Colorado State created a promotional pamphlet reminding folks that Colorado isn't *that* far away.

UCF created one as well, which SB Nation obtained on Friday via public records requests. In a letter dated May 17, 2016, UCF president John C. Hitt wrote Oklahoma State president Burns Hargis, sending a long a 13-page promotional document along with an economic study comparing UCF's market of Orlando with Cincinnati's and UConn's. 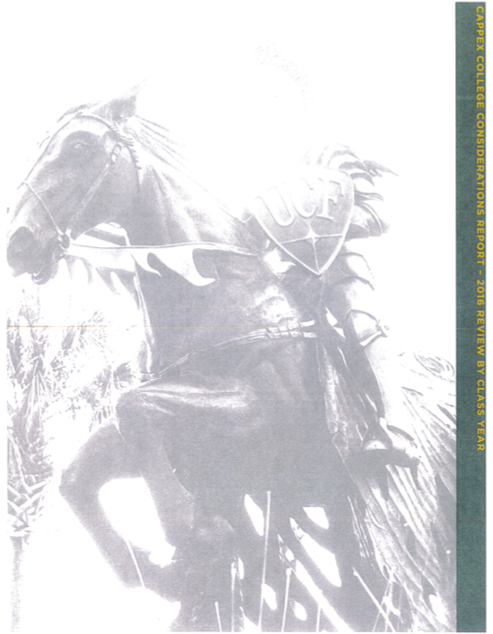 Okay, we're off to a good start here! 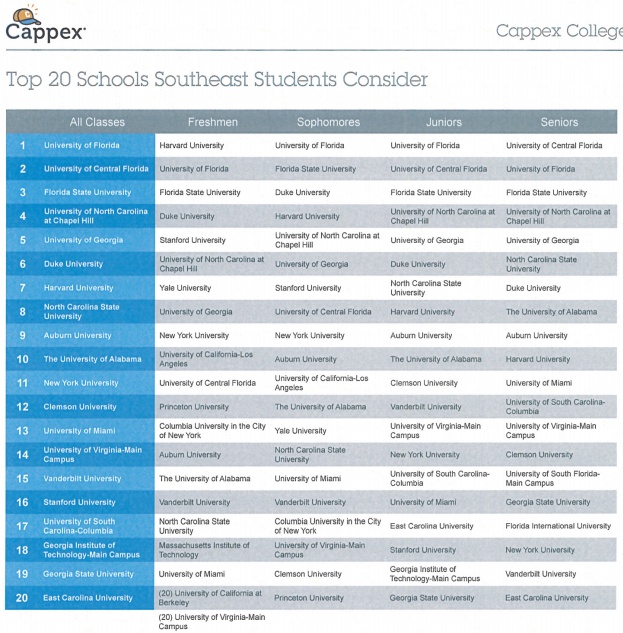 Per Cappex, UCF is the "most considered" university in the Southeast among high school seniors. As freshmen, this data shows students are more interested in elite schools like Harvard or Duke, along with selective state flagship schools. But as students get older, interest in UCF jumps. 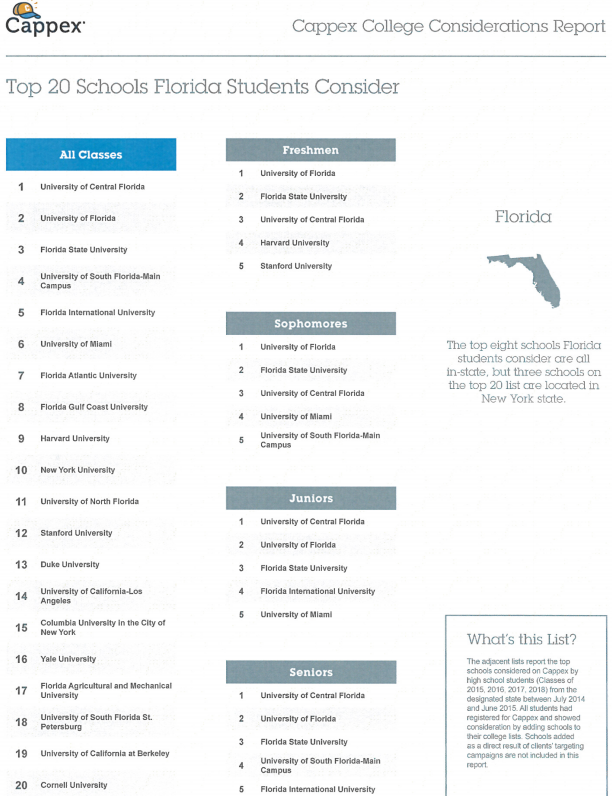 Among Florida students, UCF is the most "considered" university, according to Cappex. 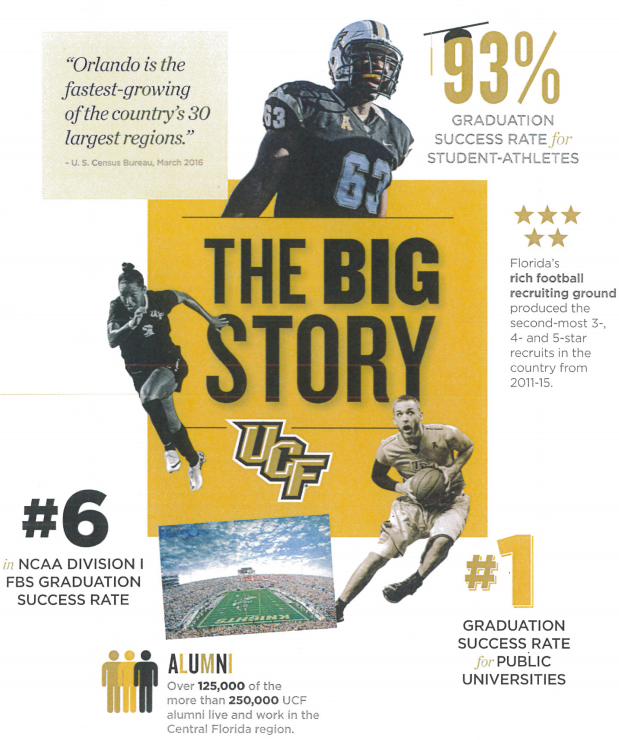 UCF is quick to highlight the growth of the Orlando region. It highlights Florida recruiting, as the state produced the second-most three-, four- or five-star football prospects from 2011-15. 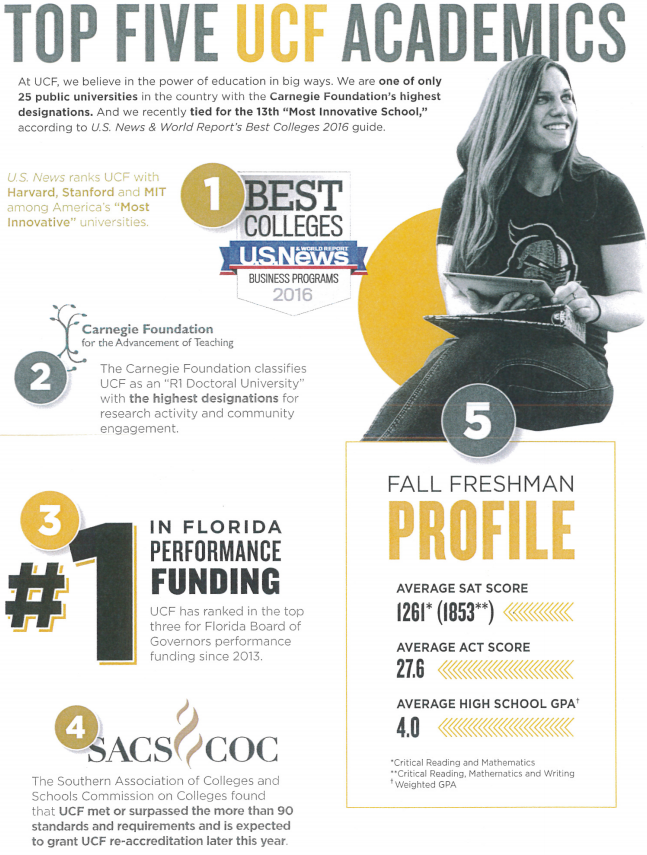 UCF would like Big 12 administrators to know that UCF's incoming freshmen have strong academic backgrounds, that the university is a top research institution and that it is right up there with MIT, Harvard and Stanford when it comes to being an "innovative school." 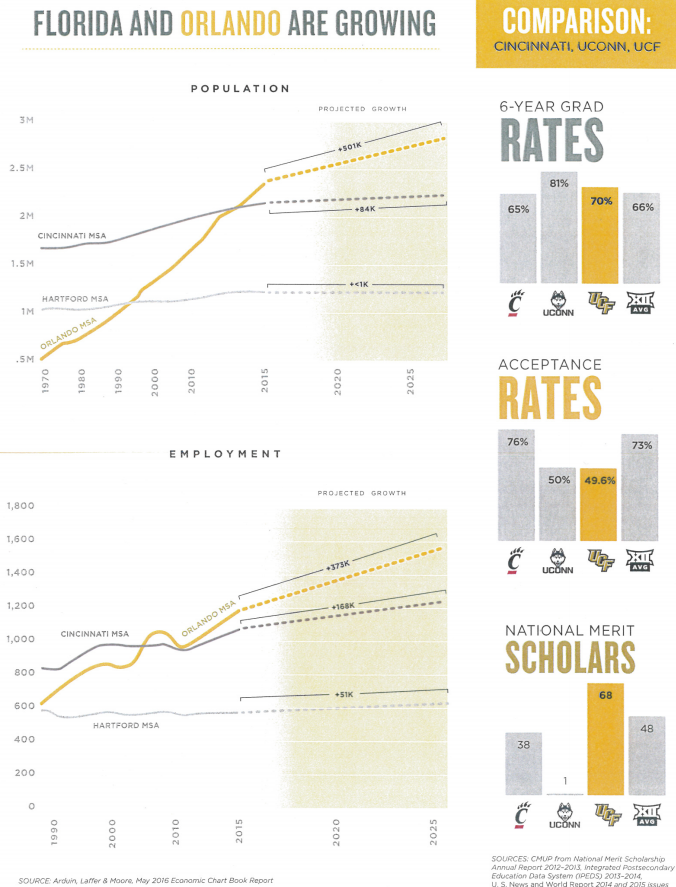 UCF highlights that the population and general economy of the Orlando area is doing much better than Cincinnati or Hartford. 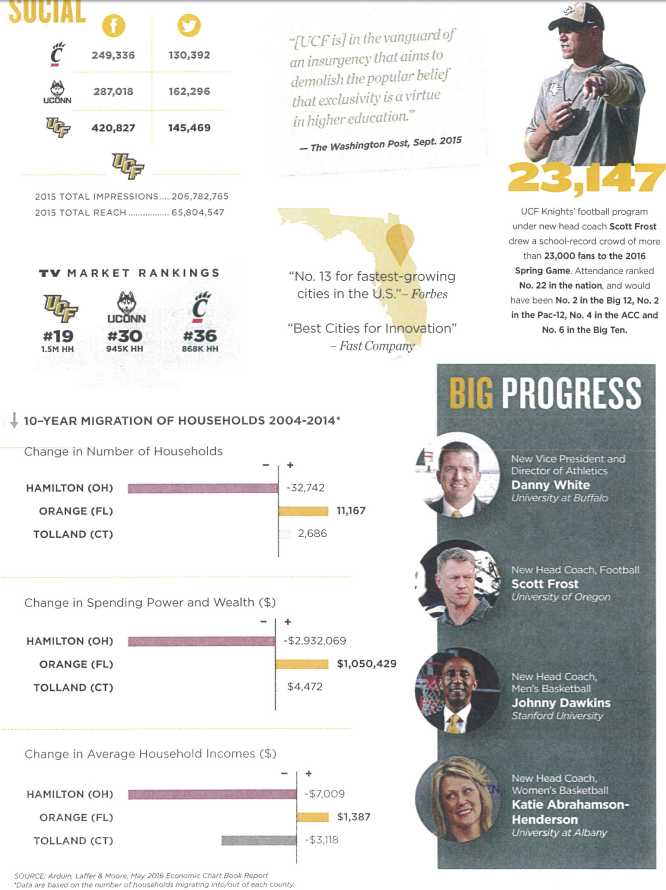 UCF shows people are leaving Cincinnati and Hartford, but moving to Orlando. It also claims a stronger athletic department social media reach than Cincinnati or UConn, and that it drew over 25,000 for the spring game. That's a good sign, because UCF only averaged 30,065 fans a game last season. Of course, UCF also didn't win any football games.

UCF also has a new AD and new football and men's and women's basketball coaches. 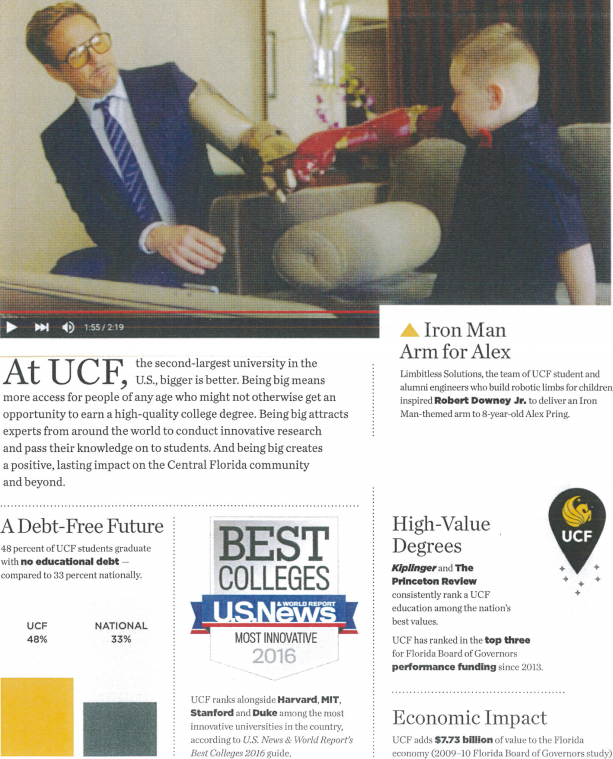 Oh hey, here's Robert Downey, Jr.! He didn't go to UCF. But they make robots there, and he's famous for robots. 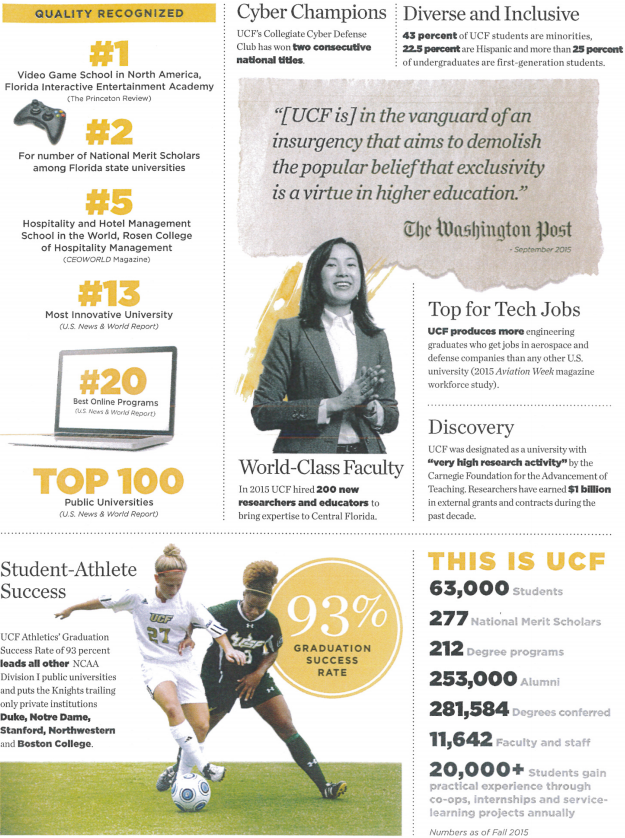 Sure, there's information here about how UCF is a huge school that graduates athletes, but the most important thing on this page is that UCF is apparently the "#1 Video Game School in North America." We all picked the wrong university. 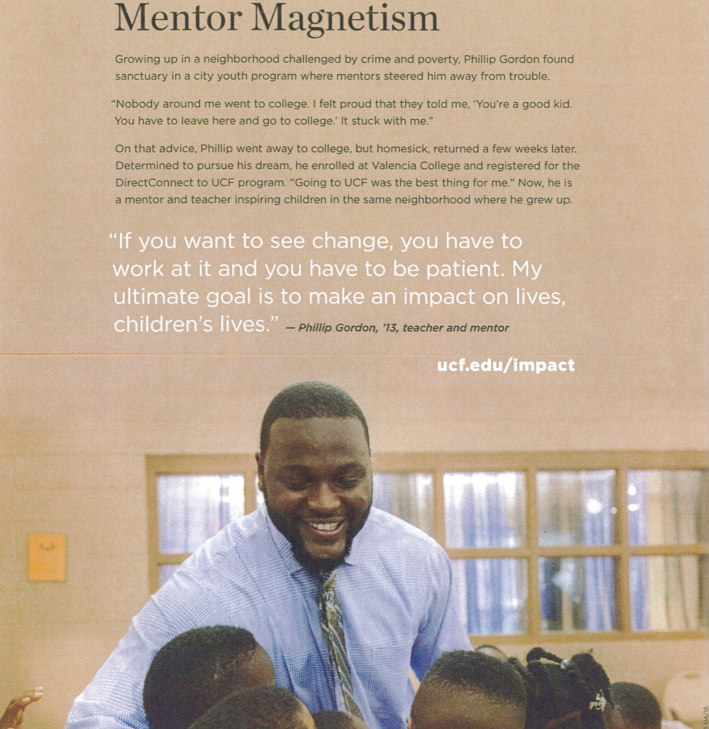 UCF included an elaborate economic impact study claiming the Orlando region is likely to experience dramatically more population and economic growth than Cincinnati or Hartford. The letter mentioned that UCF's 45,000-seat football stadium could be expanded to around 65,000 should UCF join the conference. 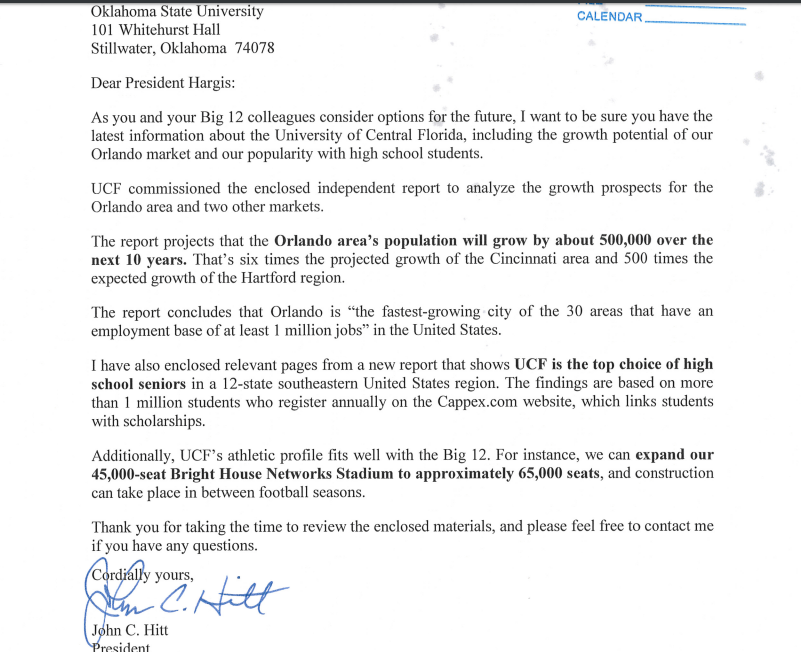 UCF's pitch focused less on athletic history than some of the other Big 12 candidates did, with a heavy focus on the Orlando market.

It's also interesting to see how directly UCF tried to contrast itself with UConn and Cincinnati, rather than Houston, BYU, USF or other possible candidates.

Now that the Big 12 has decided not to pursue a conference TV network, that may hurt everyone's viability as a candidate. That could be even more the case for UCF, which made its media market such a large piece of its pitch.

Get one roundup of college football stories, rumors, game breakdowns, and Big 12 hysteria in your inbox every morning.