College football’s Week 2 was supposed to be boring. Um, it was awesome.

Good morning! This is the Read Option, your daily college football newsletter. Sign up for this in your inbox!

Share All sharing options for: College football’s Week 2 was supposed to be boring. Um, it was awesome.

It didn’t look any good. College football’s Week 2 schedule had a total of zero ranked-versus-ranked matchups on it. The country’s best teams were mostly playing cupcakes. There were some good rivalries on the docket, but this wasn’t supposed to be nearly as fun as the slugfest that was Week 1.

So much for that.

Saturday ruled, pretty much from start to finish, and showed we should never doubt that college football will provide, no matter how weak the schedule looks.

Here’s some of what made it, against all odds, such a great watch.

The rivalries were hot. BYU lost the Holy War against Utah on a game-winning two-point conversion try. Pitt and Penn State got together for the first time in 16 years, the renewal of a rivalry that still means a ton. The Panthers won the game despite Saquon Barkley’s five touchdowns, thanks to a really fouled-up last drive by Penn State. You really can’t do this, not ever, but not on second down with plenty of time left in the game:

¡El Assico!, the greatest Iowa-Iowa State rivalry of all of them, was not competitive, but that’s fine. It’s always the exception to the rule, whichever the rule is.

The finishes were wild. Arkansas beat No. 15 TCU in a super wild double-overtime, an ending only made possible by a 6’10 offensive tackle blocking a last-minute TCU field goal try that would’ve won the game. FCS Goliath North Dakota State survived their second serious scare of the season, and it might've been the best game of the week. UConn painted the Mona Lisa of brutal clock management and cost itself a likely win against Navy.

That one finish was even wilder. It’d be dishonest to include this one with the rest of them. Central Michigan beat Oklahoma State in nearly the weirdest way possible.

Officials gave CMU an untimed down after flagging Cowboys quarterback Mason Rudolph for intentional grounding on a clock-killing throw-away. As the officials’ boss later acknowledged, they weren’t supposed to do this, because grounding is a loss-of-down penalty. You don’t get untimed downs for loss-of-down penalties. Even Central Michigan thought it had lost, but it hadn’t, and then it got a miracle.

It had history! This is thanks to Arizona State's Kalen Ballage, who tied an all-time college football record by housing the football eight times against Texas Tech. He made it look kind of effortless, too.

Are you kidding?! Kalen Ballage scores his 8th Touchdown in style! https://t.co/AkHFuNxQa3

And Friday night, the weekend started with Louisville QB Lamar Jackson reaching 13 touchdowns in his first 60 minutes, something no entire team has done in a long time.

AND THE BIGGEST CROWD EVER HAPPENED. The scene at Bristol was unbelievable ...

... except for a lot of the people in the stands. It's officially the biggest crowd in football history, though, beating Michigan's record by more than 41,000 humans. Everyone thinks that's something, except for these signholders:

To recap, Week 2 had boiling, entertaining rivalries. It had some of the refereeing and coaching incompetence that makes the sport endearing. It had several game endings that settled somewhere beyond normal belief. It had a dude find the end zone eight times in a game.

Florida State’s defense is going to try to stop the apparently unstoppable Louisville quarterback Lamar Jackson.(That’s your GameDay game.) Alabama-Ole Miss! Maybe the Tide can finally get over the hump! Ohio State-Oklahoma! Houston-Cincinnati! Oregon plays Nebraska, which ought to be good. Auburn and Texas A&M have the Anxiety Bowl. There’s Michigan State-Notre Dame, UCLA-BYU, and Texas-Cal. All swell.

It’ll be easy to get excited for what’s ahead. But next week’s got bigger shoes to fill than anyone would’ve thought before.

CFB in your inbox, everyday, for free!

Get an original mini-column on the college football thing of the day, plus news, links, and fun stuff!

The best of GameDay's signs included some ok stuff, but the story of the morning was the fan who got literally hundreds of people to pay him by holding up a sign asking for it.

One reason for No. 2 Clemson only getting past Troy by one score: a player pulled a DeSean Jackson.

Gov. Kirby Smart's honeymoon has ended after a two-point win over one of the worst teams in all of Division I.

Nevada is the first team of the year to do the Accidental Reconsidered Kickoff Return Safety, I believe.

After a triumphant victory over Rhode Island, Kansas lost to Ohio. This punt is a microcosm.

Northwestern has enjoyed a run of recent success that was a little hard to believe, for several reasons. 2016, so far, is a return to classic form.

Florida's winning streak over Kentucky cracked 30 years, and with gusto.

The latest entry in the stirring bromance that is Lane Kiffin-Nick Saban: a non-literal, but definitely televised, "ass-chewing."

Some people were very excited by this USC player and ref getting into a very minor altercation. Maybe the ref was being a little grabby? I guess that's the thing?

(Actually off-putting ref interaction: a JUCO player was reportedly arrested for this punch.)

An LSU return man went from running backward with five guys in his face ... 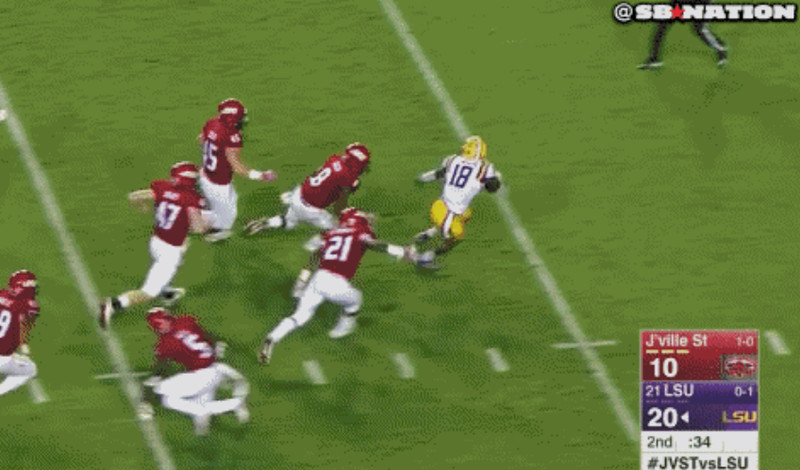 BYU pulled off something impressive, though part of it is dubious: targeting calls on back-to-back plays.