Let's wrap up Week 3 with some fun awards for the best (and best-ish) of the weekend!

Your weekly SB Nation Saturday Superlatives are in after an amazing weekend of college football.

Although this week’s wasn’t committed by a defensive player, LSU running back Leonard Fournette literally slam dunked a Mississippi State defender on Saturday night. No, seriously.

No. 2 Ohio State went into Norman and completely silenced the Oklahoma Sooners' poor backup QB, winning 45-24. Before the season began, the Buckeyes returned an FBS-low six starters. Urban Meyer proved in prime time that 2016 is no rebuilding year, despite losing 12 NFL Draft picks.

The Jig Is Up Award, for most prominent team to leave the Playoff race

Despite losing a close road opener at Texas, Notre Dame was seemingly still in the Playoff hunt with games against Michigan State, Stanford, and USC on the schedule. However, the Irish let those CFP chances slip away with the 38-26 loss to the Spartans at home on Saturday night.

And then head coach Brian Kelly's Twitter account accidentally (he says) liked a call for his defensive coordinator to be fired.

OK, OK! We believe you

AP No. 3 Louisville put themselves on the Playoff map with a 63-20 thrashing of Florida State at home. Now Heisman front-runner Lamar Jackson put up 362 total yards of offense and five touchdowns against a defense that was considered one of the most talented in the country. The Cardinals still have to play at No. 6 Houston and at No. 5 Clemson, so there’s still a lot ahead, but the Cards are officially a legit title contender.

The two teams that had the biggest jumps in this week’s AP Poll included Louisville, who went up seven spots all the way up to No. 3, which ties for its highest ranking in school history. Also pretty awesome was the fact that North Dakota State set an FCS record for the most votes received in a AP poll with 74. Congrats, Bison!

Also, the Coaches Poll somehow kept Iowa ranked, despite the Hawkeyes' loss to that FCS team.

Shocked Koala play of the week

Definitely goes to Ohio State’s Noah Brown, who caught this unbelievable ball one-handed, and on the defender’s back. 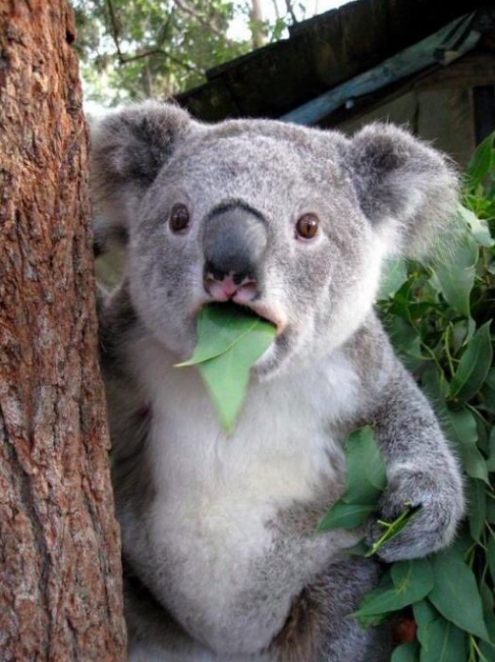 That’s a bold move, Cotton. Let’s see if it pays off for him

It’s probably a bad idea to schedule an FCS team that's now on a 6-0 run against FBS. Oh, and the same program that produced the No. 2 overall pick in the NFL Draft, quarterback Carson Wentz. Just a hunch. Just when I thought you couldn't possibly be any dumber, you go and do something like this ... and totally redeem yourself!

No. 3 Michigan took on an unranked Colorado team at home, and the Buffs were fired up. They wore the same uniform combo that they beat the Wolverines on a Hail Mary in back in 1994, and they'd made this fake depth chart to make fun of Jim Harbaugh’s roster secrecy. The Buffs led 21-7 in the first quarter and even held a 28-21 lead in the beginning of the third quarter.

But UM was able to score three unanswered TDs to win, 45-28.

Why aren’t robot refs a thing yet?

In the first quarter of OSU-OU, OU’s Joe Mixon had a 97-yard touchdown on a kickoff return. However, several plays later, after the play was well blown dead, Fox noticed that Mixon actually dropped the ball before he crossed the plane of the end zone, meaning it should have been a touchback.

This certainly would have been bad if the score had made an impact on the outcome. Do better, refs.

Also, the ending of Texas-Cal and the entire Ole Miss-Alabama game.

Piesman moment of the week

Alabama’s Jonathan Allen had himself a big-man, 75-yard touchdown against Ole Miss, and it was freaking glorious. I mean look at this thing. Welcome to Piesman Trophy candidacy, Mr. Allen.

The ‘What the hell was that?’ play of the week

This one was too easy. Somehow, Eastern Michigan managed to get three unsportsmanlike penalties to force it to kickoff from its opponent’s 20-yard line. Yes, it looks as weird as it sounds.

THIS. SEAT. IS ON FIREEEEE

I named Auburn’s Gus Malzahn the head coach with the hottest seat in the SEC West after his 29-16 loss at home to Texas A&M, falling to 1-2 on the season. Auburn is now 9-14 against Power 5 teams since the 2013 Iron Bowl's Kick Six.

Malzahn got a raise and an extension through 2020 this past July, bringing his annual salary to $4.7 million per year through Dec. 31, 2020. That makes him one of the highest-paid head coaches in the country.

Number of the week

I will never look at Kirby Smart the same way, nope.