Kevin Sumlin’s Aggies look strong on both sides of the ball, thanks to some smart moves.

Share All sharing options for: How Texas A&M’s gone from a stereotypical air raid team to a complete football team

Texas A&M’s strategic pivot over the last two years has been a stunning process. They’ve gone from being a full-throttle air raid offense with a dynamic quarterback and a suspect defense to a squad that relies on physical defense and a spread-option run game, still with plenty of passing.

Besides John Chavis, who brought a hard-nosed style to A&M’s richly talented defense, Trevor Knight has been another major instrument of change. After losing his job at Oklahoma when the Sooners converted to the air raid and elevated Baker Mayfield to QB1, Knight came to A&M as a grad transfer, serving as an emergency while Kevin Sumlin rebuilds his quarterback roster.

The result has been a remarkably sound offense that is running the ball and might combine with Chavis’ talented defense to get No. 9 A&M within range of another 10-win season.

One of the biggest changes that Sumlin made this offseason was bringing back OL coach Jim Turner.

Turner was at A&M from 2008 to 2011, when they signed and developed current NFL blockers Jake Matthews, Luke Joeckel, Patrick Lewis, and Cedric Ogbuehi. That credit has long been extended to head coach Mike Sherman, a knowledgeable OL guru, but it seems Turner might have been instrumental.

(Turner was suspended for two weeks in the offseason for crude jokes at a women’s football clinic.)

The current A&M OL includes just one returning starter and features underclassmen at all three interior positions, with a three-star true freshman, Colton Prater, at left guard. Despite the Aggies returning all four starting WRs, this line is the foundation.

Mazzone and Turner have built a spread-option run game that features several concepts (inside zone, pin-and-pull, draw, power, and counter-trey), with QB run and pass options attached, to allow linemen to double-team defenders.

The results on the ground have been quite impressive:

When two of your top runners are averaging nine yards per carry, you’re doing something very right. The Aggies rank third in the country in 30-yard runs after ranking 101st last year.

Sumlin and Mazzone had an inexperienced line, a transfer quarterback, and a talented assortment of receivers, and their takeaway was to build more around the run game?

Yes, and clearly they were right to do so.

The key to any spread is that it’s built around the skills of the quarterback. A&M surely knew quickly that it needed to go all-in with Knight. The problem is that Knight has always struggled with accuracy and simply can’t be counted on to operate an air raid passing attack efficiently. His passer rating this year is only 129.58, eighth among SEC starters, and it’s so far the highest of any season in his career.

But Knight is good as a decision-maker and runner in the option game.

This is a standard zone read, with a "bluff" scheme. The H-back (No. 9, WR Ricky Seals-Jones) arcs behind the line to lead block for the QB, while the OL blocks for the RB. Arkansas didn’t play the scheme well throughout the game, but Knight’s ability to cut upfield reduced the margin of error.

When a team uses the QB as a runner, it gains a numbers advantage up front, either by making one defender wrong with the option or using the freed-up blocker to lead the QB.

Some defenses respond by having the unblocked defender slow-play the QB, create hesitation, and allow time for the safeties to come help. Knight doesn’t leave you any time for that. He’s too fast and can beat you to the edge. Stopping him is going to require disciplined play up front, combined with either rangy safeties or cornerbacks who are good enough to play man coverage on the Aggies’ WRs, allowing the defense to bring an extra man toward the line.

That creates other advantages for A&M, such as man coverage for 6’4 WR Josh Reynolds, who already has 370 receiving yards and three TDs on the year.

The Aggies use Knight as a running threat in virtually all of their schemes, which boosts their offensive line.

For instance, when they are having linemen move on counters or sweeps, they’ll leave the backside end unblocked, so that Knight can hand off the ball if that defender tries to stop the QB run:

Arkansas has a sturdy DL, good LBs, and a sound defense, but the Aggies’ blocking on this play worked exactly like it’s drawn up on the chalkboard. 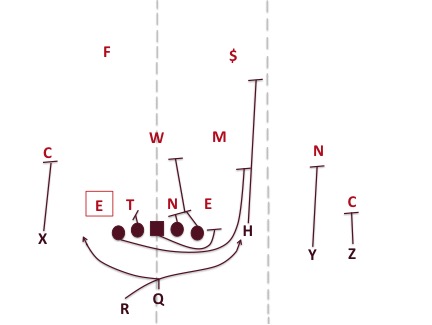 Center Erik McCoy is phenomenal at finding targets on the move. He and the tackles do good work in their combo blocks, leaving their mauling guards to finish the defensive tackles and then getting upfield and picking off second-level defenders.

The persistent threat of Knight in the run game gives A&M an extra man, which they use here to double team the nose tackle and open up a big crease for freshman RB Trayveon Williams. Williams finds easy creases, and his explosiveness is a nightmare.

Knight and Williams have combined for nine 20-yard runs, more than all but 12 entire teams.

The Aggies can also now make greater use of Seals-Jones, a 6’5, 240-pound receiver, as an H-back.

In a normal run game, the H-back has to be able to execute kick-out and lead blocks that require a lot of physicality and technique. However, since the Aggies option off an unblocked defender up front, they can instead use him to arc around and pick off linebackers in space. That’s a much easier blocking assignment.

RSJ having blocking duties also prevents his presence in the backfield from tipping off defenses that something like this might be coming:

Defense isn’t much fun when an offense can get plays like that out of their H-back on a flat route.

The Aggies’ ability to create easy leverage for their receivers is important in creating quick reads and open throwing lanes for Knight and for avoiding their OL having to hold up in pass protection. Their youth shows when trying to pick up blitzes and stunts, but Knight’s mobility and decision-making has saved them from disaster. Knight has only been sacked twice so far on the year and has escaped pressure and thrown the ball away to avoid costly mistakes.

Despite A&M’s spread formations, this is a team that’s looking to run the football and won’t hesitate to punt and lean on the defense.

The A&M staff has done a good job salvaging a talented roster, plugging in new pieces, and building an identity that happens to complement their phenomenal defense very well. Knight’s limitations as a passer and the OL’s youth will probably show up against opponents like Alabama or Ole Miss, but this is a good team that is well set to take advantage of a down SEC West.