The Irish let a QB battle linger too far into the season, but 11-1 is still on the table for a team with an offense this talented.

Share All sharing options for: Why DeShone Kizer is (finally) the right choice to lead Notre Dame's offense

When you lose a game in overtime, every marginal advantage you gave up stands out in stark relief.

For Notre Dame in its 50-47 opening loss to Texas, it was the three series featuring quarterback Malik Zaire that produced three punts that stand out, particularly the first drive after the half, a quick three-and-out that seemed to serve only to delay the eventual comeback, led by DeShone Kizer.

Zaire torched Texas in 2015, hitting 19 of 22 passes for 313 yards (14.2 yards per pass), three touchdowns, and zero interceptions (he'd suffer injury in Week 2 and turn the job over to Kizer). Against a vastly improved Texas featuring formerly prized defensive recruits who are now sophomores rather than freshmen, Notre Dame needed more. Bill Connelly graded nine teams with ongoing QB battles, and the Irish were the only ones to receive something worse than a C for Week 1.

Wednesday, Kelly named Kizer the full-time starter, according to Kizer, putting the Irish in their best position to win going forward.

In only 24 throws and 13 rushes, Kizer accounted for six touchdowns against Texas on Sunday night. Kizer has now fully demonstrated from his 2015 and early-2016 results that he’s the quarterback to make the most of Brian Kelly’s offense.

It emphasizes a downhill running game and spread sets, with the aim of back-breaking deep passes.

Kelly loves creating stress points with his elite talent, then punishing defenses for how they respond. He’s found that the best way to do this is to get big-bodied outside receivers, bruising linemen to push defenders off the ball, and burners to play to the wide side of the field. Stopping the combinations Notre Dame can put together with that dispersion of talent is exceptionally difficult.

The 2016 version is absolute dynamite. It starts on the offensive line, where the Irish have an elite left side, featuring 6'8 senior tackle Mike McGlinchey and 6'5 junior guard Quenton Nelson. When the Irish want tough yards, they can usually count on inside zone behind that pair’s mauling blocks.

On the boundary side of the field (the side closer to the sideline), the Irish have Equanimeous St. Brown, a 6’5 deep threat and a physical matchup problem, even for bigger defensive backs like Texas’ 6’2 Davante Davis:

But the Irish love to mix in two more, which push things over the edge: A QB who can add option elements to their inside zone and power run games, and who can also throw deep routes to the far hash to a speedster wideout.

Quarters defenses, which are somewhat in style, are designed to stop most anything in the middle of the field, but they often do it by leaving harder-to-defend areas near the sidelines, especially the far one. 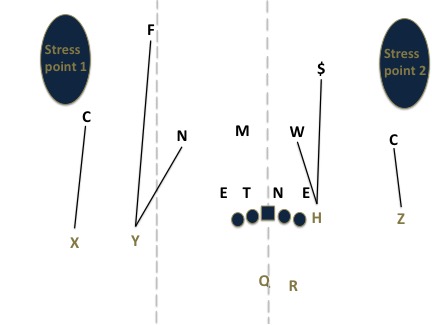 Quarters teams will get double coverage on the inside receivers, with the safeties and linebackers helping each other out. However, on deep throws to the sidelines, the corners are generally all alone. Beating a boundary corner is generally about throwing the ball where only a big receiver can get it (Stress Point 2), but beating the field corner (Stress Point 1) is about throwing to a receiver who can get separation in wide-open spaces. That requires accuracy and zip like Kizer's, because the ball is going to be in the air for a long time.

Offenses can also get an advantage against quarters defenses by mixing in the quarterback as a runner, as both Kizer and Zaire can do. Then the only way for defenses to get enough players to the point of attack is to involve the safeties, which further exacerbates the stress on those corners.

Kizer’s ability to attack the area I've labeled Stress Point 1 with Will Fuller took the offense to another level in 2015.

The plan for 2016 is to continue that trend by throwing bombs to Torii Hunter Jr. and others, plus continuing the QB run game. Last year, Kizer ran for 10 touchdowns on the year and 40 yards per game.

Zaire is technically the more dangerous runner of the two -- he averaged 5.4 yards per carry last year, to Kizer's 3.9 -- but at 6’4 and 230, Kizer's a real load to tackle. He has some quickness, particularly when moving straight ahead.

Against Texas, the Irish ran the y-stick/QB lead draw combination play that everyone loves very effectively. But Kizer also burned the Longhorns really badly with the basic zone read play. He ran for 77 yards and a touchdown on 13 carries, a 5.9-yard average.

Early, Texas' goal was to keep Notre Dame runners from finding the edge. But after getting burned by running backs in the cutback lane a few times, the Longhorns focused more on that lane. Kizer was ready to make them pay:

He’s probably got something like 4.8 speed in the open field, with a little bit of shake and lots of power.

Notre Dame didn’t really get the deep field bombs going. Texas features athletes who are rather difficult to test outside the hash marks, but you can see the kind of touch and anticipation needed to throw this wheel route:

One final attribute of Kizer’s that is evident in this clip, and that further sets him apart from Zaire, is how he handles the blitz. Texas loves to bring blitzes that are backed by man coverage and a high safety. Kizer doesn’t even seem to know the extent of this blitz, or he doesn’t care, because the Longhorns came very close to cleaning his clock from behind. It didn't matter; he knew he had a running back being covered by a linebacker who’d been showing a blitz. Kizer puts the ball right on the money.

Zaire tends to hold the ball and scramble for time, a high-risk/high-reward style that can get you into trouble. The better solution is knowing where to go with the ball and getting it out quickly.

A Notre Dame offense led by Kizer is not limited in the concepts it can run or the areas of the field it can attack.

A Zaire offense features a little more athleticism at QB, but it cannot take full advantage of the other studs across the roster. It can run into trouble when the opposing defense isn’t overwhelmed by Notre Dame's sheer talent.

Kizer subtracts a little bit of athleticism from the pocket, but adds a greater degree of skill. That gives Notre Dame one of the best offenses in college football.