The old and remodeled stadium isn’t exactly the legendary Orange Bowl, but it’s finally feeling like the true home of the Canes.

The No. 7 Miami Hurricanes take on the No. 3 Notre Dame Fighting Irish Saturday night in the biggest home game for Miami in at least a decade. With the Playoff-hopeful Canes undefeated, the game feels like the glory days of “The U” from the 1980s-early 2000s.

Saturday night also marks the the first time since 1989 that the Fighting Irish have played in Miami. Those Canes won that game and went on to beat Alabama for the national title.

It’s been quite a while since Miami has felt “back.” The Canes are now 8-0, coming off of a 28-10 victory over Virginia Tech. Second-year head coach Mark Richt has brought the swag back to South Florida, but he’s doing so in his own unique way.

Something that is no longer a part of the program is the old Orange Bowl. The stadium that saw countless Miami victories and was one of college football’s most-storied venues was torn down in 2008 and replaced with the new Marlins stadium.

Now, the Canes play their home games at Hard Rock Stadium, the often-renamed home of the Dolphins. No, it will never be what the Orange Bowl was, but Miami’s home stadium is becoming distinct in its own way.

The Canes have been playing here since 2008.

The stadium has been the home of the Miami Dolphins since 1987.

“I think the fans and team bring the college atmosphere to the stadium,” State of the U’s Cam Underwood told SB Nation. “The energy and enthusiasm definitely set the stage for the game, and while it is an NFL stadium, that's a positive, not a negative, in my mind. Miami's lease at HRS calls for stadium wrap on certain levels in the seating area. There's additional UM branding on the exterior of the stadium as well, so when you look around, there's plenty of Miami Hurricanes signage.”

What isn’t like most college stadiums, though, is that the stadium itself is nowhere near UM’s campus — it’s a whopping 22 miles away.

“The biggest problem is getting the students out there,” Zach Rivera, former football chair of the UM student government’s Category Five in 2011 and 2012, told SB Nation. “Especially when I was a student, is just the drive in the first place, because you’d have to convince the students to give up their weekends essentially to take an hour bus ride all the way over to the game.”

In 2013, the Dolphins announced a plan for a $400 million renovation, completed in 2016. One of the biggest changes was the structure atop the stadium to provide more shade.

The before and after of Sun Life compared to @ian693's photo is insane pic.twitter.com/9u1d61McN6

“You’re just sitting out there in the sun with absolutely no relief,” Rivera said of the old days. “And so it’s just constant heat, the sun bearing down on you.”

LED lighting will illuminate the spires from roof level. The outer edge of the shade canopy will also have lighting. In-stadium lights will be used during day games to even out lighting for TV purposes.

Two of the four high-definition video boards that will occupy each corner of the stadium are in place.

“I have some friends that are current students, and they talk about how sometimes the shade doesn’t cover the entire portion, but when it gets to the right time it covers the entire place, and it just gives fans a little bit of shade,” Rivera said. “And it makes you not only want to stay for the entire game, but it makes you want to stay in your seat, too.”

The tailgating scene is a unique one, combining college football with Miami culture.

“Tailgating at HRS is awesome,” Underwood said. “It's an NFL stadium, so there are huge parking lots and plenty of space for people to congregate and have fun. There's cards, dominoes, food, DRINKS DRINKS AND MORE DRINKS, youth football teams selling candy for fundraisers, and so much more.”

“[It’s] just filled with random Canes fans that are grilling, playing dominoes — that’s a massive thing, was the domino boards — it’s peak Miami,” Rivera said. “Then there’s other stuff that you’d see at other tailgates, but some of the food choices that I saw, you’d see authentic Cuban food being made at a tailgate. It was insane, but it’s awesome.”

During the poor AL Golden Era from 2011-15, the stadium was only known for empty seats.

Miami went 32-25, and although the average paid — key word — attendance was around 45,000, that number didn’t reflect the number of fans who came.

But since Richt’s arrival, those numbers have soared. Last season, Miami announced that the average paid attendance was 58,572. That was the program’s highest since 2004 (59,134) and fifth-best ever. During 2017’s game against Virginia Tech, the attendance was 63,932, just under max capacity.

“Miami is an event city,” Underwood said. “A Saturday night, primetime, national TV game is an event. It is no surprise that the crowd last week was awesome. I fully expect that to continue in the future. Miami is getting back to the kind of performance we all expect, and South Florida supports winners.”

Compare the pre-Richt years to the current scene: 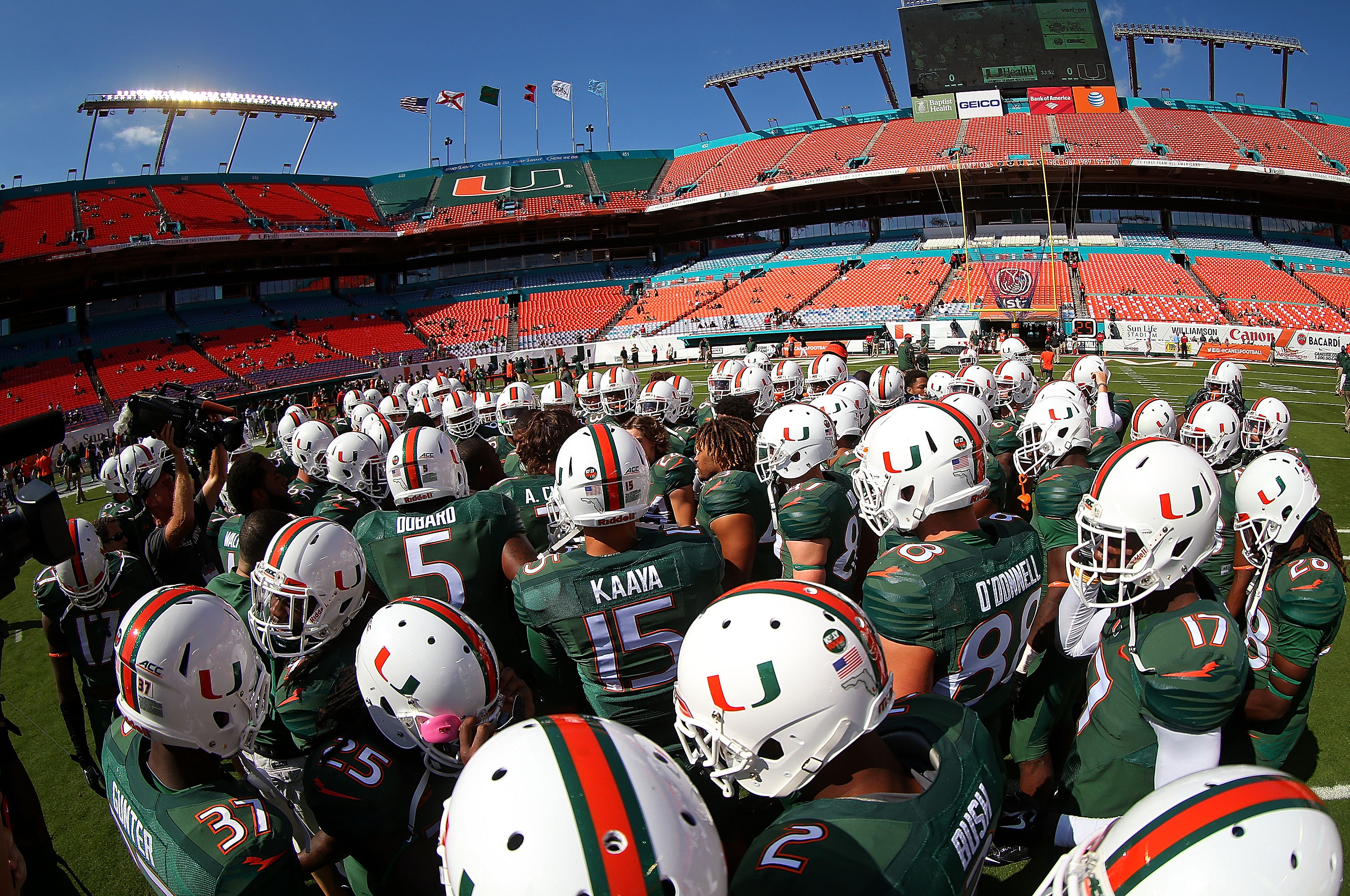 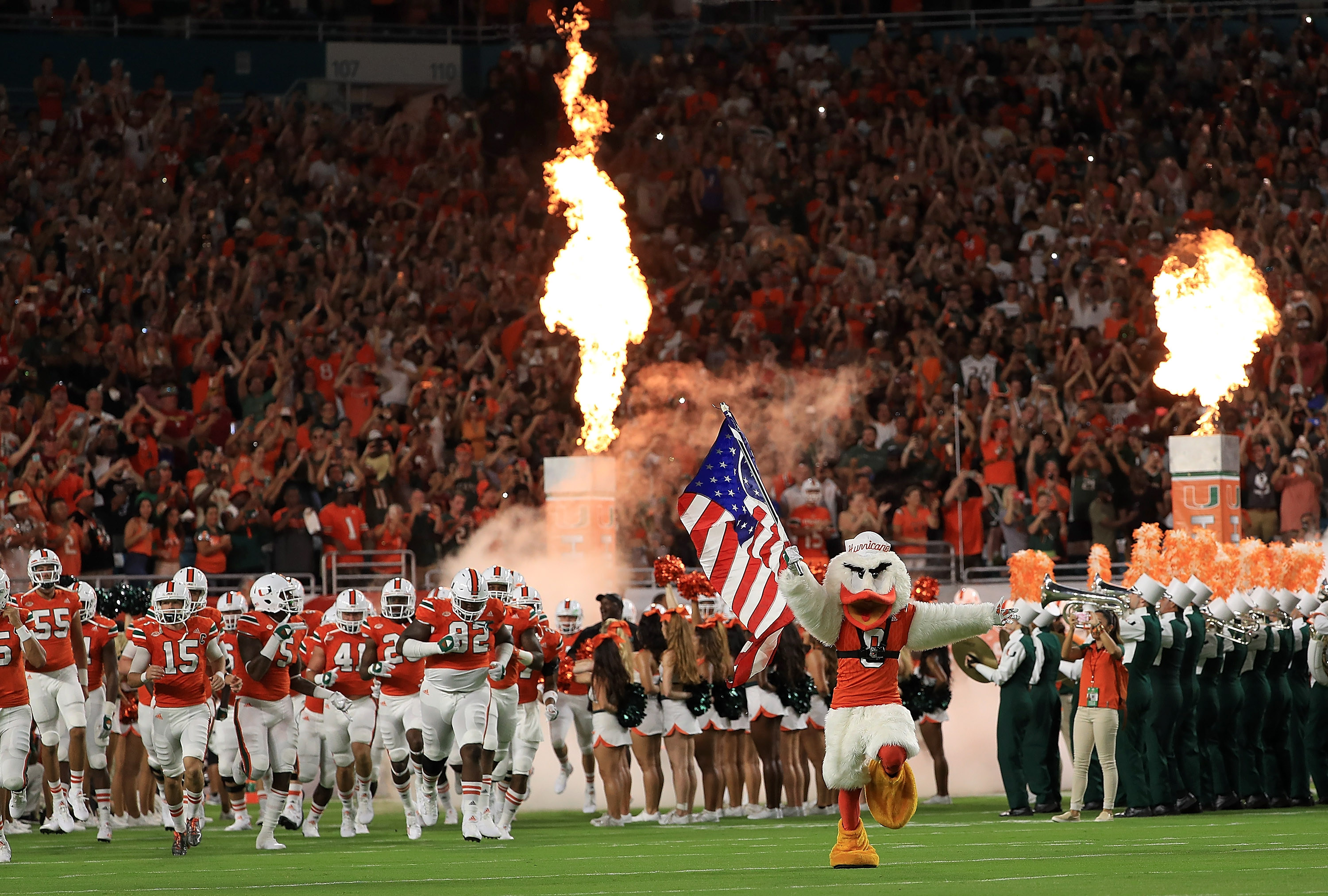 “They’ve been through a lot with us throughout the years,” receiver Braxton Berrios said of the fans, via the Miami Herald. “They deserve just as much as a lot of people on this team. They’ve been through the bad times, and now they’re finally in the good times.”

“They change everything, they really do. That is a huge advantage when Hard Rock gets going like that,” Berrios said.

Since the Canes moved in, there have been just two games against top-10 opponents: No. 8 Oklahoma came to town in 2009, which Miami won, and No. 2 Florida State in 2014, which it lost.

Saturday night’s game won’t be played in the Orange Bowl like the last time Notre Dame came to town, but the swag is back and Miami is good again — you can bet Hard Rock Stadium will be rockin’.