The stories behind the slick alternate uniforms for Army-Navy 2018

Every year now, Army and Navy bring out new threads for the game of the year. Here’s how 2018’s came to be.

Share All sharing options for: The stories behind the slick alternate uniforms for Army-Navy 2018

The Army-Navy Game is Saturday, and one of the coolest parts about this annual December matchup is the uniforms both teams wear They’re always changing, and for or 2018, both sides are wearing special threads to honor specific people in the branches’ history.

Army is wearing “Big Red One” uniforms to honor the 100th anniversary of the army’s 1st Infantry Division helping to end World War I.

The 1st Division was the first American unit to directly fight German forces in WWI.

President Woodrow Wilson ordered the division to assist Allied forces, and one of the infantries helped win the Battle of Cantigny in France in 1918. That was the first major American offensive of the war effort. More:

President Woodrow Wilson promised the Allies he would send “a division” to France immediately, but the Army had no such divisions. The United States quickly ordered four infantry and three artillery regiments from the Mexican border in Texas to Hoboken, N.J., to board transports to France. That group of seven regiments joined together to officially form the “1st Expeditionary Division,” later the 1st Infantry Division, under Brigadier General William L. Sibert on June 12, 1917. With more than 28,000 men, the “Big Red One,” as the division was later nicknamed from its shoulder sleeve insignia, was twice the size of either the allied or German divisions on the Western Front.

The sleeves of the jerseys honor the Black Lions of Cantigny. That’s the nickname for the 1st Division’s 28th infantry, which emerged victorious at Cantigny:

As for the Big Red One patch (a literal number 1) displayed prominently on these uniforms’ helmets, there are a couple different stories about the origins of it. One is that 1st Division supply trucks had the red 1s on them to make them stand out from other countries’ vehicles, and that the 1st flowed out to shoulder sleeve patches from there:

But another tale suggests that the red number on the patch actually originates from red underwear. Army explains:

The general, thinking that the 1st Division needed a shoulder sleeve insignia, cut a crude red “1” from an old pair of flannel underwear. Upon seeing the patch, the lieutenant, whom some accounts name as Herbert M. Stoops of the 6th Field Artillery, then remarked “The general’s underwear is showing!” In reply, the more senior officer said something to the effect of, “All right young man, if you’re so smart, come up with something better!” The lieutenant took up the challenge, producing a patch with a red numeral “1” on a gray or olive drab shield using cloth from a captured German uniform.

Also featured on the back of the helmet is the United States’ flag at the time of WWI, which features only 48 stars, as Alaska and Hawaii weren’t added as states until later.

The uniform’s collar badges pay tribute to bronze collar disks that were worn by enlisted soldiers in the 1st Division:

These are pretty sweet uniforms with a whole lot of history to them.

A goat has been Navy’s mascot since the late 1893. Officers from the U.S.S New York, a naval transport ship, gifted a goat named El Cid to the Naval Academy. The school adopted it as the honorary mascot for that year’s Army-Navy meeting, and after the Midshipmen won, the goat became a team mascot.

The sleeves of the jersey are navy blue in color and feature two stripes on the outside with the Navy logo in the middle. This just like Bill the Goat’s blanket, which he wears during games. Billy is featured on the side of Navy’s helmet, and on the cleats, too. 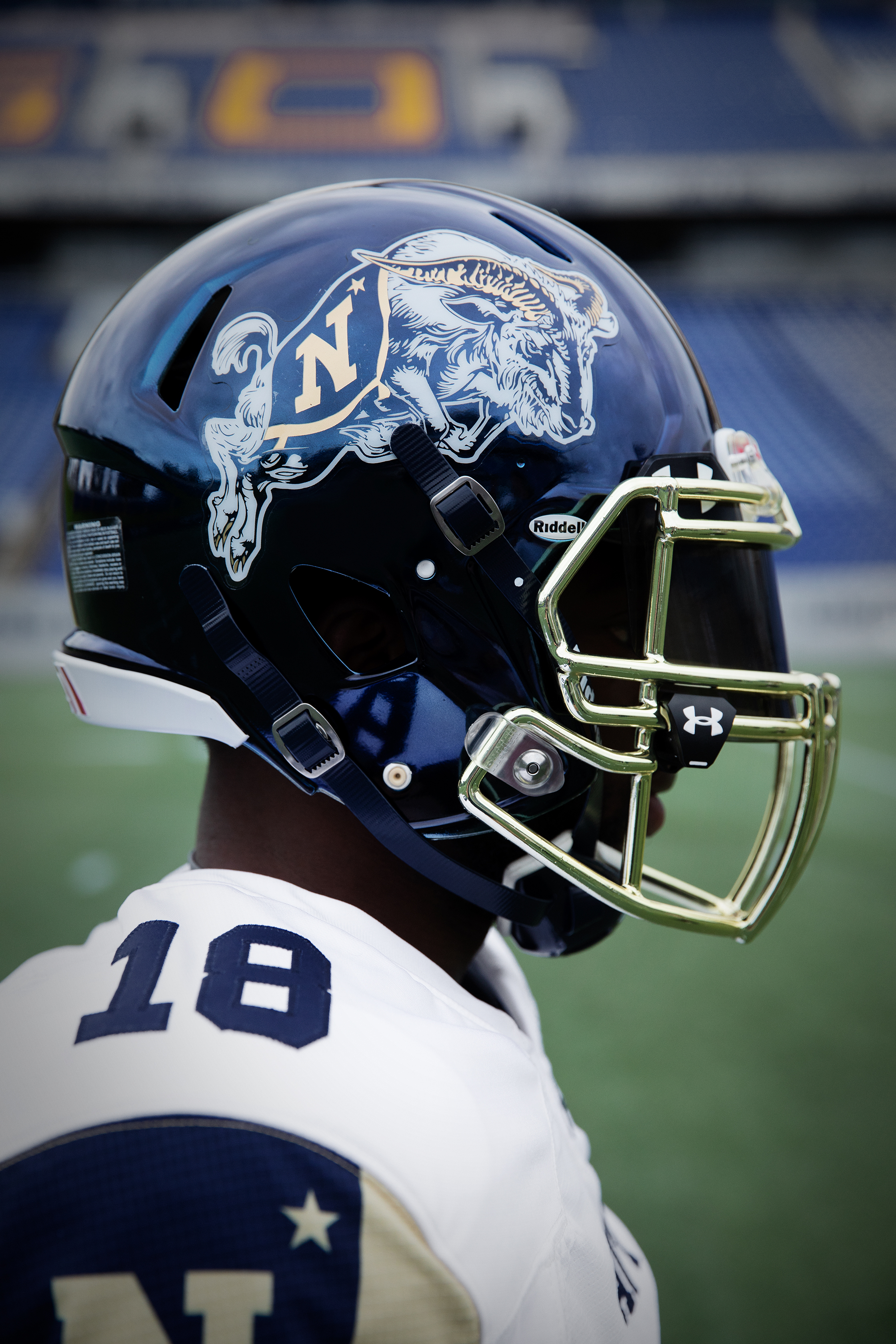 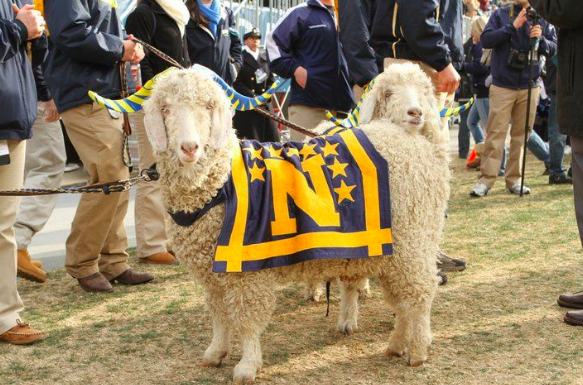 These teams wear awesome uniforms for this game each year.

It hasn’t always been a tradition to wear new alternates each year. Nike started making special Pro Combat sets for both teams in 2011, and the alternates were on and off before that. (Navy has since moved to Under Armour, while the USMA’s still with Nike.)

Army wore digital camo pants in 2008, while Navy wore uniform patches with a nod to the Marine Corps:

It was just the start of what would become tradition. In 2009, Army stayed with its normal look, and Navy brought back its 2008 set for the game:

The 2013 game had snow, which was pretty neat to see with Army’s white tops and grey pants worn. Navy had a nice blue top, white three-tiered helmet look to its threads:

The 2014 game had a new variable in the equation. Hello, Under Armour. UA was able to sign the Midshipmen athletic program to a 10-year deal, and the Maryland-based apparel giant pried them from the swoosh:

In 2015, Army and Navy started getting wild with the helmets. And we were all the better for it. Navy patterned its lids after different naval vessels and, woo buddy, am I ever in love with these bad boys:

Army went with a matte finish. One side had a uniform number, and the other side had the division of the Army each cadet would serve in upon leaving school:

In 2016, Navy honored 1963 uniforms, and one awesome thing about them was the stars on the helmet. They signified each year Navy had beaten Army on the field consecutively. A light flex over your rival is always appreciated:

And Army leaned heavy into the all black as a nod to paratroopers:

Of course, Army ended Navy’s 14-year winning streak in 2016 and won the next year, too.

The tradition of dueling alternates has come a long way, to the point where these uniform unveilings are now an event on their own every year.

For more on Army-Navy,

check out our service academies blog.
Against All Enemies