Someone claimed to have found an abandoned rivalry trophy. UConn message boarders immediately sniffed it out.

Share All sharing options for: Someone claimed to have found an abandoned rivalry trophy. UConn message boarders immediately sniffed it out.

A video posted to Twitter has some UCF and UConn fans riled up, and it’s thanks to the appearance of the “rivalry’s” Civil ConFLiCT Trophy. The trophy, which seemingly disappeared after the 2016 game, looked to have resurfaced:

I know millions of you have been wondering what I’ve been up to lately so I figured I’d get a hold of ESPN and make a documentary. Unfortunately, they couldn’t fit me in their schedule so I went ahead and did this one myself. Enjoy! #SettleTheConFLiCT pic.twitter.com/mWUnqZdG9O

The account even made known where it’d been spending its time:

I’ve been traveling between Connecticut and Florida. I’m an east coast fella, you know? #SettleTheConFLiCT

Sure, at first glance it looks like the trophy is in fact back:

But a clever UConn message board user by the name JMick pointed out that the font is different than the Civil ConFLiCT Trophy awarded. The one on the sidelines in 2015 and 2016 had a font similar to the one from the video, but it’s not exactly identical: 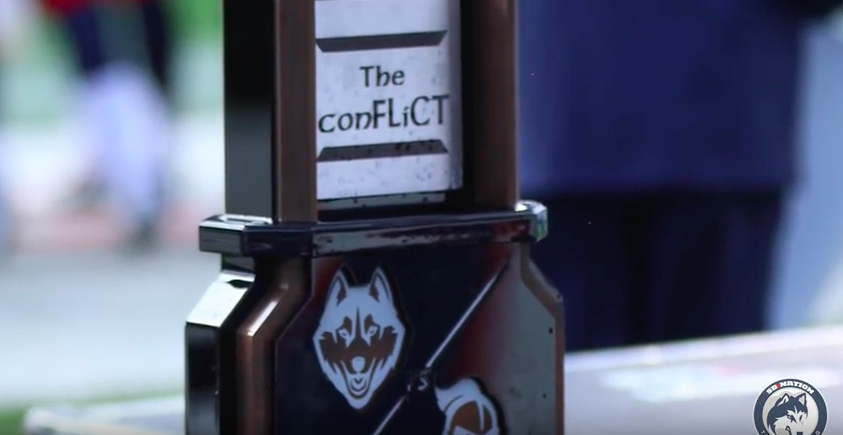 The silver plate in the fake one looks bigger, and there’s a bit more open space in the real trophy’s plate. The font on the fake one is also bigger and bolder, and there’s less curvature in the h and n letters. The c is also different. The two lines surrounding the font appear thicker, too.

But you gotta tip your cap to the the fake trophy’s creators, making their font look somehow even more dramatically awful than the real trophy’s font.

The original trophy that was released in the summer of 2015 had an all-caps font that looked like this:

First day back on campus for #UConnFootball! And just 130 days until the next Civil Conflict with @UCF_Football ! pic.twitter.com/RgOkXiob0T

Per The UConn Blog’s Aman Kidwai, Diaco made aesthetic enhancements after receiving some negative feedback on the initial version — that’s why those two fonts are different. Kidwai agrees with the message boarders that believe the seemingly resurgent trophy is fake, too.

Wait, so what happened to the original one?

We’re excited about this North/South battle. You want to call it the Civil Conflict? Maybe I’ll win my money and make a trophy. I’ll buy it myself. Put a big giant Husky and a big giant Knight on it. Make a stand. Put it in our hallway. The Civil Conflict. The loser, maybe they’ve got to put nutmeg on the stand when it’s not there and we’ll put a sack of oranges.

Just checked w/ @UCF_Football: "We have no involvement with the trophy or creating a rivalry game with UConn." They were surprised by tweet.

And didn’t wanna participate, either:

UCF lost in 2015, allowing UConn to keep its trophy.

Frost gave a diplomatic answer when I asked about the #ConFLiCT Trophy snub. But yeah, UCF clearly wanted no part of it. pic.twitter.com/TVvbDbrjkr

Early morning shade from #UCF in the game notes!

"Because it was never a thing" - RIP #ConFLiCT pic.twitter.com/V7IoCHF1ao

Even Diaco himself has seemingly denounced his own creation:

”I’ve eliminated it from my mind,” Diaco said, per the Hartford Courant in 2017. “I put the experience in a chest, locked it, dumped it into the ocean, and I threw away the key. That’s the important thing. I’ve thrown the key away. I don’t even know ‘it” or what you’re talking about. Because I’ve eliminated that whole painful part from my mind.”

In the Knights’ game notes for 2018’s matchup, there’s no mention of the trophy, but the team calling it “a great rivalry” is apparently poking fun at the Huskies.

One of the great rivalries The American East Division has to offer kicks off in less than a week!

“As far as I’m concerned the rivalry lives on,” Kidwai says via email. “As long as you believe it is still alive. It’s like Christmas spirit in Elf.”

“One last thing I will add is that while this was obviously a crazy idea, there was some merit to it,” he continues. “And if UConn wasn’t terrible in what turned out to be Diaco’s final year it could have continued to be a fun thing. Long live the ConFLiCT.”

“UCF Football actually acknowledged the rivalry so it’s gotta be a real thing now right?” The UConn Blog’s Daniel Connolly adds. “For all the really bad things Diaco did at UConn, I will forever say the ConFLiCT was a great idea just executed so, so poorly. I mean, nobody cares when UConn and East Carolina play because they have no history. Why would anybody care about UConn-UCF without the ConFLiCT? But because of it, every single time these two teams play (Hopefully not that long because that means UConn gets out of this conference), there’s going to be excitement and intrigue.”

You mean the trophy that’s every bit as contrived as the “rivalry” it was intended to commemorate?

So I personally called the communications department at UConn prior to last year’s game and asked them, point-blank, where is the trophy? Their response: “We don’t know.” They sounded like they were pretty tired of being asked and I have no reason to doubt them when they say that. But it seems UCF isn’t the only ones who want to run as far away from this idea as humanly possible.

Let’s give Bob Diaco some credit here for a second. He wanted to do something in his first season at UConn to get his team up for that game in 2014, and it worked. UConn handed UCF its first conference loss in two years, 37-29, and that game actually really hurt UCF more than it helped UConn.

The Knights finished 2014 in a three-way tie for the AAC crown at 7-1. UCF would have finished the regular season as outright undefeated AAC champs for the second straight year (there was no AAC championship game that year). They also could have finished the season with 10-plus wins for the third year in a row, with a possible outside shot at a New Year’s Six bowl for the second straight year.

Instead, they shared the title with Memphis and Cincinnati and then got beat in the St. Petersburg Bowl by NC State. UConn finished 2-10, with their only other win coming against Stony Brook. So the gambit worked, I guess.

It appears Diaco’s original ConFLiCT Trophy is still nowhere to be found, but at least these clever internet folks gave us some hope for a little while.

(H/T to Kidwai and the folks at The UConn Blog for their assistance here.)

The UConn Blog’s got you!
Long Live The ConFLiCT Merchandise