Quinnipiac, UMass-Lowell, St. Cloud State and Yale are the four regional champions heading to Pittsburgh for the 2013 Frozen Four.

How did the four teams get to the Steel City? Let's go to the bracket. 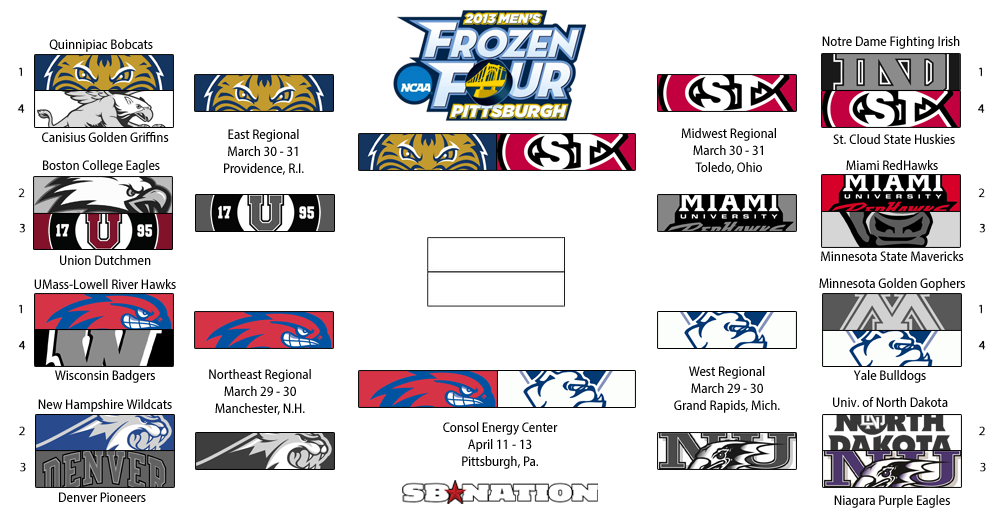 * Yale makes most of second life

* Frozen Four by the numbers

The top-seeded Quinnipiac Bobcats escaped a scare from Canisius in the opening game of the East Regional, ultimately scoring three third period goals en route to a comeback 3-2 win. They then rode a Matthew Peca natural hat trick -- the fastest in NCAA tournament history -- to a 5-1 win over their ECAC Hockey rivals in the regional final. It is their first Frozen Four.

QU's opponent, the St. Cloud State Huskies, rolled 5-1 through the Midwest Region's top team, Notre Dame, in their tournament opener. They then followed freshman Joey Benik's two goal performance past Miami and to their first Frozen Four. The Huskies had just one tournament win in eight apparences before this year.

Yale is making their second Frozen Four appearance in school history -- but it was all the way back in 1952. Their improbable run to the Frozen Four began by backing into the NCAA tournament thanks to a Notre Dame win over Michigan in the CCHA Tournament final. Yale then topped Minnesota with a shocking win nine seconds into overtime in the West Regional semifinal and then eased past North Dakota, 4-1, in the regional final.

UMass-Lowell enters the Frozen Four as the favorites in Vegas. The Hockey East regular season and tournament champs have compiled a 24-3-1 record since a 2-0 shutout of Northeastern on Dec. 8. They've used a defensive-minded system throughout their run of success, allowing just one goal so far in the NCAA tournament with a 5-1 win over Wisconsin and a 2-0 win over New Hampshire propelling them to their first Frozen Four.