Share All sharing options for: The 2012 Tour de France: A Viewer's Guide

The Tour de France is the world's longest bike race named the Tour de France, and it will be on your television shortly. Your sporting alternatives at eight in the morning are scanty, so it's best to acclimate yourself now to the rigors of the world's most French endurance event now before you have to do something truly desperate for sporting entertainment. (Plus, the bonus of breakfast sports on US time! They're the most important sports of the day.)

The route for the 2012 Tour De France is as follows: 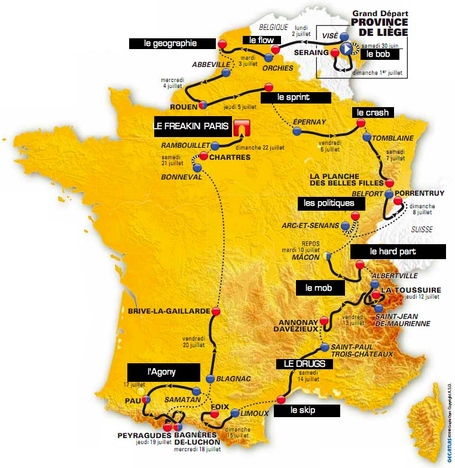 Stage one will be LE BOB. This refers to Bob Roll, who was the best thing about the Tour's coverage in 2007, and is still the best thing about NBC Sports Network's (formerly Versus) coverage of the event. Roll, a former sideman and domestique to Lance Armstrong, knows you don't know anything about cycling, and that's cool because Bob Roll doesn't know anything about broadcasting. It's a good kind of ignorance: Roll is just as likely to make a garbled but salient observation about team strategy as he is to trot out a good emergency poop story mid-broadcast, and you'll be the stunned, but pleased beneficiary.

Stage two will be LE FLOW. Watching the TDF is never about rapt, constant attention. Fold some laundry, read a book, weld something you've been meaning to weld, and it will still be there when you need it.

The broadcasters know this. That's why most Tour coverage is gentle patter interrupted by Phil Liggett blurting out impassioned "AND HERE'S REALLY SOMETHING NOW" to let you know that yes, something is happening and you should pay attention. Otherwise, the TDF is chillwave sporting viewing. Put on some Washed Out for like 60 percent of it, and you'll get the general vibe.

Moving along through the early sprint and road stages, we get to LE GEOGRAPHIE. The people covering the Tour go to great lengths to cover every possible camera angle imaginable. Helicopters hover above, capturing breathtaking French scenery with the peloton streaking along through it like a blob of anorexic neon jellyfish. Cameramen stand on the back of cruising motorcycles to get within feet of the riders, and assault winded podium-winners the instant they get off the bike.

Two thoughts go through your mind watching this. The first: the French really have a more relaxed attitude toward personal injury and liability than we do, since the entire event is a shoving match between bicycles, mopeds, motorcycles, cars, and sometimes spectators funneled through tiny European roads.

The second thought is usually, "I had no idea France looked like that." The scenery is part of the allure of watching the TDF, with the nation of France scrolling by like some medieval CGI fantasy. Oh look, a castle just out of f****** nowhere. And another. Here's the most beautiful field of flowers you've ever seen, and now a village straight out of Assassin's Creed. There's some people just chillin' in the Pyrenees drinking wine at one in the afternoon, and now a guy in a devil suit is chasing the riders through an alpine moonscape.

The fourth stage will be LE SPRINT, or the part that's anything but chill. Sprints at the finish are dramatic, but you're really not watching for the sprint stages. They're an appetizer for the mountains, albeit exciting ones that really make you question the effectiveness of your current leg workout. (Sprinters legs are the size of country hams.)

Along the way, there will be the part you may not want to enjoy but will watch for anyway, LE CRASH. You have reasons to be wary: people can totally die in high-speed races like the TDF, or more recently the 2011 Giro d'Italia. They can also crash in more spectacular and less fatal ways: flying off mountains, into trees, or spilling through the peloton like errant bowling balls and flattening twenty riders at a time.

There is no good crash, and we'd like to acknowledge that. However, there is a best crash, and it is this one.

The dog would like to know if you still love it, and sorry he turned your front wheel into a taco, and wag wag wag he'll just be over here if you want to pet him, mad guy in tights.

Winding our way up to the Alps, you will then pass through LES POLITIQUES. The politics of the peloton are complex, but here's an important overview of the offices and positions within the main group of riders.

There is a Minister of Sandwiches. He coordinates the dispersal of all sandwiches, and only gives people he likes the best sandwiches. He is the most powerful man on the tour. The Overfiend of the Pissoir, noted for his yellow jersey, controls the peloton's bathroom breaks. These are taken collectively, and usually on someone's property without even asking them.

The Herald of the Avoidable Obstacle just yells a lot about stuff everyone can see from miles away. No one likes him, and everyone hates him, but traditions are traditions. The Blood Czar ensures that everyone has at least 15 minutes to change their blood completely each day. There is also a Barrister of the Shapely Peloton who ensures an aesthetically pleasing form for the group as they pass through the countryside, and the Minister of Nickels who pays all tolls by carrying hundreds of pounds of dimes. He drives a motorcycle by special exemption, and is not even a cyclist.

None of this is true, but it makes more sense than much of what actually goes on in the peloton.

Reaching the slopes of the Alps means you have now reached LE HARD PART. This makes for the best viewing, because, after racing several hundred miles already, professional cyclists must race up slopes most cars have difficulty negotiating without complaint. The human body puts out as much energy as a toaster oven at this point, and teams go into overdrive attempting to rope in breakaway riders. There is an inverse relationship between the scenery and the degree of pain: the more majestic the backdrop is, the closer the riders are to openly wishing for a swift death by avalanche.

Through the mountains, the influence of LE MOB will become more obvious. The crowds at the Tour de France are the closest in sport, often running alongside riders and waving flags in their grimacing, sweat-drenched faces. The silent agreement between riders and fans is this: get as close as you like, but a) do not knock me over, and b) do not complain when I decide you should be hit in the face. Again: the French have a different understanding of liability than we do.

Coming down from the mountains, we will now begin testing positive for LE DRUGS, all of them, in every variety. This is not because cyclists like drugs. (We're sure some do.) This is because this race destroys people, is inadvisable for anyone's health, and has always sent riders running to the medicine cabinet for something, anything to help them recuperate. People have done cocaine during stages trying to compete in this race. People have taken strychnine, done poppers, had dangerous blood transfusions performed, and blown themselves out of their brains on meth-amphetamines just to finish, much less compete in the Tour.

Someone will be caught. It may be the eventual winner, so don't get attached to too many rankings. Be suspicious of that guy who dragged ass until the 13th stage and then suddenly raced like someone five years younger two stages in a row. He's probably mainlining gorilla adrenaline and jet fuel and will be out of the race the following day after his drug screen explodes in the lab.

Once in the coastal flat lands, you may perform LE SKIP. The riders take a few rest days, and so should you because frankly, as pretty as they may be to watch, many of the flat stages not involving time trials are less than interesting.

Save your energy for a second round through the mountains and L'AGONY in the Pyrenees. If the Tour is not sewn up by now, you will be treated to at least one dramatic torturefest where one rider "breaks" another to build an insurmountable lead their team will then protect as a group. When a TDF rider "breaks," he slows down. The average person going through the same physical stress would explode, and leave a body so ruined the jackals and vultures would skate by it going "LOLnope."

Then, because this is the most French of events, the TDF finishes with a luxury item: a stage that rarely means anything, and is instead just a chance for riders to relax and parade their ravaged selves around Paris. The race could theoretically require some racing here -- it has happened -- but most likely, you won't be watching this stage, and will instead simply watch the footage of the winner sipping champagne on a bicycle*.

*Please notice that after viewing this, the man who drinks forties and rides his bike around your neighborhood will be 10 times funnier, because you will never see him again without thinking he's just won the world's most jankety bike race, and is on some kind of eternal, shirtless victory lap. Which, you know, he might very well be. Congratulate him both on his achievements, and on his attainment of a low-stress, low-maintenance lifestyle.

Tour de France 2012: Bradley Wiggins All But Wraps Up Victory