There's some insane people lining the small mountain roads the Tour de France peloton winds its way up as the race hits the mountain stages. Hoards of people pack the sides of these small, essentially one-lane roads, leaving just enough room for riders to squeak by. And then there's the attention-seekers trying to make a name for themselves on TV -- like the guys with flares who nearly started a war with the peloton on Friday.

Bringing flares as riders ascend a mountain really isn't a good idea in the first place. Getting close enough to the group that riders are inhaling smoke is worse. And burning Bradley Wiggins, the Tour leader and man in yellow ... well, that's about as dumb a thing a fan can do.

Of course, the peloton fought back, and it was pretty great. Man burns rider with flare, gang of cyclists start pelting man with water bottles. Wiggins had an entourage, and they were ready for water bottle warfare. 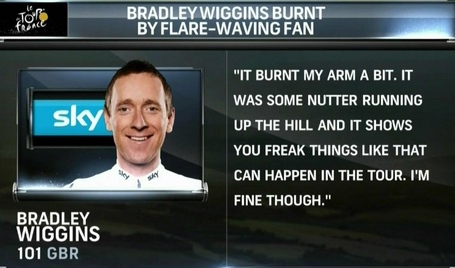 Tour de France 2012: Bradley Wiggins All But Wraps Up Victory