On Paris and the Tour de France ... and farts as an allegory.

The French have a delightful expression that goes Il pète plus haut que son trou. Translated, it arguably sounds better in English, though the French deserve all credit for coming up with it. It means "He's farting higher than his hole." The ass hole, specifically. The nicer phrase might be "He's biting off more than he can chew," but that doesn't convey the pretentiousness that Il pète plus haut que son trou is meant to undercut.

That the French own the expression may be a recognition of their own incorrigibility. The best inventions often address endemic problems, and after traveling around the country for the Tour de France, there were spots where Il pète plus haut que son trou could have come in handy. For example, a mountain hotel desk closing at 6 p.m. on its busiest night of the summer, leaving a dozen-plus guests stranded. Or customer service agents that ask you to call right back with a reference number, then in the intervening minutes take off for a two-hour lunch. Or the gas stations and rental car desks that absolutely can't take your credit card, pas du tout.

What to do about fans?

The Tour de France should do something about the dangerous proximity of fans to riders, but doing so could hurt one of the world's best live sporting experiences.

The life of a Tour de France super fan

What to do about fans? The life of a Tour de France super fan

C'est comme Ça, monsieur ... "It's just like that" was the most common response to my steady succession of quibbles in a country where everything works, but never quite right. I filled up for gas in a mall of autobody shops just north of Carcassonne. I didn't prepay with cash or a credit card, I simply filled up then milled around looking for a way to pay. There was no machine to take my money, and apparently nobody to help. I eventually found the desk several doors down. When the disaffected clerk told me it would be 60 euros, I asked him how he knew nobody will take off with free gas. He couldn't say, he just knew that no one had. Even the thieves comport with protocol.

As usual, the problem is history. The French live within monuments -- the country is filled with plaques telling you why this very spot was pivotally important once upon a time -- and were raised on the notion that nothing should be touched lest something be lost. On Saturday, I walked through Périgueux, the host of the finish for this year's time trial and a city I once lived in four years ago. Nothing had changed. Some parts were pretty, some were crummy, the buildings were still white and not one storefront had moved from where I left it. 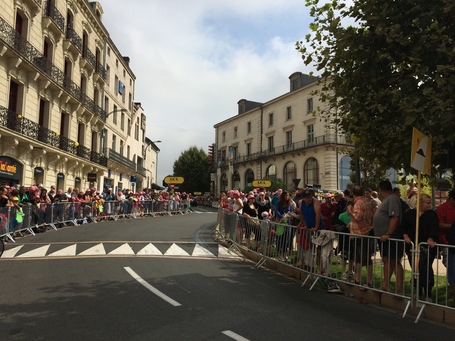 Inside 500 meters to the finish in Périguex on Saturday.

Many praised the celebration that took place in England for this year's Grand Départ, especially in contrast to the welcome that greeted them for Stage 4 in Le Touquet-Paris-Plage -- a beach town for rich stiffs that couldn't be bothered to create a warm atmosphere beyond installing the mandatory structures that show up at every start. The same feeling greeted me in Grenoble, where there was little in centre ville to indicate that the Tour de France was taking place that day. (In fairness to Grenoble, it has been a stage town 40 times, so there may be some fatigue.)

It isn't arrogance. Rather, the French have a tendency to let things speak for themselves, and let you make what you will of what they say. Laisse tomber is another French favorite, and it means, essentially, let whatever happen with full knowledge that it will somehow be dealt with later. Perhaps at the expense of someone else's time and sanity, sure, but France always manages to get done what it needs to.

The French live within monuments and were raised on the notion that nothing should be touched lest something be lost.

The important thing is that tradition never be interrupted, and so we finally come to the Tour's last day, a long and leisurely parade of the world's best cyclists down and around the city's busiest street and roundabouts. It will be a glorious inconvenience to all. To actually see the thing will almost certainly mean modified metro service that can't be explained by simple placards. Rather, huddles of city employees in bright green vests will be stationed just outside the trains to point you down labyrinthine corridors. They'll talk until you go away, then finish their sentence on the next person in line.

But then you'll see what you came to see, the Etoile finally rid of honking and diesel fuel, and returned to a more natural state as a backdrop to cyclists. France is still committed to showing Paris as Haussmann envisioned it, and the Grands Boulevards are admittedly an impressive sight. Mild inconveniences fall away once you've been washed in grandeur that was implemented 200 years ago.

That such a geographically and demographically diverse country can be so similar from town to town is the result of a philosophy that is one of the few things that  are well-implemented in France. The French will never do too much not because they're rude, but because they don't see the necessity.

They're farting higher than their holes, sure, but not on purpose. It's in their nature to foul the air, so that when it clears we find splendor again in the way things had always been.