SBNation Fantasy's new Fantasy Targeter series debuts with rankings for almost 100 NFL cornerbacks to help you identify the best matchups for your wide receivers to exploit.

Matchups are the great weekly equalizer in fantasy football. Hopefully, you chose (or will choose) your roster based first and foremost on each player's total projected performance -- how well they'll do over the course of the entire fantasy season. If fantasy football was played in a season-long rotisserie format like many fantasy baseball leagues, you could sit back and relax. Since almost every fantasy league is played in a week-to-week matchup format, however, your work has just begun.

Each week, you'll be making start or sit decisions for guys on your roster, and the biggest factor that will determine their success is who will line up across from them on the opposing defense. As no position in fantasy is as matchup-dependent as wide receiver, knowing which cornerbacks to target or avoid can mean a major swing in your weekly point total. But while everyone knows Darrelle Revis is a stud, who the heck knows how to evaluate the nearly 100 corners (counting nickel/slot guys) who'll be lining up every week?

And we're in a sharing mood.

Introducing the Fantasy Targeter - a weekly feature on SBNation Fantasy that will help you pinpoint the defensive matchups to go after. This feature, combined with our weekly Start/Sit column, will give you a crucial edge as you make your lineup decisions.

This pre-season edition of the Targeter is going to present our pre-season evaluations of the 96 left, right and nickel corners slated to start for their teams this season. We'll run a regular Week One edition focusing on matchups to go after in the first week, but we wanted to give you this full breakdown to refer to if you're still waiting to draft your team. This information is also presented in greater detail in our Free Fantasy Guide, available as a 65MB PDF download.

Below are the charts for the corners who will be lining up at each position for each team. The corners listed in bold and italics are the 'move' corners in the league - the guys who more often than not will follow an opponent's best WR no matter where he lines up. Since these guys tend to be among the league's best cover men, it's always good to know when one of your wideouts might be facing one.

The 'Proj. YPA' is the projected Yards per Attempt that the corner will allow this season. While YPA is a great overall measure of effectiveness, it doesn't tell the whole story - that's why we've also included the Projected Cornerback Rating (C-RATE) for each guy. It factors in their projected YPA allowed, Passer Rating Against as well as an 'eyeball test' based on their overall level of play and responsibility in the defense. Lower is better for the cornerback, and higher is better if you're looking for a guy to target in a matchup.

Without further ado, here are the pre-season cornerback rankings (each image is clickable to view a higher-res version): 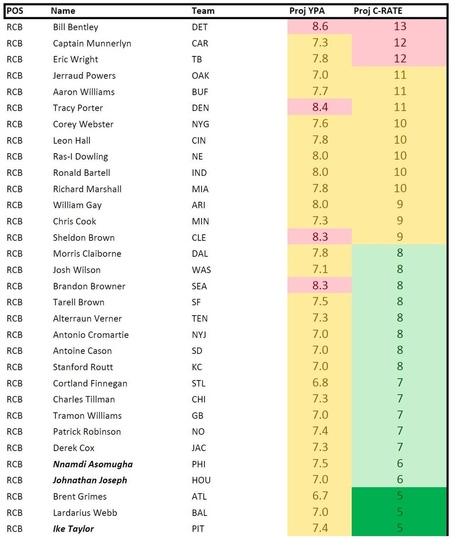 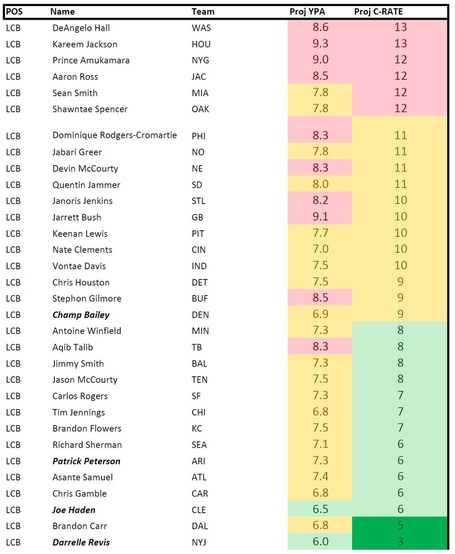 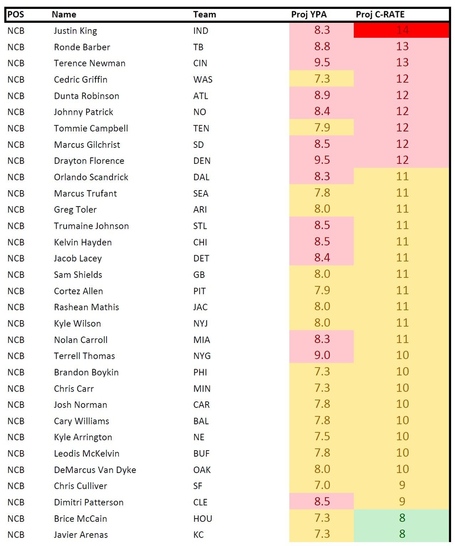 Check back each week for updated rankings, as well as ideas on which matchups to target and avoid.