Nate Burleson didn't take long to make an impact in his return. Here are seven others that are worth a look in standard-sized fantasy leagues.

There were actually quite a few receivers to turn some heads in Week 12, so fantasy owners might want to take a look at some of the guys at the end of their bench. If you're in a 10-team league, it's probably not worth picking up any of these guys -- except for maybe Randall Cobb. Here are a mix of one-week matchup plays along with some guys that have a higher upside as stash candidates. 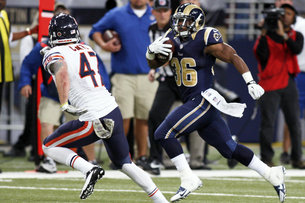 Before we get started on the stats, Burleson had the best TD celebration of the season with his pizza delivery. He broke his arm back on September 24 after he tried to save some pizzas from falling off his passenger seat and crashing his car. Bang it here for the GIF. Pizza parties aside, Nasty Nate had a nice little game in the slot for the Detroit Lions on Sunday with seven catches for 70 yards and that aforementioned score. Burleson also played 72 of the 80 snaps to serve as just another indication of how much the Lions are going to use him. He operates in the slot and with how often the Lions run three-wide sets, Burleson should get the snaps and subsequent targets.

Before he went down, he had 6.7 catches for 80 yards per game in those three games preceding the injury. It'll be a short week for Burleson and the Lions, but the Green Bay Packers at home serve as a favorable matchup for him.  He should be viewed as a WR3 this week and is a lot safer than Cord (below).

More often than not, it takes a rookie receiver a while to get his feet wet. It's not every year a player like Julio Jones or A.J. Green comes along. It took 12 weeks, but Cord finally had a bit of a breakout game. Against the Green Bay Packers, Patterson was targeted 11 times and caught eight of them for 54 yards. The yardage certainly isn't too impressive, but this is the second week in a row he was targeted at least nine times.

He'll get the Chicago Bears this week. In case you missed Sunday, the Bears were absolutely destroyed by the St. Louis Rams and that's been a bit of a habit for them lately. In fact, they have the fourth-worst points allowed in the NFL for the season and that number is on a downward trend. Minnesota is last, so there could be a lot of points scored on Sunday.

If you need some help this week for whatever reason, Cord could be in for a big day and has a chance to add a TD in the return game, as well.

It's probably about time to start stashing the Green Bay Packers receiver. He did say he's not sure if he's going to be able to return to the lineup, but there is a chance he can return as soon as he's eligible in Week 15.

He had a broken bone in his leg, and those injuries can be a little more unpredictable than most. Sometimes players can come back early, and with the production Cobb puts up it makes sense to take a chance on him.

Week 15 would be the semifinals in fantasy leagues, so if you're sitting there with just two or three losses, it's not a bad idea to stash him in exchange for a guy you only used as a bye week fill-in. Bye weeks are over, you guys.

Denarius Moore missed Sunday's game with a shoulder injury and he could miss this coming week as well. Streater stepped in as the top option and wasn't too shabby with 93 yards on five catches. His nine targets were more than anyone with Andre Holmes as the only other receiver to have more than two targets.

The Raiders have a short week and will go up against the Cowboys on Thanksgiving. Dallas is really banged up with linebacker Sean Lee definitely out and Morris Claiborne not at 100 percent. The inept Giants had some success moving the ball against the Cowboys and the Saints dropped a ridiculous 40 first downs and 625 yards from scrimmage on them.

Streater should get another chance and will likely get 10 targets this time out. He's a low-end WR3 in PPR leagues with room for upside.

The Carolina Panthers claimed another player that was heating up, holding Miami Dolphins receiver Rishard Matthews to just two yards on three receptions and seven targets. The seven targets are the story, and he would have likely turned that into some form of production against an average defense. What's more, Panthers cornerback Captain Munnerlyn was getting carved up by Mike Wallace all game, so Ryan Tannehill went that way a little more often usual.

Compton, Long Beach, Underwood! Dr. Dre lyrics aside, Tiquan turned in a nice game in the dome against the Detroit Lions. He had just five targets and turned it into 108 yards, three receptions and two scores. Of course, his 85-yard TD catch had a lot to do with that massive output.

Underwood has been more of a deep threat for the Bucs. He has a 21.1 yards-per-catch average and has only caught 13 of his 22 targets on the season. The Bucs have been looking for a receiver to replace Mike Williams and they may have finally found one. Since Williams went down, Underwood has at least four targets in three of the those five games.

He's all boom-or-bust, but the Bucs are going to need some boom next week against the Panthers. He's not going to be worth starting at all this week, but Week 14 in Buffalo could be a sneaky play if he surprises and has a good game in Week 13.

He did something he hasn't done since September: caught a pass. Austin was targeted three times against the Giants on Sunday, catching one of those for 17 yards in the win. He has fallen way off the progression chart for Tony Romo, but at least he's back. Rookie Terrance Williams seems to be well ahead of him, but Austin does have some value as a handcuff-type guy for Dez Bryant and his back issues. He has nowhere to go but up and he did catch 10 balls in the opener, so he's at least shown he's still capable of putting up numbers.

He's been out since Sept. 3 but returned to practice on Monday. Woods saw eight targets in that game and he's getting some more looks in the offense. What's more, E.J. Manuel should be able to keep the Bills moving down the field.

Woods isn't going to be anything more than a deep threat, but he has a great matchup against a reeling Falcons secondary. They've been abused by the Tampa Bay Buccaneers, so the Bills could hang a 30 spot on them. Woods won't be worth starting in PPR leagues and is only worth a look in 16-team leagues or deeper.