We have your wide receiver rankings for Week 15. Make sure you check out our rankings before submitting your lineups during playoff week.

We saw more touchdowns scored in Week 14 than in any week in the history of the NFL. Ninety touchdowns were scored, even before the Monday Night game between the Dallas Cowboys and the Chicago Bears. Ninety!! That comes out to six touchdowns per game. Anyway, which wide receivers performed well in Week 14? When Lavon Brazil and Da'Rick Rogers each score two touchdowns for the Colts, you know it was a crazy week in the NFL. 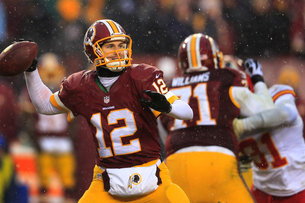 At the beginning of the year, I thought Cowboys WR Dez Bryant could challenge Detroit Lions WR Calvin Johnson as the NFL's #1 wide receiver. So much for that. But, who would have thought that a Cleveland Browns wide receiver would be in the conversation? One that missed the first three weeks of the season serving a suspension? Josh Gordon has been on fire of late, and he continued to dominate on Sunday against a New England secondary, catching seven of his ten targets for 151 yards, including a score on an 80 yard catch-and-run. There have been no wide receivers better than Gordon over his last three weeks, as he has caught 31 balls four 649 yards and four touchdowns. The Brown has 71 catches for 1.400 yards and 8 touchdowns in 11 games this season.

Oakland Raiders WR Rod Streater had his best game of the season, catching seven of his ten targets for 130 yards and a touchdown from QB Matt McGloin. Streater needs to average about 70 yards per game over the last three weeks to go over 1,000 yards for the first time in his career.

New Orleans Saints WR Marques Colston came back to life on Sunday Night football, catching nine of thirteen targets for 125 yards and two touchdowns. He had a third touchdown nullified, as his knee hit the ground about a foot or two before the goal line. With so many other options in the Saints passing game, Colston's numbers have dropped this season. After four consecutive 1,000-yard seasons, he has just 56 receptions for 721 yards and four touchdowns this season.

Below is s a list of receivers with the most targets over the last three weeks, courtesy of KFFL.

Three receivers who have seen more targets over the last three weeks are: Julian Edelman, who was hot earlier in the season and cooled off until late; Brian Hartline, who would probably see more targets if QB Ryan Tannehill could get more protection; and Marques Colston who had a big game on Sunday Night Football vs. the Carolina Panthers.

The table below ranks the defenses that have allowed the most fantasy points to opponents wide receivers this season.