The fantasy playoffs start in many leagues this week. Which waiver wire running backs could help lead your team to fantasy glory?

It's the beginning of the fantasy playoffs in most leagues this week. If your team made it this far, for the most part you shouldn't shuffle your lineup too much -- the bye weeks are over and your stud players are must-starts every week from here on out. But if you're still dealing with injuries or have depth issues, here are five running backs who could help you out as you begin your quest for glory. 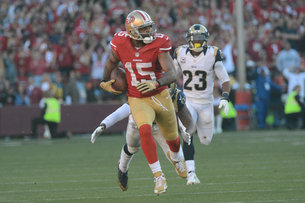 It's sort of baffling that the Jets aren't leaning on their running game more with Geno Smith getting worse by the week, but Ivory is one of the few bright spots in New York's offense. He was the only player who could do anything against the Dolphins, recording 73 yards on 13 touches, and has the talent to be an RB2. Ivory has a plus matchup with the Raiders next week.

Knowshon Moreno is still the unquestioned No. 1 back in Denver, but Ball has cemented his handcuff spot. He went off on the Chiefs in Week 13, piling up 121 yards on 14 touches. Granted, Ball was playing a depleted Chiefs defense, who clearly missed Justin Houston, but he's shown that he can step in and produce if Moreno goes down. Ball has a tough matchup with the Titans next week, but could see some more snaps once the Broncos wrap up home-field advantage. He's a fine sleeper down the stretch, especially if your league plays in Week 17.

Green-Ellis will never look impressive on the field and still shares carries with Giovani Bernard, but he gets enough volume to keep on rosters, particularly if the Bengals have a lead and want to milk the clock. He'll be on the flex radar against the Colts and Steelers over the next two weeks as the Bengals try to clinch the AFC North.

Brown is the new No. 1 back after Trent Richardson's demotion, and he responded with a quality game against the Titans. Brown got 64 yards on 16 touches and was a key player in Indy's game-winning touchdown drive. Things will be tougher against the Bengals next week, but Brown has performed well enough to warrant flex consideration.

Carolina's backfield is still a mess, but Tolbert has been performing better than the ineffective Jonathan Stewart and injured DeAngelo Williams. Tolbert had one of his best games of the season against the Bucs, getting 89 yards on 12 touches, but he hasn't scored a touchdown since Week 9. Tolbert's goal-line carries still makes him worth a roster spot in deeper leagues.