Minnesota Vikings running back Adrian Peterson is questionable for Sunday against the Baltimore Ravens. We break down the fantasy implications.

Minnesota Vikings running back Adrian Peterson is officially listed as questionable for Sunday's game against the Baltimore Ravens. Peterson is dealing with a groin injury that forced him to miss practice on Wednesday and Thursday. He returned to practice on Friday, albeit in a limited fashion. 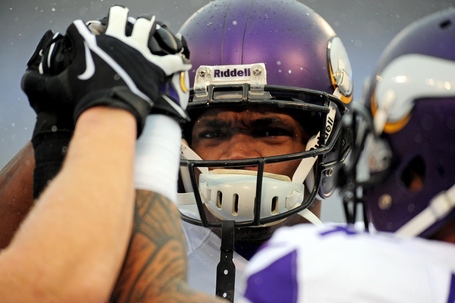 Adrian Peterson had to be carried off the field Sunday against the Ravens with an apparent foot injury.

Peterson has been questionable multiple times this season, but he has not yet missed a game. Most believe he won't miss Sunday's game against Baltimore, either. The Vikings are out of the NFC North race and out of the running for a wild card spot, but Peterson will likely want to play to help his team win, regardless.

The veteran running back has carried the ball 261 times for 1,208 yards and 10 touchdowns. It's been a solid season, but down from last year. That's to be expected given that he came close to breaking the single-season record for rushing yardage.

Fantasy Impact: Peterson will likely play against the Ravens. Baltimore boasts the No. 6 rush defense in the NFL, allowing 100.1 rushing yards per game. Still, Peterson is the top running back in the NFL and you can't sit him against any defense in the league. Start him with confidence unless you hear otherwise early on Sunday.