Tennessee Titans fantasy football draft preview: Which receiver is going to catch on this year?

The Titans gave up the most points in the NFL last season. Can their offense start to play like a team that's facing their own defense, or are the Titans doomed to "Chris Johnson" the joint up?

Share All sharing options for: Tennessee Titans fantasy football draft preview: Which receiver is going to catch on this year?

When it comes to fantasy football, the Tennessee Titans were probably very helpful to you last season. That is to say that their defense, by allowing the most points in the NFL, was very helpful to some of your players.

The Titans gave up 29.4 points per game, allowing over 30 eight times and over 50 twice. Though they seemed to improve as the year went on, Tennessee then let the Packers drop a season-high 55 on them in Week 16. So the Titans defense is not something you want to target this year ... unless one of your players is facing them. It doesn't help that Tennessee also decided to spend its first-round pick on a guard.

Is Chance Warmack enough to also turn around an offense that finished 23rd in scoring?

The Titans scored fewer than 20 points in nine of their games last year and still suffer through an identity crisis of their top offensive players. Is Jake Locker a franchise quarterback? Which Chris Johnson will show up on any given Sunday? Can Kenny Britt play like a No. 1 receiver on a consistent basis?

It seems like Tennessee has talented players. When is the team going to start acting like it?

A shoulder injury forced Locker to miss five games last season, and when he returned, he wasn't the same player. He threw four touchdowns in three games before getting hurt, and six touchdowns in seven games after he came back, with nine interceptions. 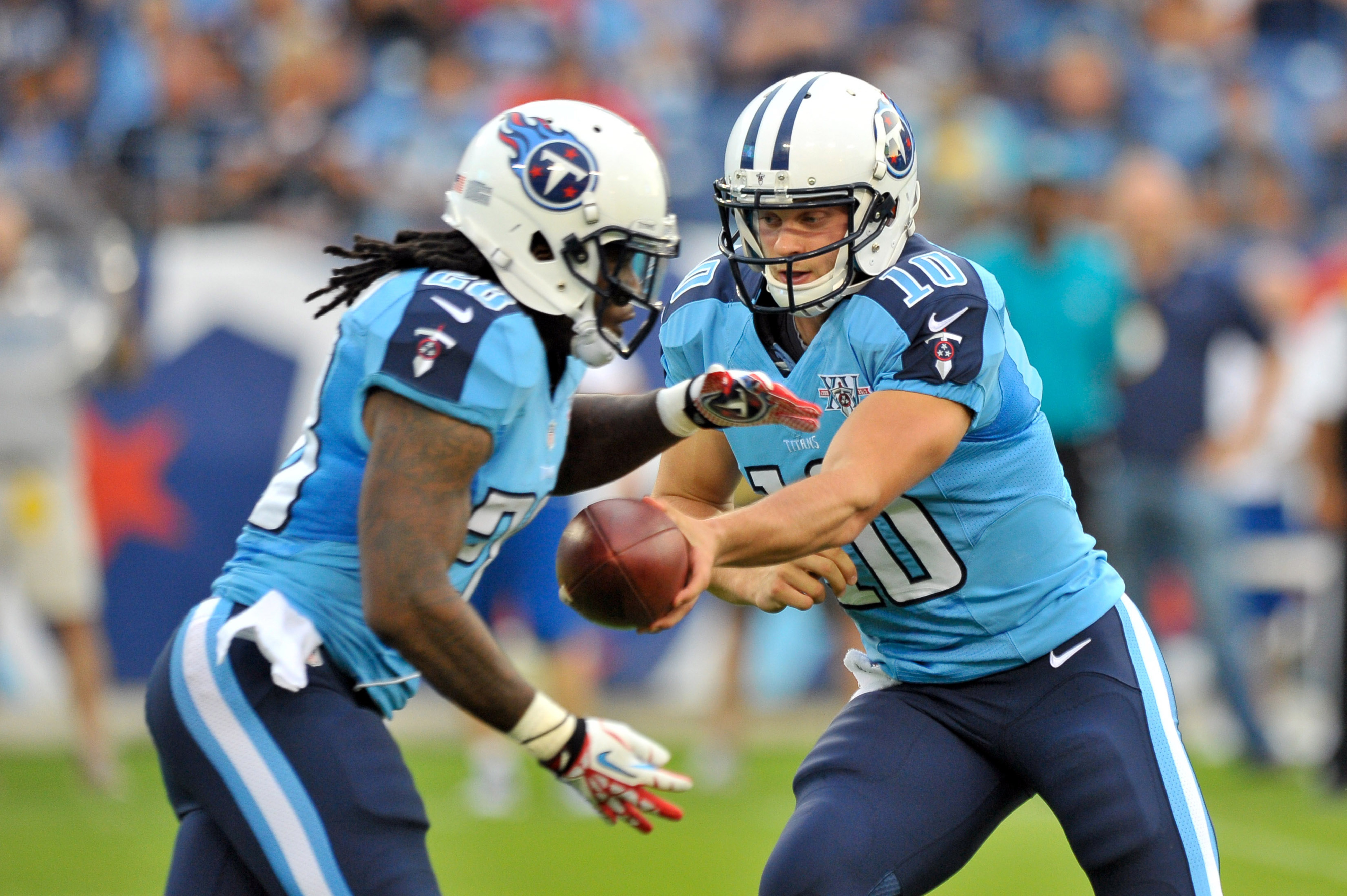 None of his receivers had very good seasons either, which is likely a symbiotic result of a QB with a bum limb and their own shortcomings. But Locker was one of the worst QBs in the league on third downs and in the red zone, which led to the firing of offensive coordinator Chris Palmer during the season. What should make us confident that it will be better this year?

This is the first year that Locker gets to go through OTAs and training camp as the No. 1 quarterback throughout and also stay healthy (so far). Locker is competitive and determined to turn into the star that the Titans expected when they drafted him, a player once thought to be a future number one overall pick, but there are still several issues of concern. The paramount issue being that his style of play hurts him. Literally.

When Locker attempts an NFL pass, there's going to be two hits: a defensive end hitting him, and the ball hitting the ground. As one of the least-accurate QBs during his tenure at Washington -- at least in terms of completion percentage -- Locker's athleticism is one thing that sets him apart from other quarterbacks. That athleticism is useless, however, unless the team blocks better. That's why they spent huge capital this year at the guard position to improve in that area, but it's also why this team is expected to run more under new offensive coordinator Dowell Loggains.

In some ways, Fitzpatrick was a better QB than Locker last year...  And he lost his job in Buffalo without question.

Still, if the Titans struggle out of the gate and Locker doesn't do well, or if he gets hurt and misses work and it won't hurt to miss work, AFLAC Fitzpatrick will be asked to step in. He's capable of that. Might even have a few big games. But don't expect much more than that after he has already been in the league for so long and had several opportunities without any prolonged success.

Johnson will tell you that this year is going to be different, but he's consistently said that since he became a liability in 2011. Did he rebound in 2012 by rushing for 1,243 yards? Not exactly. Johnson still ran for only 45 yards in the first three games total, and 7.5-percent of his total rushing yards came on a single 94-yard run.

Johnson is a home run hitter, but the problem with home run hitters is that they often strike out. Football Outsiders didn't even rate Johnson as one of the best 32 running backs in the NFL. Sometimes you're going to start Johnson and get 150 yards, sometimes you're going to get 20. That's what FO's "Success Rate" measures, and a 41-percent success rate from Johnson means that he has some long runs, but gets stuffed at the line quite often.

That makes it really difficult to win fantasy football games, and for that reason, I will continue to stay away from one of the faster players in the league unless I somehow manage to get him as my "RB3/WR3" spot. He's fast -- so fast that he'll run you right out of contention at times.

Greene was rated higher by FO than Johnson was, and like Fitzpatrick, his former team had little issue with letting him go. What could be good news for Locker, Johnson, and Greene is that the team took Warmack and signed guard Andy Levitre to upgrade perhaps one of the worst offensive lines in football. But Levitre is rated as perhaps the best pass-blocking guard in the league, and maybe just an average run-blocker.

Is a pair of guards enough to believe that the Titans offense is all of a sudden good? It's not enough for me. However, don't be afraid to spot start against the Colts, maybe a worse defense than even Tennessee.

2012 Prediction: 100 carries for 450 yards and 3 touchdowns. Perhaps more if Johnson struggles, which is prosbable. (Possible AND probable.)

The other options in the backfield won't do anything for you. Sort of like Johnson half of the time.

Britt used to be one of my favorites in the league from whom to expect a breakout season, perhaps turning into one of the top receivers in the NFL. Ah, reminiscing on old times.

In reality, Britt was one of the least valuable receivers in the NFL last season. He barely caught half of his targets, he fumbled twice, and he was surpassed by two other receivers on the team in yardage last year, both of whom are still with Tennessee and are joined by one of the top receivers in the draft.  At this point, Britt is a late-round flier and nothing more.

Even if he does good, he's always a risk to do something bad.

Except for one season, 2011, when he broke out for over 1,000 yards, Washington has been one of the most consistent receivers in the NFL; Consistent for 600 yards and like five touchdowns. Why not more of the same?

Wright had the highest catch rate and the most targets on the team, but is he being usurped by Hunter? Even with 104 targets, he only managed 626 yards, which appears to make him more "Doug Baldwin" than "Sidney Rice." Wright is a safety net for Locker but someone's going to need to be grabbing the highlight reel bombs for big touchdowns.

That used to be Nate Washington, but it seems like his time is winding down. There's a new top dog in town...

A hamstring injury has sidelined Hunter for most of his first offseason as an NFL player. That's not good news for a rookie, but it's not crippling news either (that's a pun!).

But how does a 6'4 receiver that has All-Americanesque speed fall out of the first round? Hunter tore his ACL as a sophomore and when he returned the next year, he showed inconsistent hands. He doesn't have a lot of experience and the Titans would like to rely on him as a number one receiver but how soon can that be expected?

Is Hunter the next Vincent Jackson or the next Kenny Britt? I don't know, but expecting too much out of him this season would be a fault.

The Titans have a lot of young receivers with a lot of promise, but none can promise you that they'll break out this year. Mariani is a Pro Bowl returner, but not a receiver; he might not make the cut. Williams has struggled thus far when opportunities have been presented to him.

Your safest bet might be Wright, the best home run would be Hunter, and Washington and Britt have been highly valuable in the past. If I ranked these four players, I would go: Wright, Hunter, Britt, Washington. I've predicted four seasons of roughly the same production, but in reality, I think two players will step ahead of the other two. The only hard part is deciding which two guys that is.

49ers fans didn't want to see Walker walk, but Titans fans shouldn't expect him to all of a sudden become Vernon Davis now that he's the number one. He's going to put up the same kind of numbers as he did in San Francisco, and he's really here for his blocking.

Stevens is the same age as Walker, but hardly anyone has ever heard of him. Though he caught 70 percent of his targets, he doesn't have the skills to gain more targets.

• Five new coaching regimes that will help your fantasy team

• Best wide receiver on all 32 teams