Green Bay Packers fantasy football draft preview: How many more breakout stars do they have this season?

The Packers rarely go unnoticed, but some new names at running back could change the dynamic of the offense. Not to mention, your fantasy team.

Share All sharing options for: Green Bay Packers fantasy football draft preview: How many more breakout stars do they have this season?

Is there a more overlooked elite team than the Green Bay Packers? Over the last four seasons, the Packers have gone 47-17 with a Super Bowl trophy, an MVP award for the quarterback, and perhaps the most dominating pass-rushing linebacker in the NFL.

Two rookie running backs fight to take over lead duties in the backfield, while the departure of Driver and Jennings possibly opens the door for a new unknown to pop off a 1,000-yard season for the Packers.

Though many people are focused on an NFC race that includes the 49ers, Seahawks, Falcons, Redskins, and darkhorse names like the Vikings, Buccaneers, Panthers, Giants and Bears, if you've forgotten the Packers, you better check again.

No, make that a discount double-check again. 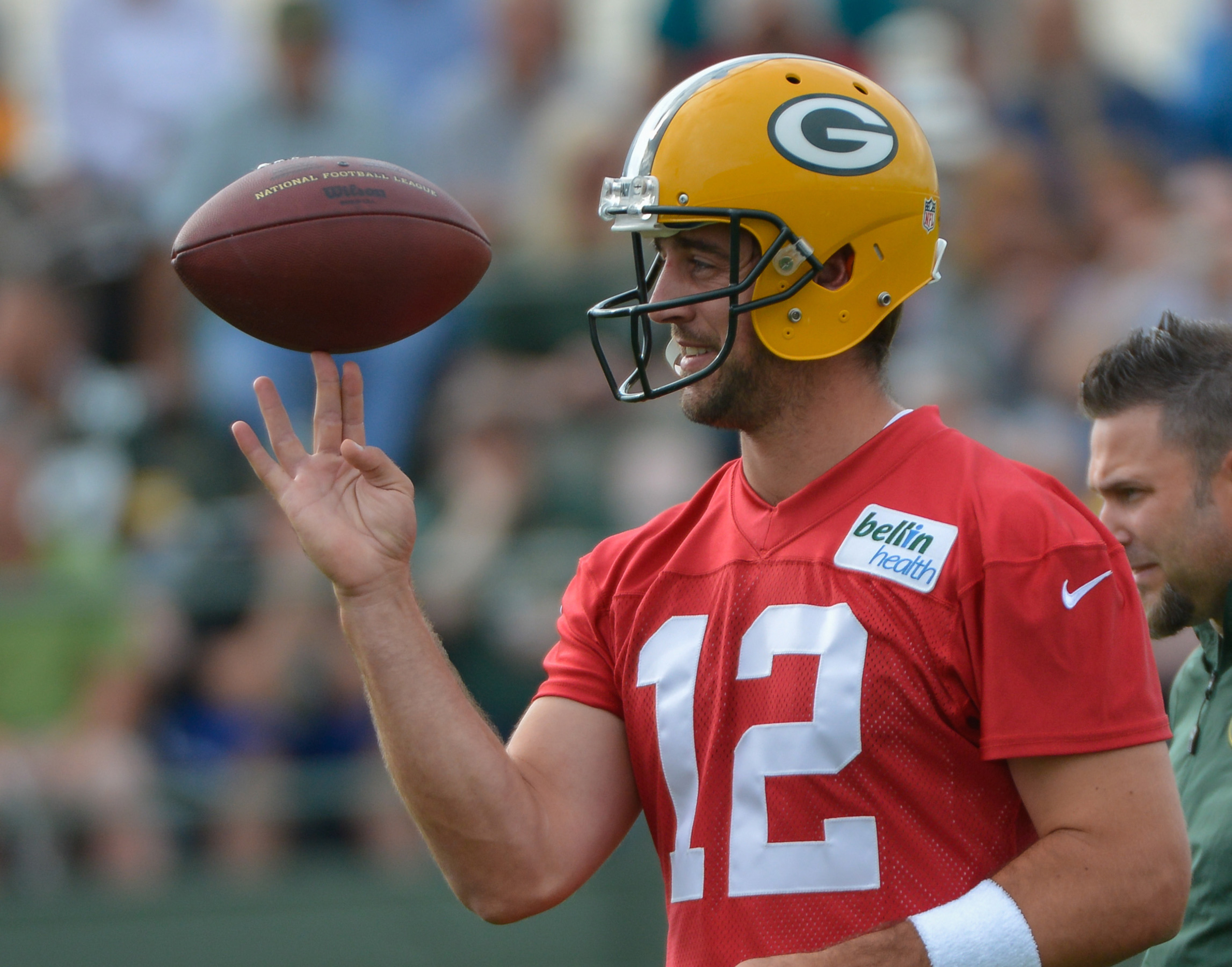 Last season Rodgers threw 11 touchdowns and three interceptions in his six divisional games, and wasn't fearful of the tough Bears defense: He threw for 293 yards, three touchdowns and no interceptions against Chicago in Week 15. Even if he did struggle against the Bears this season, he doesn't draw them for the second time until Week 17 when most fantasy seasons are over.

If a Bears legendary coach says that a Packers quarterback is the best in the world, I'll believe him.

This situation is a mess, with the Packers adding Seneca Wallace after roster cuts. Green Bay Packers better pray for Aaron Rodgers.

It seems a good bet that Lacy will be the starter and majority ball-carrier for the Packers this season. How good of news is that? Alex Green led the team with just 464 yards last year and Cedric Benson averaged 3.5 yards per carry. Ryan Grant ran for over 1,200 yards in each of Rodgers' first two seasons, but since then the team hasn't had enough talent or health in the backfield to be able to concentrate on running the ball.

Lacy is an attempt to fix that, even though has already missed some training camp already. Don't get too excited about Lacy until we see it work on the field during the game. Despite the fact that Lacy is a good bet to get the majority of work, Green Bay has a surprising amount of depth at the position all of a sudden and there should be a healthy amount of sharing going on. The Packers backfield is like a really well-behaved kindergarten class.

Meanwhile, Franklin isn't a shabby running back prospect, either. Taken in the fourth round, Franklin is a complement to Lacy rather than a guy looking to steal the starting job. Not that it couldn't happen, but Lacy and Franklin were drafted to play with each other, not against each other.

But Lacy partially slid due to injury concerns, and if he missed a bunch of time, Franklin could be the starter. That doesn't guarantee anything in Green Bay with its recent lack of a running game, but Franklin is one to watch.

This group used to include DuJuan Harris and Alex Green. Harris is out for the season and Green was released at the cutdown deadline. Starks has minimal value with the two rookies already ahead of him.

Cobb didn't exactly come out of nowhere last season. He was a second-round pick out of Kentucky in 2011, showed excellent field vision and speed as a rookie, and then took over for Greg Jennings last season. He seems like a low-risk option, especially for a player with only one big season, but catching more than 77 percent of your targets is about as good as it gets for a number one receiver.

2013 Prediction: 90 catches for 1,200 yards and 10 touchdowns, maybe some bonus yards and touches on special teams and on the ground, if necessary

But Jones absolutely came out of nowhere. For five seasons he was pretty much the exact same player, good for 40 catches and 600 yards. Last year he became a starter and really, if it wasn't for all of those touchdowns, he would have been a below-average fantasy player.

I don't like crediting a player with too much when he has a big season of scoring touchdowns. That doesn't make me nearly as comfortable as a player who has a lot of catches and yards and can turn 100 targets into 1,000 yards. Jones turned it into only 784 yards.

Case in point: Nelson had 15 touchdowns in 2011 and was considered one of the biggest disappointments of 2012. He missed four games due to injury and was also MIA for a couple more because of injuries suffered early in games. Nelson had 18.6 yards per catch in 2011 and I consider him to be a more reliable option that Jones.

Any player can get hurt, but not very many can put up over 15 yards per catch and come up with several huge plays per season.

Acme Packing Company predicts that Boykin, Ross, and Myles White would be the final three receivers to make the roster. They were right on two of them. Boykin could be a deep sleeper, as the Packers have shown that they can turn no-names into legit fantasy stars year in and year out.

These are your deep sleepers -- but the Packers already have three receivers worth drafting. These are just a few names you need to keep an eye on, depending who makes the cut.

Finley has largely been a disappointment to many who thought he'd be just as good as Jimmy Graham or Rob Gronkowski. But the bit of promise he had shown in 2009 and 2010 just isn't enough to keep banking a whole lot on Finley.

He played in only five games in 2010, but he had 21 catches for 301 yards and a touchdown before being injured. He had two games over 100 yards. That shot him up draft boards despite a knee injury that had placed him on IR. Finley had a three-touchdown game in Week 3 against the Broncos in 2011, but he never topped 90 yards that year.

There's always a chance that he does break out for a major season, but if you treat Jermichael Finley like the 12th or 13th best tight end on the board, you probably won't be disappointed. If you treat him like more than that, you probably will be.

Somebody will back up Finley. And if Finley isn't a great tight end option, what are you supposed to think of his backups?

From an IDP perspective, Clay Matthews is still one of the top options. Though he had a bit of a down season last year in terms of fantasy points (no interceptions, one forced fumble, no fumble recoveries, no touchdowns), he still had 13 sacks, and he's still probably more likely to score a touchdown than not during the year. But is anyone else worth it? No other Packer had more than 3.5 sacks.

Corner Casey Hayward had six interceptions as a rookie, but picks aren't something you can count on to stay consistent.

As a unit, the defense has remained pretty good during the four years under Dom Capers (except in 2011, when it gave up the most yards in the league) and in 2012, it was 11th in scoring defense, 18th in turnovers forced and eighth in interceptions.

Green Bay spent its first-round pick this year on defensive end Datone Jones out of UCLA, and he's expected to be fine after suffering an ankle injury in the preseason opener.

On the whole, the Packers should continue to be about an average team defense in fantasy, especially since they play in the brutal NFC, with a schedule against the best conference in the AFC -- the AFC North. A big season from Matthews, a few lucky bounces and the Packers do have enough talent to make it interesting.

It's like I've been saying: Don't overlook the Packers.