The Lions finished 4-12 last season, but were they underrated? What once seemed like a lost cause might turn into the league's most explosive offense. Here are the players you'll need to pay attention to.

The Lions might have finished 4-12 last season, but perhaps Jim Schwartz kept his job based on more than just blind faith that it was a fluke year. It might have actually been one of the "better" 4-12 seasons in recent memory.

Consider the fact that the Lions lost two games in overtime. Consider that they lost by eight at San Francisco, by seven to the Vikings, by six at Chicago, by 10 at Minnesota, by four to the Packers, by three to the Texans, by two to the Colts, by seven at Green Bay, by 13 to Atlanta, and by two to the Bears. That's an average loss by 6.2 points to 10 teams with winning records.

The Lions had the sixth toughest schedule in the NFL by DVOA, and the only time they really got blown out was a 38-10 loss to the Cardinals in Week 15. I guess the Cards just weren't "good enough" for the Lions to bother keeping up this time.

So maybe that's why Schwartz kept his job. Maybe that's why Matthew Stafford signed a five-year, $76.5 million extension. And maybe that's why we should be paying a lot more attention to a team that may have been on the edge of a respectable 8-8 season, but instead wound up with a top five pick.

Here are the guys you may or may not be picking in your fantasy draft this year. 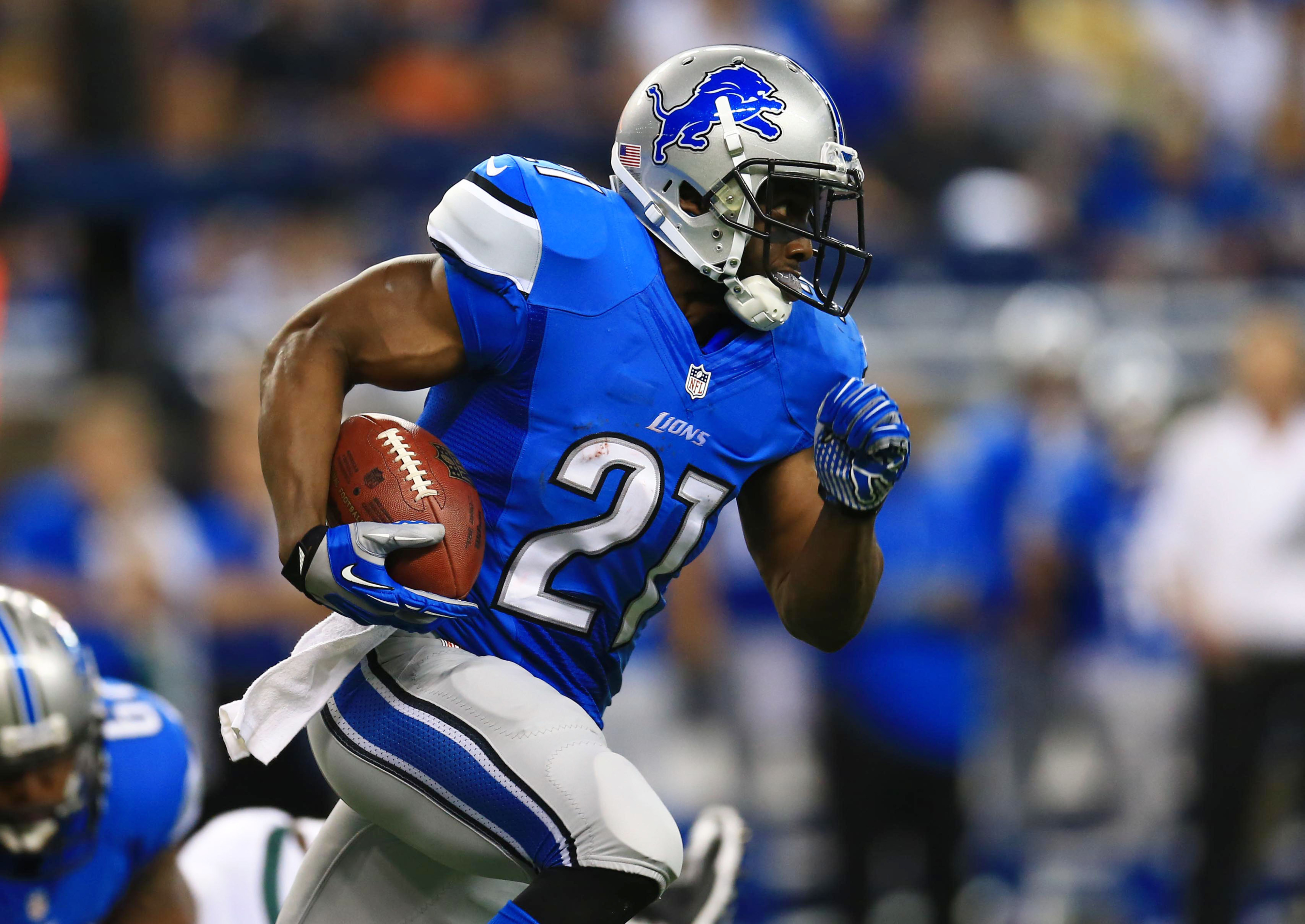 Year-over-year it might seem like Stafford turned into a pumpkin, but the fact of the matter is that his only major stat differences from 2011 to 2012 were touchdown percentage and yards per attempt. An excellent 6.2 percent of his pass attempts in 2011 went for scores, but that plummeted to 2.8 percent last season. His yards per attempt dropped from 7.6 to 6.8. But otherwise, his numbers were mostly the same.

Stafford threw for almost the same number of total yards, for a slightly lower completion percentage, and actually a lower interception rate. Don't forget that Ryan Broyles couldn't stay healthy, that Nate Burleson went on IR early, and that Titus Young went off the deep end.

Assuming healthy seasons -- always a bad idea, but still -- then you should do the same thing with Stafford that the Lions did:

Put your faith in him. He's mostly still the same QB that threw 41 touchdowns in 2011.

There's still some people out there that probably think that Hill should be starting. Those people aren't what I would call "smart." To be fair, Hill had 13.2 yards per attempt last year! (On 13 attempts. In that OT game where the Titans pulled their defense).

Meanwhile, Moore wants to remind you that "Hey, look at how good that Russell Wilson is doing!" but instead he just reminds us that college football sure is a heck of a lot different than the pros. There's a "pro tip" for you.

Is it possible that we are now overlooking Reggie Bush? How did that happen?

Over the last two years, Bush has run for 2,072 yards and 12 touchdowns, with 78 catches for 588 yards and three more touchdowns. In fact, while most of his career has been seen as a disappointment, Bush has averaged 4.8 yards per carry on his last 549 carries.

On that average, if Bush had 250 carries in a season he would finish with 1,200 yards. The Lions didn't sign him to a four-year deal just to take on 10 touches per game. He's going to play and in this offense he could become what Jahvid Best looked like he would become once upon a time.

This backup situation has seen Joique Bell emerged as a popular handcuff of Reggie Bush. He remains the primary guy you want as Mikel Leshoure seems to be falling away to oblivion. Given that Bush can get banged up from time to time, Bell is a solid pick-up.

Even if you're not sure that you can rely on anyone else on the team, there's always Calvin. Megatron has caught 218 passes for 3,645 yards and 21 touchdowns over the last two seasons, not even accounting for his 12-catch, 211-yard, two-touchdown performance in the playoffs against the Saints.

When you think of Johnson, it's natural to think of the other current "elite" wide receivers in the NFL, and then it's hard not to think of the Larry Fitzgerald disaster last season. Except that Stafford is not the QB that the Cardinals QBs are/were. Not even Shaun Hill is on that level.

At his least-productive, Johnson is still an 1,100-yard, 10-touchdown player. At his most productive, he's breaking NFL records. If you don't like taking risks in the first round, go with Calvin.

The rest of the receiving corps, you can't be too sure about.

Though Stafford targets Burleson quite a bit, he just can't turn it into enough production on a regular basis. He's older, coming off a serious injury, and was never a huge talent to begin with. He's one of the most reliable receivers for the Lions, he's important to the dynamic of the team, but he's only a spot start in fantasy.

And then there's Broyles, a player that slipped in the draft mostly because of injury concerns. And then he got injured again last year. And I'm still concerned.

Broyles caught almost 70 percent of his targets and he turned it into nearly 10 yards per target. If healthy, Broyles could be one of the big breakouts of 2013. But I can't stress that "IF" enough.

Sean Yuille of Pride of Detroit had this to say about Broyles:

Especially in PPR leagues, Ryan Broyles should probably be valued a bit higher than he is currently. The Lions expect Broyles to be a big-time contributor on offense, and aside from getting a day off today, he hasn't missed a single practice in training camp despite coming back from a torn ACL. I'd expect him to become Matthew Stafford's favorite target not named Calvin Johnson.

Edwards is just 5'9, 175 pounds and went undrafted in 2012 despite the fact that he was the Conference USA Offensive Player of the Year in 2011. He had 4,507 career yards at Houston (including 318 yards in a game against Rice) but just doesn't possess the ideal "tangibles" like height and weight. But Yuille says that this is a guy that is emerging as the fourth receiver for Detroit and could be a deep sleeper.

Durham has size and speed and played opposite of A.J. Green at Georgia, but didn't develop the way the Seahawks hoped he would after drafting him in the fourth round in 2011. The Lions picked him up in the middle of the year and he had 54 yards in his Lions debut against the Packers, and caught a touchdown in the season finale against the Bears.

Thomas has had more NFL success, gaining 820 yards with the Jaguars in 2010, but has fallen off the map considerably since then. Could any of these receivers step out of the shadows and produce this year?

Perhaps the least valuable tight end in the NFL last season, Pettigrew didn't catch enough of his targets, and he had a lot of targets for a guy that didn't do much with them. Only 5.55 yards per target last season and just three touchdowns.

He's not exactly young. He's not really producing yards per catch at the level of the "new hybrid" tight ends you hear so much about. He might not be any better than his backup. In this offense, I'll give him a lot of yards and targets again since there might not be a ton of options.

Scheffler ranked a bit higher in advanced stats, but didn't manage to catch half of his targets. The Lions also drafted Michael Williams out of Alabama in the seventh round. With these two ahead of him, he might actually have a shot.

The Lions finished with the worst defense in the NFL in 2009, but has opted to stick with defensive coordinator Gunther Cunningham ever since and well, umm, hmmmmm....

So Detroit drafted Ezekiel Ansah early in the draft and then cornerback Darius Slay in the second round and defensive end Devin Taylor in the fourth. It signed Jason Jones and Glover Quin, and it still has players like Ndamukong Suh and Nick Fairley and Stephen Tulloch and Louis Delmas.

But unless Ansah (or another player) become a disruptive, 15-sack threat on the defense, it's hard to envision that this is the kind of defense you can count on in fantasy or in real life. Someone besides Suh needs to be a star, an elite talent, a one-of-a-kind, and then things can start to happen. But in the NFC, they just don't appear to be there yet.

Though, as we saw last year, they could possibly be better than they look.