Minnesota Vikings fantasy football draft preview: Is anyone besides Adrian Peterson worth drafting?

The focus on Minnesota is once again going to be Adrian Peterson, but the key to the entire offense is still going to go through the quarterback. Can Christian Ponder finally find a receiver over yonder?

Share All sharing options for: Minnesota Vikings fantasy football draft preview: Is anyone besides Adrian Peterson worth drafting?

The Vikings are coming off of a surprise playoff berth, a historic individual season and adding three first-round draft picks, but are they going to be better in 2013 than they were in 2012? You'll have to ask Christian Ponder. Because if Ponder doesn't improve, as Metallica says, nothing else matters.

An interesting choice for Minnesota with the 12th overall pick in 2011, Ponder started 10 games as a rookie with poor results. He wasn't unforgiven however, and during his "sophomore" season he looked better on the surface -- increasing completion percentage from 54.3 to 62.1, throwing five more touchdown passes and one fewer interception -- but the fact of the matter is that he still wasn't all that good. Ponder will put you to sleep faster than the Sandman and you'll be praying for creeping death.

Ponder started 16 games last year but fell short of 3,000 yards passing. He had more attempts, but his yards per attempt went down from 6.4 as a rookie to 6.1 in 2012. And though little was expected of backup Joe Webb when the Vikings met the Packers in the first round of the playoffs, it didn't seem like anyone actually missed Ponder until the second half of the game started. He's like the movie on IMDB.com that draws an average score of 5 out of 10 stars:

Not good enough, or bad enough, to be worth watching.

Can he change that for the better in 2013? Is Adrian Peterson the only "one"? Or will fans seek and destroy the third-year pro out of Florida State? Here is for whom the bell tolls: 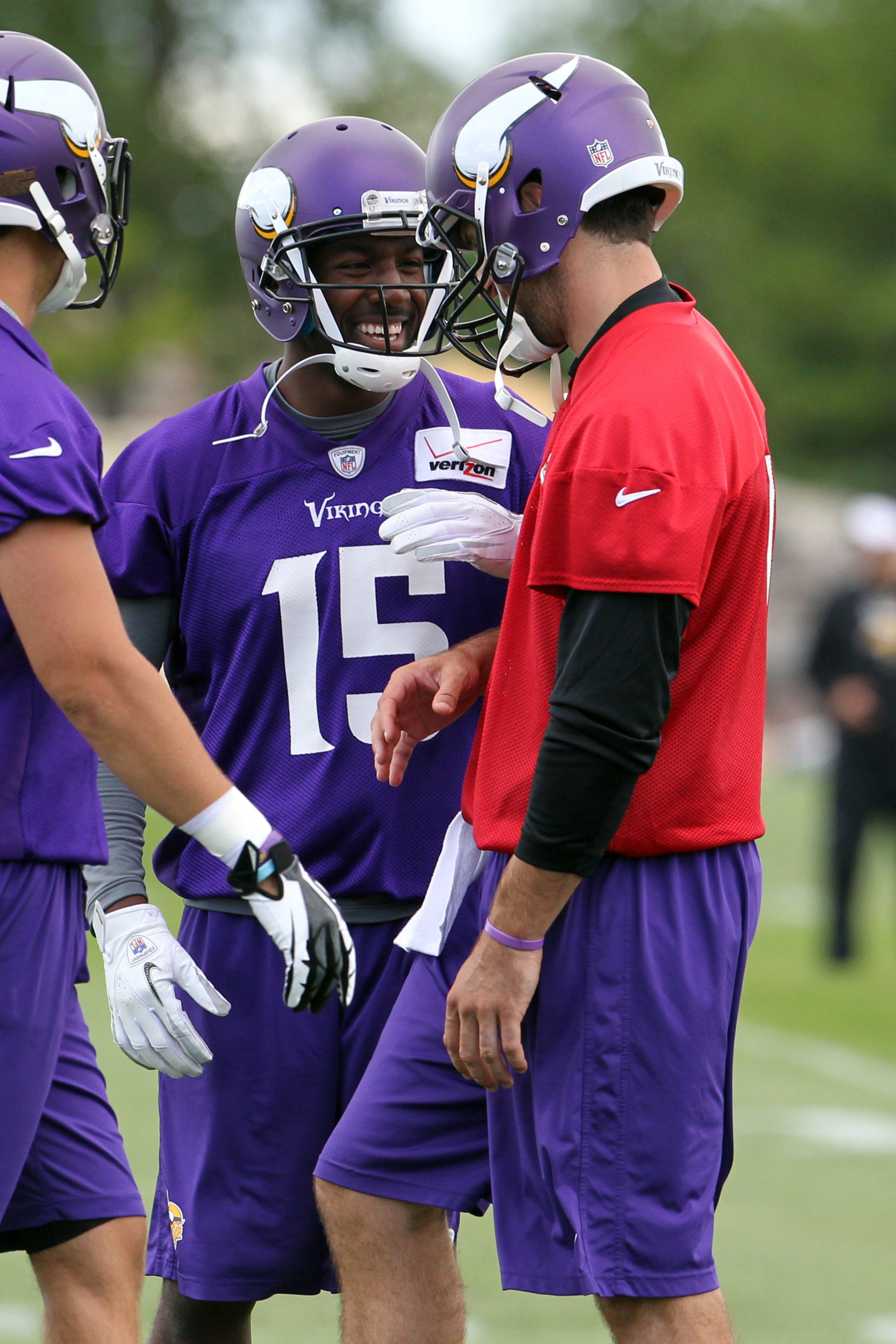 Ponder actually started the year with some decent numbers for fantasy owners. In the first three games of 2012, he was 68-of-97, good for just over a 70 percent completion percentage, 713 yards, four touchdown passes, one rushing touchdown and zero interceptions. Of course, since you know how he finished, that obviously means he was only going to get worse.

In the next 13 games, Ponder had 14 touchdowns, 12 interceptions, completed 60.1 percent of his passes, and threw for only 170 yards passing per game. Beyond reason, Ponder had three games last year when he finished with fewer than 100 yards passing. Against a terrible pass defense like the Redskins, Colts or Lions, Ponder was OK, but against anything that resembles "decent defense" he falls apart.

Or he doesn't even fall apart. He deconstructs like slow, sweet molasses.

There could be several good opportunities for Ponder this year, like against the Lions, the Giants and the Redskins, but otherwise you will want to steer clear from him as anything other than your backup. (I almost incorrectly used "you're backup" but in reality, it's almost like me telling Ponder, "No, you're backup!") The only thing safe about Ponder's job at the moment is his own backup ...

Cassel is a former seventh-round pick who never started a game in college, and he's entering his ninth NFL season. There's actually nothing other than absolute blessings all around his career.

Just don't expect that he's going to duplicate what he did last year. That would be something so phenomenal, that maybe only Adrian Peterson could do it. Oh great, now I'm confused again.

If Peterson does miss any time this year, I don't know how much stock you can put into Gerhart. He wasn't all that effective last season, but when he replaced Peterson at the end of 2011, he was pretty good. Gerhart ran for 369 yards in the final five games that year, with three receiving touchdowns.

If you draft Peterson early, you'll need to take Gerhart at some point.

I don't know. If the Vikings have to find out how good Asiata is, that only means that they are in deep, deep trouble.

The Vikings lost a Percy Harvin, but they gained a Greg and a Cordarrelle. Is that a good thing?

Jennings doesn't turn 30 until September, and that age milestone is nothing for receivers like what it is for running backs. Honestly, Jennings could have a whole 'nother career after 30. From 2007 to 2011, Jennings averaged 74.9 yards per game and 1,108 yards per season with nine touchdowns per year, and he was pretty consistent with those numbers.

The biggest difference, however, won't be that he's coming off of an injury-plagued year; it will be that he's going from Aaron Rodgers to Ponder. That's like going from eating a delicious banana split to that time you asked your mom if you could taste the chocolate and she said "No!" but you did it anyway and it was totally Baker's Chocolate without any sugar content.

Jennings may have a rebound in him, but can Ponder get the ball to within five yards of his general vicinity? I'm optimistic here.

It was an interesting draft for the wide receiver class -- a lot of players that you think might be good, but all of whom have some traits that scare you away from putting them in that "elite prospect" class. Even Tavon Austin frightened some fans away due to his small stature.

For Patterson, he has great size and great speed, with some of the most thrilling open-field plays in college on special teams, but will that translate when he's a rookie with an inaccurate quarterback? Nothing more than a flyer for Patterson -- but with Ponder it might be more like "Flyer's Up!"

He had a great preseason debut and he's got great athleticism, but from a real-world fantasy-production standpoint, he's on the low end of a WR3 in 12-team leagues to start out. Could be a lot more, I admit.

In only seven games, Wright had a pretty big impact on Minnesota. The Vikings went 5-2 with Wright, needing every last one of those wins to make the playoffs, though Wright was also inconsistent. Still, if you project those numbers over a full season, Wright would be north of 50 catches and 700 yards, and that's as a rookie.

This could be one of the major sleepers in the NFL this year, drawing some comparisons to Randall Cobb. But again ... Cobb has Aaron Rodgers.

Arif Hasan of Daily Norseman had this to say about Wright:

Jarius Wright is a serious sleeper. Has not only showed up in camp, but has a better grip on route-running and the offense in general. Even though they have Jennings and Patterson, he looks like their top slot option—they ran the 3WR package more than any other package last year, despite their reputation as being committed to the run (which, to be fair...)

Webb is likely one of the most interesting receivers in the NFL to watch this year, because hey, "I saw that guy actually play QB in a playoff game!" Let's hope we never have to see him try to make a pass when he's an inch away from being sacked ever again.

Simpson is the better of the two. He might even be worth a roster spot at some point in the year if someone in the top three options fails.

A Pro Bowl selection last year, but Rudolph also suffered from Ponderitis. A 56 percent catch rate for a tight end is ... not good. I'm always concerned about players who got most of their fantasy points on touchdowns. It's just not something that's ever proven to be repeatable.

He ended the season on a good note, winning Pro Bowl MVP honors, but will he be able to do that kind of stuff when the defense is actually trying?

I remember when Carlson was Kyle Rudolph.

If you're one of the best players in the NFL for a while, people will start to think you're getting old, but Jared Allen is only 31. Led by his 12 sacks, the Vikings had 44 total a year ago, and Allen's one of the top IDP options for a DE if you happen to play in that format.

But the Vikings finished 22nd in turnovers forced and an average 14th in scoring defense -- those things that matter most in fantasy. I don't dislike Minnesota's defense by any means -- it clearly has talent -- but you play the Packers twice, the Lions twice and the Bears offense (that looks a lot better to me) twice.

Perhaps Detroit and Chicago turn it over a bunch and perhaps the Vikings have a defense that you could consider "draftable," but there are obvious road blocks here that teams in the AFC don't have. It's pretty good, not great.

Plus, they don't get to face Ponder.