By hiring an offensive-minded coach for the first time since Mike Ditka in 1982, the Bears hope to revitalize the franchise. Will the new coaches help revitalize Jay Cutler and the offense?

Perhaps no franchise in the NFL is more distinct than the Chicago Bears. Historically, this is a defensive-minded team with a blue-collar, grind-it-out offense that uses words like "gritty" and "hard-nosed." Basically, this is a team that's descriptive clichés are from the 1930s. Well, after another season that didn't go as planned, the Bears fired the defensive-minded Lovie Smith and replaced him with Marc Trestman.

Trestman, the defensive guru? Nope. It's Trestman, the former quarterback, quarterbacks coach, offensive coordinator, and two-time CFL Grey Cup-winning head coach of the Montreal Alouettes. Welcome to the West Coast (offense), Chicago! Could this be why a supposed long-term deal for Jay Cutler was nixed after Trestman was hired? It may be that Cutler could be worth a lot more than $15 million per season if he has the breakout season we've been waiting for.

It's not like Trestman is unfamiliar with great quarterbacks.

His very first coaching job, shortly after he finished his own college career as a QB, was with the Miami Hurricanes in 1981. Their quarterback? Jim Kelly. Trestman then went on to a long NFL coaching career and oversaw the development of players such as Vinny Testaverde, Bernie Kosar, Rich Gannon, Steve Young, Scott Mitchell, Jake Plummer. He followed all of that up by helping revitalize the career of Gannon again with the Raiders as the offensive coordinator for the 2002 AFC Champions.

It's been a long NFL hiatus for Trestman, but he has returned with hopes of making the Bears as good as they can be. He'll also try to do it in a way that might not remind you much of the Bears as you remember them. Maybe that's a good thing.

At least for your fantasy team. 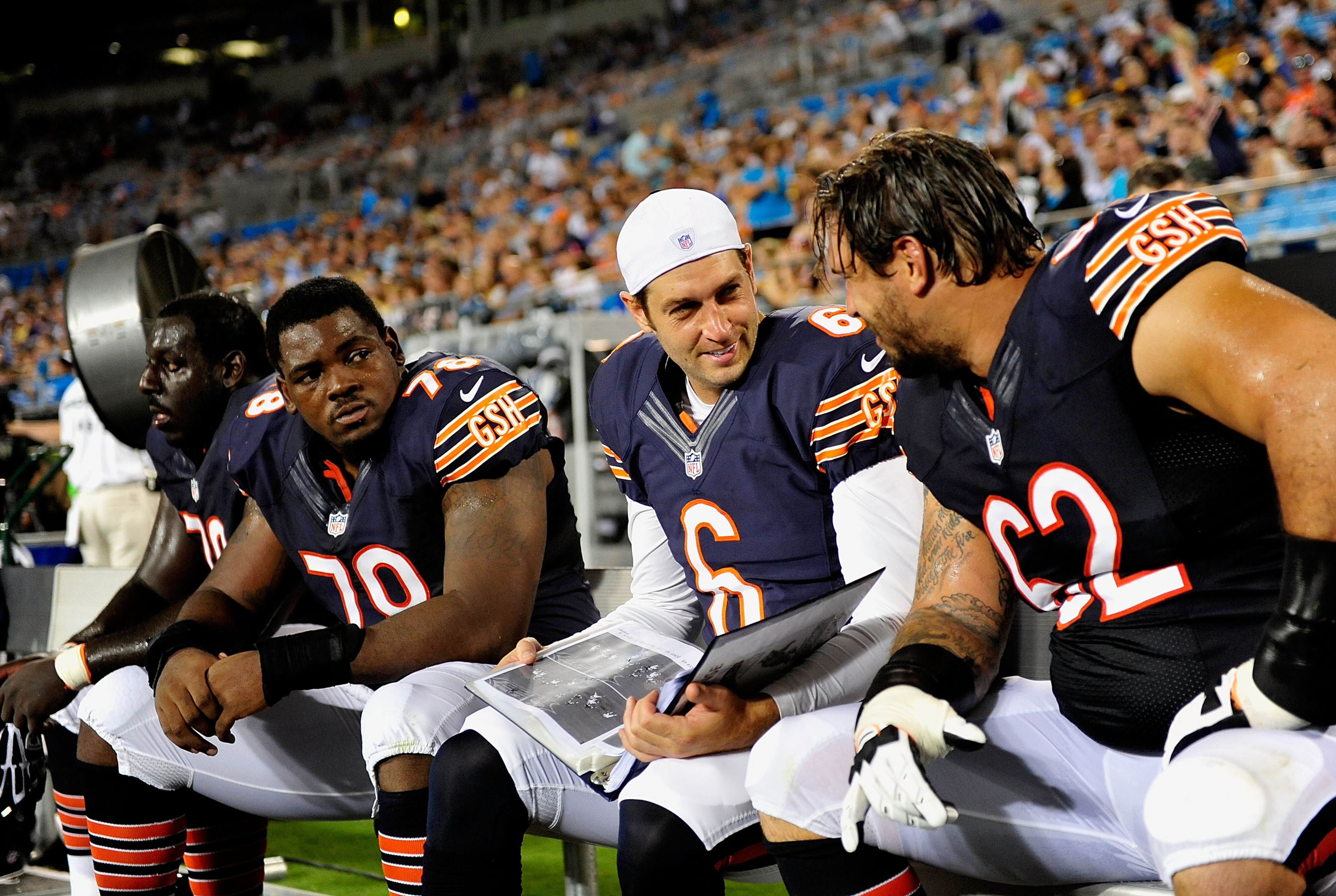 Cutler's four years in Chicago haven't been nearly as productive as his previous three years in Denver. It's not only Trestman that hopes to make his signal-caller into an elite quarterback, Cutler will also be working under new offensive coordinator Aaron Kromer. This is the same guy that helped build the Saints' dominant offensive line for Drew Brees.

That is probably why they signed left tackle Jermon Bushrod to a $35 million contract and drafted tackle/guard Kyle Long in the first round. With those two, plus fifth-round tackle Jordan Mills, the Bears plan to protect Cutler better than ever before, and if they steal some of the offensive philosophies from New Orleans you better believe that Cutler has the skills to take advantage of a better offensive system. We already know he's got at least one elite receiving weapon, but does he have any others?

With Trestman and Kromer opening up the offense, it might not matter.

Cutler is backed up currently by veteran Josh McCown. That is a fact and nothing more.

A Kromer/Trestman offense doesn't seem likely to give any one back more than 300 carries; Mark Ingram led the Saints with just 156 carries last year. Of course, Forte is more talented than Ingram or Pierre Thomas, but the Bears are more concerned with how they can score touchdowns over what's good for your fantasy team.

Forte had a career-low 44 catches last year, but that could go up again this year. He should play the most central role on offense of any of their backs, but this team is going to want to spread it around more than they have in the past.

Bush is also in a good position this year to see an uptick in production. His number of carries from last season shouldn't change much, but the Bears hope his yards per carry does.

It seems like he's been in the NFL forever, but Marshall has yet to even turn 30. As Cutler's favorite (and sometimes, only) target, he could see quite a bit of action this year in a more pass-favorable offense, but it will be just as important that the Bears complementary pieces perform better, too. Someone needs to take attention away from Marshall, and if that happens, he should be able to repeat his success from last year.

I don't imagine he'll do better than what was already a very impressive 2012.

Jeffery, a second-round pick in 2012, missed six games last year with hand and knee injuries. Projected out to 16 games, he would have still only had 587 yards. He has flashed potential, but it's up to new receivers coach Mike Groh (hired from Alabama) to make him into the star that Chicago hoped he'd become when they drafted him.

He's going to have to do a lot better than catching only 50 percent of Cutler's targets of him, or it would simply be a waste of 100 throws and Cutler can't afford to waste any of those.

Bears fans have always had high hopes for Bennett, but now entering his sixth season in the league he has never remained healthy or consistent enough to be a true threat in fantasy football. The good news is that he's still only 26. Maybe Groh can help turn around the Birmingham native into something interesting.

Cutler's former teammate at Vanderbilt, Bennett, can play, but can he play well enough to deserve being drafted in your fantasy league? He could be an interesting sleeper.

Wilson was set to break every receiving record at Washington State, but feuded with head coach Mike Leach and the team and player parted ways last year. Had he stayed on the straight and narrow and not drawn so many negative remarks about his attitude and work ethic, perhaps Wilson would have been drafted in the first three rounds. That showed up in spades during the first preseason game, when Wilson had four catches for 82 yards against the Panthers. Instead, he went to the Bears in the seventh.

Will it be a steal? Only if Wilson matures quick. Otherwise, Trestman won't have any more patience for him than did Leach. If he does, then he could sneak up as someone you'll want to keep an eye on.

Remember that this was a guy who was productive during perhaps the worst era in WSU history. And WSU is nothing if not a myriad of unproductive eras.

Bennett took over as the tight end du jour for the Giants last year and caught 55 passes for 626 yards. The Bears haven't been using tight ends on offense as much as the rest of the league, but again, this is a new regime.

Kromer had Jimmy Graham in New Orleans and while those expectations aren't realistic, he could be one of the best fantasy tight ends not drafted to be a starter. That could change quick.

It starts with Charles Tillman, Tim Jennings, Lance Briggs, Julius Peppers, and Henry Melton, but it doesn't stop there. Major Wright and Chris Conte were productive at the safety positions, while 2012 first-rounder Shea McClellin enters his second season. The Bears also drafted linebackers Jon Bostic and Khaseem Greene to usher them into the next generation of that position for Chicago.

The Bears scored an incredible nine touchdowns last year, were Football Outsiders' top D against both the run and the pass, 24 interceptions, 26 forced fumbles, 41 sacks, and a hard-hit in a Bear tree.

Trestman is here to fix the offense because nothing is wrong with this defense. It's still the No. 1 option for fantasy (and real) football.