Embarking on another rebuild, can the guy that helped build the high-powered offense of the Saints do the same with the Bills? And will any of these guys besides Spiller be worth a fantasy nickelpiece in 2013?

Share All sharing options for: Buffalo Bills Fantasy Football Preview: Spiller? I hardly know why not

In my latest un-Power Rankings, I decided to move the Bills up to the number one spot. While that is normally a good thing, it's not very good in a reverse power rankings list. I'm not a mathematician by any means, but if "first is the worst," you'd rather lag behind.

The Bills have done plenty of lagging this century.

Buffalo has not made the playoffs since 1999. They haven't had a winning season since 2004. They haven't finished with a  top-10 total offense since 2000. You would have to go back 20 years to find a consistently good Buffalo Bills team. The rebuilding starts again in 2013, this time with head coach Doug Marrone and quarterback E.J. Manuel.

Marrone's offensive background is impressive, having helped build the Saints offense during the first three years of Sean Payton and Drew Brees. He spent the last four years turning Syracuse from awful to respectable. Can he do the same with the Bills offense? Is that humanly possible?

It certainly seems promising, but it's far from a guarantee. And even if it does happen, it's unlikely that you will see Manuel running the show with great expertise in 2013, if at all. This next season, Marrone will probably getting a "pass" no matter how good or bad the Bills do.

I think they will do poorly. But how poorly? And how many of their players on offense will be worth one of your precious fantasy draft picks? 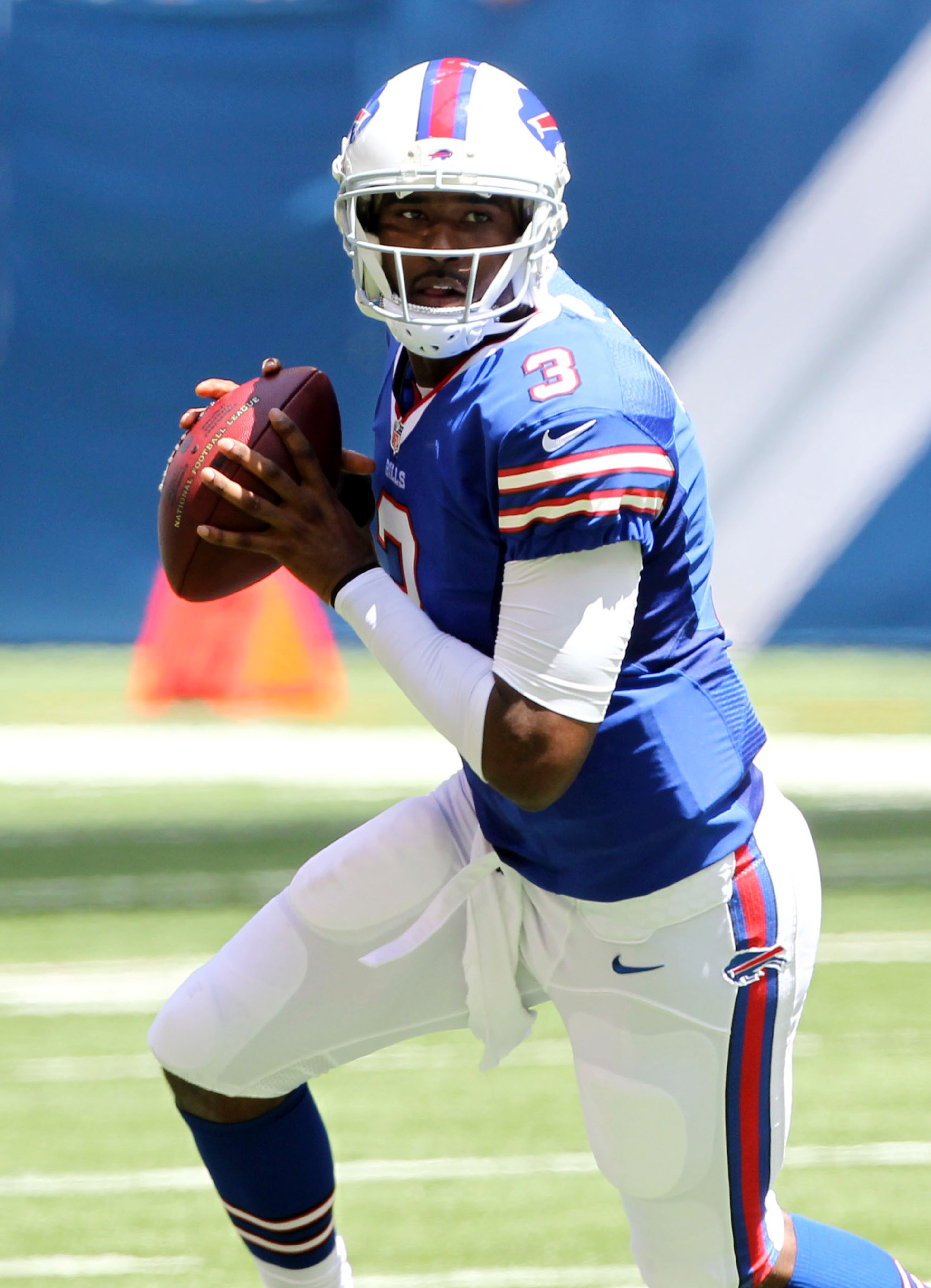 While Ryan Fitzpatrick was bad last season, in some ways Kevin Kolb was even worse. The former Cardinals QB tried his best with an awful offensive line and running game in Arizona, but rarely helped his own cause due to injuries and inconsistency. He's seen as the better fit for Marrone's offense, even if he's only warming the seat for Manuel, but first he has to beat out Manuel.

The Bills do not have a lot of proven talent on offense, and will rely heavily on their two-headed running attack this year. Marrone adjusts his offense based on what pieces he has at the time, and right now he's got one of the game's best running backs, a good wide receiver, a good tight end ... and Kevin Kolb.

Based on that, how much would you rely on passing it? Not much I'm assuming. And I don't think that assumption makes an ass out of either you or I.

Leading up to the draft, there was very little talk of Manuel being the top quarterback taken, but to be fair, 2013 had probably seen more shares of stock fall than Blockbuster Video. First, Matt Barkley was supposed to be a lock at No. 1, then it was Geno Smith. Other experts would tell you that maybe even Marrone's own QB at Syracuse, Ryan Nassib, was the best QB available.

That had a lot of mock drafts pushing Nassib to the Bills, but Marrone wasn't going to draft a player simply because they had worked together previously. You don't see Keanu Reeves getting Alex Winters a part in the Matrix movies, do you? No, Marrone was going to get the best player he thought was available. That was Manuel, a player that quickly rose up draft boards as the big day approached.

Manuel is viewed by most as a raw project that can do everything well, but few things great. He's the kind of guy that could be just as talented with his brain as he is with his arm. The kind of guy that you'll hopefully get the most out of but not necessarily expect the most eye-popping numbers. Then again, we might have said all of those things about Russell Wilson last year.

I don't think he's going to have that kind of rookie year. But he'll come in some time in the second half and start to develop an in-game relationship with his receivers and backs. Then maybe next year, the Bills can switch from automatic to Manuel.

Editor's Note: Since this was first written, Jeff Tuel has been named starting quarterback for Week 1. We have complete faith he will not hold on to the job all season.

Over his last two seasons, Spiller has rushed 314 times for 1,805 yards, 5.7 yards per carry, and 82 catches for 728 yards. That's only in eighteen official starts. What could Spiller do if he was given 350 carries in a season?

That seems like a stretch, but working Spiller up to a mode where he's carrying it 280-300 times doesn't seem all that crazy. In only 207 carries last year, he was one of the most efficient backs in the NFL. If given Adrian Peterson-levels of touches, could he produce a 2,000-yard year?

He's one of very, very few backs in the league where the answer is: yes, he could.

If I had a top-six pick in the draft, I would seriously consider Spiller as the guy that seems as unlikely as anyone to break down or have a bad year. Without much offense around him, this could be like Maurice Jones-Drew circa 2011. I am too conservative to predict 2,000 yards rushing, but I'll gladly bet on that number on an all-around basis.

Jackson is not your typical 32-year-old running back. He only has 932 career carries, but with a 4.5 YPC average and 8.4 yards per reception on 209 catches.

Nagged by injuries over the last two years, Jackson dropped 109 yards against the Jaguars in Week 13 last season. The key player for Buffalo is C.J. Spiller, but Jackson isn't going to be forgotten. His ability to catch the ball out of the backfield and provide a different look than Spiller, means that Jackson is still an integral part of a Doug Marrone offense.

He's just not much of an integral part of your fantasy team unless Spiller gets hurt. If you spent a top pick on Spiller, spend another one on Jackson. Like a good neighbor, this is insurance you won't want to miss out on.

The Bills aren't carrying much depth at the moment at running back other than a few burly fullbacks. Choice's best season came as a rookie in 2008 with the Dallas Cowboys. He hasn't done much since and probably won't this year either. It's likely Spiller, Jackson or bust if anything bad happens.

One of the more interesting scenarios to watch this year is which wide receivers could step up in this offense, because experience and talent seem thin in this group. Steve Johnson is the only one that possesses both of those traits at the moment.

Is Johnson finally ready to take the next step from being a fairly productive receiver, to being a "number one" receiver?

The former seventh-round pick out of Kentucky came out of nowhere in his third year to catch 82 passes for 1,073 yards. He followed that up with 1,004 yards in 2011 and 1,046 yards last season. Some people are just waiting for the other shoe to drop, but instead he has remained as one of the most consistent, if unspectacular, players in the NFL. Now turning 27 in November, could he become the type that gains much more than 1,000 yards?

Until he actually produces at a higher level, it's hard to justify him as anything more than your "tried and true WR2" or maybe even WR3. He's getting that opportunity now with Marrone, but is he more of a Marques Colston or a Lance Moore? We will find out.

My biggest concern in 2013 is that no matter what kind of offense you run, you have to have a quarterback that can run it. His 53 percent catch rate -- combined with a rookie QB and a bad QB -- give me pause.

Donald Jones and David Nelson showed promise with the Bills, but are now gone. That means that it's a wide-open competition for targets outside of Johnson, the running backs and the tight end. How good of a sleeper is Robert Woods?

I go back to what I said about Stevie Johnson and a potentially-bad situation at quarterback. Woods picked up a fiddle at USC, and it the wasn't first fiddle. Rookie receivers almost always have over a year of adjusting to the pro game. Doing it in Buffalo seems even harder.

Goodwin might be one of the most interesting young prospects in the NFL, but he's still mostly just "interesting" and "projectable." Hey, I could also have projected a scenario where the Bills defense wasn't so terrible last year, but that didn't happen.

He already has had a 107-yard kick return, proving that there might not be a more exciting open-field rookie in the league this year, but preseason. My gut feeling is that if Goodwin works out as a receiver, but it won't be any sooner than his third year.

Kevin Fixler wrote about the transition of Olympians to the NFL.

Like Goodwin, Graham was a track star that's now playing receiver in the NFL. As a third-round pick last year, Graham is off to a very intriguing start with 322 yards, but still only catching barely more than half of his targets. He is perhaps one of the more interesting sleeper prospects that is actually a sleeper and few people are probably recognizing that Graham could have a good year.

If he increases his targets by 50%, if he increases his catch rate to 60% and if he holds off the rookies, he'll be very productive. That's a lot of if's statements, especially when I didn't even say, "If Kevin Kolb magically transforms into Tom Brady."

2013 Prediction: 30 catches for 400 yards and two touchdowns (with potential to perhaps double those numbers)

Believe it or not, Chandler is on the field about as much as any tight end in the league. He's a whopping 6'7, but is he going to become one of these big guys that gains 1,000 yards in a season?

While those totals could be a stretch, Chandler has developed into an excellent red zone target with his massive frame and it doesn't seem outside the realm of possibility that he can catch double-digit touchdowns. And that all comes at a discounted rate of being a tight end for the Bills, something that researchers thought could never be possible.

The Bills may have signed Mario Williams last year, but things did not work out as planned. They finished 26th in scoring defense, 22nd in total defense, 23rd in turnovers forced, 31st in rushing yards allowed and dead last in rushing touchdowns allowed.

Marrone hired Mike Pettine, the former defensive coordinator of the Jets where he helped Rex Ryan develop them into one of the very best defenses in the league. Can he do it that quickly in Buffalo with an obvious lack of all-around talent?

If you're going to draft a Bill this year, make it Spiller. Otherwise, all bets are off. If you take the Bills defense, well, that would be as shocking as Manuel being the only QB taken in the first round.

I guess it could happen?