The Dolphins made perhaps the biggest move of the offseason by signing Mike Wallace, but did a failure to address the offensive line negate that positive acquisition? Here's a preview of the offense and some predictions on production.

The 2012 Miami Dolphins seem like a great example of a season where belief overcomes talent. As the focus of HBO's "Hard Knocks" last year, four of the biggest names on the roster during the preseason -- Chad Johnson, David Garrard, Vontae Davis, and Eric Steinbach -- were all gone before the TV crew even wrapped up their own season.

All of which came after the Dolphins parted ways with their best player, Brandon Marshall, quarterback Chad Henne, and franchise legend Jason Taylor.

New head coach Joe Philbin made a clear statement that things were going to be different in Miami now that he was there, and that attitude was just as important as skills. All of which led to a 7-9 finish even though many fans probably couldn't name a single Dolphin other than Reggie Bush.

Expectations last season for Miami were low because on premium cable it looked like Pat Devlin could be as good as Ryan Tannehill. Without any coverage (to my recollection) of Brian Hartline, it was difficult to grasp which players on offense were going to grasp footballs. Who are Marlon Moore, Clyde Gates and Rishard Matthews? Who are Les Brown and Chris "7-11" Hogan? If Tannehill could top 3,000 yards passing it might be a miracle.

Well, like Publishers Clearing House, miracles can happen, can happen to you.

The 2012 Dolphins were better than I expected. Are they better on offense this season, or is it going to be a lot of hard knocks for Tannehill? 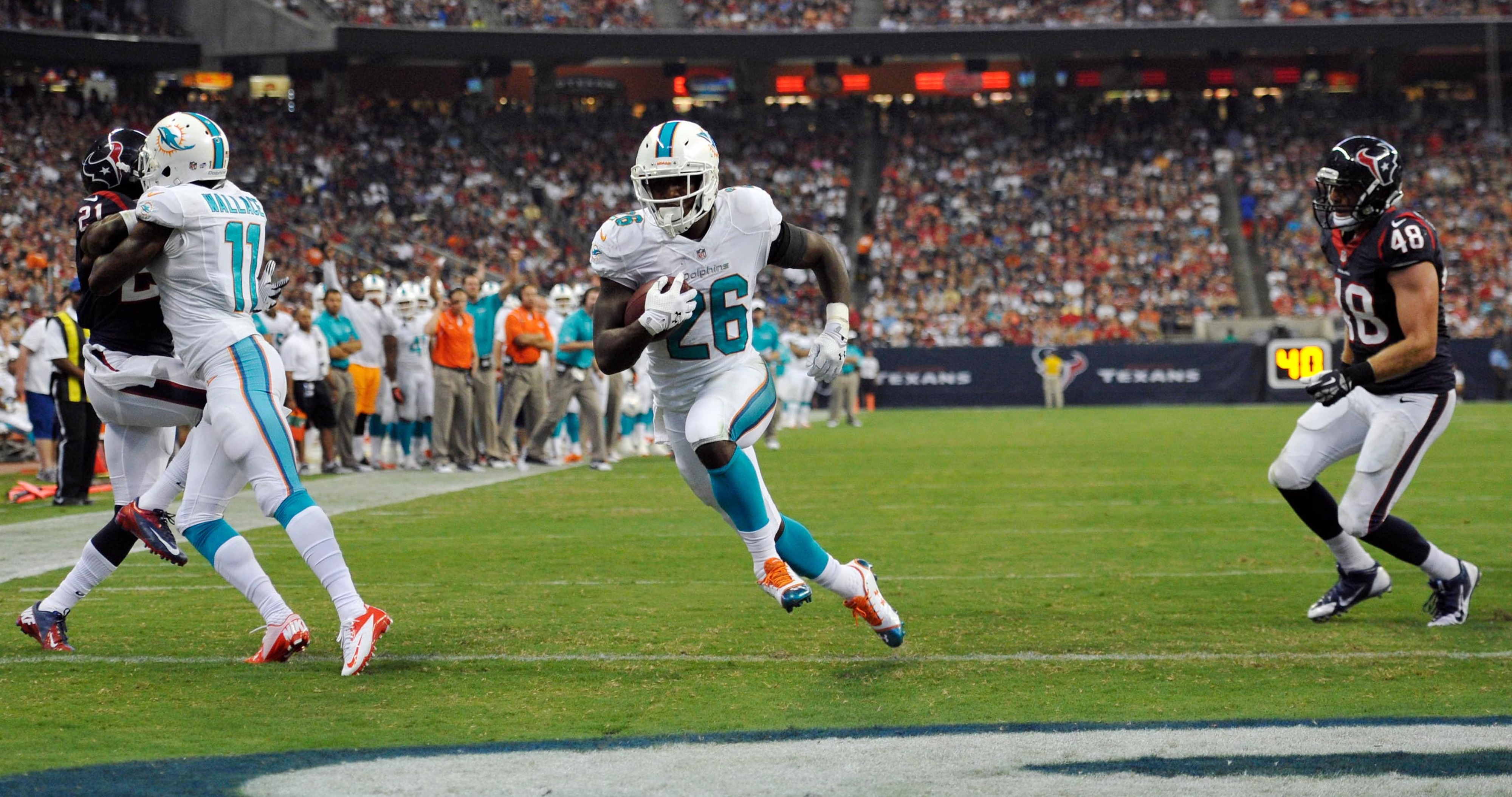 It's interesting that in nine of his 16 games (including only a short appearance in one game against the Jets, so almost in nine of 15 games) Tannehill posted a QB Rating of 86.5 or better. He had terrible games against the Texans, Jets, Titans, and Bills. But against the Cardinals, a very good passing defense, Tannehill completed 26-of-41 passes for 431 yards and 10.51 yards per attempt.

Did I mention that the Miami receiving corps kind of sucked last year?

That group should be much better this season with the additions of Mike Wallace and Brandon Gibson. The loss of Bush removes a backfield target, but Philbin is more so hoping that the running game (17th in rushing yards, 19th in yards per carry) is what actually improves and that will provide a better balance to Tannehill and the passing game.

As head coach of the Green Bay Packers in the early 2000s, Dolphins offensive coordinator Mike Sherman helped orchestrate a balanced attack between Brett Favre and Ahman Green, and that's what they'll be looking to do with Tannehill and his running backs. Whether or not they are successful will have to be seen, but Tannehill showed a lot of potential as a rookie, has a better cast around him, and with only 12 touchdown passes last year ... has nowhere to go but up.

Should it get ugly, Moore is one of the better backup quarterbacks in the league. As a starter in 2011, Moore threw 16 touchdowns and nine interceptions in 13 games. That earned him a spot on the bench behind Tannehill because his upside has been reached, but in a pinch he could get the job done.

Every season has a running back who's bark is more readily available than his bite. The guy who gets drafted in the fourth round because he proclaims that he's going to run for 1,500 yards this year. Coaches are excited about the guy. "He's can't miss!" people shout about a player who only a year ago was a fourth-round pick and got just 51 carries.

Sometimes that guy is Arian Foster. Sometimes that guy is ... well, I would name someone, but that would sort of defeat the purpose of pointing out that there are just as many examples of these players who talk a lot in the preseason, but when Week 1 rolls around they disappear. Sometimes it's not that soon, they could fall off in Week 4, but you never know for sure if it's really as good as it seems.

Someone is asking you to give them $20 in blind faith that they will give you something worth "$20 or more!"

Late in 2012, Miller ran it 10 times against the Bills and gained 73 yards. If during this season he can run it 20 times for 100 yards, consistently, that will be what matters. Then we'll know that 1,500 yards was only the beginning. Miller is young, fast and probably the most-talked about starting running back that hardly played last year.

Does that equal a hill of beans?

What we know for certain is that Miller was better than Thomas. Oh wait, I just remembered the name of a running back who had a lot of preseason hype and was drafted to be a fourth-round fantasy pick based on "coach excitement" and ended up doing very little.

The former second-round pick out of Kansas State has now rushed it 256 times in his career for 906 yards and four touchdowns with 3.5 yards per carry. He was built to be an every down back, unlike Bush, but he wasn't playing like an every down back. And his appearance on "Hard Knocks" didn't win him any fans, often portrayed as a player who didn't care.

I have no rightly idea if that's fair to say of Thomas, TV editing is fun, but it's fair to say he's been a pretty below-average starting running back in the NFL. So he's not starting.

The other back of note is Gillislee. Also from Florida (Miller went to Miami), Gillislee is a 5'11, 208-pound back that became the first player at Florida to rush for 1,000 yards since 2004. The rest of his career was rather blah, but the only thing standing between him and Miller is Thomas.

How unlikely is it really that Gillislee overtakes duties as the No. 2 back, making him one less step away from a bigger role in the offense? It's not likely (and therefore not worth predicting), but Gillislee is someone you'll have to be aware of, just in case.

He's certainly one of the most explosive wide receivers to change teams this year, definitely one of the biggest names, but Wallace signed a $60 million contract with Miami despite putting up the worst season of his career.

He fell out of favor not just because he failed to reach 1,000 yards receiving, but he didn't reach 1,000 yards receiving because he barely caught half of his targets. Per Football Outsiders advanced metrics, Wallace was the No. 1 receiver in the NFL in DVOA in 2010, and then sixth in that same category in 2011. But he dropped to 77th once he started dropping passes.

He was less valuable than a replacement receiver.

That will happen when you're targeted 119 times and only catch 64 of those. But let's not forget that he is still young and the season that stands out from the rest is 2012 and therefore is probably the least likely outcome for Wallace in 2013. Switching teams can change everything for a wide receiver, in both good and bad, but the good news is that Wallace really brings an element to Miami that was missing last year.

And so there is plenty of room for him to do what he does.

The biggest thing standing in the way of Wallace (and the rest of the offense) is what's not standing between the defense and Ryan Tannehill. The offensive tackle situation could be in dire straights, and that could mean fewer long passes to Wallace. Last year, 29 percent of his targets were classified as "Deep" or "Bomb" passes. In 2010, that number was 42 percent, and he was perhaps the most valuable receiver in the league.

Can Tannehill get him more than 30-percent deep passes, or is he going to be spending too much time on his back?

And then there is Hartline, whose 2012 season was like the Anti-Wallace. Where did 1,083 yards come from??? Well, almost a quarter of those yards came in one massive game against the Cardinals in Week four. Other than that, Hartline was decidedly Hartline-esque.

The goal for Hartline should be catches, catches and more catches. Don't worry about yards and touchdowns when drafting him, he's strictly a target in PPR leagues. With Wallace finally bringing a deep threat and making defenses move back like fliers up, Hartline could approach 100 catches if he can stay healthy and Tannehill has a breakout year.

Football Outsiders absolutely fell in love with Gibson last year, putting him almost in the top 10 of DYAR (Defensive Adjusted Yards Above Replacement) with a 62-percent catch rate. He's especially effective in the middle of the field, and as long as he's not crampin' Hartline's style, he should be just as effective with Miami as he was with the Rams.

The two offenses might not be all that different.

Rishard Matthews should be the number four receiver.

Egnew hardly played last year. Sims is seen as a blocker, but his 6'5 frame could one day soon be much more attractive than the 6'2 Keller. One of these guys is going to need to step up in Keller's absence, or perhaps Charles Clay could receive more targets. Sims is a deep sleeper.

Cameron Wake has quietly been perhaps the best pass-rusher in the NFL since 2010. At least, that's what Football Outsiders thinks, though it's hard to argue against 37.5 sacks. However, FO is less impressed with No. 3 overall pick Dion Jordan, a player out of Oregon who they traded up to get.

FO saw Jordan as only the fifth best pass-rusher in the draft this year, let alone top three overall.

In addition to that, the Dolphins only intercepted 10 passes last season, none of which were returned for touchdowns. They also didn't recover any fumbles for touchdowns. Miami can hang with teams perhaps because they're so decidedly average. They are the replacement level team and that goes right down to their defense.

They've replaced some players, added Brent Grimes from the Falcons for example, but how much better is it really? Maybe in the AFC East, where even the Patriots offense looks vulnerable, they won't allow a lot of points.

But what will they do?