The Jets offense finally went a year without being carried by the defense, and it was quite noticeable. Can they turn it around with a new coaching staff around Rex Ryan, and can Mark Sanchez keep his job longer than a week?

Share All sharing options for: New York Jets fantasy football draft preview: How long until the Jets are sans Sanchez?

I have been among the people teasing Mark Sanchez since he entered the league four years ago, taking over as starter for the Jets almost immediately into his rookie season. I don't exactly know why I spend so much time making fun of Sanchez; I don't have any reason to hate the Jets, or Rex Ryan, or even Sanchez himself, but I do.

Is it jealousy? Perhaps. I could see myself being jealous of a bad player who's rewarded by being surrounded by a good team, and that's probably everything that has to do with my disdain for Sanchez. It's not enough that he's also really handsome?

Sanchez coasted to AFC Championship games in 2009 and 2010, riding the waves of one of the best defenses in the NFL even though his own numbers were mediocre. Perhaps even, Markiocre. But Markiocre would have been a blessing even for Sanchez in 2012, the year that everything finally fell apart for the Jets and saw Sanchez relegated to the bench for a game.

Much has changed for New York, even as it stays the same. They cleaned a lot of house, but Sanchez and Ryan remain the prominent figures for the Jets. Yet if they can't finally put a respectable passing offense on the field in 2013, then those two will also be gone by 2014.

What hope is there for a Jets player making it onto your fantasy team? 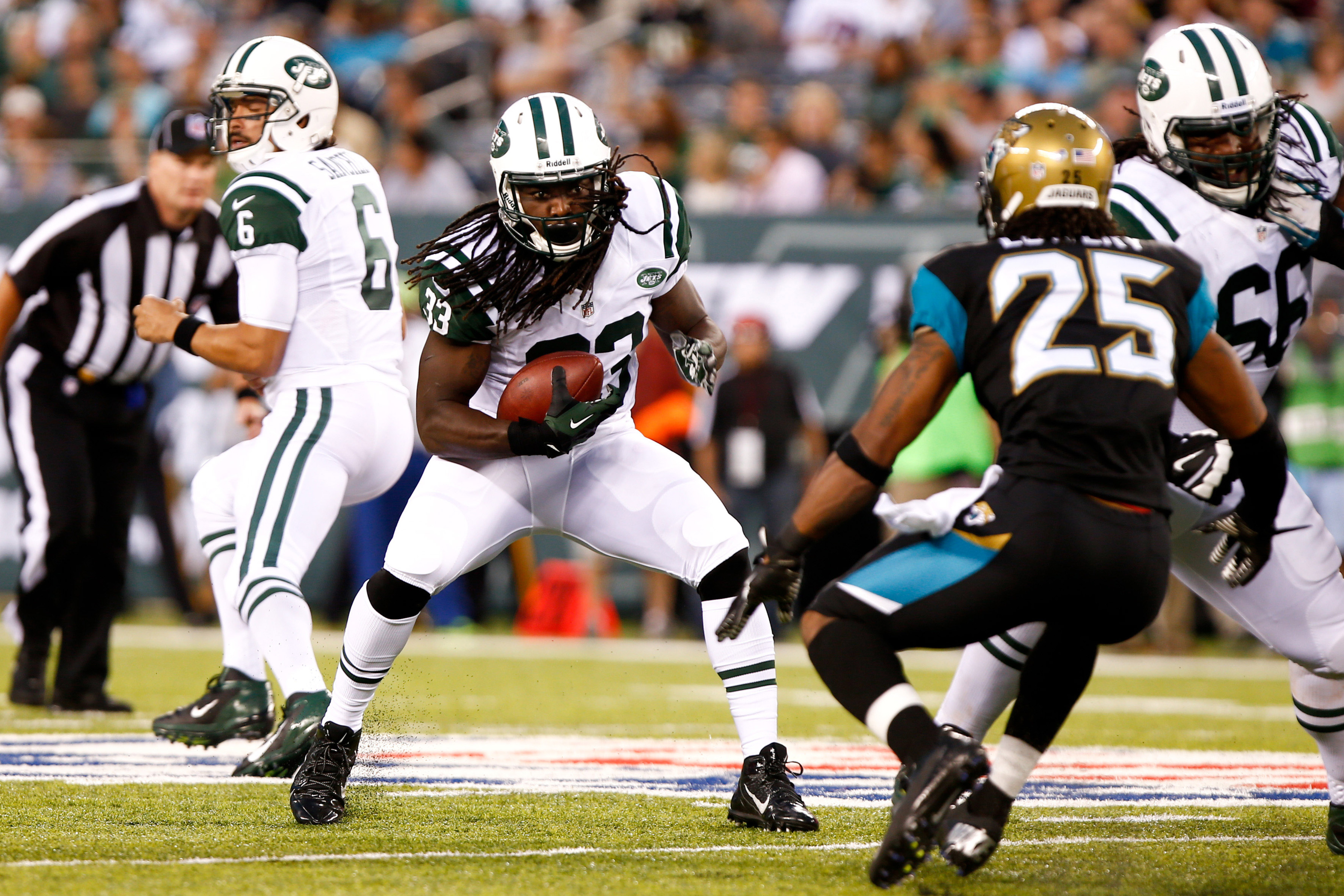 Smith put up some mind-boggling numbers at WVU last year, the kind of numbers that in the beginning of the year had people thinking "Could this be the next Robert Griffin?" due to the fact that he had seemingly come out of obscurity, is black, and hey it just so happens that his most ridiculous game of the year came against Griffin's Alma Mater Baylor.

Except that's just the thing. Smith's game against Baylor was so ridiculous (656 yards, eight touchdowns, zero interceptions) that it threw all the other numbers out of whack. Smith threw 25 touchdowns and no interceptions in his first six games of the year, but it was a relatively soft schedule. Over the rest of the season, he had 17 touchdowns and 6 interceptions.

Not bad, but not spectacular. And unlike Griffin, Geno Smith has not shown an ability to run the football.

The smart thing to do would probably be to sit Smith for at least a year. Of course, Mark Sanchez's shoulder injury, along with him being Mark Sanchez has the Jets starting Geno Smith Week 1 against the Tampa Bay Buccaneers. The Mark Sanchez era could be coming to a merciful end. That bodes well for Smith seeing consistent playing time. Unfortunately, given the Jets offense, that does not bode well for consistent success.

Per Football Outsiders advanced stat DYAR (Defense-adjusted Yards Above Replacement), Sanchez was the worst regular starter in the NFL. Though he played more games than these players, he still finished with fewer DYAR than Ryan Lindley, Brady Quinn, Matt Cassel, and John Skelton. The worst. The Jets replaced offensive coordinator Tony Sparano with Marty Mornhinweg, and the former quarterback has worked with the likes of Brett Favre, Steve Young, Jeff Garcia, and Donovan McNabb.Could  he squeeze any life out of Sanchez?

We may now never know. Sanchez is dealing with a shoulder injury and this might be the situation that finally ends the recent disaster that has been the Mark Sanchez era.

Brady Quinn, Matt Simms vie for backup snaps and it wouldn't be surprising to see either forced to make a start this year.

Ivory provides significant sleeper value in 2013. While of course everyone is aware of Ivory, do we really know how good he could become? Set back by injuries for most of his career, Ivory is out of New Orleans and ready to get a real shot with a football team that needs one star player.

That could be Ivory.

In 256 career carries, Ivory has a 5.1 yards per carry average. Consider that the Saints other running backs haven't been nearly that productive on the ground, with Mark Ingram averaging only 3.9 yards per carry last year. Pierre Thomas has had his moments, and Darren Sproles is a great all-around talent, but Ivory has an opportunity here to really show what he's got and that it wasn't just a lucky 256 carries. He just needs to stay healthy, and that's far from a guarantee.

He could be the guy who saves Rex Ryan's job. Is that a good thing?

Bilal Powell sounds like something a young John Travolta would say. He was a hot add in fantasy leagues one time last year, but for the most part he was as good as Travolta's career in the eighties. Powell is currently listed atop the depth chart for the Jets, but I don't think that will last for as long as Ivory's hamstring is healthy.

Meanwhile, sometimes Mike "the Good Son" Goodson looks as promising as a young Macauley Culkin. He had a great little stretch run for the Panthers back in 2010, but also has health and consistency issues. He's really not a guy who you might expect to run for 1,500 yards one day, but he could catch 50 passes if only he stayed healthy and active. Especially in a west coast offense.

Let's hope that the rest of his career doesn't turn out like Culkin's. He's found himself way down the depth chart at the moment.

Luckily it was the least tumultuous with Kerley.

His 59 percent catch rate is actually fairly decent, especially considering what the other Jets did. In a west coast offense, he should get even more than 96 targets and could threaten to do considerably more than that. The former fifth round pick out of TCU is off to a nice start in his career and could join the 1000-yard club this year. Even with the Jets, I say that he will.

It seems hard to believe, but Holmes doesn't even turn 30 until next March. Maybe it's just being around a lot of other veterans that makes him seem so old, maybe its the fact that he missed most of the season in 2012. Or maybe it's that his production took a nosedive in 2011.

When he had Ben Roethlisberger, Holmes was a budding star. The star has imploded on itself with the Jets and I wouldn't expect a turnaround until the quarterback turns around. Holmes will probably miss the first month of the year and even if he returned earlier than that, he's a risk to miss time later in the year.

He went downhill after his first game of the year (89 yards, 2 touchdowns) but lets not forget that he was young (21) even for a rookie. He's 6'4, 215 lbs, and he can move. This is somebody who, in the future, I could see as a top fantasy receiver.

But he's still young and this is still a shaky passing offense.

Here are two guys you don't need to worry about!

The Jets parted ways with Dustin Keller, but Cumberland is younger and actually fairly productive last season. If you want a really deep sleeper candidate at the position, Cumberland might secure over 500 yards this season. Perhaps more. And don't get fooled by the Winslow thing. There's a myriad of reasons that teams weren't keen on keeping Winslow last year.

The Jets are just the team that ignores all reasoning.

The Jets pass defense was fine last year even without Darrelle Revis, so there's reason to believe it will still be fine. New York was ninth in net yards per pass attempt allowed and second in passing yards allowed. They traded Revis but drafted cornerback Dee Milliner with the ninth overall pick, and since Revis missed basically all of last year, it should only get better.

They also drafted defensive tackle Sheldon Richardson with the 13th overall pick and will be looking for improvement from linebacker/defensive end Quinton Coples. They also still have Muhammad Wilkerson, one of the most underrated DEs in the league.

The Jets defense pitched a couple good games last year, but also allowed a fair share of home runs; they allowed 49 to the Patriots in Week 12. They'll need to do much, much better than that if they're going to not only win games, but save the jobs of Ryan and Sanchez...