Arizona Cardinals fantasy football draft preview: Getting rid of Skeltons and Kolb webs from your closet

Possibly the worst offense in the NFL, the Cards added a veteran QB, veteran RB, and elite guard prospect -- but is it enough?

Share All sharing options for: Arizona Cardinals fantasy football draft preview: Getting rid of Skeltons and Kolb webs from your closet

The Arizona Cardinals have had their fair share of being terrible, but perhaps nothing will compare to their terrible offense of 2012. Though very little has been expected of Arizona's offense throughout the years, one would at least hope that the presence of one of the greatest receivers of all time would help quell a desert disaster.

Instead, the Cardinals sucked Larry Fitzgerald into their suck vortex, and took his fantasy owners with him as collateral damage of great sucktitude.

After finishing 31st in the league in scoring and 32nd in total yards, with perhaps the worst running attack that modern NFL fans have seen, the Cards began to fall and that tumble started at the top of the house. Rod Graves was fired as general manager and replaced by one of his assistants, Steve Keim. Veteran coordinator Bruce Arians was hired to be head coach after helping lead the Colts to the playoffs last year in the absence of Chuck Pagano. Arians brought along his longtime offensive line coach Harold Goodwin to help run the offense in Arizona.

That's perhaps where the biggest rub has come in the consistent failure of the Cardinals to score points. They consistently run out one of the worst offensive lines in football. There's hope that changes for good under the guidance of Arians and Goodwin --  and if they can turn that around, perhaps the offense will finally produce some consistent fantasy stars outside of Fitzgerald.

The Cardinals drafted guard Jonathan Cooper with the seventh pick of the NFL draft, perhaps finally giving them at least one elite player along the offensive line. Unfortunately, Cooper suffered a fractured fibula and is lost for the season. The Cardinals will hope to patch things together at left guard. In the meantime, the offensive line will include the return of left tackle Levi Brown from a torn triceps and the maturation of second-year tackle Bobbie Massie on the right side. Had Cooper stayed healthy, there was still no guarantee the line would have even been average. For now though, there is at least a change to the line, which is already a sign of improvement over last year's disaster.

If Arizona can get five competent players to block for this next set of guys, we might see a much-improved offense and a few players worth drafting in fantasy. If not, then the Cards might find new levels of suck. 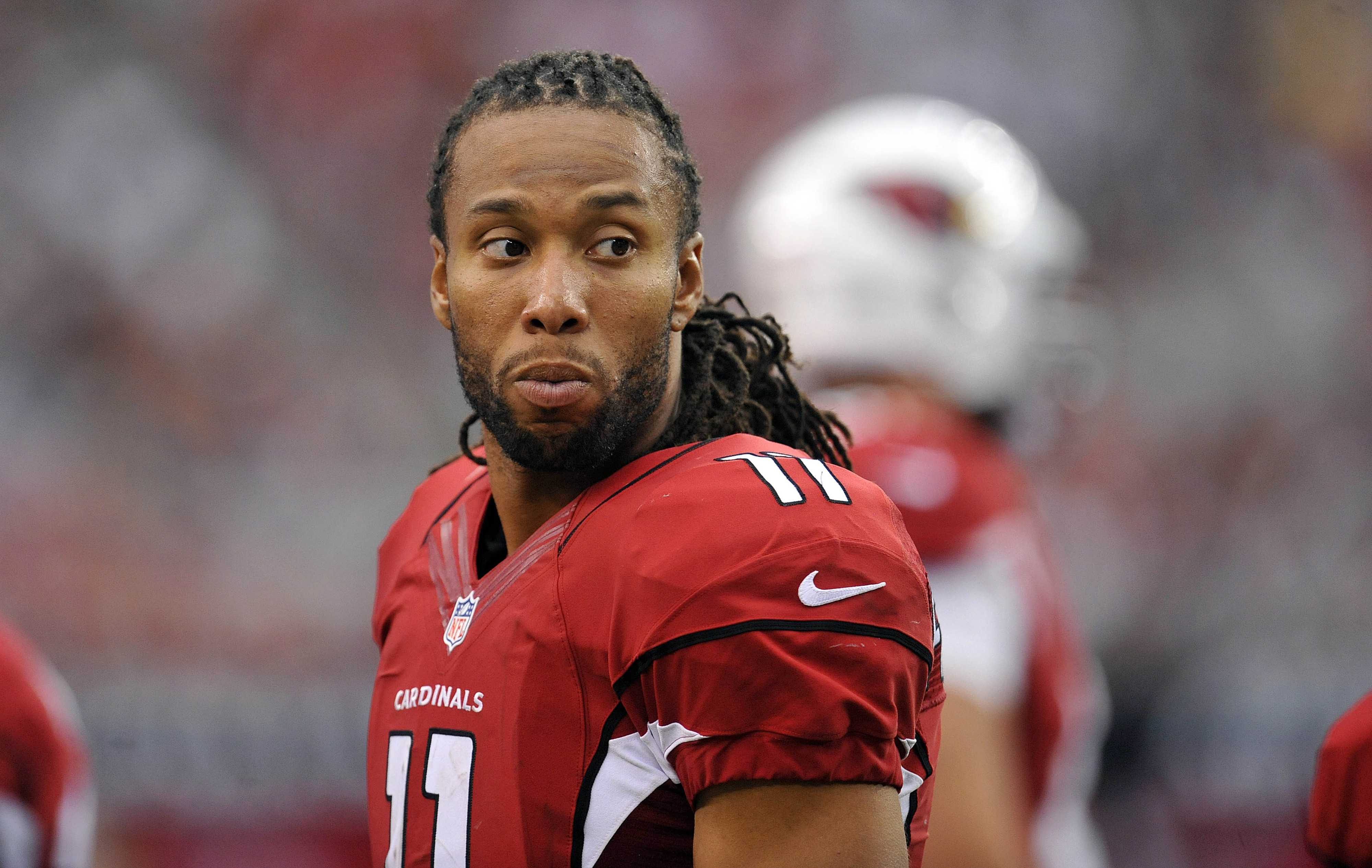 Palmer was a star at USC and he entered the league as a No. 1 draft pick because he had everything you could ever ask for in a QB prospect: size, ability and experience playing on the big stage. He was a "prototypical" quarterback. For a while, he even performed like a top-tier signal-caller in Cincinnati.

But those days are long gone.

Over the last five years, Palmer has completed 60.9 percent of his passes for roughly 3,500 yards during his healthy seasons --sporting something like 22 touchdowns and maybe 15 interceptions, with about 7.0 yards per attempt. His numbers last year in Oakland are just about right. The only thing that Arizona provides that Oakland didn't is a true No. 1 receiver.

The addition of Fitzgerald to Palmer's targets is helpful, but putting a 34-year-old QB behind this offensive line could be a recipe for disaster. It's what sent Kevin Kolb to the sidelines last year just when Arizona was starting to heat up, and it's troublesome for anyone thinking that they will wait on a QB in the draft and go with Palmer for a reason as simple as "maybe he throws 30 touchdowns in the desert."

Maybe he does. But it's not what we are used to seeing from him and Arizona's still a place that housed perhaps the worst offense in the league last year. Arizona did well to replace Kolb and John Skelton, but they still have some work to do if they're going to both block for Palmer and give him some more weapons to use. And that's without mentioning that the defenses in the NFC West are miles above the defenses Palmer was used to in the AFC West.

Stanton has not played in a game since 2010 with Detroit -- and this was a guy that Arians was praising as someone whot would be just fine as a starter, even right as they acquired Palmer. Lindley had zero touchdowns and seven interceptions last season. It's safe to say that does not inspire fantasy confidence.

"Bad" does not do justice in describing the Cardinals' running game last year. If it were up to Michael Jackson, then "bad" could even be portrayed as "good" and oh no, this was not good. Not unless we gave "good" the same treatment that MJ gave "bad"  and translate it as "the worst pile of crap we've ever seen."

In that case, then yes, the Cards running game might have been ... "good."

LaRod Stephens-Howling led the team with 111 carries for 357 yards, averaging 3.2 yards per carry.

All of which should have opened the door for former second-round pick Ryan Williams, but there were two things holding him back:

- Williams missed all of 2011 with a torn patellar tendon, and then only played in five games last year due to a shoulder injury.

- Williams wasn't any good either.

Ryan Williams carried the ball 58 times last year for 164 yards, averaging 2.8 yards per carry. After two years, they are the only five games worth of NFL data we have on Williams, and he was only effective in one of those five games. Williams had 13 carries for 83 yards against the Eagles, but couldn't top 33 yards in any of his other four.

Oh, and by the way, Williams is hurt again.

Drafting Ryan Williams as anything more than your fourth option at running back is akin to masochism. The same pain that has been inflicted upon Williams over the last two years is now bound to creep onto your fantasy roster and perhaps inflict the same pain in any playoff hopes you have. Sure, it's not Williams' fault (I'm sure he feels much worse about this than you do) but it's still the awful truth.

The Cardinals haven't been able to run the ball, and Williams can't stay on the field. He could have a big season if everything went right, but predicting that to happen would be like predicting that Arizona is going to win 10 games. It could happen, but it's not bloody likely. Revenge of the Birds wonders if Williams will even make the team.

And so to protect the guy that can't stay healthy, the Cardinals signed ... Rashard Mendenhall?

And "one year ago" is much closer than "two or three years ago," I think. I'm not a math expert but if that's on the Wonderlic, I think I'm going to do pretty, pretty good.

Mendenhall has had lingering injury issues in training camp, and that could open the door for one of the rookies that are waiting for an opportunity. As of right now, Mendenhall is probably the best back in Arizona.

Ellington and Taylor weren't really separated by enough picks for you to consider that Stepfan is necessarily the better prospect. They're both slightly different in what they can do, but the winner will be the one that has the hot hand.

If (when?) Williams and Mendenhall open the door for the next generation at Cardinals running back, either of these guys could be interesting pickups. But again it will only matter if the O-line becomes completely different than what it was last season.

2013 Predictions: Mendenhall, Taylor, and Ellington might all reside in that same area of "value" until the year begins and a depth chart is decided. In reality, Williams isn't even the leader of the pack at this time. Mendenhall is worth taking a flier on as a number four back -- but there's just no reason to think that you can invest a lot into any one of these guys. Even if one of them ends up rushing for 1,000 yards, how could we predict which one it is? Wait on it.

He finished last in the NFL in Defense-adjusted Yards Above Replacement, but we can't assume this is the end of the line for one of the best receivers of our generation. We have seen prior examples of receivers that struggled to work with terrible quarterbacks and then bounced back when a better passer came along, with poor seasons like Randy Moss in Oakland or Reggie Wayne in 2011.

Fitzgerald has put up 1,400 yards four times in his career, including 1,411 in 2011. I don't think that Carson Palmer has a whole lot left in the tank, but it should be enough to make Fitzgerald a WR1 again.

Floyd was my favorite receiver available in the 2012 draft. He's got size, speed, but he didn't have anyone proper throwing him the football. In this environment, he could finally thrive in a Bruce Arians offense.

Roberts might be one of the most underrated receivers in the NFL. He had the most value of a receiver on the Cardinals last year by far, though to be fair it was pretty easy to leave him alone while the No. 1 corner covered Fitzgerald. If an offense's only threat is Andre Roberts, the defense will be okay with that.

But the emergence of Floyd could mean less attention from the QB for Roberts.

Jaron Brown secured the number four spot, and Kerry Taylor is on the practice squad.

A tight end in an Arians offense is usually more like an "efficient" tight end. Think Heath Miller, where you might get anywhere from 500 to 700 yards per season. Do the Cardinals have any tight ends as talented as Miller? Probably not, but Housler could see himself integrated into the offense even more this year, and maybe he could get you out of a bind if your starting tight end goes down.

Arizona had the second-most interceptions in the NFL, 17th in scoring defense, 12th in total defense, fifth in passing defense, and sixth overall in Football Outsiders' DVOA measurement. Still, there are some significant changes.

Defensive Coordinator Ray Horton is gone. Daryl Washington has been suspended for the first four games of the year. Safeties Kerry Rhodes and Adrian Wilson are gone. Cornerbacks Greg Toler and William Gay and linebacker Paris Lenon are all gone. This is going to be a much different defense, though with Patrick Peterson, Washington, Darnell Dockett and Calais Campbell, it should still be decent.

It could be worth a pick if you decide to wait on drafting a defense, but it is also not a team that I would endorse as "must draft" by any means. If the defense does take a step back and the offense doesn't take a step forward, 2013 might be even uglier than 2012.

And that would be really ugly.