San Francisco 49ers fantasy football draft preview: Looking for somebody to catch on

The 49ers are trying to piece things back together after some injuries and disappointments this offseason, so who's left to be had in your fantasy league? Plenty.

Share All sharing options for: San Francisco 49ers fantasy football draft preview: Looking for somebody to catch on

Historically, how do the 49ers recover from a Super Bowl loss? We have no idea, since it's never happened before.

San Francisco was a perfect 5-for-5 in Super Bowl appearances up until their 34-31 loss to the Ravens in February, and they are trying to become the first team to lose the Super Bowl and return to the big game since Buffalo in 1993. It won't come without some big changes.

Alex Smith was traded to the Chiefs, Delanie Walker left in free agency, as did Ted Ginn, Dashon Goldson, Isaac Sopoaga, and Ricky Jean-Francois. I don't know if Randy Moss left in free agency or if he just floated away like a Mylar balloon in the wind, but he's gone, too. Also not suiting up for Week 1 will be Michael Crabtree (Achilles) and Mario Manningham (ACL, PCL), so who will suit up and can they help the 49ers return to the big game and your fantasy playoffs?

You could make a good argument that the top fantasy quarterback this year will be in San Francisco. You could do the same for the tight end, and possibly even the 30-year-old running back, because the entire offensive line could start for the NFC in the Pro Bowl. Oh, and if you like defense, they've got that as well.

The 49ers might have lost the Super Bowl for the first time in franchise history, but they're still as good a bet as any to go back this year. Here's a look at some guys you might want to draft in your fantasy league: 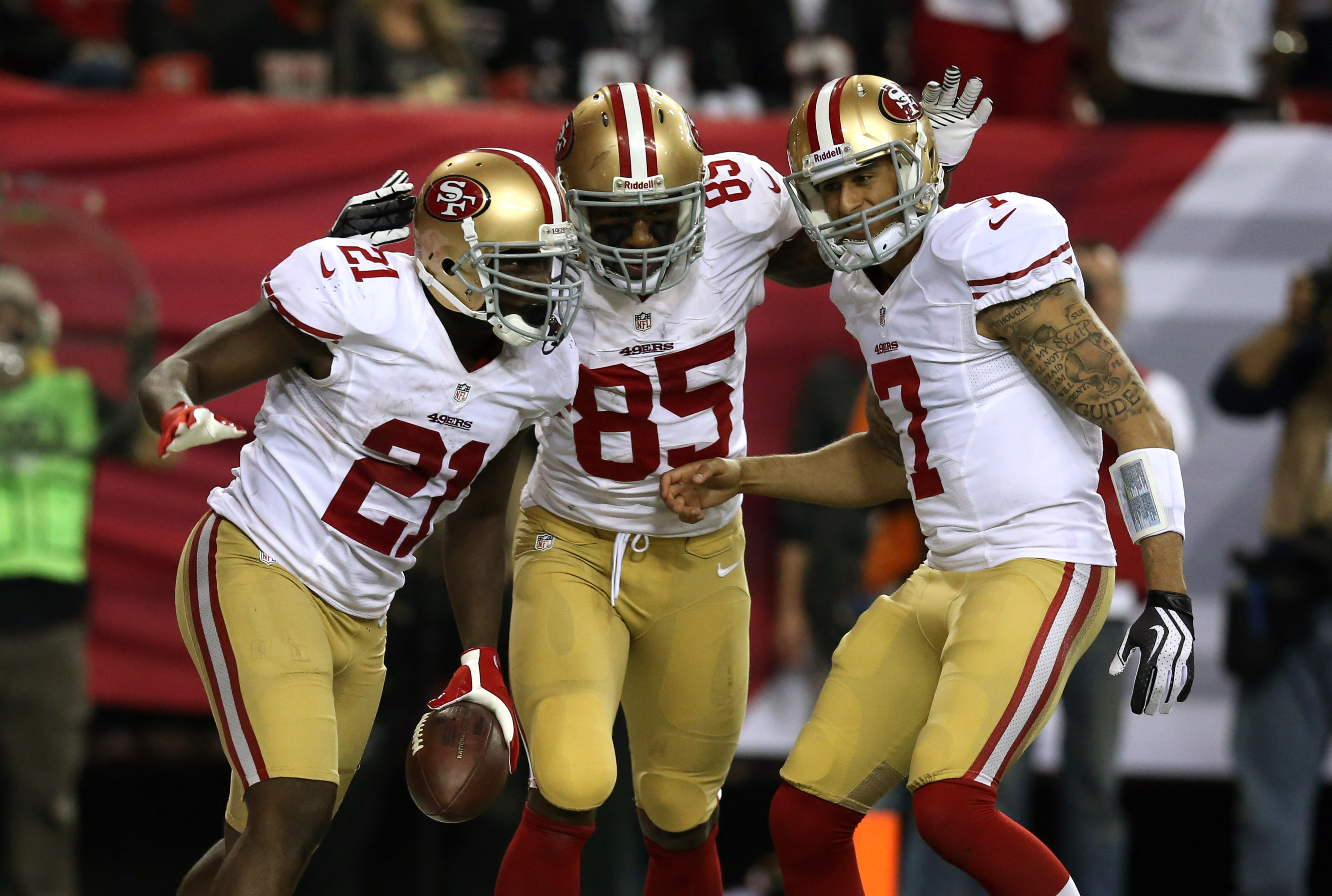 Alex Smith didn't do anything to lose his job other than get hurt and provide fans with an extended look at a player that instantly became one of the most exciting in the NFL. Kaepernick was drafted to be the franchise QB, but Harbaugh was given the opportunity to let Kaepernick study from the sidelines while he had Smith playing so well. When Kaepernick was able to put those studies into practice, he simply played better.

Kaepernick scored a touchdown in all but one of his 10 starts (including playoffs) last year. In fact, he scored 18 touchdowns in his 10 games. He threw for 798 yards and ran for 264 yards in three playoff games. Not very many teams would have had the luxury to sit a player like that for a year and a half, but you can rest assured he won't be resting again any time soon -- but is he a one-man show that makes the players around him better or vice versa? He's certainly going to be tested in that regard to start the year.

Crabtree will miss an extended period of time. A.J. Jenkins will officially do nothing with San Francisco. Frank Gore turns 30.

The key here is that the 49ers still have maybe the best offensive line in football, one of the best tight ends and a great running back, AND added Anquan Boldin. I have no idea who the No. 2 receiver in San Francisco is, but so what -- they didn't really have one of those last year either.

One luxury that the Niners don't have anymore is a backup anywhere near the quality of Kaepernick (or Smith).

Gore has been protected pretty well in his career. After a college career at Miami tortured by injury, Gore hasn't carried it more than 300 times in a season since 2006 and that's kept him pretty healthy throughout his professional career. That hasn't stopped him from being productive though.

He also has become less and less utilized in the passing game under Harbaugh; will that change with the loss of Crabtree? Probably not. Is the fact that Gore is now 30 a bigger deal than 49ers fans want to admit?

Gore is a great player and he has proven that he hasn't lost a step (52-yard run in the preseason), but would I hesitate to draft him in the first round when I'm spotting a dozen other great players that are ages 22 to 27? Yep. That doesn't mean he won't do well again, that doesn't mean he's finished, it just means there is a solid bet to hesitate. Maybe that's the benefit to someone else in my draft.

Hunter returns from an Achilles tear last season and he has a lot of rust to shake off. When will Hunter be ready to take on a significant role in the offense? I wouldn't expect him back up to full speed until at least a month into the year, but eventually I still think he's going to be a good most-every-down back.

Perhaps by midseason he's playing an even bigger role than expected should Gore's age catch up to him. (Age seems to be the only thing that could catch up to Gore).

James was personally one of my favorite players in the draft last year. He didn't play much with the team until Hunter's injury and then he showed how explosive he can be ...

James isn't an every-down back and his biggest contribution should come on special teams. If your league counts kick and punt return yards, I expect James to return at least one or two for scores.

The acquisition of Boldin from Baltimore was supposed to provide a big, physical option that complemented Michael Crabtree -- not replace him. Boldin and Crabtree are different types of receivers and Boldin hasn't been nearly as productive as he was in the beginning of the career.

It's going to be difficult without another receiver to draw attention away from him until Crabtree returns. If he does.

Baldwin had All-American hype at Pitt, but has struggled to adjust to the professional level. That's why he was available in trade for a receiver that was probably going to get cut. He caught five passes for 82 yards and a touchdown in his second career game (which came in Week 7 partly because of a locker room fight that left him with an injured wrist) and thus far it's still a career-high in yards and catches.

He's had just one touchdown since.

Jon Baldwin might have just found a new home, but there's still no guarantee he's going to make the roster. Andy Reid and Jim Harbaugh were likely just giving these guys a chance to stick somewhere. They weren't going to make it where they were.

2013 Prediction: With his size and raw talent, Baldwin's career isn't over, but he's fighting an uphill battle. Not worth a flier at this point.

David Fucillo of Niners Nation had this to say about Williams:

Kyle Williams is looking like the next best option after Anquan Boldin. He is talented, but has never been able to put anything together with consistency. He's entering Year 3 so hopefully the light goes on. He is getting his best opportunity yet, so we'll see if he can take advantage of it. He's the only other receiver I'd consider a draft pick on, and even that would be fairly late.

The catch rate is better than I expected, but why so few targets? It's not like the 49ers have been loaded at wide receiver over the last two years. He's also had significant ball security issues.

Nobody knows for certain when Crabtree will return, I'm sure that the team will give him a chance to do so since they plan on going to the playoffs, but there's a high enough risk that he misses the whole year that he's not worth considering at this point.

Receiver is one of the toughest positions for players to make the adjustment from college to the pros. Patton has missed some time during camp with injury and so is already set back a little.

Formerly of the Dolphins, Moore's specialty is the big play (20.3 yards-per-catch in career, but on just 12 catches), but at this point the 49ers could use someone that can make any play. Fucillo calls Moore a "deeeeep sleeper" with five 'e's.

Anything more than two 'e's and, you know, it's not worth a flyer, but worth an eye-er.

The consensus last season was that even though Kaepernick was changing some fantasy teams for the better, he was also ruining the production of one of the best fantasy players. Vernon Davis caught four touchdown passes in the first three games of the year, had 106 yards in Week 5, but completely disappeared over the last six games of the season.

Despite totaling 83 yards and a touchdown in Kaepernick's first start, Davis had only six catches for 61 yards and no touchdowns in the final six games.

However, Davis exploded in the playoffs, totaling 210 yards against the Falcons and Ravens. Fucillo adds that Davis and Kaepernick "have been working to improve their rapport" and that could make for some ridiculous numbers this year if true. Davis is at least probably in line for a lot more targets.

Vance Refrigeration is a good prospect and, as the theme for the 49ers this year, working through some injuries. A sleeper, but not one worth drafting.

There are some important changes for the 49ers, including the loss of safety Dashon Goldson in free agency, but the defense is still plenty good.

The 49ers are still a top three defense. Willis, Bowman and Smith are three of the best IDP players around.