Is this just fantasy? It looks like the green-and-blue team from the Northwest has finally escaped from reality.

Share All sharing options for: Seattle Seahawks fantasy football draft preview: Is this the real life?

As a lifelong Seahawks fan who has typically exuded nothing more than positivity and hope that I have never had any business hoping, even I can't begin to explain what happened last year. I went into the year believing that if everything went right, Seattle could get into the playoffs with a 9-7 or 10-6 record. After a 24-21 loss to the Dolphins that dropped them to 6-5, I tried to encourage Seahawks fans that it was no time to quit.

If you aren't mathematically eliminated from the playoffs and if you're not the Raiders, don't quit. We worked too hard to quit at 6-5, even if it looked pretty desperate. Apparently, Russell Wilson likes desperation.

The Seahawks didn't just win their next five games, they ate entire footballs whole and crapped out Ws. Seattle beat its next five opponents by a total score of 193-60. The Hawks beat the Bears in Chicago and the Bills in Toronto. They beat the Cardinals by 58 points and they beat the first-place 49ers by 29. They went into Washington in the first round of the playoffs and after a slow start, won pretty easily by a score of 24-14.

Even when they lost to the Falcons, it took an ill-advised Pete Carroll timeout to stop the Seahawks from beating the NFC's No. 1 seed on the road.

I may be headed into this season with more confidence in this team than I have ever had by far (and I went into the 2005 season thinking that Seattle would win the NFC), but as Hawks fans, we will always ironically be grounded. We will never forget the decades of suffering. We won't ignore how quickly everything can fall apart and crumble before you faster than Percy Harvin's hip.

But for now, I'll just enjoy the hell out of it.

Here is a lot of good news (for me) about the Seattle Seahawks: 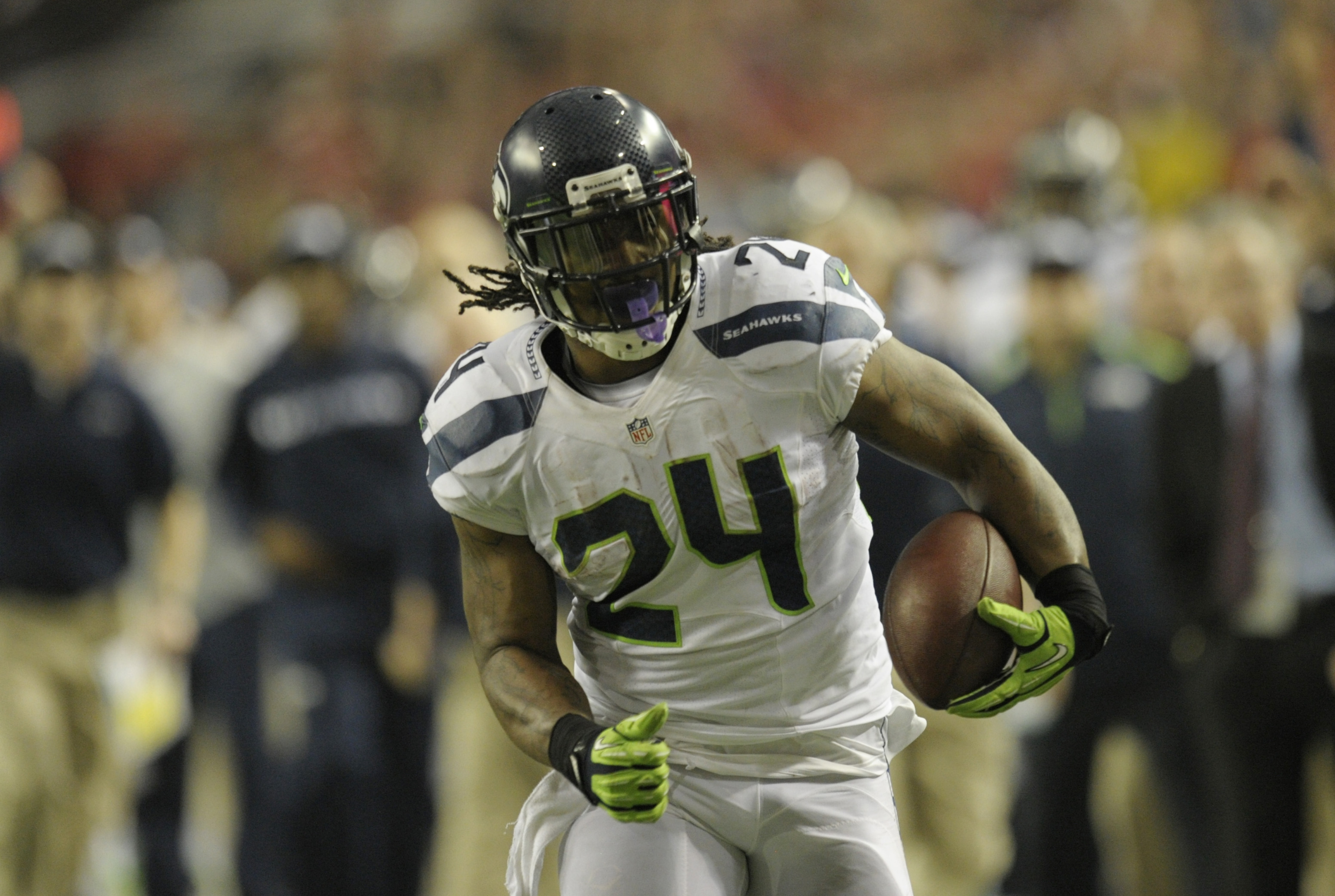 I advocated for starting Matt Flynn up until the conclusion of the third preseason game in 2012, in which it was quite obvious who the better player was. It wasn't all that obvious after a few games and watching just how contained this offense was because of the (no pun intended) shortcomings of the rookie QB.

No team passed it fewer times than the Seahawks did last year. That seemed like a problem after a 4-4 start and a pretty awful stat line against the 49ers in a critical Week 7 loss, but it wasn't a problem by the time the playoffs rolled around.

By then, Wilson made every other deity look like a completely false idol in comparison.

After posting one of the most successful rookie seasons in NFL history, where can we expect Wilson to go from here? To say that he will do a whole lot better seems unbelievable; to say that he will get worse seems even more so. Really, Wilson was a different QB and the offense was on another level after the implementation of the zone-read option in the middle of the year. That's when we started seeing "50-burgers" as it were.

I'll be as modest as I possibly can be.

It seemed like Brady Quinn had no competition to win a job with Seattle up until Jackson was signed. Quinn really wasn't all that terrible with the Seahawks in 2011, he just wasn't great and he was really frustrating at times. Quinn had a decent preseason, but Carroll must have seen something he didn't like and cut ties with the 2007 first-round pick.

As for Jackson, if forced into action, he would be average. The offense is a lot better than the last time he played in Seattle. Also, if Tarvaris Jackson has to play QB, that probably means I've entered the deepest depression of my life.

Over the last 10 games of the season, Lynch broke 100 yards in eight of those games and scored 10 times. He is a top-5 choice in fantasy drafts. When you take him, scream out "Hold mah picccckkk!!!!"

Turbin wasn't bad last year, but clearly doesn't have the all-around skills of Lynch, with Michael right on his heels. That hardly means he doesn't have a future with Seattle or in fantasy, but despite being second on the team's depth chart, don't expect big things from him this season. There is no reason to think that anyone in the backfield besides Lynch will be very valuable in fantasy this year, but if you draft Lynch you have to take Turbin, too.

That said, if Lynch goes down to injury and Turbin or Michael had to take on a lead-back role in this offense, they could definitely be the steal of the year in fantasy. It's just setup wonderfully with the zone-read option to break open someone for a lot of yards and carries.

Michael was one of the top performers in the NFL during the first week of the preseason and a lot of people think he was the best running back available in the draft this year. That said, at least for now, he's been relegated to third on the depth chart behind Lynch and Turbin.

Michael could be a great option in years to come, and keep an eye on him this season if the Seahawk backfield suffers injuries, but otherwise he is not a strong play at this point.

I am not sure how Sidney Rice is feeling right now because he hasn't been on the field much. That's not to be unexpected for a No. 1 receiver, especially one with an injury history, but I guess we can just assume that when the season gets underway he will be ready to go.

A lot of people would probably dispute "No. 1" with Rice at this point because he only had 748 yards last year, but few players can do what Rice can do. He's the most athletic receiver I can recall seeing on this team in a long time. Will he get over 100 targets in this offense?

Then again, is Rice as athletic as Tate? People will also point to Tate's numbers and tell me that I'm crazy, but there is a reason some people think of him as a mini-Harvin -- this guy can be as hard to tackle as anyone else in the NFL sometimes. He also led the league in interceptions caught for touchdowns!

In a contract year, it will be interesting to see how Tate performs and how he is utilized in the offense, as well as how that role changes when Harvin returns. He can do a little bit of everything and he finally started to put it together last year. Again, how productive does that mean he can be in this offense?

I was in no way embarrassed about the amount of riches the Seahawks seemed to receive when they traded their first-round pick for Harvin. He is one of the best athletes in the NFL, one of the most exciting players to watch, one of the hardest players to tackle and one of the few MVP candidates who doesn't play quarterback.

And, apparently, only one step away from an injury that will probably sideline him for half the season.

On the bright side, Harvin will most likely return at some point this year, and the Seahawks didn't really "need" him all that much to begin with. When he does come back, it will be really weird to see him integrated into this offense and probably really hard for teams to know how to stop it.

I don't think I would use up a roster spot for him unless you've got a special place for players who are hurt. I have zero idea what to expect from him at this point.

Speaking of not knowing what to expect, I have tried to caution people away from expecting too much out of Kearse or Williams. Just because it has worked out well with guys like Doug Baldwin in the past, it doesn't mean that lightning will strike twice.

But this is Seattle and lightning strikes all the damn time.

Kearse caught a touchdown on Saturday and also returned a kickoff 107 yards for another. He has looked outstanding in training camp and the preseason and the University of Washington standout could be a rare player to graduate from the practice squad to playing a significant role on an actual NFL offense.

The injury to Harvin has opened the door for at least one more receiver to be kept on the roster and Kearse is all but guaranteed to do that.

The 6'5 Williams also looks like a solid bet to make it, having also played well (two catches for 45 yards, one TD) on Saturday and having a great offseason. Not so much for Harper.

The TCU grad looks like he's fallen to no better than sixth on the depth chart, meaning the Harvin injury could be his last saving grace. Though some might argue he's not even playing as well as Arceto Clark.

Baldwin fell off the map a bit last year, but once again made the roster and could be a sneaky deep sleeper.

I wasn't confident that Miller (foot) would be activated by now, but he's come off the PUP and is going to be ready for Week 1. Thank God, because Miller seemed to be the only thing that kept Seattle hanging around with Atlanta (eight catches, 142 yards, TD) in the playoffs, and he might be set play his biggest role with the team in 2013.

He might not approach really big numbers, but he seems like a good bet to improve from last year and catch a few touchdowns.

Willson's numbers at his Pro Day were so ridiculous that he absolutely had to get drafted, but it's an absolute mystery to know what to expect. Anthony McCoy going on IR means that Willson or possibly Sean McGrath will see significant snaps this year.

Even with Wilson, Lynch, and a healthy Rice, the breakout player for Seattle in fantasy last year might have been team defense. Seattle went from being pretty good in 2011 to damn-near elite in 2012.

All of those players return in 2013, and all Seattle did was add Michael Bennett (nine sacks with Tampa), Cliff Avril (9.5 sacks with Detroit) and Antoine Winfield.

Irvin will sit out the first four games of the year and Clemons is shooting for a return from a torn ACL, but otherwise this is the same defense as last year, but probably better. It's no worse than one of the top-5 team defenses in fantasy football.

I am still not sure how we got here, but I don't hate it.