The Browns have posted double-digit losses in nine of the last 10 seasons. Can a new head coach change that and will the new offensive regime produce any fantasy stars for your team?

Share All sharing options for: Cleveland Browns fantasy football draft preview: If a tree scores a touchdown in Cleveland ...

The more of a joke something becomes, the more I will root for the punch line to end. It's not that I necessarily take great pleasure in kicking someone that's down, it's only that I can relate to it. I am the joke.

I've spent my life rooting for teams like the Mariners, Seahawks, and Washington State Cougars. I've enjoyed many great personal follies, failures and embarrassments. I know what it is to be bad and so even if I'm just misery looking for company, maybe if I can see my fellow losers do well, there is hope for me.

This is an article about the Cleveland Browns.

There are different levels of "suck" for NFL franchises:

"Suck: The New Class" would include teams like the Raiders, Bills and Rams. These are the three worst franchises of the last decade and we immediately associate them with being terrible every year, even if Oakland and St. Louis went to Super Bowls in this century.

"Suck: The Classics" would include the Bucs (the Yucks), the Saints (the Ain't's) and the Seahawks (the Seachickens, which is by far the least clever.) The Bucs and Saints get passes for winning Super Bowls in this century, while the Seahawks are difficult to make fun of because they also appeared in a Super Bowl as recently as the 2005 season, and appear on the precipice of success for years to come. There's always the chance that success evaporates before they win a championship, though.

And then finally, there's just "Suck: Hall of Fame" for teams that exist on their own level of historical suckiness: the Lions, Cardinals, and, of course, the Cleveland Browns. These are the franchises that have almost always been bad and won't escape this stigma until they finally win a Super Bowl. As the Cardinals (and Seahawks) exhibited, coming close isn't good enough. (The Cards, Lions and Browns won't win a Super Bowl this year, but Seattle might. Stop calling me biased!) I am rooting for all of these franchises to end their reign of suck in a very similar way to how I'm rooting for the Seahawks to do the same.

Misery loves company, but it also adores seeing their company rise with them. I want to see Cleveland do well. I want to see them draft great players and I want to see them breed fantasy studs. In a recent draft, I saw Seattle backups get drafted. That won't be the case for many of the Browns actual starters, but maybe one day it could be.

Maybe it's starting right now. Let's take a closer look at the Browns and find out whether or not they're also on the rise. 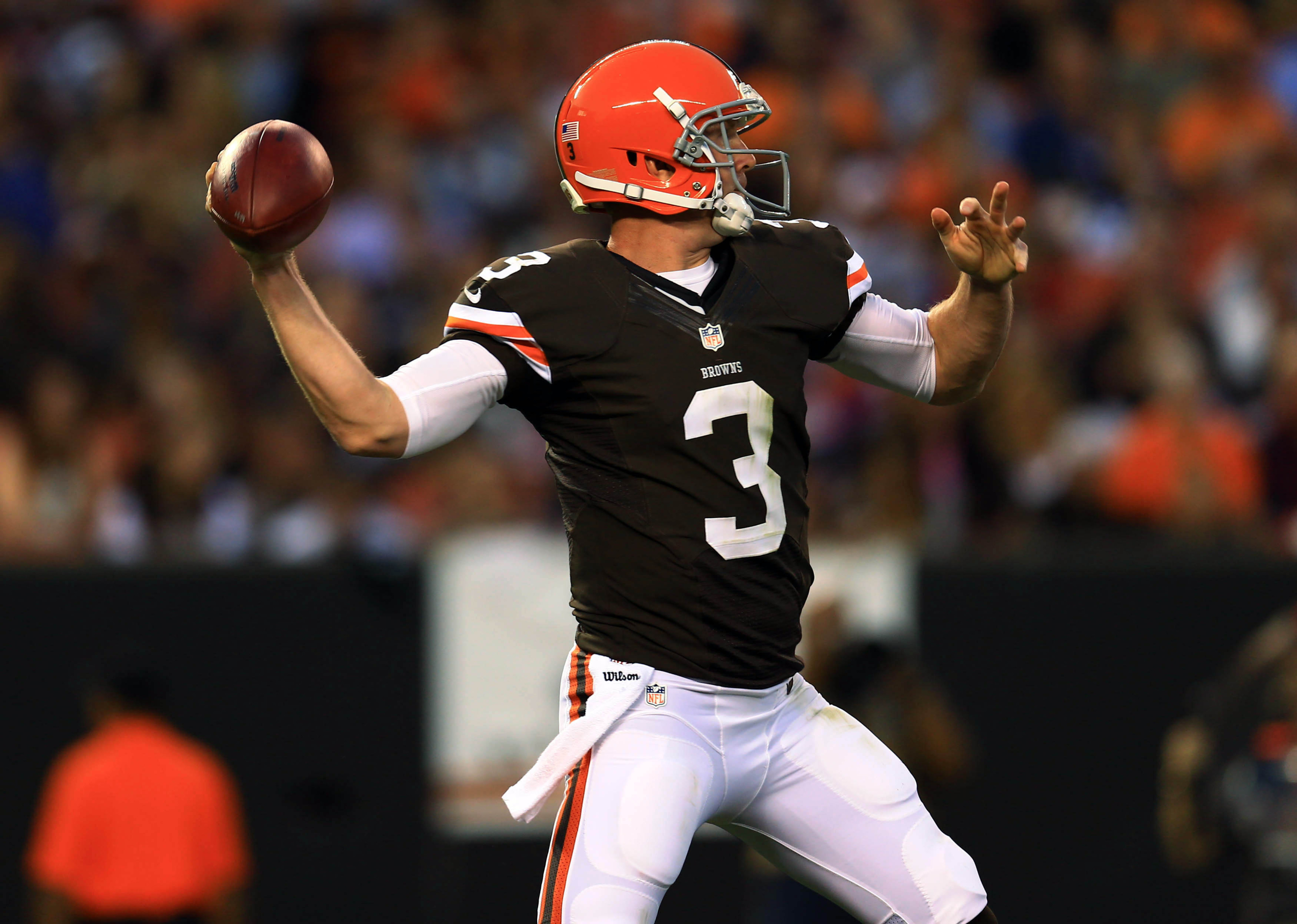 New head coach Rob Chudzinski had nothing to do with the drafting of Weeden and I'm not certain that he would have ever made that pick. The way that Seattle went about finding a franchise QB was by taking a lot of low-risk stabs at free agency (Tarvaris Jackson, Matt Flynn), trades (Charlie Whitehurst), and the draft (Russell Wilson) until they found their man. They never felt compelled to take a QB just because they were expected to; they only did it when they felt that they might have found the right guy for the job.

The Browns did not draft any quarterbacks this year and didn't even take a shot at it in undrafted free agency. Instead they signed a couple of low-key free agents that have shown potential in the past and opened a competition with Weeden. Last month, Weeden won that competition. Weeden was 8-of-12 for 117 yards and two touchdowns against the Lions in preseason Week 2.

Weeden is too old to have been drafted as a first-round pick and he was bad last season, but is he bad? I don't think so. The Browns didn't have a lot of talented receivers and obviously things did not click for him in that system. Can he do better under Chudzinski? I believe that he can, even if I don't believe they've upgraded the weapons all that much -- I think they'll have to throw it a lot.

There's also a greater-than-zero chance that Weeden plays himself out of the job. Campbell is the backup and Hoyer will likely be kept as a third QB. Campbell is not all that bad, having some success in Oakland and Washington, but last with the Bears he looked like a completely different player. He really was terrible.

Is that an aberration or did he really lose it? Hopefully for the Browns, they don't have to find out.

Widely regarded as one of the best under-25 running backs in the NFL, I have some serious concerns with Richardson:

He is constantly dealing with some sort of injury.

He plays for Cleveland.

He flat out wasn't that good last year.

The last one has to be the most concerning. Richardson had less than three yards-per-carry in seven of his 15 games last year. He didn't have a single game with more than six yards-per-carry. He's the focal point of an offense that could really use a No. 1 receiver, so a lot of his value could be tied to the success or failure of Josh Gordon at this point.

However, with that being said, Richardson had 11 touchdowns and 51 catches despite all of those issues last year. In a PPR league, he's even more valuable. If he get the same number of touches, but just upped it to a more respectable 4.5 yards-per-carry, Richardson would have ran for 1,201 yards. Offensive coordinator Norv Turner (and former assistant of his in San Diego, Chudzinski) oversaw another highly-touted and oft-injured disappointment: Ryan Mathews. Can they avoid that with Richardson?

None of these insurance options is very comforting.

The Browns didn't have many draft picks this year, in large part due to their efforts to upgrade their receiving corps. That includes using a 2012 second-round supplemental pick on Gordon. I'm not usually a big fan of using early supplemental picks, but really Cleveland had to take a chance here.

That risk immediately started to pay off.

Gordon had a three-game stretch in October where he caught seven passes for 240 yards and four touchdowns. He was slow to start the year and end the year, but in the middle he was a beast. In Cleveland. That's pretty impressive for anyone, let alone a rookie. Under the tutelage of Chudz and Turner, he could really be set to take off and he's one of the most hyped "breakout" players in fantasy football this year.

If the Browns are going to change the stigma in Cleveland, it has to start with players like Gordon.

Little was Gordon just before Gordon. A second-round pick in 2011 that had a good rookie season (61 catches, 709 yards), but failed to build on that. With the additions of Bess and Kellen Davis, he's going to lose targets if he doesn't perform better. Gordon had 8.47 yards per target, Little had 6.95 per target.

The other big draft expenditure was a third- and fourth-round pick on Bess. That's ... surprising.

Maybe Bess is a little underrated. Maybe he sets a good example for Gordon and Little. But he has 12 touchdowns in five seasons and 10.7 yards per catch. You couldn't find that in the third and fourth round?

Here are some other guys that play for the Browns. They hold no fantasy value

Cameron is like your high school crush. You don't love him, you love the idea of him.

2013 Prediction: Cameron could breakout at any time, but I'm not the one to spend a draft pick on him just yet. Let's say 40 catches and 450 yards with a touchdown or two.

The Browns can actually make a compelling argument that their defense isn't bad. It might, in fact, be pretty good after their offseason additions.

Cleveland finished 19th in scoring defense, ninth in turnovers forced, 17th in net yards-per-pass attempt allowed, 13th in yards per carry allowed, 11th in interceptions and recorded 37 sacks. What they added was OLB/DE Barkevious Mingo with the sixth overall pick, cornerback Leon McFadden in the third round, defensive lineman Desmond Bryant from the Raiders and outside linebacker Paul Kruger from the Ravens.

Combine those guys with cornerback Joe Haden, defensive end Jabaal Sheard, and a healthy Phil Taylor, and the Browns have got themselves a stew goin'.

Playing in the AFC could also help, but the biggest addition is defensive coordinator Ray Horton. Horton helped turn the Arizona Cardinals into one of the top defenses in the league last year and saw Daryl Washington and Patrick Peterson turn into stars. They could immediately become the sleeper defense in fantasy football this year thanks to all those additions. A good bet if you don't like drafting a defense until the last round.

Maybe, just maybe, a step toward leaving the Suck Hall of Fame.