With back-to-back playoff appearances for the first time since 1982, the Bengals are expected to make a deep playoff run this year. Will they be able to live up to the hype, and how many players can join A.J. Green as fantasy stars?

Earlier this preseason, I wrote this post predicting every game in the NFL this season. I forecasted that by midseason, the Jaguars would be relocated to the planet Mars and yet some people would still say that my craziest prediction was having the Bengals in the Super Bowl.

Maybe we don't get to Mars that fast, but I stand by my pick in the AFC. Cincinnati is for real. Don't you love it when a plan comes together?

In 2010, the Bengals went 4-12, but they did the most un-NFL thing I've ever heard of: They didn't fire Marvin Lewis. Instead, Cincinnati started firing the players. Carson Palmer was traded to the Oakland Raiders, Terrell Owens and Chad Johnson weren't retained despite productive seasons, and leading tackler Dhani Jones retired, as did safety Roy Williams. The team had some rebuilding to do, again, but this time the Bengals ended up looking like the smartest guys at the table.

Defensive tackle Geno Atkins, a fourth-round pick the year prior, but who played sparingly as a rookie, exploded into perhaps the best DT in the game over the last two years. In the 2011 draft, Cincinnati drafted Andy Dalton (who went to the Pro Bowl as a rookie), A.J. Green (now a two-time Pro Bowler), and guard Clint Boling (could be headed to Pro Bowl status). Those moves have resulted in back-to-back playoff appearances for the first time in 30 years.

Of course, the Bengals aren't perfect. They haven't won a playoff game since the 1990 season. They finished 12th in scoring offense and 22nd in total offense. They've played well, but they have not yet played dominantly. And all of this coming in a decidedly mediocre American Football Conference.

It's because of that mediocrity that I've predicted that Cincinnati will represent the conference in the Super Bowl, but will the Bengals take it to the next level this year and will anyone besides A.J. Green become elite? 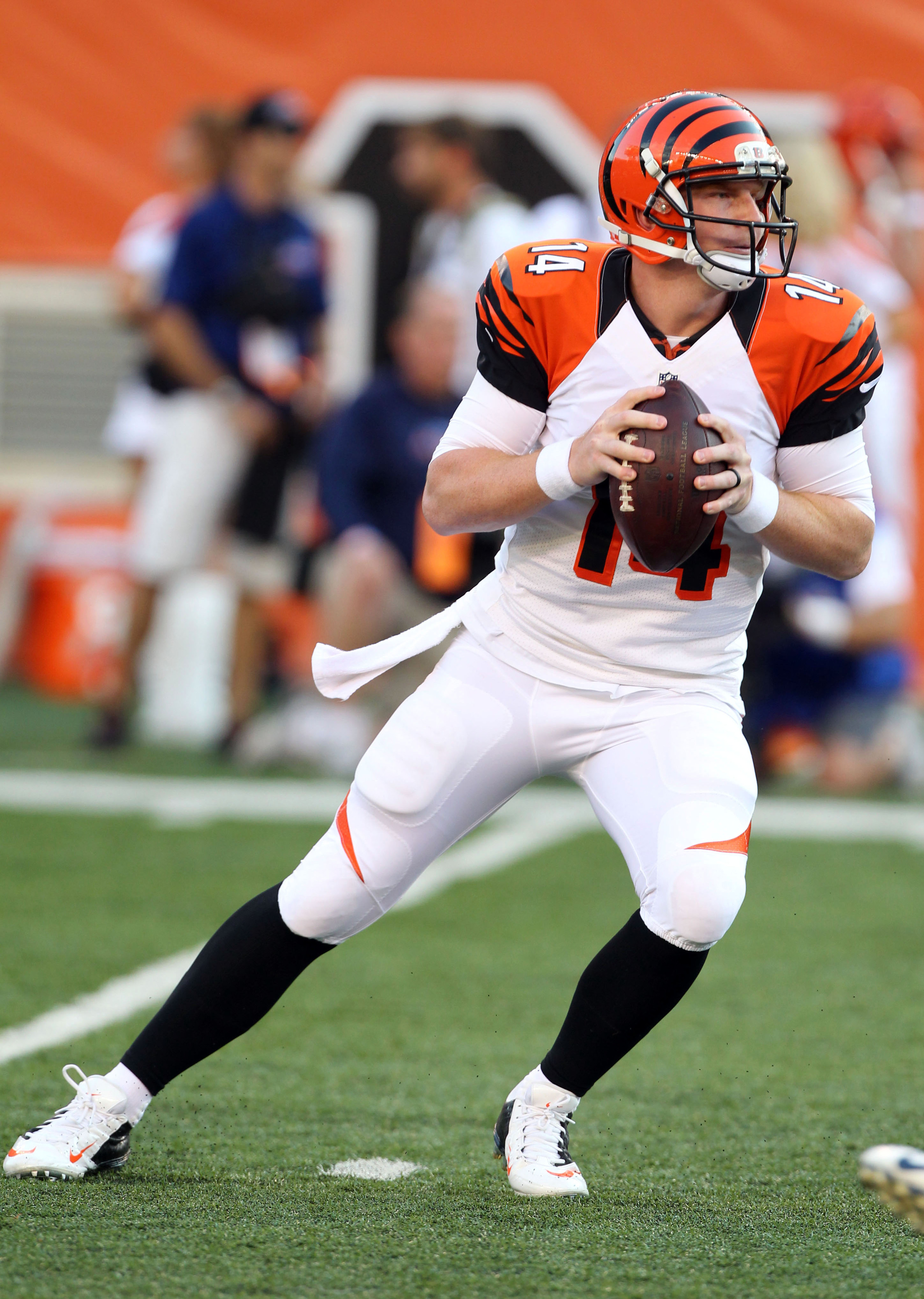 How many quarterbacks in NFL history have started all 32 possible games (of course, 16-game seasons don't go back to the start of the NFL, but do go back pretty far) in their first two years? Four.

I'm not 100 percent certain that Dalton will ever put up statistics that boggle the mind, but I do think he can have a very steady and consistent career and be an average (read: sixth-to-10th best) fantasy quarterback whose statistics will make the mind at least twitch a little.

I don't know why Johnson hasn't had much of an opportunity in the NFL, because every time I happen to see him play, he plays well. If forced into starting, Johnson would be very intriguing.

I don't want to say that Green-Ellis "can't catch a break" because the former undrafted free agent has spent five seasons in the NFL, but it doesn't appear that any team trusts him all that much. "The Law Firm," as he's come to be known, scored 24 touchdowns for the Patriots between 2010-2011 and was unceremoniously let go by the team. He signed with the Bengals and topped 1,000 yards last year, but still they drafted a rookie to replace him. And I understand why.

For as reliable as he might be, there's nothing really exciting about Green-Ellis. He did, however, have a five-game stretch last season when he topped 100 yards four times and scored three touchdowns. After that stretch he had a terrible game against the Steelers, rushing for 14 yards on 15 carries.

Green-Ellis isn't the future in Cincinnati and he might not even be the present.

Bernard and Green-Ellis should complement each other, but most people will come to see the rookie play, not The Law Firm. With Green-Ellis sitting out the preseason Week 2 game against the Titans, Bernard had seven carries for 37 yards and a touchdown. He's young, even for a rookie, and likely to be worked into a bigger role over the next couple of years.

Bernard is worth a flyer, and if asked to get 15-20 touches per game this year, he could end up paying off huge dividends. I gave Dalton fewer pass attempts because I think the Bengals will be able to run it more often with more leads this year.

These three were involved in perhaps the most heated roster battle in Cincinnati. Herron announced himself quite loudly last week with a nine-carry, 81-yard performance (including a 40-yarder) against the Titans. But Burkhead was a sixth-round pick this year and has gotten a lot of praise in camp, while Peerman is the veteran that has spent three years with the Bengals and signed a new two-year deal in March.

It's not likely that any of them will end up playing big roles in fantasy this year, but you never know. Herron seems to have the biggest upside in that respect, but preseason is still only that, preseason.

How high is the ceiling for A.J. Green? Can he one day be as productive as Calvin Johnson or Larry Fitzgerald? The funny thing is that at this point in his career, he's been more productive than almost any receiver, ever.

His 2,407 receiving yards through two seasons is more than anyone ever with the exception of five players:

Other than Groman, who had only 833 yards over the rest of his career, that's a pretty impressive list. Only Marques Colston (168 catches) has had more catches in his first two seasons than Green. There is no reason that Green can't be the most productive wide receiver in the NFL.

If I have any hesitations about projecting him for 1,800 yards or whatever, it's because I don't think the Bengals will need to throw it that much and I think that the other receiving options are improving. A team wants to have Green around because of how handy he is to make the impossible look possible, but you only want to have him when necessary. It's even better when he's left to be forgotten until that one big moment.

Sanu, say me, say it forever, that's the way it should be.

Speaking of injuries, Sanu hit IR last season with a broken foot. He wasn't very productive in his eight games, but he was still one of my favorite players available in the 2012 draft and he had 36 yards and a touchdown against the Titans last week.

He will be the No. 2 receiver and I believe he can be productive. I still wouldn't draft him.

Hawkins is currently injured and going on injured reserve with return designation.

Hawkins' injury should open the door for one more receiver to make the opening day roster, but none of these guys has a high probability of bolstering your fantasy team this year. Sanzenbacher might have the highest upside based on his punt-returning ability.

Anyone outside of Cincinnati noticing that Gresham has made two straight Pro Bowls? Because I didn't. Quietly, Gresham has already become the big threat opposite of Green, and he could have a couple of years in his career where he puts up huge numbers. You'd love to see more touchdowns and there's always the chance that it happens.

Gresham would rank a solid starting tight end in fantasy leagues, but I'd caution that it's possible 737 yards is his peak production.

Showing that they're not adverse to following trends, the Bengals used their first-round pick on another tight end, giving them dual receiving threats at the position. Cincy Jungle broke down Eifert's first preseason game, and in his second preseason game he totaled 32 yards including a 25-yarder.

I wouldn't draft Eifert, but in a year or two he could actually be more productive in the passing game than even Gresham.

If the Bengals are going to be good this year because of their offense, then they'll be great due to their defense.

After a 3-5 start to the season last year, Cincinnati really started to chomp down on the defensive side of the ball. They allowed an average of only 12.75 points-per-game in their final eight contests and went 7-1 over that stretch. They forced only 11 turnovers in the first half of the year and 19 turnovers in the second. Football Outsiders ranked the Bengals as the third-best weighted defense in the NFL, meaning that as the season went on they just kept getting better and better. Only the Bears and Broncos were better in that respect.

But only Atkins made the Pro Bowl for the defense. That could change this year.

Second-year linebacker Vontaze Burfict fell out of the draft because of character concerns, but led the team in total tackles as a rookie with 127. He could be a good pick in IDP leagues, though he doesn't do much more than tackle. Ray Maualuga enters his fifth season and had a career-high 122 tackles in 2012.

On the defensive line it all starts with Atkins and his 12.5 sacks a year ago. Perhaps only J.J. Watt was more impressive as a D-lineman last year. Returning is defensive end Michael Johnson (11.5 sacks) and joining is Margus Hunt, a massive 6'8 rookie that ran a 4.53 40-yard dash. Hunt could be the most impressive athletic specimen in the NFL right now. Carlos Dunlap (six sacks) looks to get double-digit sacks for the first time in his career, but he will have a lot of competition in that regard from his teammates.

As a team, the Bengals could perhaps become the best option in fantasy, especially playing in the AFC. In that conference, they have a real shot at rising to the top and going all the way.