Baltimore did not look like contenders when it headed into the playoffs, but then the Ravens won the Super Bowl. Could the same be said about the receivers and tight ends as they enter the regular season? And will somebody step up?

Some Browns fans were mad at me for my fantasy preview of their team. I simply mentioned that historically the Browns aren't very good, or at least the perception for most fans is that they "suck." It was my fault for not mentioning that they had a few winning seasons in the '80s and '60s, and instead focused too much on the fact that they've never been to the Super Bowl, let alone won one.

Forgive me for not advertising to fantasy football folks that Cleveland was successful 50 years before the Internet blew up!

I also didn't mention the fact that the original Cleveland Browns moved to Baltimore in 1996 and have now won two Super Bowls as the Ravens. That would have been rubbing it in too much. I'm guessing most of you reading this are Ravens fans, and you're fine with all of this. As you should be. And probably thanking your lucky stars.

Baltimore lost four of its last five games in the regular season but since the team plays in the AFC and started 9-2, it was able to get into the playoffs, at which point it got hot. The Ravens beat the Colts, Broncos, Patriots and 49ers on their way to their second Super Bowl title but whereas the 2000 team was built on defense, the 2012 team was mostly led by an offense that scored an average of 31 points per game in the playoffs. Can the Ravens continue to put up points after the losses of several key players? Do they have many fantasy studs this year? Did Browns fans even realize that I said I was rooting for their team because I know what it's like to root for a loser??

Here's a closer look at a winner. The Ravens: 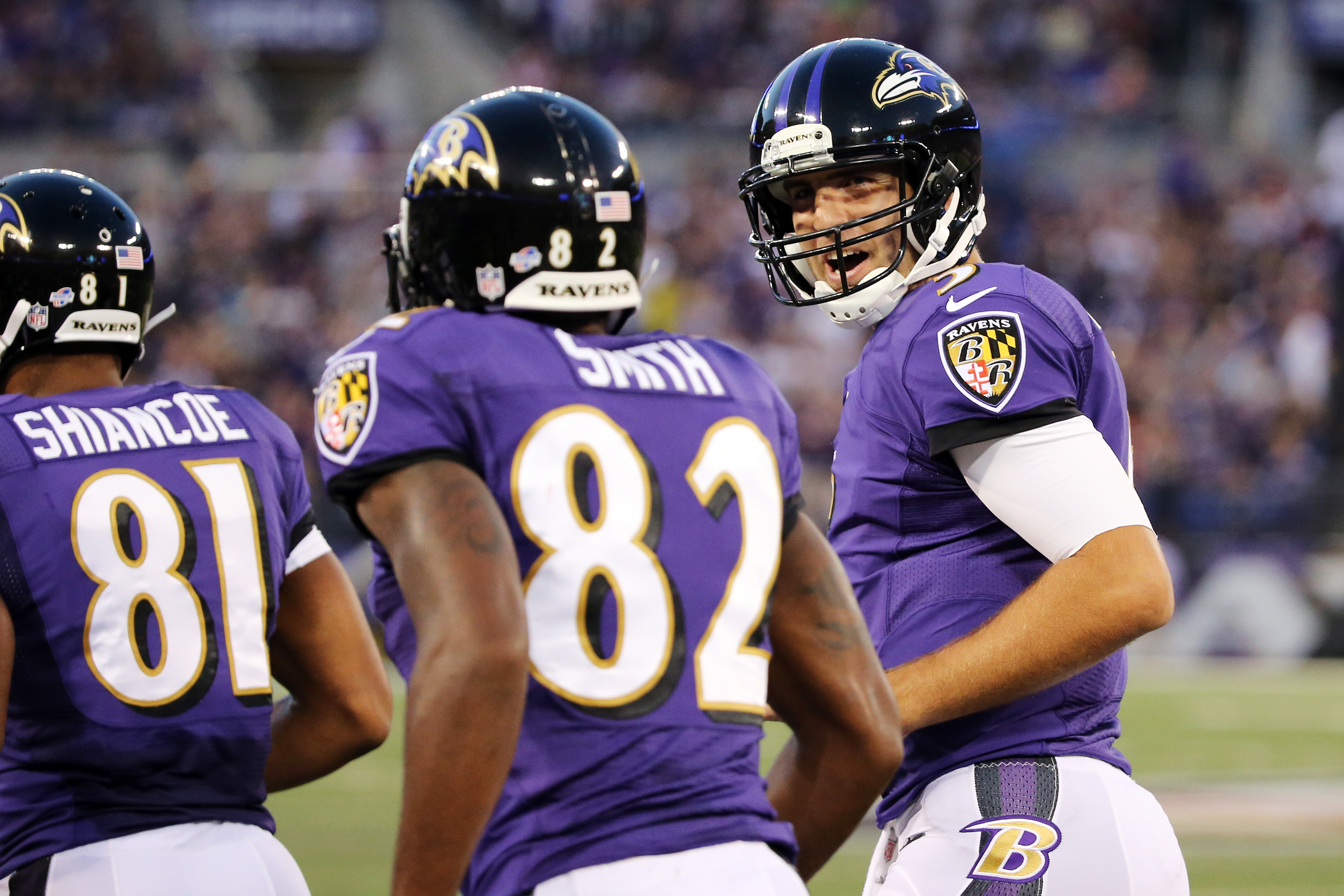 How much would Flacco have been paid if that pass against the Broncos was incomplete? Luckily for him, he will never have to find out. Flacco's best statistical season was actually back in 2010 when he completed 62.6 percent of his passes for 3,622 yards, 25 touchdowns, 10 interceptions and 7.4 yards per attempt, but he wasn't far off from that last season.

However, last season he had Anquan Boldin and Dennis Pitta. He doesn't anymore. And the replacements have not looked sharp.

If Baltimore fans want to call Flacco elite, that doesn't bother me. He's won nine playoff games in five seasons. How many teams have won nine playoff games ever? But statistically he is average. He was 17th in Football Outsiders' DYAR stat and there's little reason to think that one of the most consistent quarterbacks of the last five years is all of a sudden going to blow up. Not without Boldin and Pitta. Then again, I still can't believe they're the defending champs, so anything could happen.

I do find Taylor to be a fascinating quarterback prospect. He's had an excellent preseason, completing 58.3 percent of his passes for 263 yards, 7.3 yards per attempt, four touchdowns and two interceptions with 66 rushing yards. Of course, those numbers aren't perfect and this is against second- and third-string defenses, but he's still an interesting athlete.

With the number one pick in a recent draft, I did not select Rice. Actually, I never really considered him out of my top four options, but in reality he is one of the safest picks in fantasy football. Rice hasn't missed a game since his rookie season in 2008. Since then, he's rushed for an average of 1,266 yards and eight touchdowns per season while averaging 70 catches and 610 more yards. Rice also led the league in total yards in 2011 with 2,068 of them.

Wait, why didn't I consider him for the number one pick, again?

In a PPR league, Rice could arguably be more valuable than someone like Marshawn Lynch and I could see him outdoing Adrian Peterson. In my draft I went with Doug Martin because I think he has a high floor and a high ceiling; plus, I like the fact that he didn't play in the playoffs last season unlike the other three (including Arian Foster). However, Rice got as much extra time as any running back due to that whole Super Bowl thing.

Rice's career highs just aren't as high as most elite players (in terms of rushing yards and touchdowns) but that could change at any point. He's just a safe bet to be very, very good. If there's any real concern, it's that the offense has looked very, very bad in the preseason and blocking for Rice led to just 11 carries for 17 yards in the first two exhibition games. At least he'll always have the receiving part of his game.

Another thing that could keep Rice from exploding this season is the presence of Pierce, one of the best backup running backs in the league last year. Though they are different types of running backs, Pierce is capable of carrying a full workload even though he couldn't be the kind of all-around back that Rice is.

He carried the ball 36 times in the last two games of the regular season and gained 212 yards. He carried it 13 times against the Colts in the playoffs and gained 103. If you draft Rice, you gotta get Pierce, too. You can't spell Rice without ... Pierce. (Well, most of the letters anyway.)

The only good receiver in Baltimore that we know of caught just 45 percent of his targets last season. Yikes. You might remember that Smith blew up last season, but did he really?

His 855 yards were almost exactly the same as his rookie year, as were his 49 catches. He had two games over 100 yards and in the playoffs he had just 233 yards in four games. The thing we will always remember is his inspiring two-touchdown performance after he learned his brother had died. I root for Torrey Smith, I like Torrey Smith, but what exactly are we talking about here as a fantasy player?

He's been in the league for two years and he's always had Boldin standing on the opposite side of the field from him. I worry about what he looks like when there is (almost) literally nobody else there to catch passes. Is Deonte Thompson or Jacoby Jones the answer to fill in for Boldin? I'm just not seeing it. So now you can focus more of your attention on the guy who caught 45 percent of his targets. At least he should get more targets.

While we are at it, let's just go ahead and talk about the entire pile rather than try to predict yardage totals for singular players when none of them have stepped up. David Reed already lost out but not because any of these guys have blossomed. Thus far, they have (what's the opposite of blossoming?) ummm ... wilted. Yeah, that's it.

Jones has been in the league for six years and never developed as a reliable wide receiver, even when he had opportunities to do so in Houston. Thompson has missed time in the preseason with a foot injury, when what he needs to be doing is developing and getting reps. Stokley has been with the team for like 10 days and was probably in the league when Ray Lewis won his first Super Bowl.

I can't un-recommend enough any of these players. Perhaps one of them surprises but don't waste draft picks based simply on opportunity. The guy also has to show he can play and none of these receivers inspire confidence.

Meanwhile, Dickson is recovering from a hamstring injury and hopes to return by Week 1. For Baltimore's sake, he better. The team could really use him right now.

Dickson's production last year was disappointing, but he did catch 64 percent of his targets. If he ups that to 80 targets this year (which seems plausible), he would be up to 51 catches and probably around 500 yards. That's basically what he did in 2011. That's not huge in fantasy by any means, but for a tight end he's got potential to do much more considering what else is around him (or lack of around him) and that he's not competing against Pitta for targets.

Same as what they're dealing with in the receiving unit: There's not much to see here behind the starter. The Ravens brought in Visanthe Shiancoe and Matt Furstenburg as well, but neither made the cut. Clark is a veteran who will try to help a defending champion that looks a little weak right now after so much offseason change.

The Ravens defense wasn't quite as stout as we remembered it for all those years under Lewis, twice allowing over 30 points in the playoffs and finishing just 17th in yards allowed. Again, there's a lot of change going on here.

Arthur Brown, Elvis Dumervil, Matt Elam, Michael Huff -- these guys are here. The weird thing is that despite how well regarded some of those above players are, the new guys might be better at this stage of their careers.

Defensive tackle Arthur Jones has looked very good in the preseason and many of the best players on this defense are still young, including linebacker Courtney Upshaw and the rookies Brown, Elam, third-round pick Brandon Williams and fourth-round pick John Simon.

The addition of Dumervil should fill in nicely for the loss of Kruger in terms of sacks. Brown and Josh Bynes can fill in for the loss of Lewis. Elam and Huff can replace Reed and Pollard just fine. It will also make a big difference when Lardarius Webb returns. The Ravens shouldn't have a drop off at all, but the only concern there is that they weren't all that great last season.

The potential is there for a top-five fantasy defense, but I'd be more comfortable letting them pass by and waiting to see how the Ravens look in the regular season.

Though I'm sure they'd rather repeat how they played in the postseason.