The Steelers have lost players to free agency and injury and this week scrambled to find another running back on the market. After over four decades of success, is Pittsburgh about to enter the dark ages again or will a few skill players step up and produce?

The Steelers have had three coaches in the last 44 years. Let that sink in for a minute when you're considering that this is a league where oftentimes a coach won't even get more than a season to prove himself. While Browns fans were (understandably) mad at me for calling them a "sucky" franchise, it seems that their division cohorts have sort have had the opposite effect.

Only eight more appearances and six more wins and the Browns will catch up! This might be the time to do it.

The Steelers 8-8 record last season was their worst since going 6-10 in 2003, and then they drafted Ben Roethlisberger. What did Pittsburgh do this time to improve themselves over the offseason? Well, it doesn't look like they did much unless you consider it addition by subtraction.

Rashard Mendenhall, Mike Wallace, and James Harrison are gone. The "Over 30 Club" includes Roethlisberger, Heath Miller, Larry Foote, Ryan Clark, Brett Keisel, Troy Polamalu, and Ike Taylor. Injuries have already begun to take its toll on the tight end position, where Miller (ACL) and Matt Spaeth (Lisfranc) are going to miss at least the start of the regular season. Even the return of Plaxico Burress ended before it began.

How will the Steelers rebound? I don't know, but they somehow always seem to do it. In the meantime... 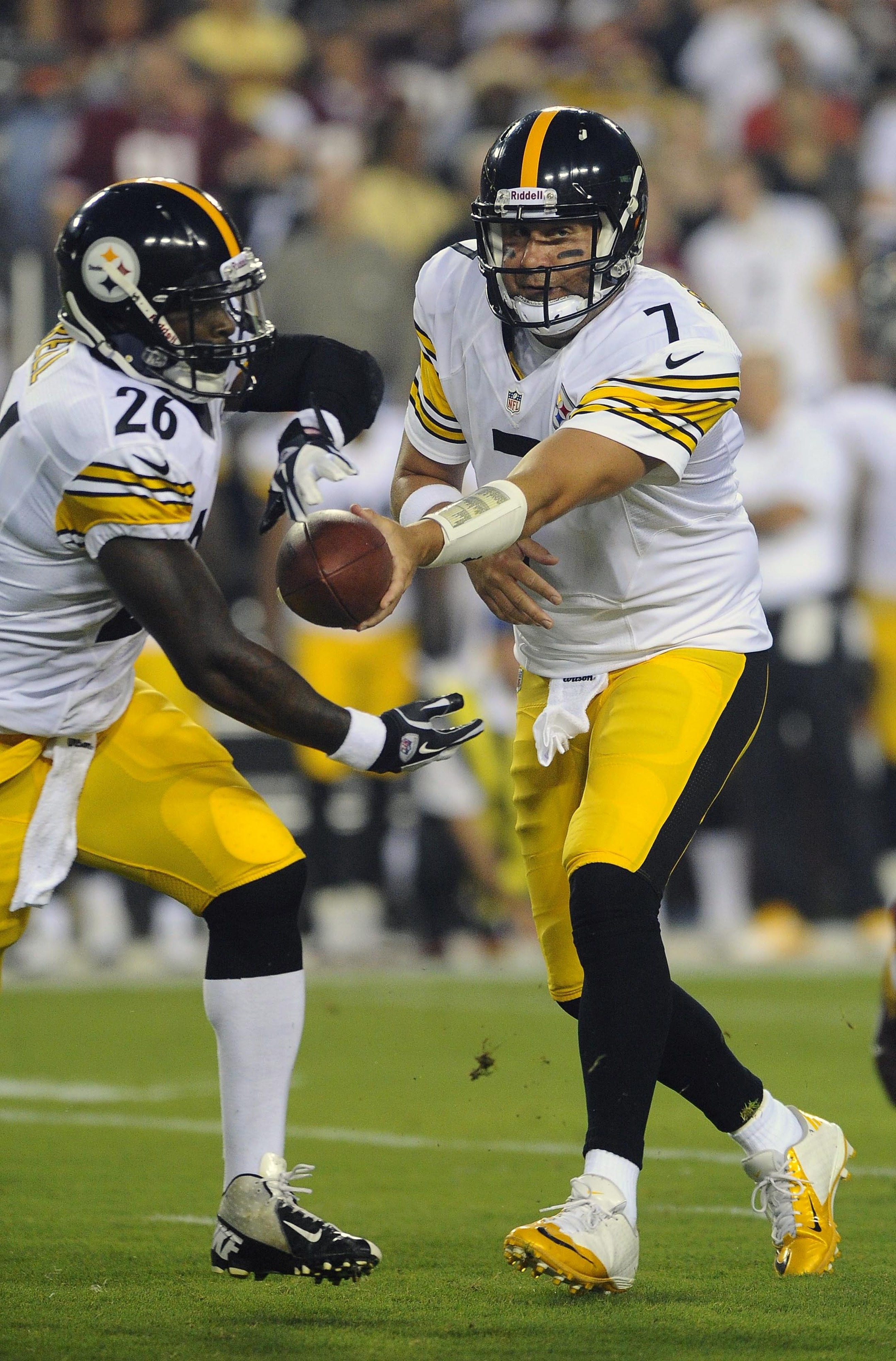 Roethlisberger's career has been a bit of a mystery of mostly-good statistical play mixed in with some fairly awful seasons. Pittsburgh went 15-1 when he was a rookie, won the Super Bowl in his second year, led the league in interceptions in his third, made his first Pro Bowl in his fourth, posted a QB rating of 80.1 in his fifth and then a rating of 100.5 in his sixth.

In nine seasons, he has thrown over 20 touchdown passes just four times and over 30 just once. He has played a full season only once. He's somewhat all over the place but somehow consistently good enough to almost always get the job done and sometimes brilliant. Even in his last really poor season (2008: 17 TD, 15 INT, 59.9% completions) the Steelers won the Super Bowl.

Because of course they did.

Now I look at the Steelers and I see Wallace is gone, Miller won't be around for probably a month and even when he returns how will he look, Mendenhall is gone, Le'Veon Bell already suffered a minor injury, and Roethlisberger's second-best receiving option might be a third-round rookie.

If there was ever a time to draft Roethlisberger in your fantasy league, this would not be it (Even if somehow he manages to make it work).

He's never missed a whole year like Brady or Manning, but he rarely ever plays a whole year. Reothlisberger might be the best guarantee in football to miss exactly one game. At one point during his college career, Jones was seen as a first-round draft pick, but he's fallen kinda far from that.

The Steelers picked him in the fourth and he's been battling John Parker Wilson for the number three job. If Roethlisberger misses a game, there's not a whole lot to see here. Then again, at least it's not Charlie Batch (Who they most certainly will sign in Week 4).

It's difficult to project Bell's numbers this year because I could not feel comfortable saying how much time he will miss due to his foot injury. Reports have said it could be 6-8 weeks, but even if that were true, we've seen players with foot injuries miss at least twice as much time as what they're expected to. Then there have been other reports that have said it's "not that bad" and maybe it's only a mild sprain.

How could I know what Bell's future holds when I'm not even his doctor? I was fired weeks ago for malpractice.

I'm not going to predict numbers for any backs because it's one of the murkiest situations in the preseason. The addition of Felix Jones and departure of Jonathan Dwyer only complicates matters, but also makes me think that Pittsburgh knows that Bell will be out for awhile.

I wouldn't draft him unless he falls a significant amount.

It seems like I waited exactly the right amount of time to post this article. The Steelers have just traded linebacker Adrian Robinson to the Eagles for Jones, which turns out wasn't a good endorsement for Dwyer and the rest of the backs nor is it actually a very good endorsement for Jones.

Drafted to be a home run hitter, Jones has been bunting since 2010 when he was given an opportunity in Dallas to be "the man." After rushing for 8.9 yards per carry on 30 attempts as a rookie and 5.9 yards per carry in his second season, he's completely disappeared. Jones scored only two touchdowns in a full season in 2010, one touchdown in 2011, and then just 3.6 yards per carry last year -- though he did score five total touchdowns.

The Cowboys let him walk, the Eagles signed him, the Eagles traded him away. It seems like there is only one true back in Pittsburgh and his name is Bell.

An older version of inconsistency.

He was doing so well that the Steelers added Felix Jones.

I was surprised to find out that Brown didn't have 1,500 yards last year. Not even close. It just feels like every time he makes a catch it goes for at least 60 yards and that he does that about twice per game, but he did miss three games last year with a high ankle sprain. Still, he wouldn't have come close to a truly dominating season if he hadn't missed those games.

Brown had just 60.5 yards per game and has scored just seven touchdowns in the last two years since blowing up on the scene in 2011. Now every article about Brown is whether or not he's ready to step up and be the number one receiver without Wallace around.

Does he really even have a choice? Who else is going to do it?

I'd be concerned about the fact that Brown did not top 100 yards in any game last season. I'd be concerned that there might not be another threat in the passing (or running) game. On the other hand, his 106 targets could skyrocket to 180 targets or so, and then almost by default he'd get a lot of yards and catches. His 63 percent catch rate is very encouraging.

I think that there's probably a fair middle ground between what concerns me and what excites me.

Can you believe that Sanders had more Defense-adjusted Yards Above Replacement than both Brown and Wallace last year? He was a third-round pick three years ago, he was somewhat productive last year, but he's only 5'11 and probably his ceiling isn't the same as those other two guys.

With the addition of Wheaton, I don't know if Sanders can really reach a high fantasy level of production but that doesn't mean he doesn't have value. It's just that fantasy only cares about actual yards.

Wheaton, also short in stature, has been impressive thus far. He hauled in a 45-yard pass Monday night against the Redskins, can we expect more of the same during the season? There's probably a limit to what he can do this year, and I rarely bet on rookie receivers.

The transition to the pro level often just proves too difficult for wide receivers.

There's likely not much to see after the top three, either.

Tight ends seem to have it especially tough right now, with Spaeth, Miller, Dennis Pitta, and Anthony McCoy being just a few names off the top of my head that are hurt right now. Of course, Miller's injury was last year but ACL injuries aren't going to disappear overnight. Don't listen to what Adrian Peterson will tell you.

Miller is worth drafting as a second tight end because he should return eventually and he was really, really, really good last year. With the loss of some big name tight ends already over the offseason in the NFL, the position's scarcity is becoming real again and you'll want a good one.

Paulson was a seventh round pick out of Oregon in 2012 and might be a very deep sleeper. Coma-status.

It could be because they finished 25th in turnovers forced, and that's only because they forced seven in the final two games of the year.

There were only three interceptions by Pittsburgh cornerbacks and they scored only one defensive touchdown. The Steelers have had a top ten total defense in thirteen straight years, but in fantasy football we really only care about points allowed (check), turnovers (no check), touchdowns (no), and sacks (meh) Lawrence Timmons and Harrison each led the team with six sacks apiece.

Rookie first round pick Jarvis Jones looks like a good one but is that enough? And isn't fair to have concern about a D where you've got so many players over 30, with Keisel at 35, Taylor at 33, Polamalu at 32, Foote at 33? Yes, it's fair.

I'm sure they'll still be a top 10 defense, but in fantasy football you'll want to see a whole lot more turnovers and that's going to depend a lot on the production of Jones and Polamalu I believe. I'd take the Steelers if I waited to draft a defense until the end, but I wouldn't jump on them just because they were first in total defense last year.

(And then the Steelers go out and win the Super Bowl, because of course they do.)