Dallas Cowboys fantasy football draft preview: Maybe being America's team is too much of a distraction

Is the pressure of playing "for" an entire country the reason that Dallas has been such a disappointment this century?Despite a great first-string unit, just one major injury could have the Cowboys headed to the top of the 2014 draft.

Share All sharing options for: Dallas Cowboys fantasy football draft preview: Maybe being America's team is too much of a distraction

I haven't made any friends in Dallas during the offseason, I know this. In a series of un-Power Rankings, which starts at the bottom and works it's way down to the best teams in the NFL, I recently suggested that the Cowboys would perhaps be the surprise of the season.

And not in a good way.

I ranked the Cowboys in the "top 10" of the list, which means that I think they will finish with a top-10 draft choice. How could I be so stupid and so delusional as to overlook a team with so many talented players? With one of the highest-paid quarterbacks, a talented running back, three excellent receiving options, and a defense with some talented players and a new defensive coordinator?

I would start with the fact that the Cowboys have been talented for a while and still haven't had very much success in this century. I think it's possible that sometimes a franchise becomes bigger than the team and perhaps that can cause inherent distractions in the locker room on a daily basis.

"I want to play for Dallas!"

"Well too bad, because you're on the Cowboys. That mean's that you play for America's team."

Maybe it's time for the Cowboys to get back to their roots. Dallas was so good under Troy Aikman, Emmitt Smith and Michael Irvin (those three led the team in passing, rushing and receiving, respectively, for eight straight years and together won three Super Bowls) in the mid-90s that anything less than greatness is unacceptable. That's what every coach and quarterback for Dallas has heard for the last 15 years, but thus far none of them have been good enough.

The Cowboys have only won one playoff game since 1996. Tony Romo is a better statistical quarterback than Aikman, but Dallas fans don't want to hear about statistics. They want wins. And who can blame them? When you've been that "great" in the past, it's not OK to just be "good" now.

Maybe one disaster season wouldn't be so bad for this team. With the 2014 draft class looking like one of the best of the last 10 years, it could be a good opportunity to go 4-12, pick up Jadeveon Clowney, and finally go back to being Dallas' team.

Or, I could be very wrong, because now I'm going to tell you about a bunch of players who will be pretty good for your fantasy league. 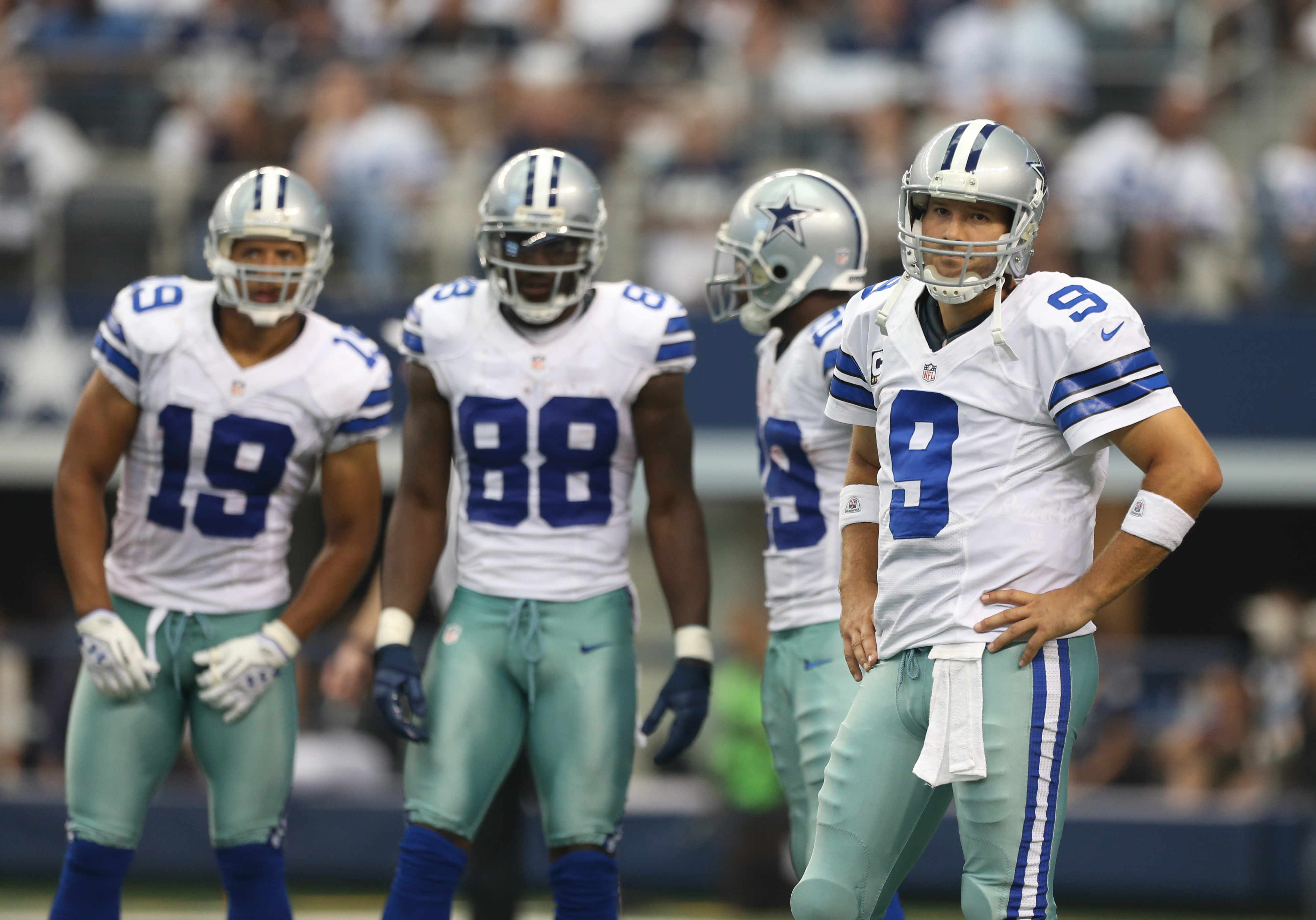 Even though Romo threw for nearly 5,000 yards last year, it took him 648 attempts to get there. That's almost 100 more attempts than he has ever had in a season and, of course, it was due to the fact that their starting running back got hurt, their backups were not good and Dallas was involved in a lot of close games. Will he have fewer attempts this year and could that actually be a good thing?

If Murray stays healthy all year, Romo should revert back to 550 attempts (his previous career-high) at most. In 2011 with only 522 attempts, he threw for three more touchdowns and nine fewer interceptions. Yards are nice, but touchdowns and non-interceptions are nicer, depending on your league.

Believe it or not, all three of his big options last year played 16 games. Another season of that and a full season of Murray should make a world of difference. I don't expect him to throw 19 picks again.

If anything happens to Romo, I think 4-12 might be out of reach for Dallas. Not sure how they'd get up to four wins with Kyle Orton.

If there is any player that is capable of being the most valuable running back in fantasy football this season, but isn't being considered for the No. 1 pick, it could be Murray. Of course, I'm repeating this tune from last year.

I think I probably projected Murray for at least 1,500 yards a year ago and he was perhaps my favorite running back in the league. As a rookie, Murray ran for 897 yards even though he didn't really get started until Week 6. That's when he put up 253 of them against the Rams. In Week 1 of last season, he had 131 yards on 20 carries, but that was his only 100-yard game of the year.

Murray had 14 carries for 93 yards in Week 5, but didn't play again until Week 13 and really injuries have always been a concern with him. However, it doesn't mean that they always have to be. Which running backs have escaped an injury tag? Not Adrian Peterson. Not Priest Holmes. Not Jamaal Charles. Not Willis McGahee. Not Frank Gore.

At this point it's just a part of the game. But all of those players have had plenty of healthy years, too.

He's so talented that you just hope he can start to string together some seasons where he doesn't wind up on the injury report every week and plays all 16 games. The Cowboys offensive line looks like kind of a mess right now and there's been a lot of shuffling during training camp, plus a significant lack of depth, but there's no reason to think that Murray can't be a solid RB1. He's already shown that he is.

The reoccurring theme in why I really don't like Dallas this year: Depth. Or lack thereof.

The Cowboys "depth perception" is the same as One-eyed Willie. Despite being burned by players like Felix Jones last year when Murray got hurt, Dallas used their first-round pick on center Travis Frederick -- and that's after they traded down -- despite a player like Eddie Lacy sitting there. Not that you should just draft for need, but ... Dallas does need some things!

Dunbar, Randle, and Tanner don't appear to be full-time NFL running backs. To be fair, Murray came out of nowhere himself, but another recurring theme might be that Dallas keeps expecting things to reoccur. Will Tanney be Romo? Will Randle be Murray?

The answer is usually no. If anything happens to Murray, again, there's that 4-12 prediction.

For some reason I felt the inclination to start this paragraph with "Finally it happened ..." based on the notion that after a disappointing start to his career, Dez Bryant finally exploded in 2012. Why would I think that?

Injuries set him back as a rookie and he had 561 yards with six touchdowns. A little bit of inconsistency and some injuries held him to "only" 928 yards and nine touchdowns during his second season. Then last year he "went off" for almost 1,400 yards, almost 100 catches and an impressive 12 touchdowns.

Bryant hasn't been bad and he's only been in the league for three years, though it feels like he's been at it for much longer. I don't think anything is going to hold him back from a very productive, very well-regarded career.

But if anything happens to Bryant ...

I guess you could also argue that there was a time that Austin had 81 catches for 1,320 yards and 11 touchdowns and that was four years ago. He's been productive since then when healthy, but he hasn't been nearly that productive.

Maybe I am wrong about this, but I assume people draft Austin thinking they're going to get 90 catches and 1,200 yards. That just doesn't seem realistic, even if it's possible -- it's not probable.

It is sometimes impossible to know what to expect from rookies based on the fact that it is expected that their teammates and coaches are usually going to say positive things about them. The easier ones to notice are the guys like Kenbrell Thompkins in New England because he's blowing up right now.

It's harder to know what to expect when you're playing for a team that already has two good receivers and you're likely going to be brought along in a smaller role for the time being and not putting up ridiculous preseason stats. The stats might not mean a whole lot, but a lack of production isn't good either -- nor is a story about your "busted route."

Williams doesn't have a hold of anything right now and I wouldn't try to project his numbers and wouldn't recommend drafting him. He'd be available on the waiver wire if he ends up starting during the year due to injury.

Someone like Beasley or Harris might be the starter in the slot and then who knows. Harris might have had a strong preseason, but Beasley got some rave reviews in training camp.

Witten said he hopes to be used in the red zone more often this year. That would be cool since he caught 110 passes last year and only 2.7 percent of them went for touchdowns. Tony Gonzalez is 37 and still going and that makes Witten's 31 years of age look pretty good. He's not old. Witten is still one of the best tight ends in football and one of the most reliable, too.

Witten is so young in fact that you don't have to start wondering whether or not Escobar will unseat him anytime soon. This is the way of the new NFL. If you don't have two tight ends, you don't have nothing. If Witten misses a game for the first time since the AFL-NFL merger, then Escobar makes a hell of a good sleeper pick. Out of all the depth concerns, this is the one that is least ... concerning.

Remember that guy that is not Rex Ryan and is also not the head coach of the Cowboys? Well, he's gone.

In comes Monte Kiffin after some failures at USC under the tutelage of his own son and he's changing up the defense considerably. That's probably because the Dallas defense was pretty bad last year. The Cowboys finished 30th in Football Outsider's Weighted DVOA last season (weighted based on how they did as the season wore on) meaning that by December the defense was playing worse than teams like the Saints and Colts.

That's bad ... and it's really difficult to know if it's going to be much better. The biggest differences really are Kiffin and the return of linebacker Sean Lee. That's pretty much it.

Now, a new defensive coordinator could make a world of difference, but whether or not Kiffin's "Tampa 2" defense is still effective remains to be seen. Or even whether or not the Cowboys have the talent at safety to run it properly. The Bucs defense was legendary under Kiffin in 2002, but it had to be perfect for Tampa to win a Super Bowl. Tampa also had several Hall of Fame players on defense.

The Cowboys do not.

Dallas has DeMarcus Ware, Lee, Anthony Spencer, and Morris Claiborne. Quick, name some other defensive players for the Cowboys (Not you, Dallas fans, that's cheating).

Overall, they had only seven interceptions, finished 28th in turnovers forced, and 24th in points allowed. There is not a single reason to draft the Dallas Team Defense this year, but they have a couple of good IDP selections, and here's hoping that a change in scheme doesn't change what Ware can do and how well he can produce.

If I'm wrong about Dallas then I don't think the defense will be what's saving them. It'll have to be an elite offense. They have the talent to pull that off, but if any one of their elite starters goes down, it's going to get ugly. So ugly that America will have no choice but to turn their backs, and their eyes, away from "their team."