Washington Redskins Fantasy Football Preview: Are there any players worth drafting outside of the big two?

The Redskins paid a high price for RGIII and seemingly have missed out on the opportunity to fill other needs. Has it cost them too much and are any players outside of Griffin and Morris going to have productive seasons?

Share All sharing options for: Washington Redskins Fantasy Football Preview: Are there any players worth drafting outside of the big two?

Two years ago, I was befuddled by the fact that the Redskins were actually having a quarterback competition between Rex Grossman and John Beck. As if having upside in the NFL draft 5-10 years ago still means something today. Grossman had started 34 games in eight seasons and Beck had started four in four. Two QBs who were not only not young, they were a double-threat of also not being any good.

Oh how quickly one draft can change you.

One year ago, the Redskins did not go into camp with a quarterback competition. Washington would be starting Robert Griffin III, the player that cost them three first-round picks and a second-round pick, and he would be backed up by Kirk Cousins, a fourth-round pick with notable upside. This was the Superman Bizarro world version of not only the 2011 Redskins, but a team that has tried (and failed) at finding a franchise quarterback for most of the last 15 years.

Griffin is definitely that, and Cousins could still possibly be that for another franchise. The only question is whether or not the cost of Griffin has left the team devoid of enough talent to make it work around him.

The Rams (the team with which three firsts and a second was sent) picked up cornerback Janoris Jenkins in the second round of the 2012 draft, and his quick success is already a mark in favor of St. Louis. The Redskins have one of the worst pass defenses in the NFL. This year, the Rams used the pick from Washington to trade down with Atlanta and they selected linebacker Alec Ogletree and wide receiver Stedman Bailey, -- the first of whom is having an excellent preseason and the latter having enormous upside.

And still, the Redskins are without a first-round pick next year. Will any of that matter if they win the NFC East for the second consecutive year?

Finding a franchise quarterback is tough. Finding one of the most exciting and talented players in the NFL that also happens to play the most important position in football is even tougher. This looks like one of those win-win trades, but if some other players for the Redskins don't step up, they're going to be in danger of lose-losing more than they win-win.

Here is a look at some of those players and what they can or can't do for your fantasy team. 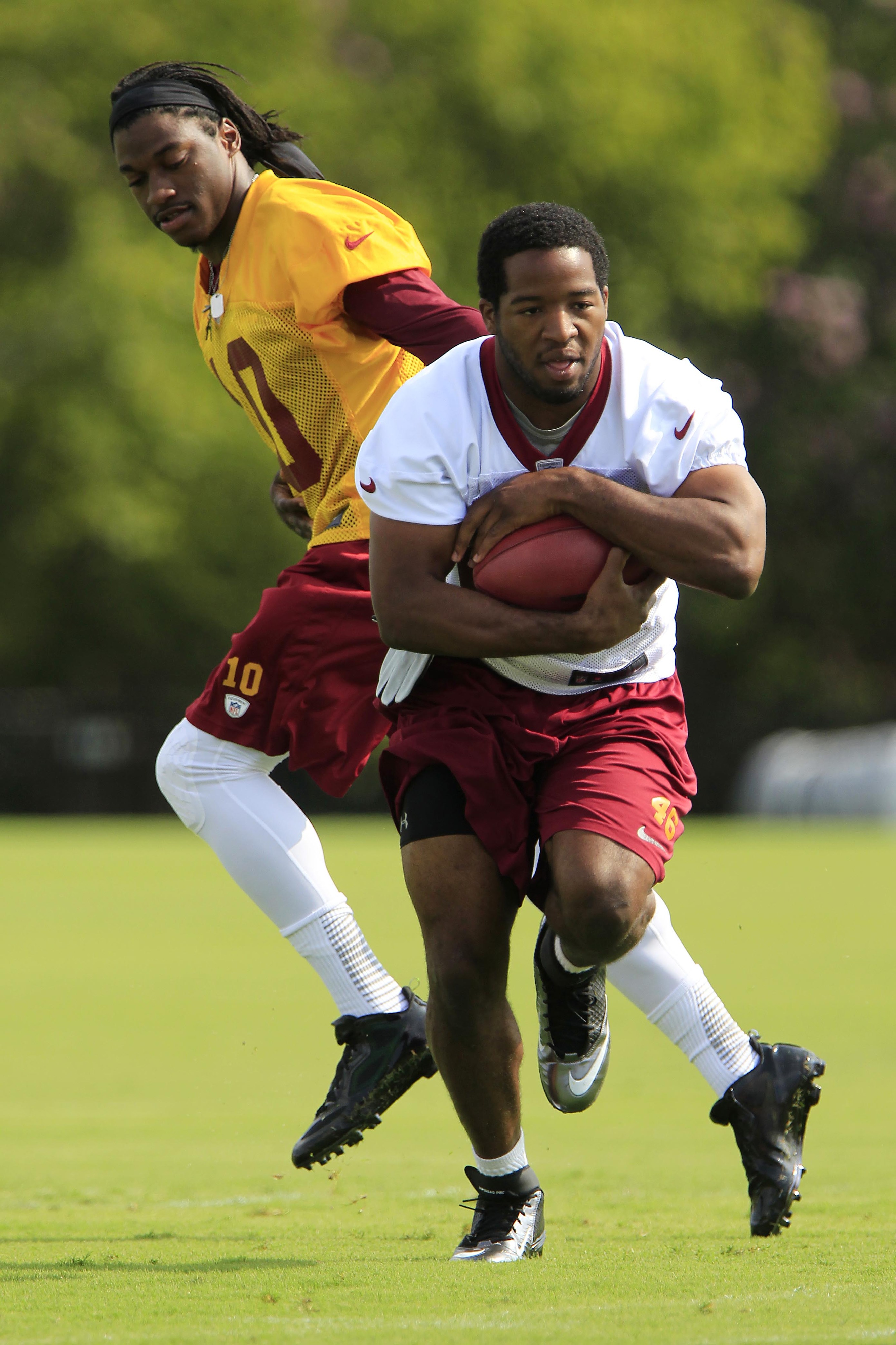 I'd hardly call this "the easy decision" because even if he's got the potential to be the most valuable player in fantasy football, he's also one of the most terrifying. When Griffin went down in pain in the fourth quarter against Seattle, I felt like I was having sympathy pains -- and it hurt.

Remarkably, it appears that Griffin won't miss a regular-season game, but he's going in cold. Without any preseason action, how long will it take the second-year player (emphasis on this is still only a second-year player) to re-acclimate himself to the speed of the NFL game? Even if he is one of the fastest. And how will his style of play change after perhaps only barely escaping a career-threatening injury?

I don't know if I believe that Griffin can ever play at different speeds. He could make it in the NFL as just a "pocket passer" because his arm is good enough, but when you can create in the open field so well, how can you turn that down? I mean, if I worked out as much as LL Cool J did, I probably wouldn't wear a lot of shirts either. For the risk-taker in your league, Griffin could be the best bet at QB. For the safer manager, there's little chance he will still be available when you're finally comfortable picking him.

Who wins between the risk-taker and the safe-player? We will find out.

The decision to draft Cousins paid off almost immediately, with Cousins starting in Week 15 against the Browns and throwing for 329 yards and two touchdowns in the win. There's definitely some thought around the league that the Redskins could trade Cousins for at least a first-round draft pick, but they aren't in any rush to do that what with the concern that Griffin could get hurt again.

Speaking of which, Cousins is on the shelf with a foot injury (meaning that our old friend Grossman started the final preseason game), but expected back soon. I can't imagine what it would be like for Washington to have to go one more game in franchise history with Grossman as the starter.

A "system" running back? Even if true, who cares? If there's a knock on Morris, it's that the system doesn't involve him in the passing game much at all so his total yards every year (which is usually just as valuable as rushing yards) are somewhat limited.

I don't think anyone is considering Morris over Adrian Peterson or Arian Foster, but he belongs on that next level.

Helu basically missed the entire 2012 season with a foot injury but looks healthy again, not to mention quite effective. Let's not forget that Helu had 1,019 total yards as a rookie in 2011 and it was his injury that opened the door for Morris. Whereas Morris is not a threat to catch the ball out of the backfield, Helu had 49 catches as a rookie.

The two of them have an opportunity to work quite well together, along with Griffin, and that's partially why I expect fewer rushes from both RGIII and Morris. He's a must-handcuff to Morris and a great sleeper pick just in case.

The Redskins already had Morris, Helu and Royster, so no need to draft a RB, right? Well in the opinion of Mike Shanahan, they needed to draft two.

They took Thompson in the fifth round out of Florida State, but he's had some issues in the preseason and is expected to be slated for a practice squad role. Jamison has done nothing to become special thus far either. The third running back will be Royster, and he had 5.9 yards per carry as a rookie in 2011 on 56 attempts, but dropped to 3.8 last season.

Williams has bounced from the Redskins to the Lions and back to the Redskins in his young career, but at 27 he's not young. He did have a good preseason game against the Bills over the weekend and might be slotted for the number four spot. In a Shanahan offense, that's sometimes better than other team's number ones.

There could very well be a limit to what a No. 1 receiver can do in this read-option offense, but Garcon is undoubtedly the go-to receiver. There is not anyone else here who seems to be as talented as Garcon, and even though he got hurt last year he still led the team in receiving. On a yards-per-game basis, it wasn't even close.

He had nagging injuries last year, but is healthy now and you just have to assume he will stay that way. Over a full 16-game season, he should project to be a solid WR2 in fantasy.

He's not what he used to be, and really he has only had one great season in his career, but he could still help you out in a pinch. He did catch eight touchdowns last year and if you prefer to find a reliable 600 yards at the end of your draft rather than taking a risk on a rookie, Moss is one of those boring choices.

Moss is listed lower on the depth chart than a player like Josh Morgan because he's a slot receiver, but those are becoming more valuable.

Morgan has been in the league for five years and he's never had a really productive season, though he's still reliable. He's never had more than three touchdowns, so starting for the Redskins right now isn't that big of a deal. Hankerson did more with fewer targets and was more valuable. Robinson and Hankerson are good sleepers, but not ones that I would draft.

Some of these guys could be cut by the time this is published.

In only seven games, Davis finished 21st among tight ends in Defense-adjusted Yards Above Replacement and caught a ridiculously good 75 percent of his targets, but a torn Achilles ended his season early. Projected out to a full year, he would have finished around 750 yards, which is fairly good for a tight end, but not amazing considering the state of the NFL offenses.

Also not good was his "pace" of zero touchdowns.

Davis has never caught a high number of touchdowns, he's got more competition this year, and he's coming off of injury, so I can't say that I see him as much of a sleeper.

The depth at the position is excellent though. Even without third-round pick Jordan Reed, this was already a pretty deep group. I can only imagine that the Redskins will run the ball heavily and spend a lot of time passing to their four-deep group of tight ends.

Meaning, perhaps none of them are draft-worthy, as well as docking some points from the receivers. Good news for Morris and Griffin, not so good news for everyone else.

The Redskins were 22nd in scoring defense, 28th in total defense and 30th in passing defense, so they were terrible right? Well, maybe not.

Washington was 17th in Football Outsiders DVOA ranking and 13th in Weighted Defense, meaning that it got better as the season wore on. Where did this hidden value come from? The Redskins forced the fifth-most turnovers in the NFL and grabbed 21 interceptions. And that was all without Brian Orakpo, their best player on that side of the ball.

Orakpo is back and the team also added cornerback David Amerson in the second round, though fourth-round safety Phillip Thomas was placed on IR.

Turnovers are rather volatile and unpredictable, but Washington gets to play the likes of Tony Romo, Michael Vick and Eli Manning six times, and the addition of Orakpo should help add to their sack total alongside Ryan Kerrigan. I can't imagine that Washington is a highly drafted defense, making it a very good potential sleeper if that's your thing.

Maybe trading away all those picks for RGIII didn't cost the Redskins as much on defense as we might have thought.