Can anyone ever get a read on the Giants? Even when they look like the worst, that's when they go out and win the Super Bowl. New York doesn't look bad this year, but can they rebound from a disappointing 2012, and which players are poised for big fantasy seasons?

At the midpoint of last season, I thought that the Giants might be the best team in football. At the finish line ... not so much.

New York started 6-2 with wins at San Francisco, at Carolina, at Dallas and against  the Redskins at home. However, the team went 3-5 in the second half of the year against a brutal schedule. The Giants lost to the Steelers, Bengals, Redskins, Falcons and Super Bowl champion Ravens. They scored an average of 12.6 points per game in those five losses. They actually beat the Packers, Saints and Eagles and scored an average of 44 points in those games.

The Giants move on from Ahmad Bradshaw but otherwise bring back the same offense. Can they stay more consistent this season, will they see the biggest breakout season from a running back and will the Giants go back to being one of the best teams in the NFC? And do it for a whole year?

Here's a preview of the New York Giants, for your fantasy team. 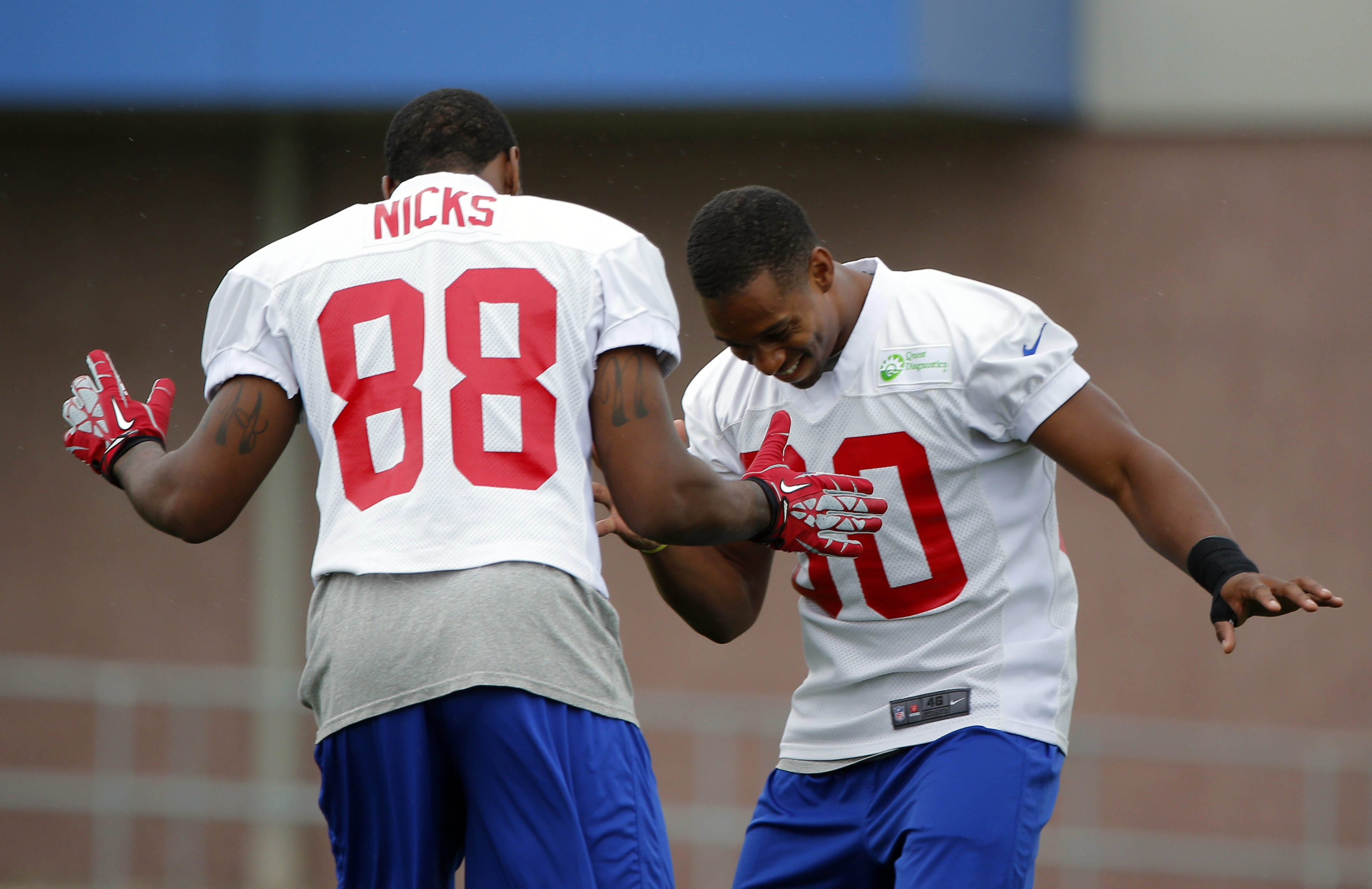 I've upset some Giants fans by being hard on Eli Manning. (If you are reading this on Big Blue View, you may remember an article called "Eight Simple Things About Eli Manning.")  But the truth is that when I wrote that article, Manning really had been a fairly mediocre statistical quarterback throughout his career.

It was that same year that I wrote about Manning that he had a breakout season and won his second Super Bowl. In my defense, he went back to normal Eli mode last year and he really started off his career pretty horribly.

Manning has had a significant upgrade at wide receiver over the last few years and now the offense adds tight end Brandon Myers for the next four years. I don't take back anything I've said about Manning and I don't take away his two Super Bowls and excellent postseason play. For fantasy purposes, he's a good option to play 16 games and be productive, but he's also got a hard ceiling. A safer option rather than a high-risk, high-reward. If that's your thing.

Nassib had a poor preseason performance and Painter got all of the relief work in the Giants' third preseason game.

The Giants have struggled in the red zone in exhibition play, but Wilson had a highlight 84-yard touchdown run in the third preseason game. I'm not going to make as big of a deal of the Giants' preseason struggles as the New York Post did. There's some very talented players here, so a "2012 Eagles" season would be quite surprising.

If Wilson gets the opportunity to carry it 300 times and not share with Andre Brown too much, he could be a threat for 1,300-1,400 yards rushing. Brown struggled at times in the preseason and Wilson was named the starter, so is that enough to assume 250-300 carries or is it a 50/50 split?

Unfortunately that decision could be very fluid. I'll assume he gets about 65 percent of the carries.

Brown was the handcuff to draft for David Wilson, but he has since suffered a broken leg. He is going on the injured reserve with return designation, but this all but clears Wilson to hold down the job for the foreseeable future. Brown has some value as a handcuff when he returns, but he is off the radar until then.

In the beginning of his career, a lot of people were skeptical about Cruz, including myself. I watched him play against the Seahawks and get "lucky" to have a very productive day -- eight catches for 161 yards and a touchdown. Then you watch him more and more and you start to realize that this guy is about more than just a lucky bounce.

Cruz has had 13 100-yard games since the start of 2011, including playoffs. A.J. Green has nine such games over that span.

The record for most catches during the first two years of a player's career is 168 by Marques Colston. Cruz was an undrafted free agent in 2010 who did not play during his rookie year, but how many catches does he have over his first real two years in the league? 168.

I am not worried about the bottom falling out here. Cruz is one of the best receivers in the league and he's off to one of the best starts in NFL history for a receiver. It's a shame that he is already 27. But I love everything about Cruz, including the personality.

I also happen to be a pretty big fan of Hakeem Nicks, so you can call me a "Giants hater" if you like, but really it was just that one guy who happened to be overrated. You're greedy.

Nick is two years younger than Cruz and caught 155 passes for 2,244 yards and 18 touchdowns over the 2010 and 2011 seasons in just 28 games. He was like Victor Cruz before (and during) Cruz's success. But he had very little success last season and the 53 percent catch rate isn't good for anybody.

I will give him the benefit of the doubt here and say that he bounces back in a contract year, a great candidate to get on a buy-low basis.

Randle says that he understands the playbook better now and is ready to make the jump to live up to the potential that made him a second-round pick last year. Once again, I like this Giants receiver, but to clarify:

If he's the No. 3 receiver, I like him but there's only so much to go around. If anything happens to Cruz and Nicks, which is definitely possible with Nicks, I love him. I can only project a healthy year at this point from all players involved, though let's say that Randle gets a couple of starts.

And then whoever is left will fight for the leftovers, of which there aren't many.

I still like Myers and I think he played incredibly well with Oakland as one of the most valuable receiving tight ends in football, but you can't extrapolate his production just because he's on a better offense. He's not going to be needed as much in New York because the offense has Nicks and Cruz and Wilson and Randle. I would project something more along the lines of 2012 Giants tight end Martellus Bennett.

These guys are also here.

In typical Giants fashion, the team went from 25th in scoring defense as the 2011 champions and 12th in defense as the 9-7 followup. Normally we would be used to seeing a defense that bent but forced turnovers and generated a high number of sacks. That did not happen last year.

New York was third in turnovers forced, but 31st in yards allowed. The team finished 28th in passing defense, 25th in rushing defense and 28th in yards per carry allowed, but had the third-most interceptions and the fourth-most forced fumbles.

The major difference is that Jason Pierre-Paul led the team with just 6.5 sacks. As a team, the Giants dropped from 48 sacks to 33. They scored two defensive touchdowns. How are things different now?

The biggest loss is going to be strong safety Stevie Brown, who is out for the year. Brown came out of nowhere to pick off eight passes and lead the league with 307 interception return yards. That's not something easily replaced when the injury occurs in the preseason. The Big Blue View's final 53-man roster prediction gives a good idea of who will probably be here and who won't.

The team drafted defensive tackle Johnathan Hankins in the second round and defensive end Damontre Moore in the third. Moore slipped considerably in the draft, but has had a lot of positive reports during the offseason and could be the missing link on the defensive line. He's also currently trying to recover from a hurt shoulder.

New York's team defense could be a darkhorse candidate as the best in fantasy football, and the Giants seem to prefer it when everybody doubts them anyway.

At least that's what they (expletive deleted) tell me.