Kansas City Chiefs fantasy football draft preview: A lot of upgrades but how much closer are they to the middle?

The Chiefs have a different look this year and thank goodness for that, because nobody wants to see the 2012 version of this offense again. Here is why I have the Chiefs at 10-6 this year with more than a couple fantasy options.

Share All sharing options for: Kansas City Chiefs fantasy football draft preview: A lot of upgrades but how much closer are they to the middle?

Regular news: Who cares why it happens? If Kansas City makes the playoffs, it will be a triumphant first season for Andy Reid. Triumphs were not something that the Chiefs saw a lot of in 2012, especially after the first month of play.

Over their first four games of the year, Kansas City averaged 22 points per game and Matt Cassel threw five touchdown passes against seven interceptions. Fortunately, he only threw five more interceptions over the rest of the season. Unfortunately, I spun that stat as well as I could because holy crap did the Chiefs get bad after that. KC averaged just 10.3 points per game over the next 12 contests.

Between Cassel and Brady Quinn, the Chiefs threw three touchdown passes over their final 12 games. 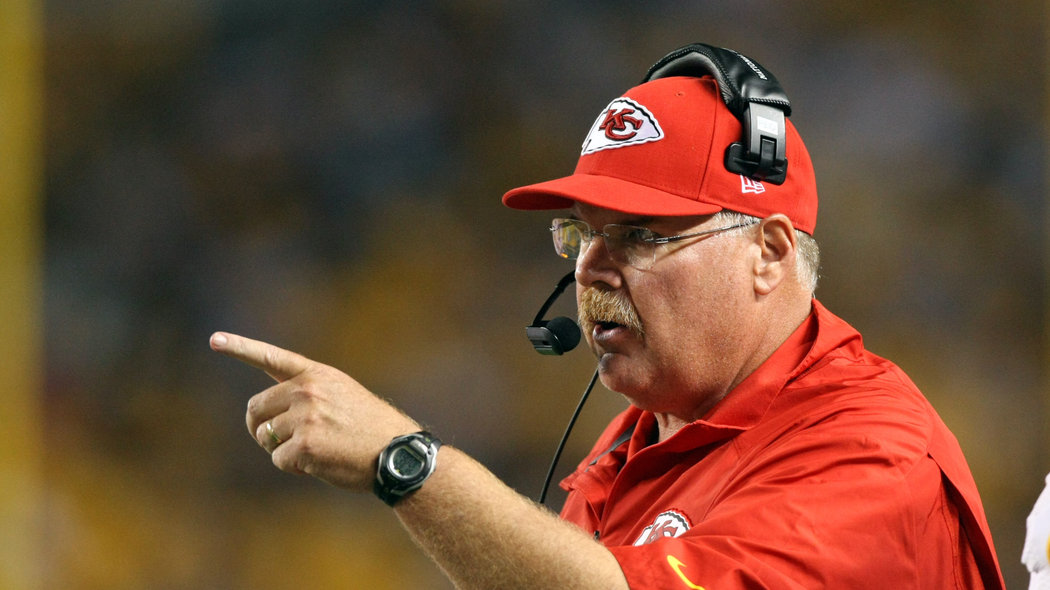 The first move was obvious. The organization fired general manager Scott Pioli and head coach Romeo Crennel. Seeing that Reid had been let go after 14 mostly-successful seasons with the Eagles, the Chiefs saw an opportunity to find stability after having three head coaches in the last five years. They also hired John Dorsey to be the new GM, who was one of the key members of personnel in the Packers organization over the last decade -- Dorsey was Director of College Scouting during the years of impressive draft picks like Aaron Rodgers and Clay Matthews.

Could he do the same with the Chiefs? He immediately got his draft opportunity since Kansas City was picking first in this year's draft. There was a lot of speculation as to who they would select, with at least a dozen names thrown around in the months up to the draft. Finally they opted to keep the pick and select tackle Eric Fisher.

Despite the fact that the team already had Branden Albert, relegating Fisher to a role at right tackle this year, it seemed best for them to get a player that could anchor the offensive line for the next decade. Though Fisher has apparently struggled thus far, Dorsey insists he is "very happy" with the tackle.

After having seen this offense reach lows we couldn't have possibly imagined during a passing era in the NFL, how could you not be?

The Chiefs of course parted ways with Cassel and Quinn, but what was less predictable was that a team could trade for a player that had a QB rating of 104.1 last season for two second-round draft picks (a 2014 third instead of a second if the Chiefs go .500 or worse this year) and some considered it a gross overpay.

Anything that has the potential to be that much better than Cassel and Quinn should be considered anything but gross.

But can Alex Smith come close to the success he had in San Francisco without Jim Harbaugh? Are the other additions on offense big enough upgrades to transform one of the worst units we've seen this century? And am I crazy for picking the Chiefs to go 10-6?

Here is a closer look at the Kansas City Chiefs for the purposes of fantasy football. Yes, I just said "Chiefs" and "fantasy" in the same sentence. 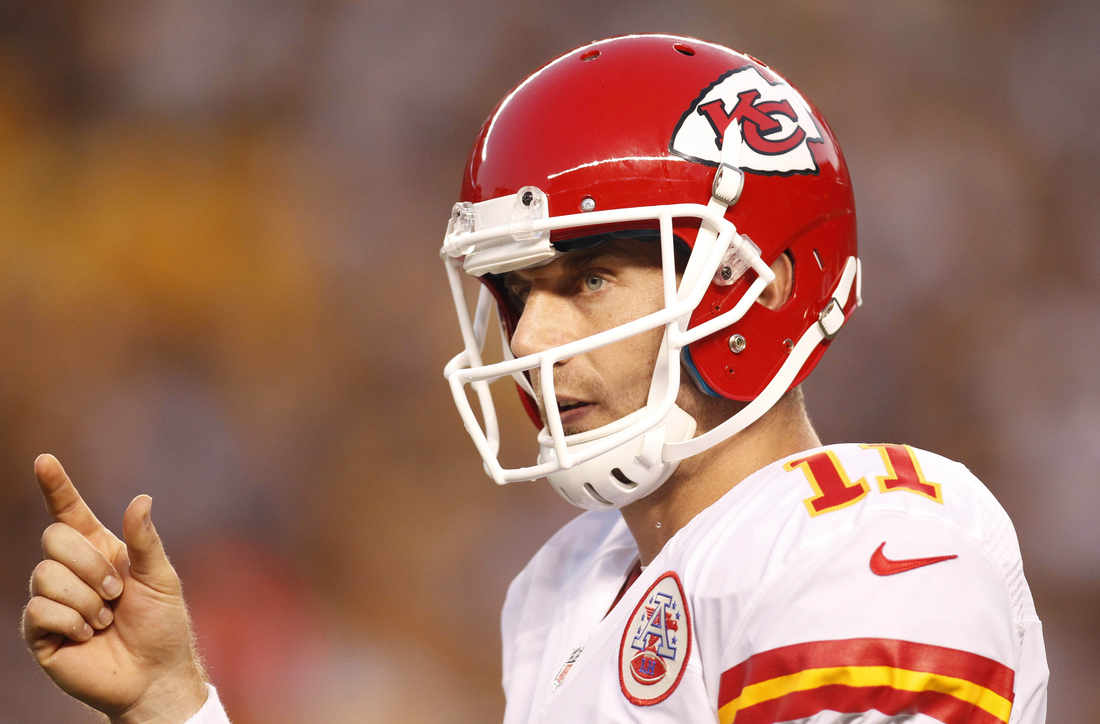 In the two seasons before Jim Harbaugh, Smith was improving (not that he could really be any worse) but he still was fairly mediocre; 60.1% completions in 20 starts, 214 yards per game, 32 touchdowns, 22 interceptions, 6.6 yards per attempt, 81.8 QB rating.

That will get you by on some teams, including the 2009-10 49ers, but it's not something teams clamor for. His numbers over the last two years, though, are something you would want:

64.3% completions in 25 starts, 187.7 yards per game, 30 touchdowns, 10 interceptions, 7.4 yards per attempt, 95.1 QB rating. Fewer yards and fewer touchdowns per game, but limiting turnovers really helped turn Smith into a quarterback you can win with if you have a strong defense and running game.

The Chiefs have Jamaal Charles and four Pro Bowl players on defense. This could work.

Kansas City doesn't have a tight end like Vernon Davis, but the number of options they have at the position should help offset their lack of production from that group last year. Dwayne Bowe and Michael Crabtree are arguably comparable in terms of value. And Charles is one of the best backs in the league.

Dorsey thinks Smith can be a "top 10 quarterback." I wouldn't go that far, but he may very well be underrated, or at least the situation around him might be.

A former number one pick backed up by two undrafted free agents. There was a time when you might've rather had Daniel, actually. That time isn't now.

On one of the worst passing offenses in NFL history (relatively speaking), somehow Charles still ran for 1,500 yards and over five yards per carry. And he's probably got five more years left in his prime.

Coaching LeSean McCoy two years ago, Reid helped him to 17 rushing touchdowns. Of course, last year McCoy had two rushing touchdowns, so who knows what to expect. But if the Chiefs offensive line starts to become a better, more cohesive unit by the end of the year (when Fisher has a bit of experience), Charles could be the leading rusher in the NFL when all is said and done. I expect that every KC game this year will be important, and Charles could see a heavy workload during the fantasy playoffs, like when facing the Raiders in Week 15 and the Colts in Week 16.

Interesting that he hasn't really been considered a lot as the number one overall pick, but that's probably because he hasn't scored much with just 17 rushing touchdowns in four years. I will expect a nice year from Charles, regardless.

Not everyone was happy about this third-round draft pick, and reports out of training camp were hit and miss, but Davis did have a 109-yard kickoff return in the preseason. The Chiefs need a good backup running back, and that's all that Davis is -- if he wins the job.

He won't take anything away from Charles, and he won't be worth drafting as anything other than a handcuff option.

If we are forcing Gray or Sherman into action, I can only assume that my 10-6 prediction has gone horribly, horribly wrong.

Bowe is one of those fantasy players this season that a lot of managers are going to hold a grudge against for no reason other than the fact that they expected him to be a WR1 and "he blew their season." Well, Bowe did have a down year production-wise, but what was he supposed to do about it?

Even with Cassel and Quinn, his 52-percent catch rate is about normal for Bowe. That's not great, but the point is that he takes his targets and does the most he can with them. He's reliably and usually one of the top 20 receivers in the league, even if he rarely has been one of the top 10 outside of his 15-touchdown 2010 season.

Don't expect that again, but you should feel safe that you're gonna get this:

On the other hand, Avery had Andrew Luck and still only caught 48 percent of his targets. Also, he was among the league leaders in drops. Avery might produce at times for your fantasy team, but he's not someone you can rely on week-to-week, he's only someone I would plug in on a bye week when I'm desperate.

I really like Dexter McCluster. I just don't know what to make of him and I'm not sure exactly how prolific he will be with Andy Reid, but I have high hopes that he is going to be an integral part of the offense.

He certainly should be, but he just hasn't had many touches in the preseason. Maybe they're hiding him?

2013 Prediction: 40 catches for 400 yards, three touchdowns, 100 rushing yards (But I hope for a lot more and he's a good sleeper pick based off how talented he is, naturally.)

I wouldn't classify these guys as much right now. San Francisco was having an "everything must go" sale on A.J. Jenkins'.

Here is what Joel Thorman of Arrowhead Pride had to say about the tight end position:

The Chiefs tight ends are an intriguing group for fantasy this season. There are three players who could all see a lot of playing time. The common thinking after the draft was that the Chiefs could consider cutting Tony Moeaki, who was coming off of a knee surgery. This made sense when you considered that the Chiefs had signed Anthony Fasano to a four-year contract and drafted Travis Kelce in the round. But despite being listed third on the depth chart, Moeaki has had a very good camp. The Chiefs may screw you in fantasy because of their tight end by committee but that position group will be busy this season.

If a Chiefs fan tells me that they're going to screw me in fantasy at the tight end position, I believe him!

As said before, Kansas City had four Pro Bowl players on defense despite their 2-14 record: Eric Berry, Derrick Johnson, Justin Houston and Tamba Hali. Imagine what they could do with a competent offense that doesn't put them in terrible field position over and over again without longer rest periods when they've done their job?

By playing in the AFC West, by facing the easiest NFC division (the East), by facing the AFC South (Titans, Jaguars and, to some extent, the Colts) and by drawing the Bills and Browns by way of finishing in last place in 2012, the Chiefs might have the easiest schedule in the NFL.

Of course, we don't know that yet because we haven't seen how good these teams really are, as someone could say "well we play the Chiefs!" and that's really not as bad as it used to be.

There are several good IDP options here, but also an opportunity to be a top 15, or even top 10, fantasy team defense. That depends on the offense doing a lot better (they should) and the D forcing more turnovers. The defense didn't do themselves any favors last year by finishing 31st in turnovers forced, and the secondary needs to get better after they added Dunta Robinson.

Perhaps the Chiefs aren't nearly as good on defense as I've projected them, perhaps they won't finish as good at 10-6 and make the playoffs and perhaps it is I who is the fool.

But aren't ya glad I didn't say banana Cassel-Quinn are the quarterbacks?

These aren't your one-year-younger-self's Chiefs.