The Raiders have become the butt of many jokes in the last decade, but it finally looks like they have a GM who knows what he is doing. Will that matter at all in 2013 or is Oakland the inevitable destination of the number one pick?

I am so befuddled by the Oakland Raiders this season (even moreso than usual) that I specifically had to reach out to Levi Damien at Silver and Black Pride and say "Explain this eight-sided Rubik's cube to me, please." He did the best he could given the hand he was dealt once again as a Raiders fan.

It's another rebuild season, but perhaps this is a project that is finally becoming something that will last for awhile.

General manager Reggie McKenzie is actually making a series of moves that don't look like the types of moves we are used to seeing from Oakland, i.e., they aren't ridiculously head-scratching. Rather than trade two high draft picks for an expensive quarterback on the wrong side of his career, they made a value move to pick up a veteran backup who could possibly be just as efficient.

Rather than overdraft a player that nobody was considering that high, they traded down and recouped a second-round pick in order to select that same player. Instead of just drafting the fastest players at the combine, Oakland was just looking for the best players.

Whether or not any of those moves work out remains to be seen, but at least they didn't risk the farm in making them as they try to shed years of bad money and move on to the next era of Oakland Raiders football.

If it works, it works. If it doesn't, it won't be as costly. And that's exactly what McKenzie needs to be doing in order to transition to that next era: Don't be the Raiders we've come used to seeing.

Here is the team that he has put together and whether or not they it actually help your fantasy team. 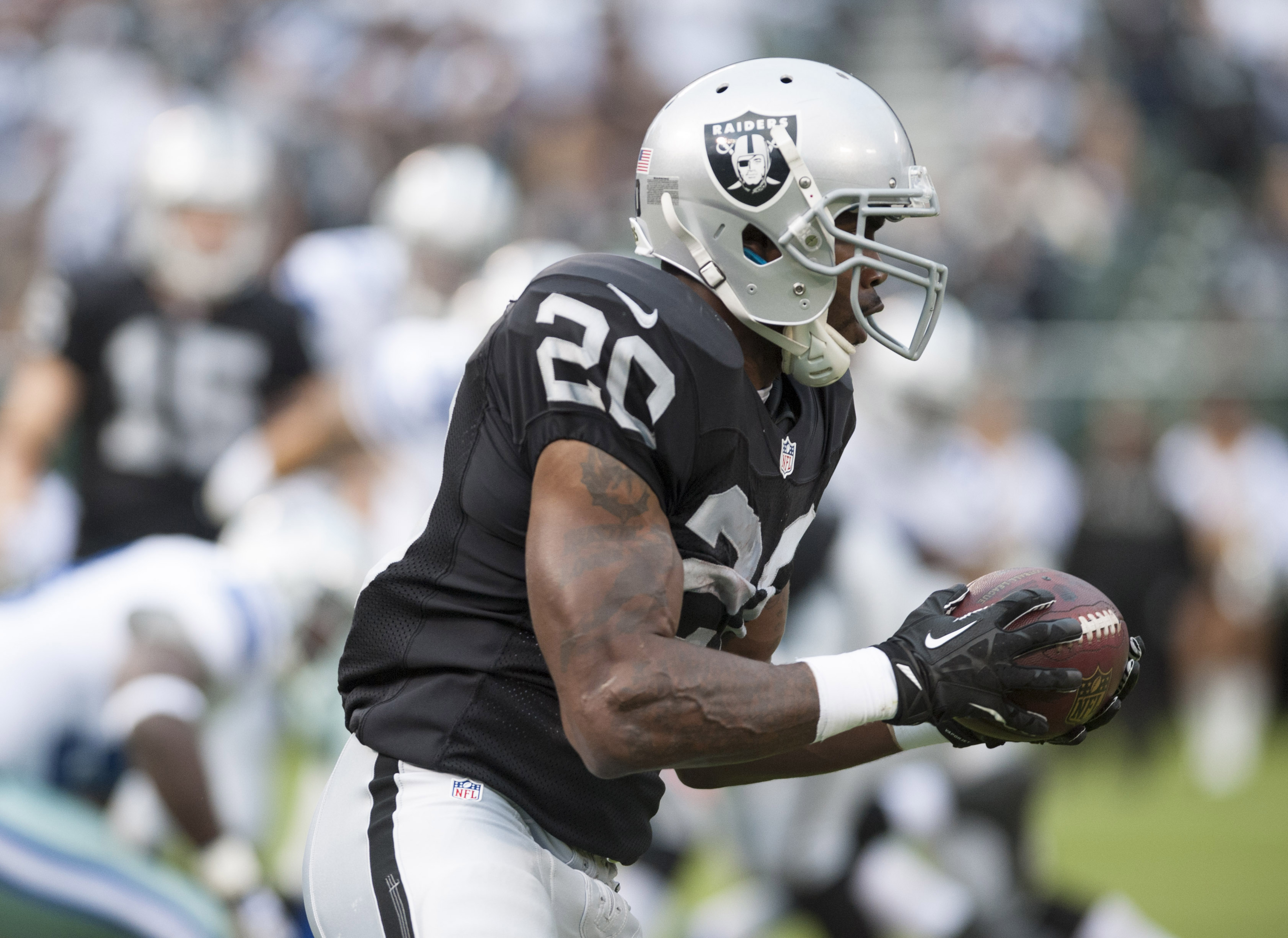 And just like that Terrelle Pryor is the starting quarterback for the Oakland Raiders. How long that lasts remains to be seen. With left tackle Jared Veldheer out indefinitely due to a torn triceps, the quarterback is going to be running for his life. Who is better at running, whether it's for your life or just for the hell of it?

I think that the Raiders are going to be playing for the number one overall pick next year (and they probably should so they can add either an elite pass rusher or franchise quarterback) and that means going with the 24-year-old that you want to find out if he can play or not.

I'm slotting half the starts to Pryor and half to Flynn. Pryor did a much better job in the preseason, and the offense as a whole moved the ball considerably better as well. But neither quarterback should do especially good.

Flynn has come close to losing the starter job to a younger, more inexperienced player two years in a row with two different franchises. With the Seahawks personnel, maybe he's a league average starter. In Oakland, I'm a bit more concerned.

I was a pretty big fan of McFadden going into last season but nope. Not gonna do that again.

Could that make him the best value? Sure. A sleeper? Sure. Maybe he does rush for 1,700 yards? Sure. On my team?

The Raiders need a reliable running back behind McFadden but is that guy Jennings? After not playing in 2011, Jennings had 2.8 yards per carry for the Jaguars in 2012. He had a total of 5.4 yards per carry in his first two seasons and flashed potential but hasn't been successful lately and isn't in a good situation.

I wouldn't worry that much about handcuffing him to McFadden.

You could almost treat him like a spot-start receiver in a PPR league and gain some points, but as nice as it is to see one big game from Reece (193 total yards against the Saints), what else is there to him for fantasy purposes? A spot start here or there, but not a full-time back.

The Raiders drafted Latavius Murray in the sixth round but he is now on injured reserve. Stewart would be the last guy in line for carries. Said Levi:

Jennings is the backup and looks pretty good. Jeremy Stewart is next up. He has had his moments but hard to say if he can thrive in the power scheme as he did in zone.

Best fit for the Raiders offense?

I see Rod Streater coming out as the top target because he has all the tools and fits the offense well.

From an undistinguished career at Temple, to being undrafted in 2012, to gaining 584 yards with Oakland, it's been an interesting ride for Streater already. Consider that a player like first-round pick A.J. Jenkins has already been traded and barely played in the NFL, but Streater looks like he could be a long-term solution for the Raiders.

Not only does he look like a wide receiver, but he's got one of the best receiver names since James Jett.

Unfortunately, he's started off the year with a concussion and could miss the start of the season.

Moore can't go out there and repeat a 45-percent catch rate and stick in the NFL for long. On the bright side, he still somehow managed 741 yards and seven touchdowns, so if he caught his rate up to 55 percent, he could be well over 1,000 yards.

He had just 166 yards in his final seven games last year.

The Raiders have found good value with Streater and Moore, but you can't just have players who are good value -- you need players who are good. To avoid a 13- or 14-loss season, Oakland is going to need more than potential, it is going to need production. I wouldn't advise drafting Moore, but he's always in mind for a quick trigger on the waiver wire if he has a good game.

Criner was extraordinarily costly with his -63 Defense-adjusted Yards Above Replacement in a very small sample size. That's not going to cut it. Can a seventh-round pick and a player coming off a missed season help fill out the receiving corps, or do the Raiders have the thinnest receiver unit in the NFL?

I have always liked Ford quite a bit. He's like a Go-Go Gadget -- you wind up him at his own 5-yard line and set him free and who knows what'll happen, but it could end up in a 95-yard touchdown. Or a safety. He might be my favorite receiver on this team, but there's little reason to draft him.

He'll be available should he start to go off. The other two I am not keeping much of an eye on right now.

The Raiders lost their leading receiver, by a wide margin, when Brandon Myers signed with the Giants. How will they replace that? I literally have no idea.

Ausberry's Wikipedia photo looks like a grainy picture of Bigfoot.

You would have to think that one of these guys, or the collection of Oakland tight ends, will catch their fair share of balls this season. But 79 catches for 806 yards? No. They possibly went from one of the best tight ends in fantasy to being in the absolute worst position.

They were 28th in scoring defense, 26th in turnovers forced and their leading sack-getter had 4.5 of them.

The Raiders drafted D.J. Hayden in the first round, moved Taiwan Jones from running back to corner back, brought back Charles Woodson and rookie linebacker Sio Moore has been impressive. I'm not entirely sure that the pass rush is improved, but the unit overall looks a bit better, and it does get to play in the AFC.

But "a bit better" or even "better" would still place them well in the bottom half of the league. Oakland has cut dead weight and brought in fresh faces but is still a long ways away from being a real threat. They won't be good now but with McKenzie I do feel like it's safe to say...