The Falcons blew two leads in the playoffs last year and only recovered once. How much difference will a running back change make and can we expect more of the same from the skill players?

Up 17-0 on San Francisco in the second quarter of their NFC Championship Game matchup, the "Hotlanta Haters" had to swallow their pride and their "haterade" as "haters gon' stop hating" with the Falcons rolling to the Super Bowl...

I hate to break it to you.

The 49ers outscored Atlanta 24-7 over the rest of the game and 14-0 in the second half, neutralizing the Falcons offense and forcing consecutive Matt Ryan turnovers in the third quarter. Ultimately Atlanta turned it over on downs after having 1st-and-10 at the 49ers 16-yard line with 2:23 left. The high-powered offense needed just one play to take the lead and likely the game, but fell just short.

Could the haters have been right all along? This was a team that the week prior had blown a 27-7 fourth quarter lead to Seattle and needed a football miracle to win the game. And both of these games came at home, where the Falcons had gone 7-1 in the regular season. Which Falcons are to be believed?

The Falcons enter the season with much of the same on offense and a good chance to repeat as NFC South champions, but there is also a scary lack of depth. Should anything happen to the "Big 5" sporting goods on offense, Atlanta's going to need more than last second field goal to win it.

They're going to need a football miracle. 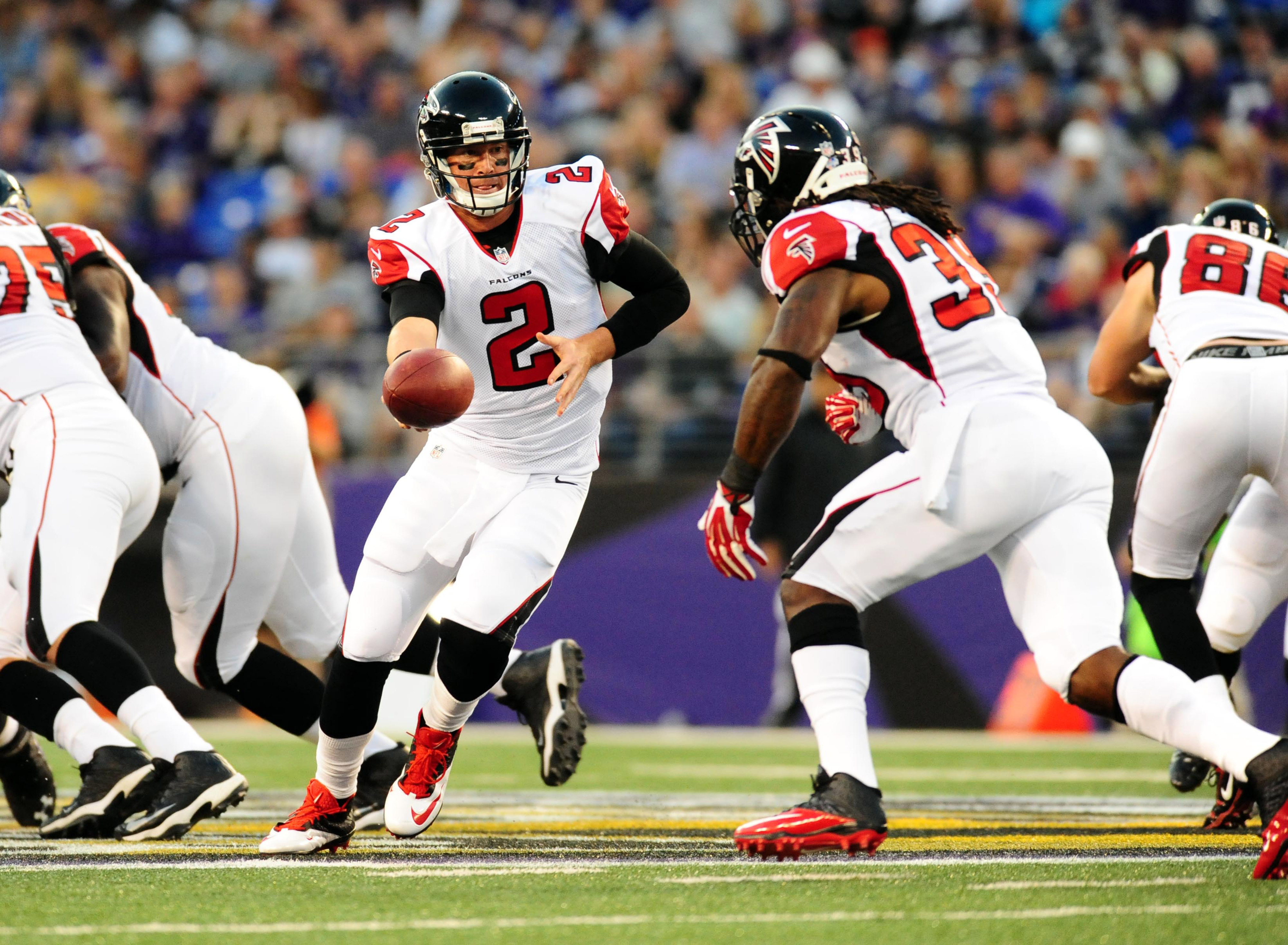 Ryan is one of only three quarterbacks to win 50 games over his first five seasons in the NFL. His 56 wins are the most all time, even eclipsing the 52 wins of Aaron Rodgers over the same time period. However, this is a fantasy football article.

There's still a level of separation between Matt Ryan and the very elite class of Manning, Brady, Rodgers, Brees. I'm not sure that I see any significant differences on offense, other than the addition of Jackson (who is 30, by the way) that is going to make Ryan significantly better this year. That doesn't mean he's not really, really good though.

Let's just hope we don't have to see Davis play to find out how good or bad he really is. Not that most teams wouldn't be in trouble if their starting quarterback got hurt, but this talent gap seems to be a bit bigger than most teams.

The Dirty Birds get a Dirty Thirty running back. He has 2,802 career touches but he hasn't missed more than a game since 2008. Durability is only good until it's not any more and eventually Jackson's career is going to come to an end.

Atlanta has been looking for a back that can handle carrying the football and also be a part of the passing game, and that's not something that they had with Michael Turner. Jackson won't be leaned on heavily, making him just the right kind of back for this system. That makes him a decent flex play, and possibly a good RB2.

Rodgers is a really talented football player but not an every down running back. Perhaps one year he will have a "Darren Sproles-like" amount of production and top 1,500 total yards from scrimmage with a handful of touchdowns or a "Reggie Bush-like" 100 receptions in a year.

For now, his best value would be in a PPR league, where he's a decent player to stash on your bench.

That's 330 carries for Rodgers and Jackson, already more than what Rodgers and Turner combined for last season. The 30-year-old Snelling isn't going to contribute anything in your fantasy league. If Jackson got hurt, I'm not sure any other back in Atlanta would hold fantasy value.

That's why they signed Jackson. He's the only guy that can do what he can do.

When does "Reggie Wayne overtake Marvin Harrison" in this scenario? In that case, Harrison didn't turn into a pumpkin until 2007, when he was 35 and Wayne was 29. (Coincidentally, Wayne is now 35.)

But White is only 32 and this duo should remain even-steven for a couple more years. White was still a hair more valuable last year and is still the type of receiver that will receive more targets for now. None of which changes the fact that Jones is likely one of the top 10 receivers in the NFL.

On the other hand, White caught 115 passes in 2010 and 92 passes last year, a difference of 22 points in a PPR league. I still think that White will be more heavily targeted by a small margin, perhaps 140 targets to 130 targets, approximately.

I think that the team will pass it less only because they've seemingly got a better running game now and they passed it quite a bit last year. The Falcons would rather be balanced and that's probably a factor that people will point to in their consecutive playoff collapses earlier this year. I think that points to slightly fewer catches and yards for the dirty duo.

Douglas has had like four weirdly productive games in his career. The rest has been a fantasy dud.

He is trying to keep a streak of alive of catching exactly one touchdown in every season of his career. (Okay, he probably wants to break that streak, in a good way.)

Common theme here: If anything happens to Julio or Roderto, that's no bueno.

Other players on the Falcons 53-man roster and practice squad as of this writing.

Every fan seems to wonder why a player would retire when he's still capable of playing at a high level, and yet every fan wishes that he could retire from his sad day job. Maybe you don't view playing football as a sad day job, maybe you don't think there are things more important than money, but whatever his reasons are, Tony Gonzalez is excited about retiring.

Or at least, he's really starting to feel the grind. How could we blame him? Gonzalez has shown up every day for now 17 years. He has missed two games since 1997. He changed the way NFL teams play offense. And just last year he was possibly the second-best tight end in football after Rob Gronkowski.

Toilolo is an interesting 6'8 prospect that played opposite of Zach Ertz at Stanford. He could develop into one of the top red zone targets for the Falcons and that would be something.

Atlanta was decent on defense last year, but not dominant. The Falcons finished 5th in scoring defense, 24th in total defense, 5th in turnovers forced, 1st in touchdown passes allowed, 23rd in passing defense, 21st in rushing defense, and 29th in yards per carry allowed.

The 29 team sacks weren't very good and 10 of those belong to the departed John Abraham. Much like the Turner replacement on offense, the Falcons added a different veteran to fill the void by signing Osi Umenyiora.

The most underrated aspect of the Atlanta defense is the safety duo of Thomas DeCoud and William Moore. Well, they were underrated until they made the Pro Bowl last season. Those two combined with Asante Samuel for 15 interceptions last year.

The Falcons added a pair of corners with their first two draft picks: Desmond Trufant out of Washington and Robert Alford out of Southeastern Louisiana.

Basically the defense was decent in the actual game but with the turnovers and points allowed, pretty good in fantasy. It seems like they should be better, but playing the Saints twice, the Panthers twice, the Buccaneers twice, the Patriots, Packers, Redskins, and 49ers, they're going to have their hands full.

The question once again becomes: If they get a lead, can they hold it?