Over the last couple of years it's hard not to wonder if the Buccaneers have more money and cap space than everyone else. While most teams typically make zero or one big free agent moves every offseason, the Bucs came to party and make it rain.

Vincent Jackson and Carl Nicks got big free agent contracts in 2012. This year brought Darrelle Revis through trade, and Dashon Goldson through free agency; Mike Williams got a contract extension. Typically, I think you should build a team through the draft and use free agency as a supplement, but it's hard to look at those deals and hate what Tampa Bay has done.

Some could say that with a top running back, a pair of good receivers, a capable quarterback and an elite run defense, the Bucs really just need a pass rush and pass defense to possibly become elite. So they added perhaps the top corner in football, one of the top safeties, and then drafted a corner in the second round of the draft.

Paired with 2012 first round pick, safety Mark Barron, and now maybe all they need is that pass rush. And having a secondary that can actually cover the receivers could go a long way to helping that. All of which is leading some to pick Tampa Bay to win the NFC South just a year after they lost five of their last six games.

If Tampa is going to return to the playoffs it won't just be because of their additions, it will be because of a savvy 2012 draft pick that is my 2013 MVP prediction and also the top player in fantasy football.

Here is the who, how, and why for the Bucs fantasy season: 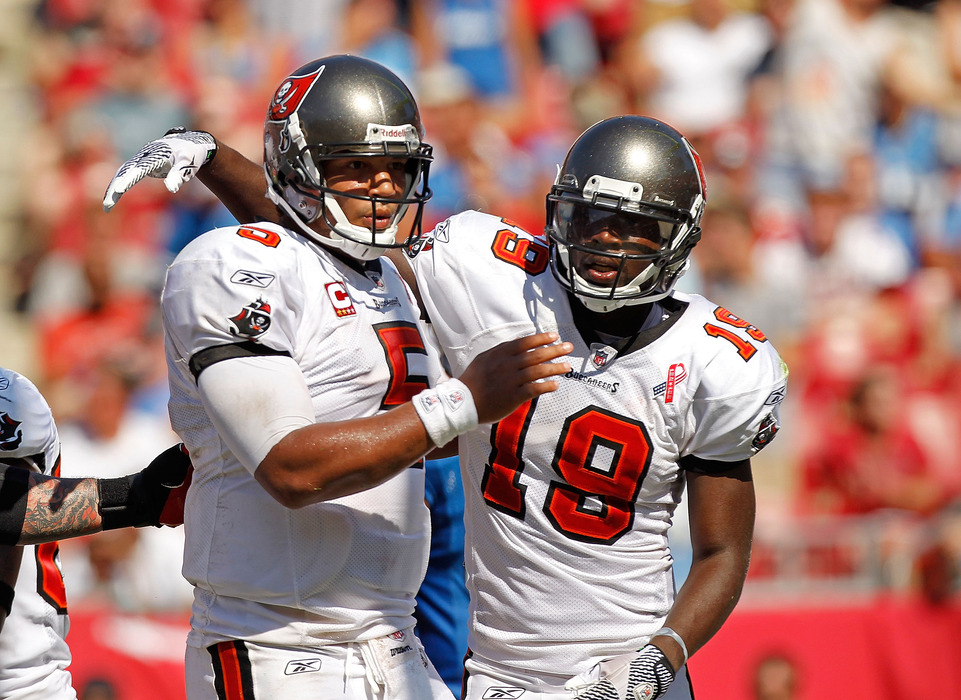 Freeman is about 50/50 in his four career seasons so far, which should be kind of a familiar stat to him considering he completed just under 55-percent of his passes a year ago. Despite this, Freeman threw for over 4,000 yards and a career-high 27 touchdowns. Believe it or not, the 17 interceptions was the second-best mark of his career, and he randomly threw only six picks in 2010.

Which is the real Josh Freeman?

Well, rookie seasons are almost not worth studying sometimes because they are usually so not ready for the pro level and they just need to start getting acclimated to what it's like. Over the last three seasons he's throwing an interception on only 2.8% of his attempts, compared to 6.2% as a rookie.

With Jackson, Williams, and Martin, Freeman should just let his weapons do most of the work for him and coolly and calmly get them the ball.

It would also help if his receivers caught more than half their targets, which is hopefully something they've been working on together. Freeman really struggled down the stretch, throwing six touchdowns and 10 interceptions over the last six games, but lest not forget that in the six games before that he had 16 touchdowns and two interceptions.

Freeman can be great, but you've got to have great insurance if you draft him.

Veteran Dan Orlovsky is also around as insurance for the moment, but the Bucs drafted Glennon in the same vein that most teams are following suit of the Patriots and Packers and realizing that having a valuable prospect in tow can be quite valuable. Glennon gets a couple years to develop and hopefully show off in the preseason, perhaps a few spot starts, and then either the Bucs feel comfortable in case Freeman leaves or trade him for a high draft pick.

It's a win-win situation.

I'm just going to quote myself. Martin is my pick as the top running back  -- and ultimately the top player -- in fantasy football this season. He is also a great candidate for league MVP honors.

Here is what I told David Fucillo (Niners Nation, SBNation Fantasy War Room) about why I picked Martin first overall in our Fantasy Writers League:

Martin was a first round pick in 2012, so you know that he's got what they call "a good pedigree." Martin is 5'9, 223 pounds, and is built like the ideal running back. Martin carried it 319 times last year with 49 catches, but he didn't put on any playoff touches since Tampa didn't go to the playoffs. He should be the freshest of the four. Martin was a rookie, so he's not heavily worn-on in his professional career. Martin, he's the man.

Martin rushed for 1,454 yards, 11 touchdowns, 472 receiving yards and another touchdown, so you know that he can play. He plays on an offense with a good quarterback and solid receivers, so he's not relied on to be the only cog of the offense, but they're not so good that he's going to be ignored either. He's still the best player on the offense. The Bucs seem to be in a position where in Weeks 14-16, they'll be fighting for a playoff spot but not guaranteed, so they'll be relying on him when it matters most. Players going into their second years seem primed to explode and build off of what they did as rookies, so in Martin's case, I think that he could be lining up to have a 18-20 touchdown season. Like I said, I don't want to draft you for what you did, but what you're going to do for me now.

I think that Martin had the absolute best floor of the top four players available, and I think he could also have the highest ceiling. For that reason, I decided to take Martin with the number one overall pick in our SBNation Fantasy Football Writers Draft.

Some notes from Sander Philipse of Bucs Nation:

Peyton Hillis isn't getting a lot of reps, and sixth-rounder Mike James is likely to win the backup running back job. Brian Leonard seems poised to be the third-down back. Kevin Ogletree has the lead on the third receiver job, but Chris Owusu has had an outstanding camp and may be a good very late-round sleeper.

Jackson is one of my favorite players if only because he can make catches unlike any other. But he also has caught just 50.4% of his targets over the last two seasons from Philip Rivers and Freeman.

As long as he edges near 10 yards per target, Jackson's value will be fine. It's when he's not making phenomenal one-handed 50-yard touchdown catches that he becomes a liability. Still, even as Freeman struggled last season, Jackson remained fairly valuable in fantasy.

He had at least 80 yards in five of the last seven games.

Speaking of suddenly losing all your value ...

But in one of those years, his yardage dropped from over 15 yards per catch to under 12 yards per catch. He had just three touchdowns in 2011 and his value sunk. That's how thin the line is between valuable and costly in the NFL.

When this publishes, final cuts may have been announced. Sander sent me those notes a couple of weeks ago and Owusu has fallen behind a few others.

Either way it wouldn't have mattered. None of these players are likely to matter in fantasy, though Underwood and/or Ogletree could be in the 300-500 yard range.

Veteran Dallas Clark had 47 catches for 435 yards last year, but was not retained. Though the sample size was small, Stocker didn't really do anything in 2012 to show that he was a budding star waiting for a chance to shine. At least, not in terms of receiving.

The Bucs are hoping that he just needed an opportunity, but it's also possible that unlike the way most teams are trending, Tampa Bay won't be using a lot of the tight end in the passing game. They've got plenty of other weapons.

This is the interesting one, because Football Outsiders noted that as far as run defense goes, the 2012 Tampa Bay Buccaneers were one of the best they've ever recorded. This coming from a team that finished 29th in total defense and 23rd in scoring defense. But they allowed the fewest rushing yards -- was it only because everybody wanted to pass it on them?

Partially. But they also allowed the fewest yards per carry and only four times did a team top 100 yards rushing against the Bucs. Pass defense was another story.

Add in Revis, Dashon Goldson, and Johnthan Banks and what do you have? Well, it certainly sounds pretty, but I don't like to jump to conclusions unless I either get to see it first or you've got one of those Jump-to-Conclusions mats from Office Space.

If they really did sign, trade, and draft an elite secondary, then the Buccaneers defense could be reminiscent of the ones they trotted out in the Monte Kiffin/Tony Dungy era. The biggest concern is that they had just 27 sacks and a third of those signed with the Seahawks. (Michael Bennett, nine sacks.)

As a team defense, it's not bad. It's probably worth a flier because the run defense was so good, Revis is really good, and hey they play the Jets in Week 1. Not a bad way to start your season.

I'd buy that for a dollar.

• The easiest players to root for