The last six seasons in New Orleans have been something to behold, and the seventh will likely provide more of the same. Could there be any sleepers on the Saints, or will it be the same "boring" 30 points per game?

To say that something is "fantasy heaven" seems redundant, but these are the times and that is the New Orleans Saints since Drew Brees and Sean Payton arrived. Sometimes I like to think of Brees as Johnny Moxon and Payton as his dad that never cut it and is trying to live vicariously through Mox.

Except that in this case, Mox is perhaps the most prolific passer in NFL history. And now you're picturing Payton with whip cream. Well, that's how it happened in my copy of Varsity Blues!

Brees, who may yet have another seven seasons left of being an NFL starter, has led the league in passing yards in four of the last seven years. He has three of the top five passing yards seasons in NFL history, including the record of 5,476 in 2011. After Dan Marino turned 28, he had just two more seasons over 4,000 yards.

In 2006, the Saints hired Payton, signed Brees (who teams were passing over for a should injury that has never resurfaced), drafted the likes of Reggie Bush, Marques Colston and Jahri Evans, and enlisted offensive line expert Doug Marrone to run the offense.

The Saints went from 31st in scoring to fifth. They have won a Super Bowl, set records, made stars, seen Marrone now become the head coach of the Bills and made fantasy owners salivate over the possibilities of every young player that gets an opportunity to play with New Orleans. This year, that's happening now that nobody knows for sure who will step up as the third receiver.

That is one of the few questions on offense. Defense? Eh, that's another story.

Here is a closer look at one of the greatest units of football ever put together. Drew, I don't want, your life. 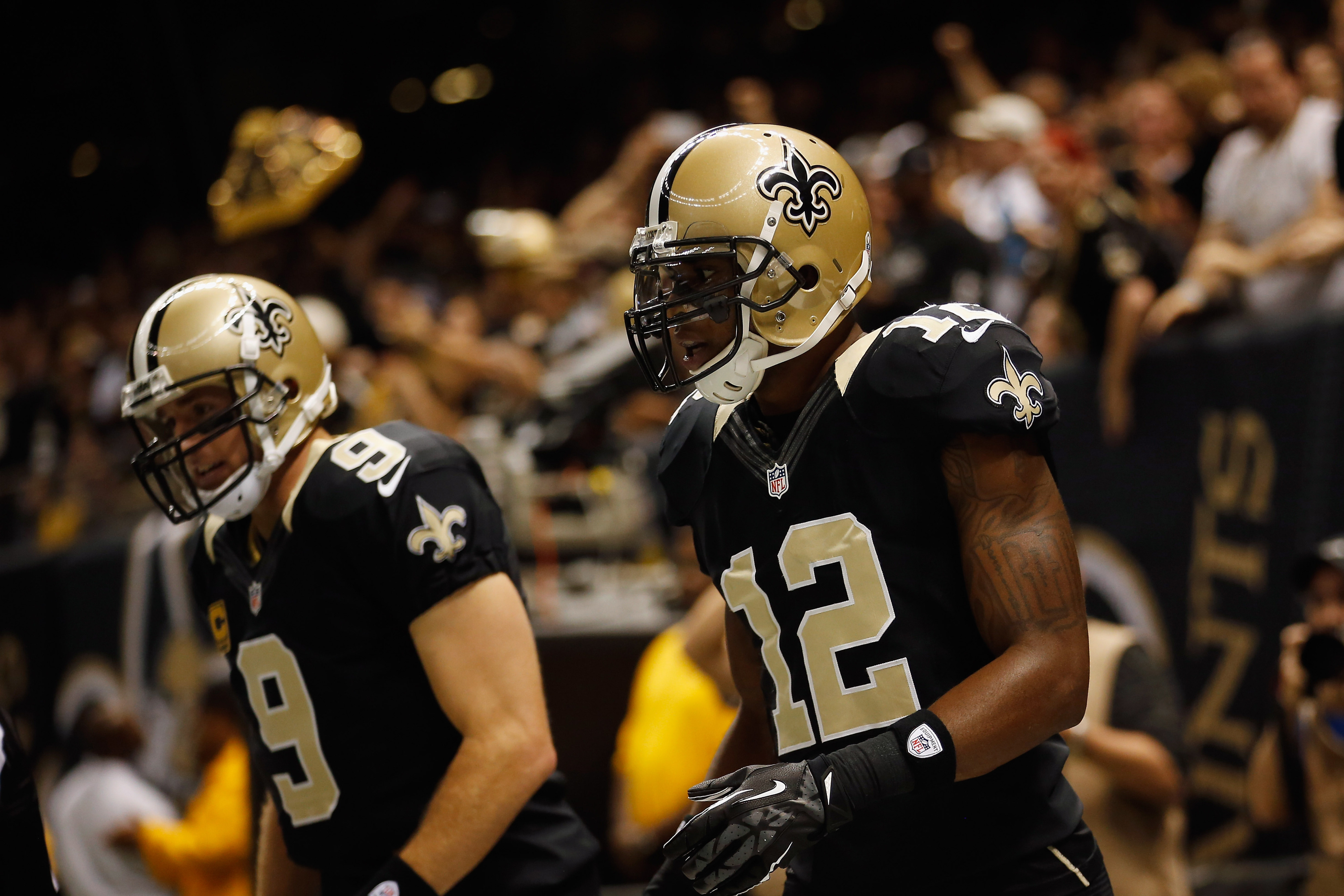 He has led the NFL in touchdown passes in four of the last five seasons. He is sixth all-time in passing touchdowns and likely won't get higher than fifth any time soon. Though he is only 18 behind Fran Tarkenton, he also trails active players Tom Brady and Peyton Manning, while first all-time Brett Favre is 184 ahead of him.

It might take Drew a couple of years to throw 184 touchdowns. Just a couple.

He has thrown 89 of them in the last two seasons, along with an unfathomable 10,663 yards. If he gets a knock anywhere, it's that he has also thrown a lot of interceptions, including a league-leading 19 last year. That will happen when you throw that much, and most fantasy leagues don't ding interceptions enough to make it matter.

Though, admittedly, it was much nicer in 2011 when Brees had 46 touchdowns and 14 interceptions. When you throw two touchdowns and one pick, it normally takes you down from 12 points to 10, and that could be the difference in winning or losing. But Brees almost always makes you more likely to win.

Look at those numbers up above ... that's a down year for Drew Brees.

Passed over because concerns about his shoulder, Brees has missed one game in the last seven seasons; Payton sat him in a meaningless Week 17 game in 2009.

This is a true committee and  there's no reason to break them down individually.

Ingram is the goal line back, the workhorse (you'll remember that role from Varsity Blues, but this might be the opposite since Ingram mostly gets the ball when it's time to punch it in). He has mostly disappointed fantasy owners since he came out of Alabama. You would have expected more than five yards per carry and hopefully more touchdowns, but that's just not how this offense operates. And considering how good this offense is, why change that now? Ingram should be good for 600-700 yards, maybe 800 if he gets it up to five yards per carry, and five touchdowns.

Thomas is the better all-around back, by far. You can put him in there on third downs and trust that he'll be able to catch the ball if necessary. This is a talented open-field player who has never rushed for 800 yards in a season, but he's caught 50 passes before. He also had 12 total touchdowns in 2008. Those touchdown days look to be behind him, but overall you can expect 1,000 total yards and five touchdowns.

Sproles is the do-everything scat back who returns punts, kicks, will carry it a few times and catch it a lot of times. He disappointed fantasy owners last year when he dropped from an unbelievable 2,696 all-purpose yards to just 1,577 all-purpose yards, but in a PPR league he was still quite valuable. He could catch 100 passes, score a touchdown four different ways and be the ultimate secret weapon as a W/R/T option.

Together, they form ... the ... Saints!?  I'm not good with coming up with superhero names. But this is a good team, that unfortunately is a little too unpredictable to rely on week-to-week in fantasy.

Cadet was a preseason surprise in 2012 who made the team. Robinson is the 2013 surprise.

Here's a 6'4, 225-pound receiver who catches everything and can move so well for a big man, but because he went to Hofstra falls to the seventh round? The Saints just know what they are doing with scouting ever since 2006, and it's easy to forget that the same year they got Brees, they got Colston.

He's never exploded for a huge season (career highs of 98 catches, 1,202 yards, and 11 touchdowns came in 2007) but he's reliable and probably will remain that way for another five or six years. And there's always the possibility that he does go off for a 1,500-yard season or at least catches 100 passes.

The seventh round? How about undrafted? Moore went to Toledo and weighs less than a buck-eighty, but has remained quite productive since -- you guessed it -- signing with the Saints in 2006. Well, he didn't really integrate into the offense fully until 2008, but he has witnessed this entire transformation. Last year, he came out for career highs in yards and yards per catch.

That's why it's important to remember that it was a career season in those respects, and I'd dial down the yards per catch.

Devery Henderson left via free agency. Joe Morgan was forced to the sideline by a torn meniscus. Now what? That's the question that a lot of people have been asking themselves all offseason, but the Saints have some interesting options.

Toon was a fourth-round pick last year and then placed on IR before the season. The potential is there, but we haven't seen it on the field during the regular season.

Tanner went undrafted in 2010 and has been on and off the roster multiple times since.

But Stills is probably the one to watch. The fifth-round draft pick has nine catches for 170 yards in the preseason and could emerge as the new deep threat in New Orleans. To be fair, Toon's numbers are almost identical, but new is shiny and shiny is shiny. Then there's the reality of the situation:

The Saints already have three players who could go over 1,000 yards. Henderson had 316 yards last season. The fourth receiver is Sproles. There is the fact that Moore has an extensive injury history, but you can't draft Stills or Toon. You just need to keep an eye on them.

If you're surprised by Graham's placement as eighth among tight ends in defense-adjusted yards above replacement, you'll notice that he's a heavily targeted player who caught just 63 percent of his targets. That's a good number for a receiver, but tight ends are often above 70 percent. Part of the reason that Graham's catch rate is lower could be that he's more of a deep threat than most tight ends, but his yards-per-target number is also not extraordinarily high.

Rob Gronkowski caught 69 percent of his targets for almost 10 yards per target. There's a big difference there.

Names of no consequence.