How to ruin a fantasy mock draft

Mock draft ruining is not for the faint of heart or the weak-willed. You need to be willing to waste the time of complete strangers. You have to be okay with taking abuse from guys named "Derek74," or "RedskinPride19." You must be fearless and have an indomitable spirit. In short, you have to be a stone cold killer. It’s not something that comes naturally to everyone, but that’s where this guide comes in. Here are some tips that will hopefully set you on the path towards ruining your very own mock draft.

A suitable team name is essential. At the bare minimum, it should relate to sports in some way. You also want it to be funny, but not too funny. Try to stay away from names like "J.J. Watt’s Happening?" I know it’s hilarious because it sounds like "what’s happening" and also a popular NFL player, but you’re better than that. Here’s a quick step-by-step guide to naming your mock draft team:

Incredibly hilarious, but it has nothing to do with sports.

There’s the sweet spot. This name combines a sports thing (football) with a funny thing (butt).

Even when ruining mock drafts, it’s important to be polite. If you’re nice to your fellow drafters, you’re more likely to receive a funny reaction when you pick a third-string QB first overall. And believe me, I know that some of you are probably reading this and thinking, "This guy is a major league jerk." I get where you’re coming from. But let me ask you; in this scenario, who’s the real jerk? 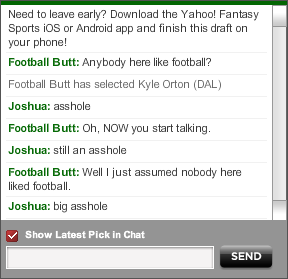 Okay, so this next tip may seem obvious, but it’s perhaps the most integral to the mock draft ruining process.

Let me give you a few basic examples: 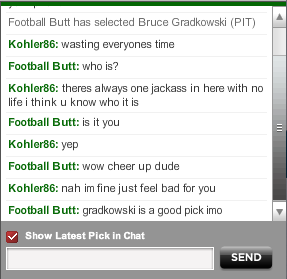 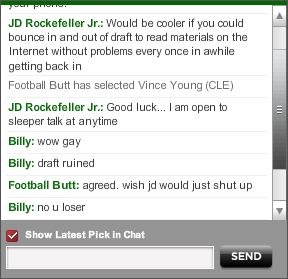 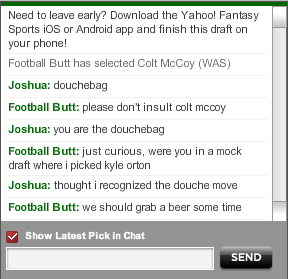 I never heard back from Joshua, which was a real shame. It’s not just picking backup QBs that ruins mock drafts. Sometimes it’s the rudeness of others. Josh, buddy, if you’re reading this… I forgive you.

Tip 4: Don’t be afraid to mix things up once in a while.

Here are a few ideas: 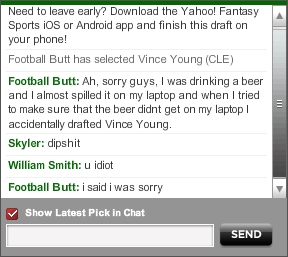 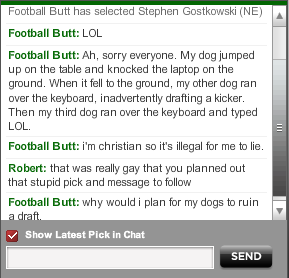 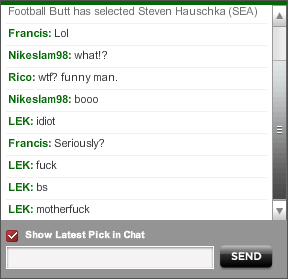 Try joking around about how funny it would be if you drafted a kicker, then draft a kicker. 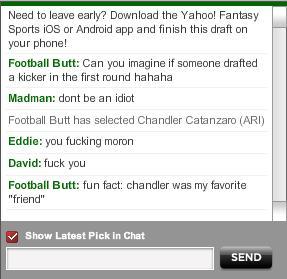 This goes back to what I said earlier about politeness. These guys are practicing for fantasy football drafts that are probably a month away, so obviously their time is precious. Do them a favor and give an advance warning. More often than not, they’ll appreciate the heads up. 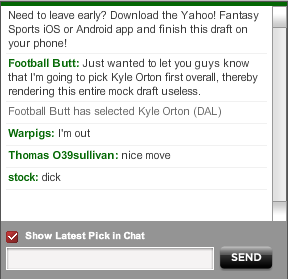 Tip 6: Lull them into a false sense of security.

Let them know that you’re not some jackass that ruins mock drafts for fun, then ruin the mock draft for fun. 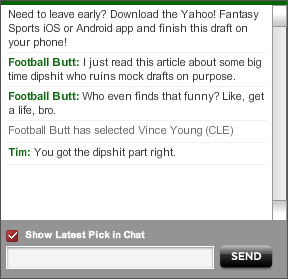 Similar to Tip 6, but this time you’re talking about a specific player. The other drafters will be like, "Ah, nice, there’s no way he’ll pick that player now." Guess again, dude. 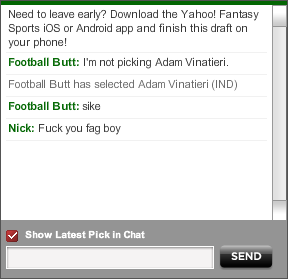 Tip 8: Move outside your comfort zone – give the auction draft a try. 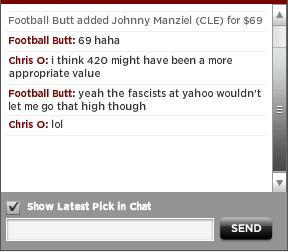 So it turns out that auction drafters are pretty chill. Chris is a million times cooler than Joshua. I don’t forgive you anymore, Josh. Screw you.

My final tip is classified as an advanced maneuver. Only attempt this if you’re absolutely sure you’ll be able to handle it.

Tip 9: Control two teams at once.

I gave my second team an innocuous name, so as not to arouse any suspicion. Why would somebody named Mock Draft Dude ruin a mock draft? It goes against his very nature ... or so you would think. 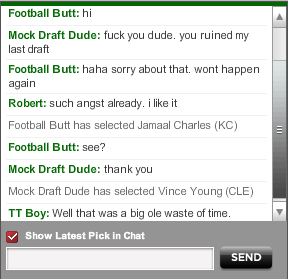 Look, I don’t want to degrade the concept of art, but ruining mock drafts is pretty much definitely an art form. And as with all forms of art, if you reference an online guide, it’s actually really simple to pick up and become incredibly skillful. So go forth, my friends, and ruin mock drafts. Just remember, if all else fails, draft a kicker. And if you see Josh, tell him he’s a dick. 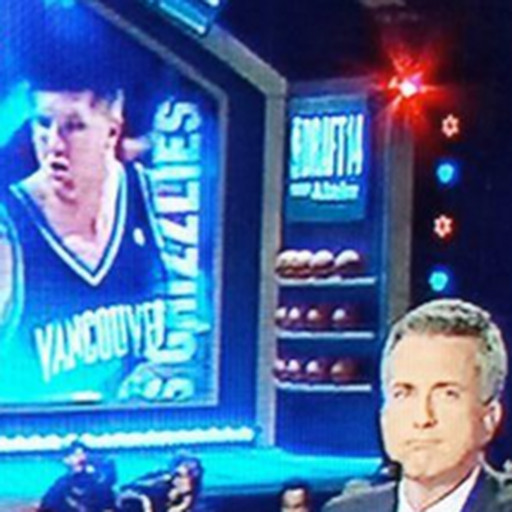 Stefan, who goes by the name @boring_as_heck on Twitter, is a ruiner of mock drafts and a comedy person from Canada.